By the grace of Allah عَزَّوَجَلَّ, Dawat-e-Islami has conveyed its Madani message to almost 200 countries of the world. It is also rendering services to Sunnah in more than 103 departments. Please have glimpses of the Madani activities of a few departments:

Efforts of the Majlis Khuddam-ul-Masajid

By the grace of Allah عَزَّوَجَلَّ, Dawat-e-Islami is not only a “Masjid-filling movement” but also a “Masjid-making movement”. Due to the non-observance of Islamic teachings among the Muslims, many Masajid had been permanently locked in several villages etc. Reaching such villages, the Madani Qafilahs of Dawat-e-Islami opened those Masajid, cleaned them and conveyed call to righteousness to the locals, making them attend those Masajid. Moreover, fulfilling Islamic and legal requirements, the Majlis Khuddam-ul-Masajid of Dawat-e-Islami is busy building Masajid in the areas where there is a need. These Masajid are constructed at suitable sites. By virtue of the efforts made by this Majlis, more or less 2000 Masajid have so far been constructed within and outside Pakistan. Moreover, until the time of writing this news, more or less 510 Masajid are under construction in Pakistan alone. After the completion of the construction work, these Masajid are inaugurated from time to time and five times congregational Salahs are started there. Mentioned here is a list of the Masajid inaugurated in March 2017 under the supervision of the Majlis Khuddam-ul-Masajid: Faizan-e-Jamal-e-Mustafa Masjid at Bari Imam area in Islamabad * Faizan-e-Aal-e-Barakaat Masjid at Najeebi Plaza Mobile Market Abdullah Haroon Road, Sadar Bab-ul-Madinah, (Karachi) * Faizan-e-Khadeejat-ul-Kubra Masjid at Makkah city Malir Bab-ul-Madinah, (Karachi) * Madinah Masjid in Madinah-tul-Awliya Multan * Jam-e-Masjid Ashraf and Jam-e-Masjid Faizan-e-Ghaus-e-A’zam in Orangi Town Bab-ul-Madinah, (Karachi).Furthermore, the foundation stone of Jam-e-Masjid Faizan-e-Ghaus-e-A’zam and Madrasa-tul-Madinah was laid in Islamabad, whereas the construction work of Faizan-e-Jamal-e-Mustafa Masjid was started in Baagh-e-Attar (Kala Baagh, district Mianwali) Punjab, Pakistan.

A Sunnah-inspiring Ijtima was held by Dawat-e-Islami’s Majlis for “Special Islamic brothers” at a local hall in Musa Lane area of Bab-ul-Madinah, (Karachi) in which a member of Shura delivered a Sunnah-inspiring speech. This Ijtima was attended by a large number of “Special Islamic Brothers” (i.e. the speech-impaired, the visually-impaired and the hearing-impaired). Moreover, normal Islamic brothers and a member of the Sindh assembly, Jawed Nagori, also attended it.

Maktaba-tul-Madinah, the publishing department of Dawat-e-Islami, not only publishes books and booklets and sells them at low prices but also sets up its stalls from time to time at different book fairs within and outside Pakistan with the purpose of promoting the call to righteousness.  The stalls of Maktaba-tul-Madinah were set up at the international book fairs held in Masqat – the capital of Oman – in February, 2016 and February, 2017; and in Sharjah (UAE) in March 2017. These stalls were also set up in the book fairs held at Expo Centre Karachi and Agricultural University Sardarabad (Faisalabad) in December 2016 and in March 2017 respectively. Books and booklets in different languages, released by Maktaba-tul-Madinah, were made available at these stalls which were visited by thousands of Islamic brothers, as a whole. Different booklets were distributed among the visitors and call to righteousness was also conveyed to them.

In Jumadal-Ukhra 1438, March 2017, fifty two different Madani courses were offered in Pakistan by Majlis Madani courses including 7-day Faizan-e-Namaz course, 12-day Islah-e-A’maal course and 26-day Madani work course. As a whole, the number of attendees was1053.

اَلْـحَمْـدُ لـِلّٰـه عَزَّوَجَلَّ! In the Madani environment of Dawat-e-Islami, along with other righteous deeds, people are also encouraged to observe supererogatory fasts. One Madani In’aam, mentioned in 72 Madani In’amaat booklet bestowed by Shaykh-e-Tareeqat Ameer-e-Ahl-e-Sunnat, دَامَـتْ بَـرَكَـاتُـهُـمُ الْـعَـالِـيَـهْ  is about observing fast either on Monday or any other day in a whole week. . In order to propagate the blessed deed of supererogatory fasts, Sahri Ijtima’at are frequently held especially in the sacred months of Rajab and Shaban. Right after Isha Salah, Sunnah inspiring Bayan is started, Salat-al-Tawbah (the Salah of repentance) is performed, Islamic brothers do Fikr-e-Madinah (Assessing deeds whilst filling the blanks given in the pocket-sized Madani In’amaat booklets), sleeping and waking up Sunnah and its decorum are delivered then there is a rest break.  Approximately, one hour and 19 minutes prior to the end time of Sahri, Islamic brothers are woken up; they listen to the virtues of offering Tahajjud Salah etc. Then Tahajjud Salah is performed thereafter supplication. After the Fajr Azan, Islamic brothers call out Sada-e-Madinah i.e., they wake up the Muslims for Fajr Salah. After having performed Fajr Salah, Madani Halqahs (consisting of recitation of Glorious Quran with Tarjuma and Tafseer, 4 pages from Faizan-e-Sunnat and Shajarah etc.) are conducted until there is a time of Ishraaq and Chaasht which is followed by Salat-o-Salaam, the last spiritual recitation. Until now (12 Rajab-ul-Murajjab 1438), in Markaz-ul-Auliya (Lahore) alone, 211 Sahri Ijtima’at have been conducted, attended by thousands of Islamic brothers collectively.

Upon the completion of the study period of 2016-17, the result announcement ceremony of Islamic schooling system Dar-ul-Madinah (The incredible combination of both Islamic and worldly education) was conducted on the 29th and 30th of March. On the auspicious occasion,   Madani children recited Hamd and Naat in a graceful manner as well as they presented lovely Madani Khakay performance. For 100% attendance, 206 Pre-primary students whereas 271 Primary students were conferred with certificates. Upon the best educational performance, 2215 Pre-primary students whereas 1479 Primary students were awarded with Academic excellence certificate. اَلْـحَمْـدُ لـِلّٰـه عَزَّوَجَلَّ! Since 10 April 2017, new educational year has been initiated.

Miscellaneous courses: For the Tarbiyat of Islamic sisters about Fiqh, Tajweed, Mohlikaat, Maamlat, 12-day ‘Islami Zindagi course’ from 15th March 2017, was held in the following cities: Babul Madinah (Karahi), Sardarabad (Faisalabad), Gulzar-e-Tayyibah (Sarghoda), Rawalpindi, Gujrat and Zamzam Nagar (Hyderabad), attended by approximately 193 participants. ³ A 12-day “Special Islamic sister course” was conducted in Karachi [Pakistan] which started on 31st March, 2017. The course was offered to those Islamic sisters who have the yearning for carrying out Madani activities amongst the special Islamic sisters (mute, hearing-impaired and blind Islamic sisters) ³ Starting from 31st March, 2017, a 12-day “Faizan-e-Namaz” course was conducted in Faisalabad, Sargodha, Gujrat and Hyderabad for teaching basic laws of Fiqh, Tajweed and Salah. About 117 participants attended the course.

Madani activities: Through Majlis Rabitah, efforts are being made to convey the Madani message of Dawat-e-Islami to the Islamic sisters. Madani Halqah was arranged at the residence of an Islamic sister in Karachi. Bint-e-Attar سلمھا الغفار [daughter of Ameer-e-Ahl-e-Sunnat] specially attended the halqah and provided the Islamic sisters with Madani pearls.

For conveying the Call to Righteousness, a Madani Qafilah travelled from Baghdadi Kabinah Bradford (UK) to Denmark. By the blessing of Madani Qafilah, many Islamic brothers made the intentions of adorning their heads with Imamah [Islamic turban], studying in Madrasa-tul-Madinah Balighaan [for adults], and participating in other Madani activities.

Situated within the premises of the mausoleum of Sayyiduna Khuwajah Ghareeb Nawaz رَحِمَهُمُ الـلّٰـهُ تَـعَالٰی is Masjid Akbar in Ajmer, Hind in which a member of Shura from Hind delivered a Sunnah-inspiring speech attended by a large number of devotees of Rasul. The member of Shura, accompanied by Islamic brothers, visited the blessed tomb and recited the “Fatiha” as well.

A Madani Qafilah travelled from Oslo, Norway, to Lithuania, Europe, promoting the call to righteousness there. Moreover, six Madani Qafilahs of the devotees of Rasul travelled for 12 days in Tanzania.

On the occasion of the inauguration of Faizan-e-Ghaus-e-A’zam Masjid, an Ijtima-e-Zikr-o-Na’at was held by Dawat-e-Islami’s Majlis Khuddam-ul-Masajid in Bologna, Italy. The Ijtima was attended by a large number of Islamic brothers.

For conveying the Call to Righteousness, a Madani Qafilah travelled from Baghdadi Kabinah Bradford (UK) to Denmark. By the blessing of Madani Qafilah, many Islamic brothers made the intentions of adorning their heads with Imamah [Islamic turban], studying in Madrasa-tul-Madinah Balighaan [for adults], and participating in other Madani activities. 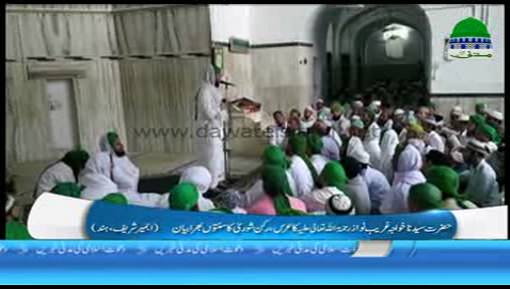 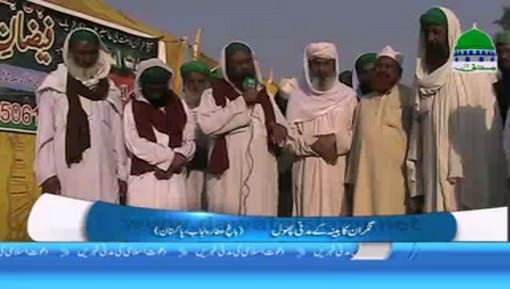 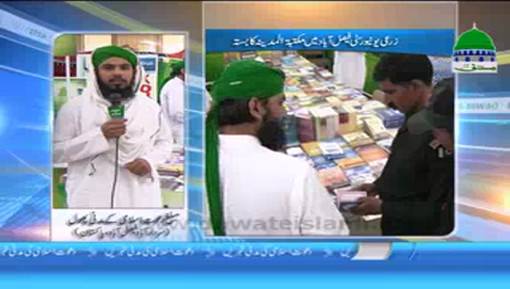 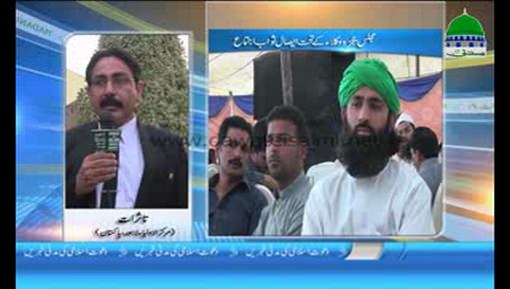 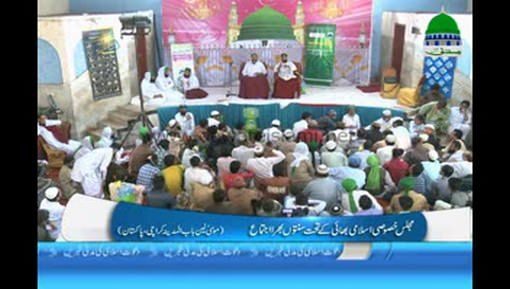 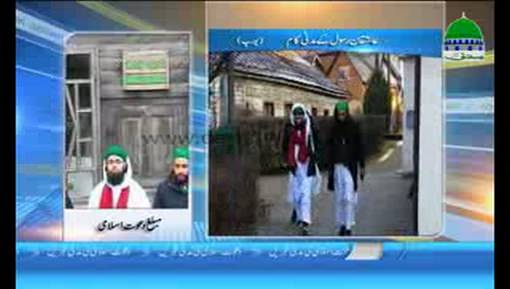 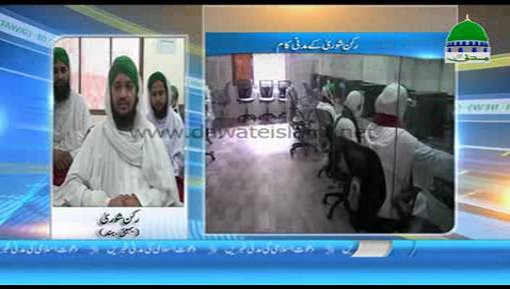 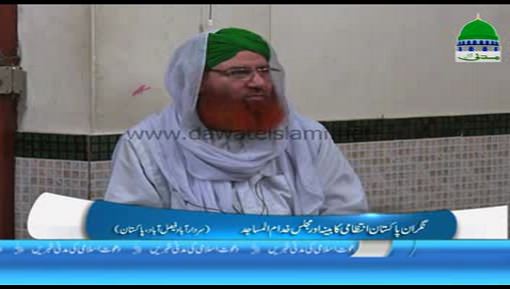 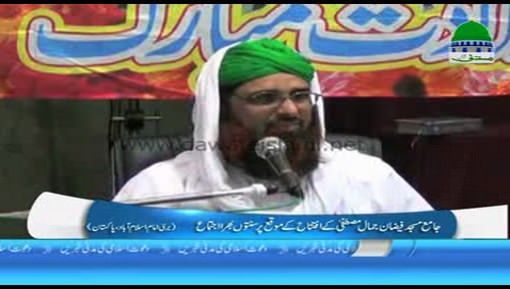 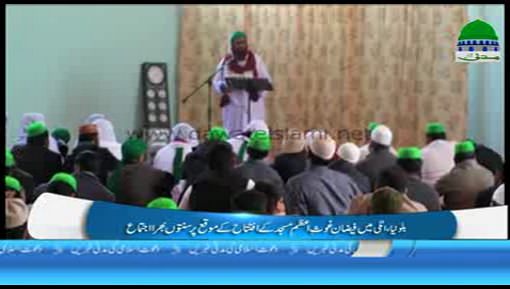 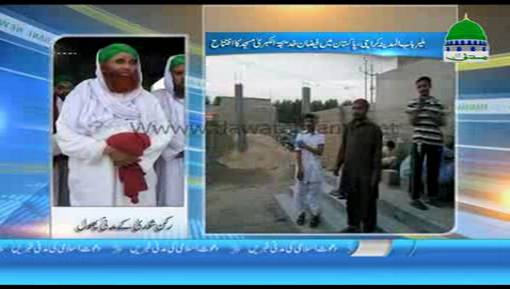 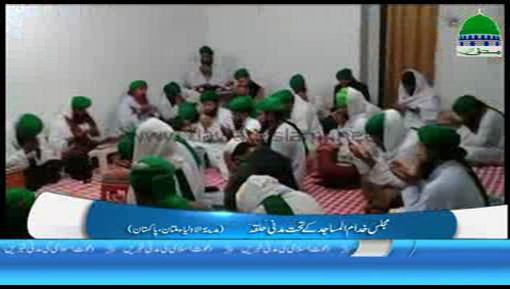 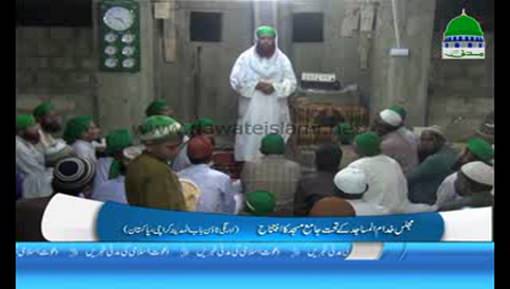 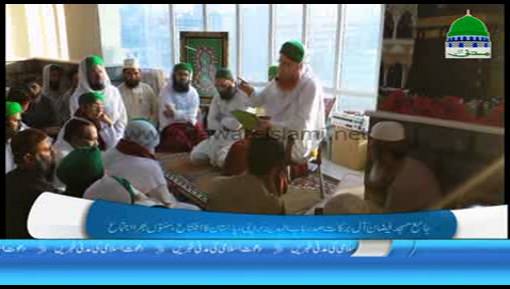 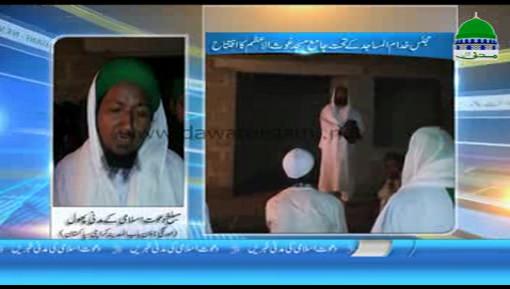 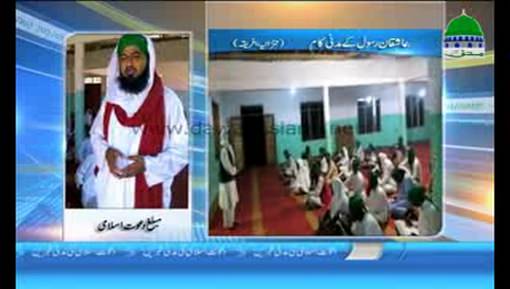 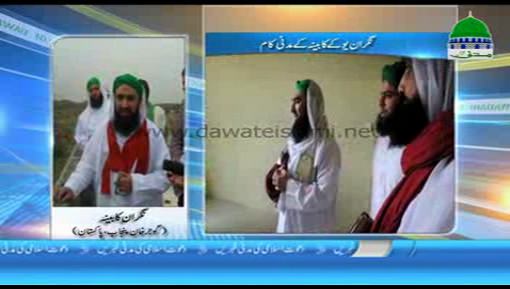 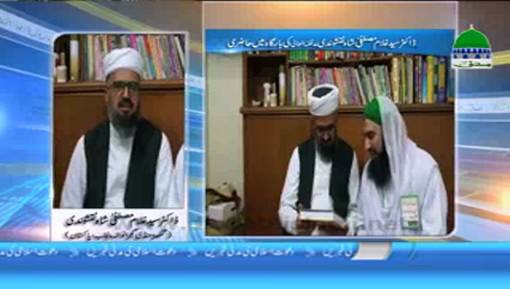 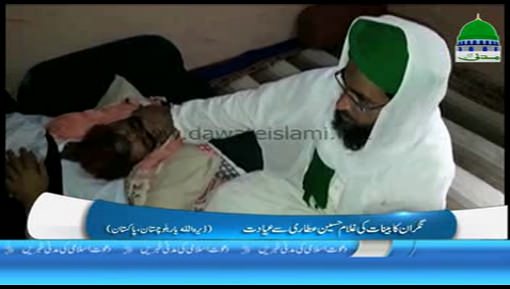 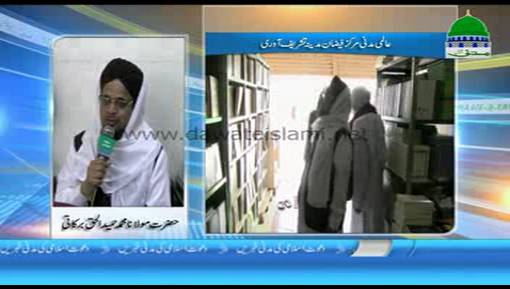 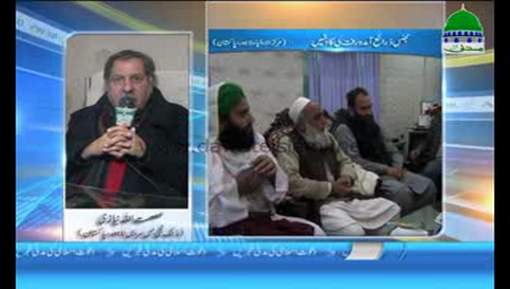 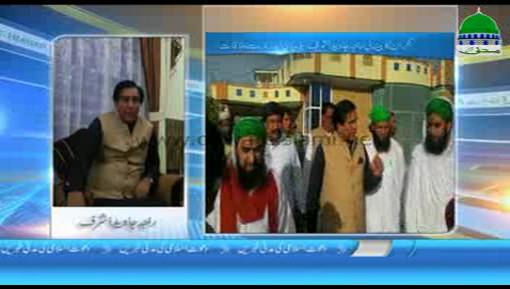 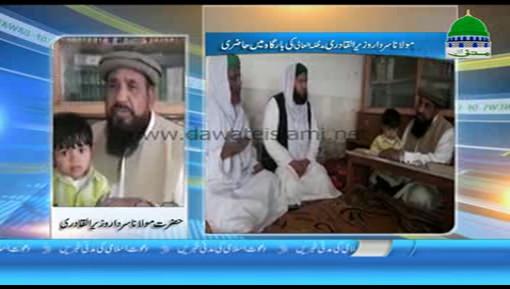 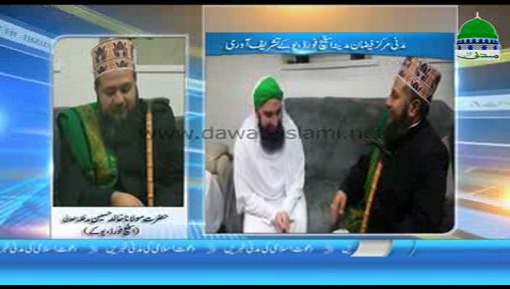 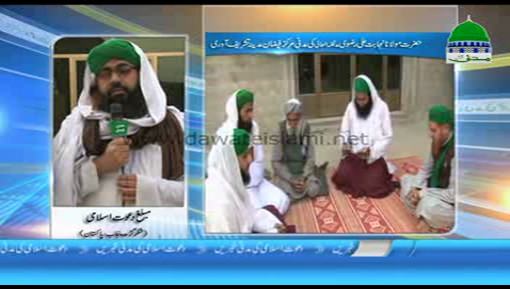 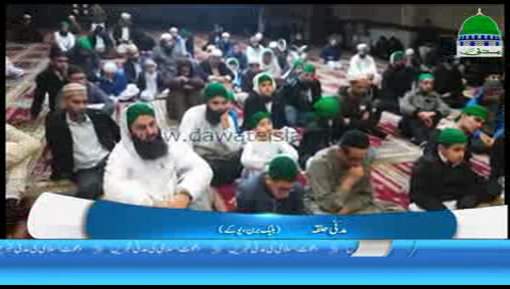 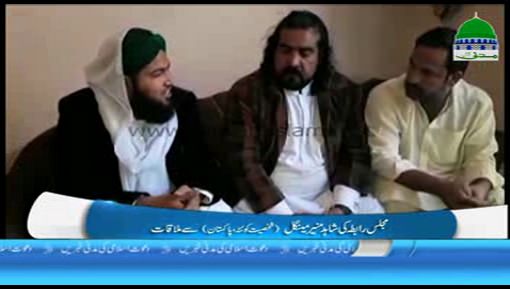