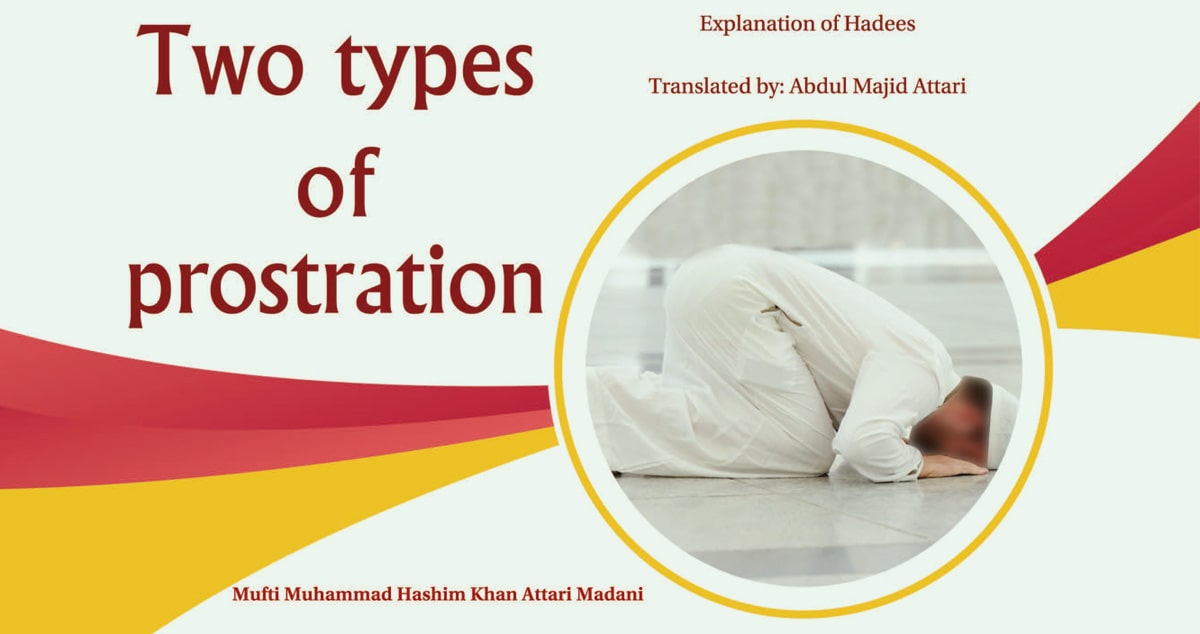 In the light of this Hadees, two points have become clear:

1     If it were allowed to perform the prostration of veneration [i.e. respect] to anyone in creation, then a wife would be commanded to perform prostration to her husband because a husband has a lot of rights over her which she is unable to fulfil. This blessed Hadees also places great emphasis on the fact that it is Wajib for a woman to obey her husband.

Ruling on performing prostration to anyone other than Almighty

There are two types of prostration:

It is stated in Fatawa Hindiyyah: One who performs the prostration of veneration to any ruler will not become a disbeliever. However, he will be a sinner for the reason that he has committed a major sin. If he performs the prostration considering it an act of worship, then he will become a disbeliever, as is stated in the book ‘Jawahir-ul-Ikhlati’ [جواہر الاخلاطی]. (Fatawa Hindiyyah, vol. 5, pp. 368, 369)

Fatawa Razawiyyah states: Prostration of worship to anyone other than the Almighty is polytheism. Although prostration of veneration is not polytheism, it is Haraam and a major sin. Based on Mutawaatir Ahadees and Mutawaatir proofs from Islamic jurisprudence, prostration of veneration has been proved to be Haraam. In our Fatwas, we have stated forty Ahadees, proving it to be Haraam. Proofs from Islamic jurisprudence in this regard are too many to be counted. It is stated in Fatawa ‘Azeeziyyah: There is the consensus of the Ummah on it being Haraam. (Fatawa Razawiyyah, vol. 22, pp. 565)

Three Ahadees about prostration of veneration being Haraam

2     Sayyiduna ‘Ali کَرَّمَ اللّٰەُ وَجْھَـهُ الْکَرِیْم stated: During his disease before his blessed demise, the Revered and Renowned Rasool صَلَّى اللّٰەُ تَعَالٰى عَلَيْهِ وَاٰلِهٖ وَسَلَّم said to me, “Let people come to me.” Therefore, I granted permission. When people came to his court, he صَلَّى اللّٰەُ تَعَالٰى عَلَيْهِ وَاٰلِهٖ وَسَلَّم said, “May curse from Allah عَزَّوَجَلَّ be upon every such nation that has declared the graves of their Ambiya عَـلَيْـهِ الـسَّـلاَم to be the places of prostration.” (Musnad Bazzaar, vol. 2, pp. 216, Hadees 605)

3     The Holy Nabi صَلَّى اللّٰەُ تَعَالٰى عَلَيْهِ وَاٰلِهٖ وَسَلَّم has said: “Among the worst people are those who declare graves to be the place of prostration.” (Musannaf ‘Abdur Razzaq, vol. 1, pp. 307, Hadees 1588)

1     I swear by the One under Whose power the life of Muhammad (صَلَّى اللّٰەُ تَعَالٰى عَلَيْهِ وَاٰلِهٖ وَسَلَّم) is! A woman will not fulfil the right of her Creator unless she fulfils all the rights of her husband. (Ibn Majah, vol. 2, pp. 411, Hadees 1853)

2     When a woman causes discomfort to her husband in the world, the big-eyed maidens of Heaven[1] say, “May Allah عَزَّوَجَلَّ punish you! Do not cause discomfort to him. He is as your guest. Soon he will get separated from you and will come to us.” (Sunan-ut-Tirmizi, vol. 2, pp. 392, Hadees 1177)

Pieces of advice from Sadr-ush-Shari’ah

The legendry scholar of Shari’ah, Mufti Amjad Ali A’zami رَحْمَةُ اللّٰەِ تَعَالٰی عَلَيْه stated: These days, discord among a wife and a husband is a common complaint. The husband complains of his wife and vice versa. One has becomes a pain in the neck for the other. Life becomes very unhappy, bringing about very harmful effects. Marital discord destroys one’s worldly life as well as afterlife. This discord not only affects their own life badly but also causes harmful effects to their children. Children no longer have respect for their parents in their hearts. A big cause of discord is that both of them do not care about the rights of each other. Nor are they considerate towards each other. The husband sees his wife as someone even inferior to a slave-girl and the woman wants her husband to remain as her slave. They want every wish and whim to be fulfilled and nothing to be rejected no matter whatever happens. If they have these types of bad thoughts, how can they live a happy life together? As a result, they fall out with each other day and night, mistreating each other and eventually destroying family life. The Holy Quran states: ‘اَلرِّجَالُ قَوّٰمُوْنَ عَلَى النِّسَآءِ’ Men are guardian over women”. This shows the superiority of men. Similarly, it is also stated: ‘وَ  عَاشِرُوْهُنَّ  بِالْمَعْرُوْفِۚ-’ and deal with them kindly”. This  shows that men must treat their wives nicely.

Men and women both should get knowledge about the rights of each other and should fulfil them. Just demanding the fulfilment of one’s own rights ignoring those of the other is the root of all discord. Putting up with improper and unkind words of each other is quite essential. If one of them ever treats the other unfairly, then the other should not get involved in the quarrel. On such an occasion, one is prone to get stubborn, turning a normal situation into a bad one. (Bahar-e-Shari’at, vol. 2, pp. 99, 100)

[1] Beautiful maidens of Heaven will serve pious people/men in Heaven.