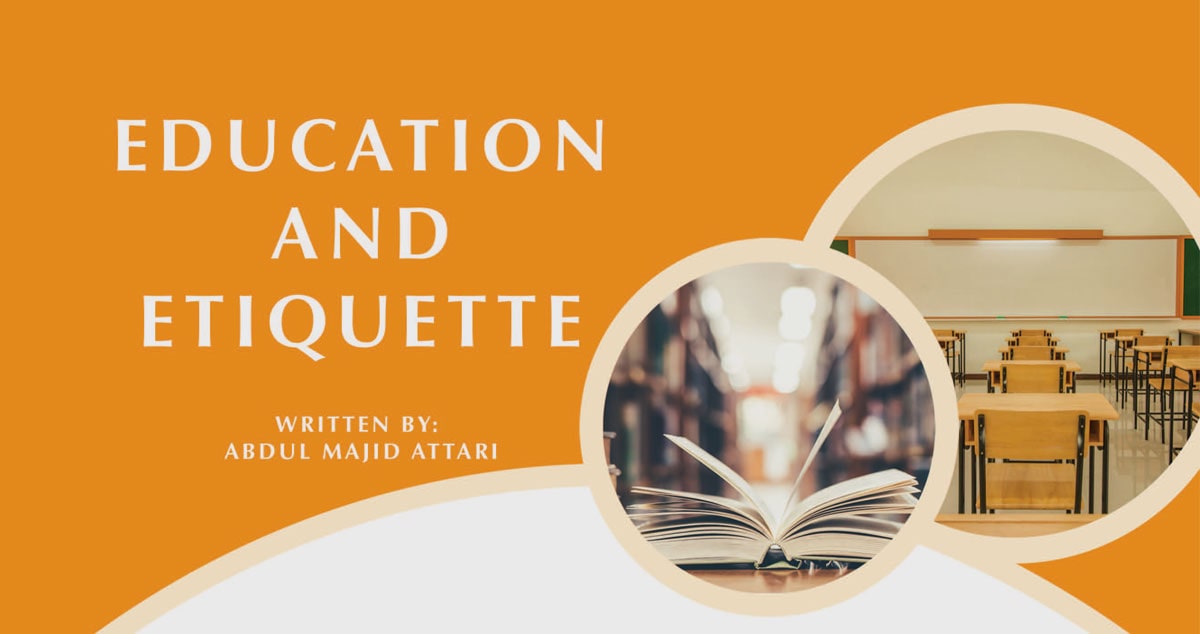 In modern times, it’s an obvious fact that people around the globe give topmost priority to education. Different countries and societies have different educational systems, depending upon their requirements, resources, religion, culture and social norms. Since the acquisition of high-quality education along with professional skills and abilities normally paves the way for a bright future and a brilliant career, everyone seems to be immensely interested in it. In other words, people focus on education simply because it helps with career-building. On the other hand, what many people seem to be neglecting is character-building. Sometimes, sorry to say, some so-called educated people are reported to have committed various types of crimes and immoral acts. In spite of being formally educated, they indulge in corruption, deception, usurpation, bribes, fraud, cheating, lying, etc. What is the cause of this gross misconduct, after all? Of course, there might be many reasons but negligence in character-building during student life cannot be ruled out.

First and foremost, family background and environment deeply influence the character and manners of a student. With a certain personal and psychological attitude ingrained in him by his family environment, a student joins an educational institution where he has to socialize with others. Obviously, if excellently brought up by his family, he behaves nicely towards others but if there is something lacking in it, he may misbehave towards other students, ultimately having a bad effect on their attitude.

Many parents must have observed that their kids indulge in certain bad habits after they have joined some institution. Admittedly, every institution cannot be taken to task. There must be good institutions that ensure that which students have a good character along with quality education. However, it’s also an undeniable fact that sometimes a student is introduced to any evils for the first time in his life in some institution. Therefore, parents should guide their kids from an early age on how to stay away from bad kids in the institution.

Curriculum also plays a vital role in character-building. Sowing bad seeds will produce bad fruits. Similarly, teaching immoral and unethical topics to students in the name of literature and language will destroy their manners. On the contrary, in addition to technical topics, if the curriculum also contains such topics as love for and loyalty to Islam, honesty, sincerity, bravery, fulfilment of duty, patriotism, etc., it will hopefully help in developing a good character in students.

Another factor that might cause a bad effect on the character of students is the misuse of mobile phone and social media. No doubt, a mobile phone is a very useful device itself. If properly used, it can produce fruitful results but the sad fact is that a great number of students waste their time by misusing mobile phones and the internet. Watching indecent things, playing improper games on a mobile phone, etc. are only some of its many misuses. Of course, these goings-on will distract students from their real purpose, i.e. the acquisition of education. Therefore, in order to avoid all these risks, one should nip the evil in the bud and do what is best for his worldly life as well as afterlife.

There is another significant aspect, i.e. the role of teachers. Usually, a student sees his teacher as a role-model and tries to follow him. Besides professional skills, if a teacher is the embodiment of morality and dignity, this will hopefully have a very positive effect on the manners of students. On the contrary, if the teacher mistreats his students, this will have an ill effect on their character besides bringing a bad name for the teaching profession. And, how can such a teacher play any role in the character-building of students? How can a drowning person rescue the other? How can a heedlessly sleeping person awaken the other? How can a person falling into the depth of decadence take the other person to the heights of decorum? So, the role of a teacher should always be taken seriously.

There is also a growing trend among students to go abroad for education. In a foreign country, there are high chances of a student indulging in immoral acts for the reason that there is usually no family member with him to keep an eye on him. Sometimes, he feels footloose and fancy-free and, as a result, continues to drown in the sea of sins due to the company of his new friends who come from a different society with different manners, norms and traditions. Not only can his new friends destroy his character but also, sometimes, his beliefs.

Mentioned here is a sad story of a student. In Russia, there was a Muslim who reported: I met here a young man who seemed to be a Muslim by his facial features. During the meeting, he said that he was previously a Muslim but then became a non-Muslim. He further said, “When I was a Muslim, the students of my college would repeatedly ask me questions about Islam but I was unable to answer their queries because I was brought up in a non-Islamic culture and had no knowledge of Islam. Disappointed by this recurring issue, I once asked my mother, ‘Mum! Tell me what Islam is.’ she replied, ‘I do not know about Islam.’ After I found my mother unable to explain to me anything about Islam, I thought to myself, ‘Why should I follow the religion that neither me nor my mother knows anything about?’ I, therefore, embraced the religion of my friends.”

Anyway, students as well as their parents should ponder over the situation from different perspectives before making any decision in this regard.

The best way to improve the character and manners of students is to enlighten them about the impeccable manners of the Greatest Rasool Muhammad Mustafa صَلَّى اللّٰەُ تَعَالٰى عَلَيْهِ وَاٰلِهٖ وَسَلَّم and to motivate them to follow those manners wholeheartedly and sincerely. In Surah Al-Ahzaab Ayah 21, Almighty Allah عَزَّوَجَلَّ has said:

Indeed for you, following the Messenger of Allah is best.

One of the aims of the Beloved Nabi Muhammad Mustafa صَلَّى اللّٰەُ تَعَالٰى عَلَيْهِ وَاٰلِهٖ وَسَلَّم coming in the world is to rectify the character and matters of people by eradicating bad habits from them and inculcating in them the best manners. Hence, through his sayings and deeds, he صَلَّى اللّٰەُ تَعَالٰى عَلَيْهِ وَاٰلِهٖ وَسَلَّم set a code of conduct and put it into practice in every walk of life. Even today, the world may come out of the abyss of trials and tribulations and gain peace and ease by following his teachings.