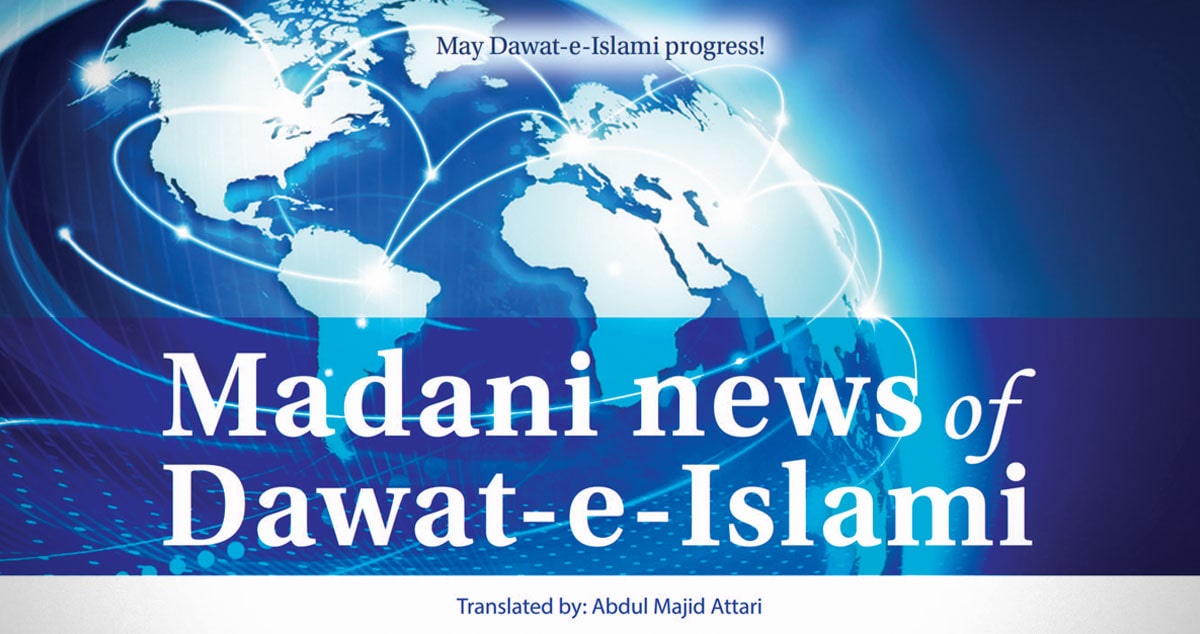 ٭   Under the supervision of the educational department, a Sunnah-inspiring Ijtima’ was held by Dawat-e-Islami for those related to the profession of education. Professors, lecturers, teachers and students from different universities, colleges and schools of Karachi, Baluchistan and Badin attended this Ijtima’.

٭   On 14th April 2019, an Ijtima’ was held which was attended by the teaching staff as well as the administrative staff of Dar-ul-Madinah. Guidelines were provided to attendees.

٭   Under the supervision of Majlis Madani Courses, a 7-day “Twelve Madani Activities Course” was offered. Attendees were guided on how to perform the 12 Madani activities of Dawat-e-Islami. At the end of the course, the Nigran of Pakistan administrative body and a member of Shura Haji Muhammad Shahid Attari shared his Madani pearls with attendees.

٭   A Madani Mashwarah of Majlis for nearby villages was held in which the Nigran-e-Shura Haji Muhammad Imran ‘Attari مُدَّظِلُّەُ الْعَالِی provided guidance to attendees via the internet.

٭   Under the supervision of Majlis Madrasa-tul-Madinah for adults, a certificate-awarding Ijtima’ was held in which certificates were awarded to the Islamic brothers completing the recitation of the entire Quran. On this occasion, the Nigran of Pakistan administrative body delivered his speech.

Inauguration of Masajid and Jami’aat

Under the supervision of Majlis Madrasa-tul-Madinah, certificate-awarding Ijtima’aat were held in different cities including Nawabshah, Hyderabad, Kashmir and Karachi. Members of Shura and other preachers of Dawat-e-Islami delivered Sunnah-inspiring speeches. Moreover, certificates were awarded to the students becoming Huffaz and to those completing the recitation of the entire Quran.

In Faizan-e-Madinah Faisalabad and Faizan-e-‘Attar Masjid Karimabad Karachi, “Faizan-e-Zakah Course” was offered and was attended by VIPs and a great number of devotees of Rasool. Scholars from Dar-ul-Ifta Ahl-e-Sunnat provided guidance on Zakah.

Stall of Maktaba-tul-Madinah at book fair

From 19 to 21 April 2019, a 3-day annual tenth book fair was organized by national book foundation in Pak-China friendship centre, Islamabad. Maktaba-tul-Madinah, the publishing department of Dawat-e-Islami, also set up its stall in the book fair. Various teachers and students got Islamic books and booklets from the stall.

٭   Under the supervision of Majlis Jami’a-tul-Madinah for Islamic sisters, in Ramadan 1440 AH 12-day “Arabic Grammar Workshops” were organized at 37 different places all over Pakistan. In order to promote the Arabic language in Jami’aat-ul-Madinah, an “Arabic Language Course” was offered to respected teachers at 7 different places. At the global Madani Markaz Faizan-e-Madinah Karachi, an “Inheritance Course” was offered. Hundreds of respected students attended these courses and workshops.

٭   Under the supervision of Majlis for Hajj and ‘Umrah, Hajj-guideline Ijtima’aat were held in different cities of Pakistan. Director and deputy director Hajj, pilgrims and many other Islamic brothers attended these Ijtima’aat.

٭   In Sialkot, Haripur and Narowal, Sunnah-inspiring Ijtima’aat were held by Majlis for traders. In Sialkot, Mufti Ali Asghar Attari Madani delivered his speech on the topic “Principles of living a successful life”. In other Ijtima’aat, a member of Shura Haji Yafoor Raza Attari delivered Sunnah-inspiring speeches. Local traders, VIPs and other Islamic brothers attended these Ijtima’aat. Similarly, Madani learning sessions were held in different markets of Karachi and Hyderabad. Shop-owners, workers and others attended these sessions.

Majlis for guideline on funeral rites

Under the supervision of this Majlis, Ijtima’aat were held in different cities of Pakistan including Karachi. Funeral-related rulings were taught to attendees via a video.

Birth of great-granddaughter of Ameer-e-Ahl-e-Sunnat

On the occasion of the birth of his great-granddaughter, Ameer-e-Ahl-e-Sunnat دَامَتْ بَرَكَاتُـهُمُ الْعَالِيَـه went to a hospital in Karachi. Showing affection, he performed Tahneek[1] and called Azan in the ear of the newborn.

Inauguration of Masajid and Faizan-e-Madinah

٭   Under the supervision of Majlis for the construction of Masajid, a Masjid was inaugurated in Johannesburg, South Africa. On this occasion, a preacher of Dawat-e-Islami Maulana Abdun Nabi Hameedi delivered his Sunnah-inspiring speech which was attended by a great number of devotees of Rasool including local Islamic scholars.

[1] Tahneek is a term which means chewing a little amount of something and then putting into the mouth of a newborn baby who eats it before eating or drinking anything else.

In Valencia, Spain, a certificate-awarding Ijtima’ was held which was attended by Umair Ali, the first secretary of Pakistan Embassy. Mahr Jamshed Ahmad, the Chairman of Pakistani community, the guardians of Madani children and other Islamic brothers also attended it.

A 4-day “Ameer-e-Madani Qafilah Course” was offered in Dhaka where respected Islamic students and other Islamic brothers attended this course. A member of Shura, Haji Muhammad Ameen Attari (responsible for Madani Qafilahs) and another member of Shura Sayyid Luqman Attari provided guidance to the attendees of the course from Karachi via the internet.

In Sheffield, England, a Madani learning session was held among refugees. Moreover, similar sessions were held in Jakarta, Rotterdam (Holland), Italy and Bangladesh.

٭   From 1 to 20 Ramadan-ul-Mubarak 1440 AH, a “Faizan-e-Tilawat Course” was offered by Majlis Short Madani Courses for Islamic sisters. On a daily basis, participating Islamic sisters learnt the recitation of one and a half part (Parah) of the Holy Quran, Quranic parables, specific Du’as recited in Ramadan and answers to general questions. Overall, thousands of Islamic sisters attended this Madani course.

٭   During the month of April 2019, 12-day “Madani Qa’idah Teaching Course” was offered in various cities of Pakistan including, Karachi, Hyderabad, Lahore and many others. Over 535 Islamic sisters attended these courses. The method of reciting and teaching the Holy Quran correctly, obligatory Islamic knowledge, fundamental teachings of Islam, Sunnahs and manners were taught.

٭   From 19 to 25 March 2019, an 8-day “Faizan-e-Rafeeq-ul-Haramayn Course” was offered at five different places in Pakistan. During the course, Islamic sisters were guided on how to teach rulings on Hajj and method of ‘Umrah to those Islamic sisters going to perform Hajj.

٭   From 8 to 10 March 2019, a 3-day “Faizan-e-Zakah Course” was offered in different cities of Pakistan. Overall, around 5771 Islamic sisters attended the course. Attendees were guided about necessary rulings on Zakah, Sadaqah and Fitrah. They were also informed about Shar’i and organizational precautions to be taken when collecting donations.

٭   From 1 to 26 March 2019, a 26-day “Madani Qa’idah Course” was offered by Majlis Madrasa-tul-Madinah for adult Islamic sisters at 374 different places in Pakistan. Overall, about 7774 Islamic sisters attended the course.

Efforts made by educational department

٭   Madani Dars was delivered at about 968 educational institutions.

At about 40 different places of the world including UK, Bangladesh and India, 3-hour Madani In’amaat Ijtima’aat were held. Overall, more or less 1750 Islamic sisters attended these Ijtima’aat in which they were motivated to lead their life following 63 Madani In’amaat.