The Madani news of Dawat-e-Islami

The Madani news of Dawat-e-Islami

On the 2nd of September 2020, a special live programme was broadcast on Madani Channel to commemorate Dawat-e-Islami day, in which the founder of Dawat-e-Islami, Maulana Muhammad Ilyas ‘Attar Qaadiri دَامَـتْ بَـرَكَـاتُـهُـمُ الْـعَـالِـيَـهْ especially participated. The programme was initiated with recitation of the Quran and Na’t, after which, a Question and Answer session was conducted with the Ameer of Ahl-us-Sunnah. Talking about the initial days of Dawat-e-Islami, the Ameer of Ahl-us-Sunnah said:  In 1981, I used to perform Imamat in Noor Masjid, Kharadar. One day, the younger brother of the late Na’t Khuwan, Yusuf Memon, came to me with an invitation from ‘Allamah Shah Ahmad Noorani رَحْمَةُ الـلّٰـهِ عَلَيْه. In that invitation, it was stated that we have organised a meeting regarding Dawat-e-Islami on such-and-such day, in which Ra’ees-ut-Tahreer, ‘Allamah Arshad-ul-Qaadiri رَحْمَةُ الـلّٰـهِ عَلَيْه and other scholars and elders will be present; you are to attend also.

Thus, I also attended. Maulana Noorani and ‘Allamah Arshad-ul-Qaadiri رَحْمَةُ الـلّٰـهِ عَلَيْهِمَا had an excellent organisational mindset. Both of these great personages had the mindset of starting a movement which was completely free of politics, which would carry out work solely for the religion, give the call to righteousness and which had nothing to do with politics at all; its sole mission would be to propagate the religion. Ghazali-e-Zaman, ‘Allamah Sayyid Ahmad Sa’eed Kaazimi Shah رَحْمَةُ الـلّٰـهِ عَلَيْه and other scholars and elders of Ahl-us-Sunnah were also present in this meeting, but we did not reach to any concrete conclusion. Many other meetings also took place later on and I was appointed as the leader of Dawat-e-Islami.’

An influential personality, Falah-ud-Deen Qurayshi, constructed the Jami’ah Masjid Faizan-e-Umar Farooq in Al-Falah Commercial Centre, Multan, and then handed it over to Dawat-e-Islami. On this occasion, an opening ceremony was organised under the Majlis Aimmah-e-Masajid, in which Rukn-e-Shura Qaari Muhammad Saleem Attari delivered a Sunnah-inspired Bayan. At the end, a Du’a was made for the Islamic brothers who donated the Masjid. The Nigran of the Kabinah said that the construction of the Masjid costed more than 10 million rupees, and more than 300 people will be able to pray in the Masjid at any one time. The Nigran of the Kabinah further stated that Madrassa-tul-Madinah has also been established in the Masjid so that the children can be adorned with the teachings of the Holy Qur`an.

On the passing anniversary of the late father of Maulana Abdul Habib Attari, Haji Yaqoob Gong and on the occasion of the opening ceremony of Jami’ah Masjid Faizan-e-A’la Hadrat, a gathering of Na’t was organised on the 18th of September 2020 in Hill Town, near Awami Chowk, Manzoor Colony, Karachi. In the Na’t gathering, Rukn-e-Shura Maulana Abdul Habib Attari delivered a Sunnah-inspired Bayan and encouraged the locals to populate the Masjid.

Initiation of four Madrassa-tul-Madinahs for the blind

Alongside the teaching of the Holy Quran, various other courses will take place free of charge

The Majlis for Special Needs (Dawat-e-Islami) has started Madrassa-tul-Madinah for blind individuals at four locations of Pakistan. In these Madaris-ul-Madinah, special needs individuals will be taught the Holy Qur`an free of charge. Also, different courses will be conducted for the devotees of the Prophet who are attached with different departments, which especially includes computer courses. According to the details, Madrassa-tul-Madinah for the blind has been set up in Mumtaz Colony Latifabad Chowk, Hyderabad; Building Isha’at-ul-Islam Aqb Khanewal Petrol Pump, Multan; Kotli Road Plaak, Chakswari, Kashmir; and Main Bazar, Kalabagh. In order to enrol in these Madaris-ul-Madinah, the following numbers can be contacted: 03235138219/03024811716. 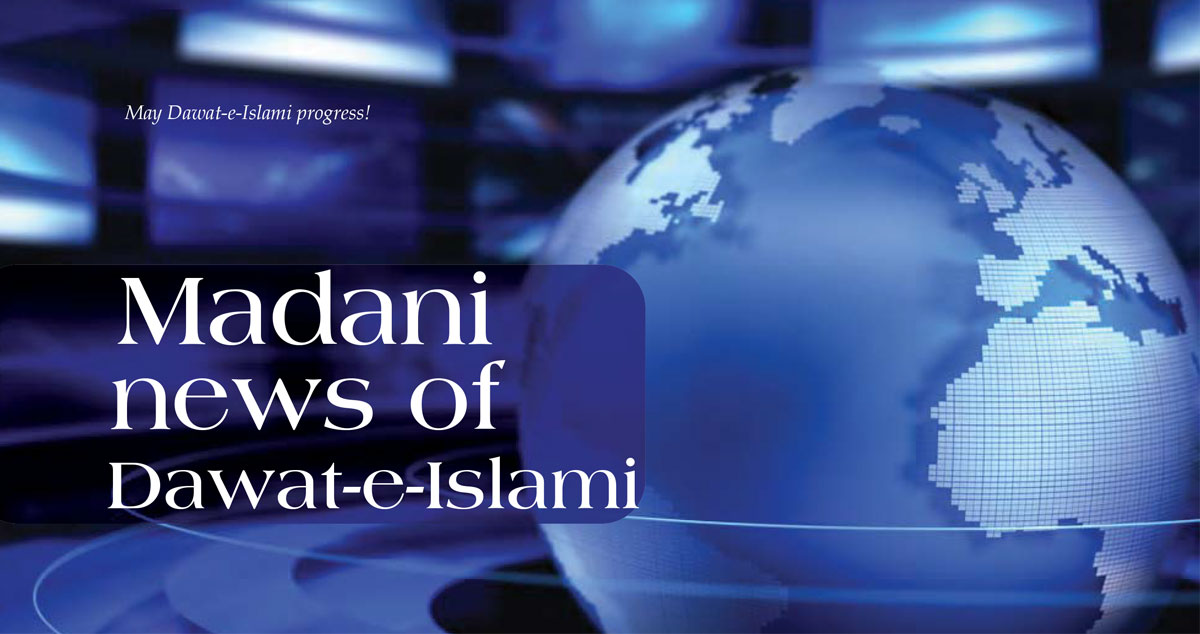 Under the supervision of Majlis Madrasa-tul-Madinah Online, a Sunnah-inspiring Ijtima’ was held. Devotees of
Read Article