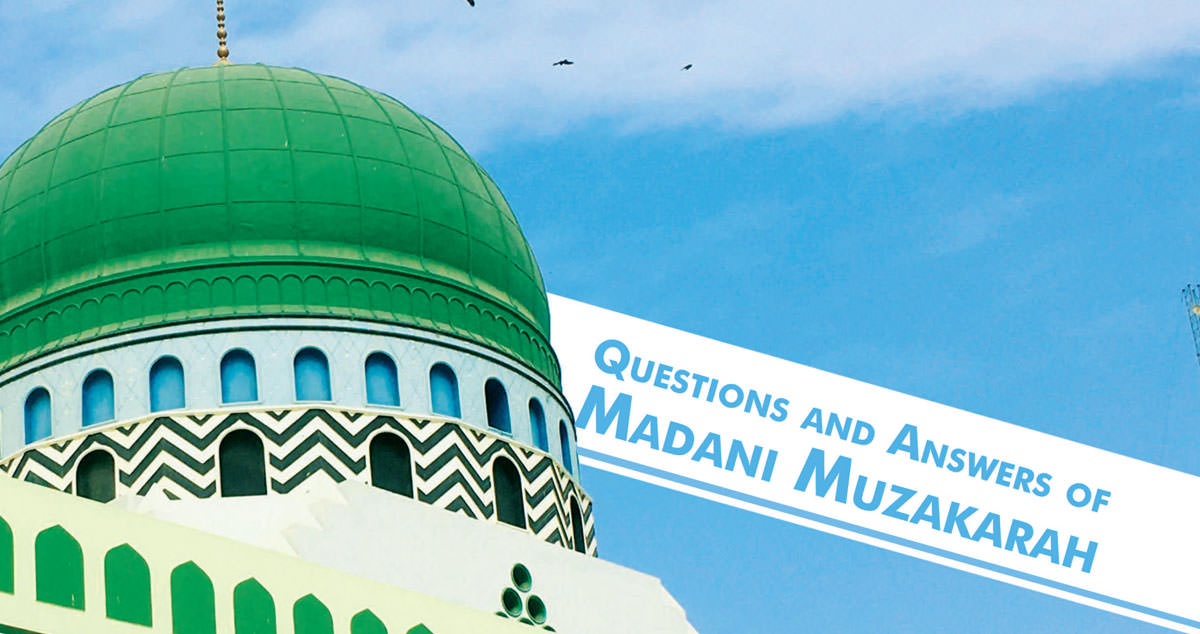 Questions and Answers of Madani Muzakarah

Answer: The thing that is mentioned often, and the thing that we remember often, sometimes appear in our dream. Therefore, mention Ghaus-e-A’zam رَحْمَةُ الـلّٰـهِ عَلَيْه, remember him, convey rewards to him, and continue to follow in his footsteps; اِنْ شَــآءَالـلّٰـه you will eventually be honoured [with seeing him]. (Madani Muzakarah, 2nd Rabi’-ul-Aakhir, 1441 AH)

Answer: Sayyiduna Shaykh Abdul Qaadir Jilani رحْمَةُ الـلّٰـهِ عَلَيْه passed away on the 11th of Rabi’-ul-Aakhir. (Tafreeh Al-Khaatir (Amended), p. 154) This is why his ‘Urs is observed on this day and rewards are conveyed to him. We conduct Madani Muzakarahs daily in those 11 days, through which the call to righteousness is presented and religious knowledge is attained. اِنْ شَــآءَالـلّٰـه many people will come onto the path of righteousness, repent of their sins and habitually offer their Salah. (Madani Muzakarah, 2nd Rabi’-ul-Aakhir, 1441 AH)

Question 4: Why is Rabi’-ul-Aakhir referred to as ‘The month of the main Ghiyarhween’?

Answer: The devotees of Ghaus-e-A’zam who commemorate the Ghiyarhween every month refer to Rabi’ ul-Aakhir as ‘the month of the main Ghiyarhween.’ [This is similar to how] Although the Hajj that falls on a Friday is referred to as Hajj Akbar in our society because of its performer receiving the reward of 70 Hajj, in reality, it is ‘Umrah that is called Hajj Asghar, i.e. the lesser Hajj, and gathering in the plains of ‘Arafat on 9th of Zul-Hijja-til-Haraam that is known as Hajj Akbar, i.e. the greater Hajj. (Mirat-ul-Manajih, vol. 2, p. 106)

How is it to perform the [prescribed] practice using dates before the 11th night?

Question 5: Can the practice of blowing on dates on the night of Ghiyarhween be performed beforehand and then the dates be eaten on the 11th night?

Answer: This practice[1] is to be performed on the 11th night; this is what has been stipulated by the predecessors. (Madani Muzakarah, 2nd Rabi’-ul-Aakhir, 1441 AH)

How is it for someone diabetic to eat the dates that have been blown upon?

Question 6: Can someone diabetic eat dates that have been blown upon?

Answer: It is necessary for a person suffering from diabetes to consult his doctor before eating dates. Generally, sweet things are quickly perceived as ‘blessed’ by those who have diabetes. Such people only deceive themselves by eating sweet things in the name of [attaining] ‘blessings.’ (Madani Muzakarah, 2nd Rabi’-ul-Aakhir, 1441 AH)

The Khatam of Ghiyarhween can be performed throughout the year

Question 7: Can the Khatam of the main Ghiyarhween be performed on the 10th?

Answer: It can be performed throughout the year—there is no harm in this. Whether you commemorate Ghiyarhween all the time or not even once in the whole year, there is no prohibition. If someone does not observe it at all and does not consider or label those who celebrate it as wrong or mistaken, he will not be sinful. (Madani Muzakarah, 2 Rabi-ul-Aakhir, 1441 AH)

Is it Disrespectful to Let the Beard Touch the Ground?

Question 8: If the beard touches the ground, then what will happen? Also, is this considered disrespectful?

Should a Shroud be Sewn or Unsewn?

Question 9: Should the shroud of an Islamic sister be sewn or unsewn?

Answer: Regardless of whether it is a man or a woman, the shroud for both should be unsewn. (Madani Muzakarah, 5 Rabi-ul-Awwal, 1441 AH)

Jilani Remedy: On the night of 11th Rabi’-ul-Aakhir, take 3 dates, recite Surah Al-Fatihah and Surah Al-Ikhlas once, recite شیخ عبدالقادِر جِیلانی شَیئًا لِلّٰەِ اَلْمَدَد یا 11 times (with salat once before and after), and then blow on one date. Like this, recite and blow on the 2nd and 3rd date in the same manner. It is not necessary to eat the dates on the same night; they can be eaten at any time on any day. اِنْ شَــآءَالـلّٰـه This will be beneficial for all types of stomach ailments. (Jinnat ka Badshah, p.20)