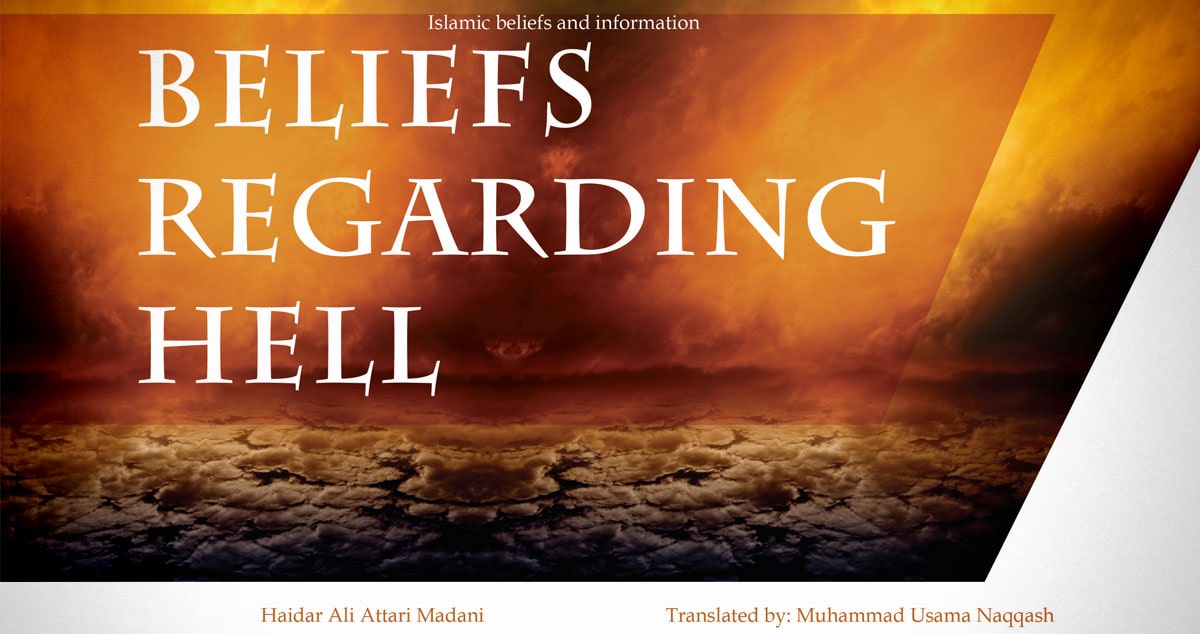 To punish unbelievers, polytheists, hypocrites and sinners for their deeds, Allah عَزَّوَجَلَّ has made an extremely terrifying place in the Hereafter. Its name is “Jahannam [Hell]” and it is also called “Dozakh” in Urdu.

Jahannam is Haq [truth]. The one who denies it is an unbeliever. Likewise, a person who accepts the existence of Jahannam but considers it to be different from the general meaning of Jahannam which is famous amongst Muslims, for example, he holds the opinion about torment that it means spiritual torment, i.e. being grieved at seeing one’s own bad deeds, such person is also an unbeliever; he is actually the denier of Jahannam. (Ash-Shifa, vol. 2, pp. 290)

Thousands of years have passed since the creation of Hell. (Bahar-e-Shari’at, vol. 1, pp. 151) It already exists even at present; it will not be created on the Day of Judgement. (Minh-ur-Raud-ul-Azhar, pp. 284)

Jahannam is beneath the seventh earth. (Minh-ur-Raud-ul-Azhar, pp. 285)

The colour of the fire of Jahannam

Allah عَزَّوَجَلَّ alone knows the actual depth of Jahannam and He عَزَّوَجَلَّ has blessed the Holy Prophet صَلَّى اللّٰەُ عَلَيْهِ وَاٰلِهٖ وَسَلَّم with this information. However, it has been stated in a blessed Hadees that if a giant rock is dropped in Hell from its edge, it will not reach the bottom even in seventy years. (Tirmizi, vol. 4, pp. 260, Hadees 2584)

If a lead ball equal to the size of a human head is dropped from the sky to the earth, it will reach the earth before the night falls although it is a distance of five hundred years. (Tirmizi, vol. 4, pp. 265, Hadees 2597)

Sayyiduna ‘Abdullah Bin ‘Abbas رَضِىَ اللّٰەُ عَنْهُمَا asked his student Sayyiduna Mujahid رَحْمَةُ اللّٰەِ عَلَيْه regarding the hugeness of Jahannam and then he himself answered: The distance between a Hell dweller’s earlobe and his shoulder will be [equal to] the distance of seventy years. (Mawsu’ah Imam Ibn Abid Dunya, vol. 6, pp. 402)

Dear Islamic brothers! You can now easily guess how huge Hell will be when a Hell dweller will be so tall! ‘اَلْاَمَان وَالْحَفِیْظ’

It has seven gates; for each gate is a part assigned from them (for different disbelievers a different area of Hell is fixed).

Hell dwellers will be given thorny cactus (a thorny poisonous tree) to eat. (Tirmizi, vol. 4, pp. 263, Hadees 2594) For drinking, they will be given pus oozing out from the body of Hell dwellers; and hot water, boiling like the bottom part of oil, which will be so hot that as soon as it will come near to the mouth, the entire skin of the mouth will melt and fall in it. That water will break intestines to pieces as soon as it reaches the stomach due to which intestines will flow like liquid and go towards the feet. (Tirmizi, vol. 4, pp. 262, Hadees 2591, 2592, 2593)

Allah عَزَّوَجَلَّ likes our human face because it is like the blessed face of the Beloved Prophet (صَلَّى اللّٰەُ عَلَيْهِ وَاٰلِهٖ وَسَلَّم) of Allah. Therefore, the face of unbelievers will not be human face in Hell; in fact, it will be different which have been mentioned in different Ahadees in the following way: The faces of Hell dwellers will be so hateful that if a Hell dweller is brought in the world having the same face, all the people will die because of the ugliness of his face and his foul smell. (Attargheeb Wattarheeb, vol. 4, pp. 263, Hadees 68)

Moreover, the body of unbelievers will be enlarged to such an extent that the distance from one shoulder to the other is of 3 days for a fast rider. (Sahih Bukhari, vol. 4, pp. 260, Hadees 6551)

Tongue will be dragging till one Kaus (one Kaus is approximately equal to three thousand yards) two Kaus outside the mouth that people will trample on it. (Tirmizi, vol. 4, pp. 261, Hadees 2589)

The upper lip of Hell dwellers will fold and reach to the middle of the head; and the lower lip will hang down and touch the navel. (Tirmizi, vol. 4, pp. 264, Hadees 2596)

How will the Hell be brought in the Plain of Judgement?

Sayyiduna ‘Abdullah Bin Mas’ood رَضِىَ اللّٰەُ عَنْهُ has narrated that the Beloved Prophet صَلَّى اللّٰەُ عَلَيْهِ وَاٰلِهٖ وَسَلَّم said: Hell will be brought on the Day of Judgement. There will be its seventy thousand reins, and seventy thousand angels will be holding and pulling each rein. (Sahih Muslim, pp. 1167, Hadees 7164)

The lightest torment of Hell

A person with the lightest torment in Hell is the one who will be made to wear two shoes and two shoelaces of fire due to which his brain will boil like a boiling pot. He will assume that he is suffering from the most severe torment, although he will be suffering from the lightest torment. (Sahih Muslim, pp. 111, Hadees 517) In the same Hadees, the narration from Imam Ahmad is in the following way: Firebrands will be kept in the soles of his feet due to which brain will boil. (Musnad Ahmad, vol. 6, pp. 381, Hadees 18418)

Different ways of the torment of Hell

In the light of blessed Ahadees, it is known that Hell dwellers will be punished for their deeds through different ways. For example: Fire, river of blood, stretching the corners of lips, crushing the head through stoning, scratching the face, snake, scorpion, and the foods which get stuck in throat. (Jahannam kay Khatraat, pp. 16 to 20)

Du’a of protection from the torment of Hell

Dear Islamic brothers! Many such deeds have been mentioned in the Holy Quran and Hadees for which the warning of Hell has been given. We should make efforts to learn about all such deeds, and refrain from them. We should also keep making Du’a to Allah عَزَّوَجَلَّ for peace and safety, and His mercy.

For knowing about the deeds for which the warning of Hell has been given, purchase Maktaba-tul-Madinah’s book ‘Jahannam mayn Lay Jaanay walay A’maal’ from Maktaba-tul-Madinah or download it from Dawat-e-Islami’s website for free: www.dawateislami.net; read it yourself and persuade others as well to do so.