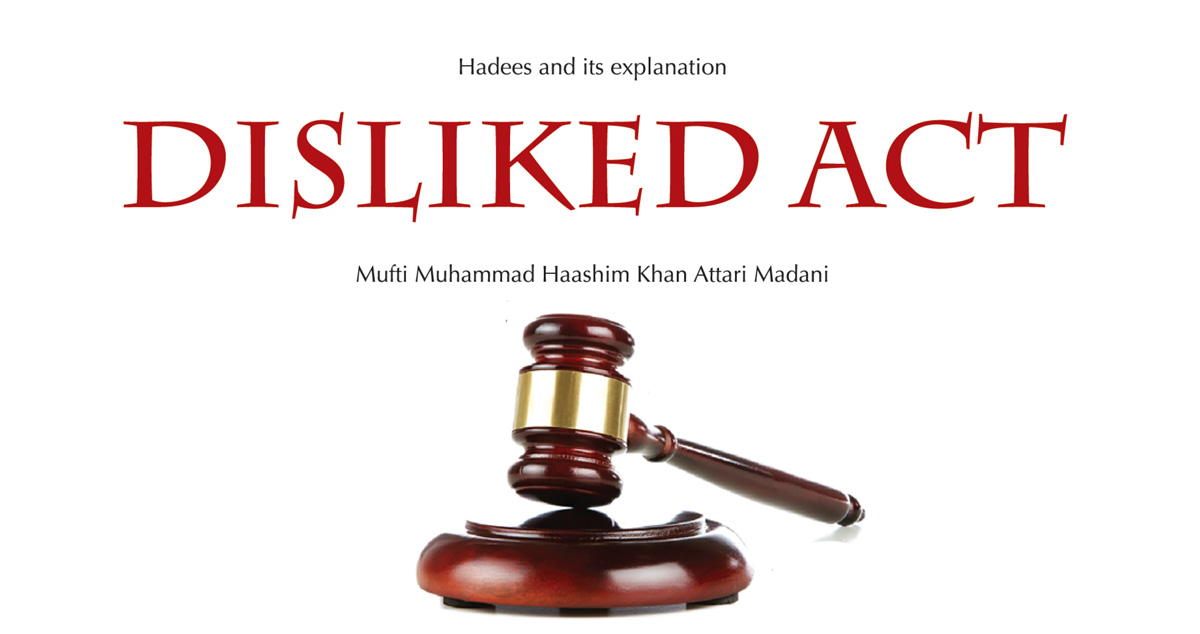 ‘Allamah Sharafuddin Husayn Bin ‘Abdullah Teebi رَحْمَۃُ اللہِ تَعَالٰی عَلَیْہِ (year of demise: 743 Hijri) has stated: This blessed Hadees mentions about the fact that Talaaq is Mashroo’ [مَشْرُوْع], i.e. if Talaaq is given, it will take place but it is ‘Mabghood’ [مَبْغُوْض], i.e. a disliked act in the sight of Allah عَزَّوَجَلَّ, such as offering Fard Salah at home without a Shar’i ‘Uzr [valid reason], and offering Salah on an usurped piece of land (as Salah will be valid in both of these cases but the one doing so will become a sinner); likewise, buying and selling on Friday after the Azan of Jumu’ah (as buying and selling will be valid but those doing so will become sinners). (Sharh-ul-Mishkat lit-Teebi, vol. 7, pp. 2342, Taht-al-Hadees 3280)

In the explanation of this blessed Hadees, ‘Allamah ‘Ali Bin Sultan Muhammad Qaari Hanafi رَحْمَۃُ اللہِ تَعَالٰی عَلَیْہِ (year of demise: 1014 Hijri) has stated: ‘اَصَحْ’ [i.e. the most correct opinion] is that it is forbidden to give Talaaq without Haajat [need]. The word Mubah is also used for something which is Mubah at certain times, i.e. giving Talaaq is Mubah only when its “Haajat and Zarurat [need]” is found. (Mirqat, vol. 6, pp. 422, Taht-al-Hadees 3280)

Following is the translation and summary of a Persian Fatwa present in Fatawa Razawiyyah: There are three opinions of ‘Ulama regarding Talaaq being Mubah, i.e. permissible:

1 The first opinion is that Talaaq is unconditionally Mubah, even if it is given without a reason.

2 The second opinion is that it is not Mubah for the husband to give Talaaq except for the fact that the wife is old, ugly, or commits indecency; it is a weak opinion.

3 The third opinion is that if the husband has a Haajat [need] for Talaaq, it is Mubah, otherwise forbidden; this very opinion is Sahih [authentic] and proved by proofs.

Being Halal and being forbidden can coexist

Imam-e-Ahl-e-Sunnat, Imam Ahmad Raza Khan رَحْمَۃُ اللہِ تَعَالٰی عَلَیْہِ has stated: In a single thing, it is not unlikely for Hill-o-Hazr [being Halal and being forbidden] to coexist from two perspectives. Talaaq is ‘فِیْ نَفْسِہٖ’ [itself] Halal, and since [for a husband and wife,] Shari’ah likes living together and dislikes getting separated, it is forbidden [to give Talaaq] without a Haajat, or unlawfully. (Fatawa Razawiyyah, vol. 12, pp. 330)

Reasons for Talaaq being disliked

2 There is breaking off a relationship in it.

3 By giving Talaaq, hatred and enmity develop in each other’s hearts.

4 In most cases, the two parties indulge in Haraam because of Talaaq (as they indulge in backbiting against each other, hurting each other’s feelings, etc.). (Haashiya-tus-Sindi ‘ala Sunan Ibn Majah, vol. 1, pp. 500, Taht-al-Hadees 2018)

5 In the sight of Satan, the most beloved act is to cause the husband and wife to get separated; therefore, amongst all Halal things, it is the most disliked act in the sight of Allah عَزَّوَجَلَّ. (Sharh-ul-Mishkat lit-Teebi, vol. 7, pp. 2342, Taht-al-Hadees 3280)

Sadr-ush-Shari’ah, Mufti Amjad ‘Ali A’zami رَحْمَۃُ اللہِ تَعَالٰی عَلَیْہِ has stated: It is permissible to give Talaaq, but forbidden without a Shar’i reason. Moreover, it is Mubah if there is a Shar’i reason; in fact, it is Mustahab in some cases such as the woman hurts him or others, or does not offer Salah. Sayyiduna ‘Abdullah Bin Mas’ood رَضِىَ اللّٰہُ تَعَالٰی عَنْهُ has stated, ‘[Suppose] I appear in the court of Allah عَزَّوَجَلَّ in the state that I give Talaaq to the woman who does not offer Salah and I still owe her her Mahr; it is better than spending life with her.’ In some cases, it is Wajib to give Talaaq, for example, the husband is impotent or a transgender or someone has done magic on him such that he is not able to copulate and there seems to be no solution for it; as in these cases, not giving Talaaq means causing severe pain [to the woman]. (Bahar-e-Shari’at, vol. 2, pp. 110)

As humans we realise the importance of light, often going to great lengths to install suitable lighting in our homes.