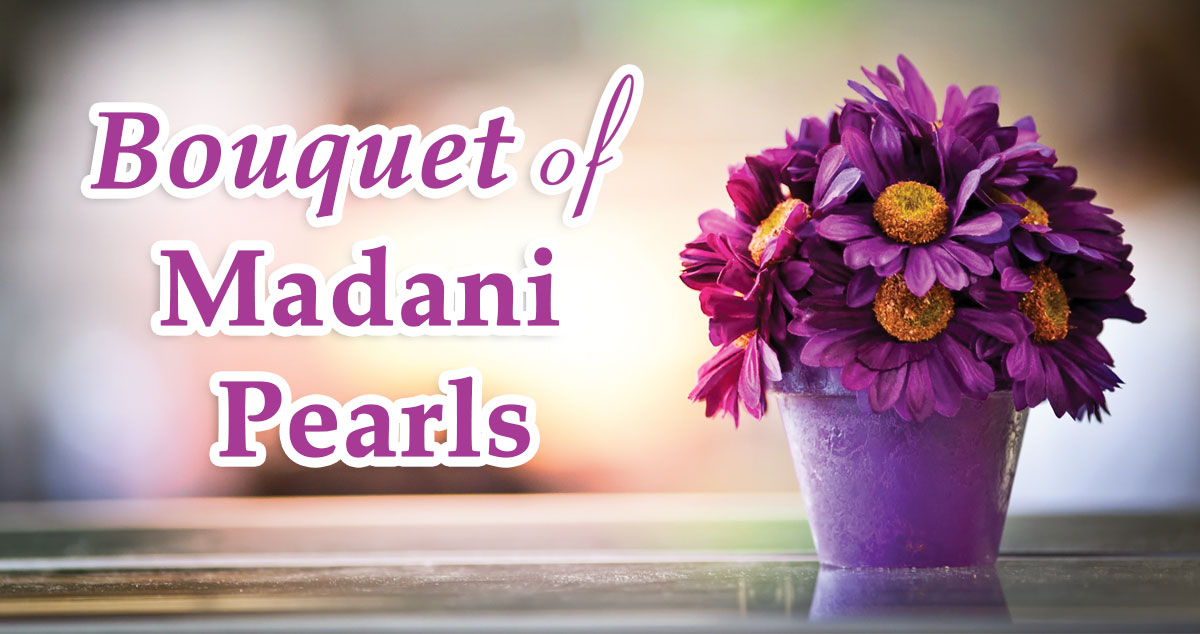 1. A cause of poverty in sustenance

Sayyiduna ‘Ali کَرَّمَ الـلّٰـهُ تَعَالٰی وَجھَهُ الکَرِیم said: A servant deprives himself of lawful sustenance due to his impatience, and despite it, he does not get more than what is determined for him. (Al-Mustatraf, vol. 1, pp. 124)

3. Consequence of showing displeasure at admonisher

Sayyiduna ‘Abdullah Bin Mas’ood رَضِىَ اللہُ تَعَالٰی عَـنْهُ said: This is sufficient for one’s being a sinner that when he is asked to fear Allah عَزَّوَجَلَّ, he becomes displeased and says, ‘Mind your own business’. (Tabqat-us-Sufiyah, vol. 1, pp. 171)

4. Tip for going to Jannah smilingly

Sayyiduna Abu Darda رَضِىَ اللہُ تَعَالٰی عَـنْهُ said: One who wants to go to Jannah smilingly should keep his tongue moist with the Zikr of Allah عَزَّوَجَلَّ. (Tabqat-us-Sufiyah, vol. 1, pp. 117)

5. Who is a perfect Islamic scholar?

Sayyiduna ‘Abdullah Bin ‘Umar رَضِیَ الـلّٰـهُ تَعَالٰی عَـنْهُمَا said: No one can become a perfect scholar until he gives up feeling of jealousy [harbouring] towards those who are better than him, looking down on others who are less privileged than him and demanding wealth against his knowledge. (Tabqat-us-Sufiyah, vol. 1, pp. 166)

Sayyiduna Hasan Basri رَحْمَةُ اللہِ تَعَالٰی عَلَيْه said: Hajj-e-Mabroor is that Hajj after which a bondman has aversion towards the world and engages himself in Hereafter [acts]. (Al-Mustatraf, vol. 1, pp. 23)

Sayyiduna Abu Bakr Bin Iyaash [عیاش] رَضِىَ اللہُ تَعَالٰی عَـنْهُ said: The smallest benefit of silence is that one attains peace and it is sufficient for safety. (Tabqat-us-Sufiyah, vol. 1, pp. 218)

8. The real success and attainment

Sayyiduna Imam Muhammad Ghazali رَحْمَةُ اللہِ تَعَالٰی عَلَيْه said: The real success and attainment for a person is that he regards his meeting with Allah عَزَّوَجَلَّ as his aim, Hereafter as his eternal abode, world as [his] transitory destination, [his] body as his mount and his body parts as his servants. (Ihya-ul-‘Uloom, vol. 3, pp. 11)

1 Wilayat is merely a bestowal

If one likes to listen to his false praising in a way that people admire him describing his virtues which he does not have then it is absolutely Haram-e-Qat’ee. (Fatawa Razawiyyah, vol. 21, pp. 597)

3 Difference between Khalifah and heir

Difference between a Khalifah and an heir is obvious as all the children of a man are his heirs whereas the capability of being a successor is not found in everyone. (Fatawa Razawiyyah, vol. 21, pp. 532)

It is Fard [obligatory] to obey the parents in lawful things even though they (parents) themselves are indulged in major sins. (Fatawa Razawiyyah, vol. 21, pp. 157)

5 No Du’a of a Muslim is void of Wasilah

A Muslim’s heart is full of Tawassul of the Beloved Rasool صَلَّى اللہُ تَعَالٰى عَلَيْهِ وَاٰلِهٖ وَسَلَّم. None of his Du’a’ is without Tawassul, even though sometimes he does not mention it verbally. (Fatawa Razawiyyah, vol. 21, pp. 194)

Attar’s garden, what a beautiful garden!

Pride and arrogance intensifies anger and prevents one from tolerance and gentleness. (Madani Muzakarah, 19 Rabi’-ul-Aakhir, 1437 AH)

Hardheartedness causes the tears to dry up which [usually] flow out of the fear of Allah عَزَّوَجَلَّ, and hardheartedness occurs because of committing sins frequently. (Madani Muzakarah, 10 Jumadal Aula, 1437 AH)

3. Cause of a weak memory

One should avoid eating sour food items [excessively] because they cause phlegm which weakens the memory. (Madani Muzakarah, 2 Muharram-ul-Haraam, 1438 AH)

It is good to compete with each other in carrying out good deeds. (Madani Muzakarah, 21 Muharram-ul-Haraam, 1438 AH)

5. Storing pictures of ladies family members in the mobile phones

The sensibility lies in this thing that one should not store the digital pictures of the mother of children other Maharim women in one’s mobile phone at all because mobile can go missing or get stolen and there is a strong probability of passing pictures of one’s family members to the strangers. (Madani Muzakarah, 26 Safar-ul-Muzaffar, 1438 AH)

6. Tip for removing the harmful effects of meat

When cooking meat, add bottle gourd, turnip, potatoes or any other vegetable, this will remove the harmful effects of meat. (Madani Muzakarah, 4 Rabi’-ul-Awwal, 1438 AH)