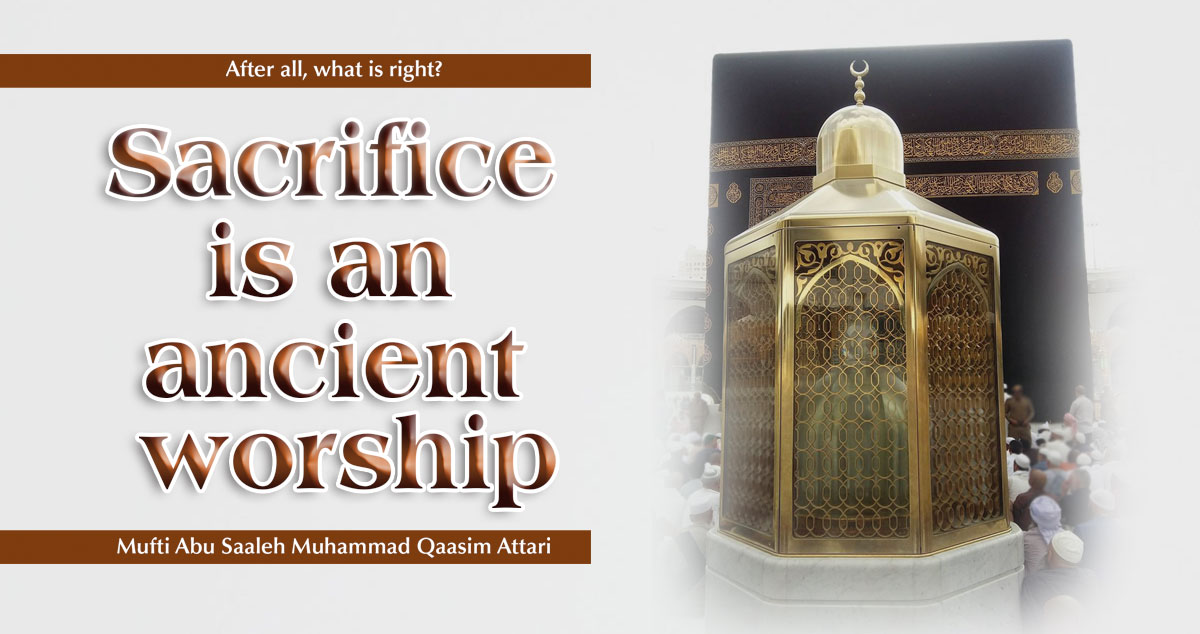 Qurbani (sacrifice) is an ancient worship which has been in practice in all the Ummahs since forever as it is mentioned in Glorious Quran:

And for every nation We have appointed a sacrifice; that they should mention the name of Allah over the mute animals which He has provided them.

Apart from this brief description, if we study history in depth, it is revealed that all the Divine religions speak about Qurbani; furthermore, with the exception of a few, it is also mentioned in almost all the non-Divine religions. In addition to the commandment of Qurbani given to each Ummah, the Glorious Quran has also mentioned Qurbani while describing details of the different Ummahs.

Regarding the incident of Haabeel and Qaabeel, taken place in the times of Sayyiduna Aadam عَـلَيْـهِ الـسَّـلَام, it is stated in Glorious Quran:

And recite to them the true story of the two sons of Aadam; when both of them offered separate sacrifices, so the sacrifice of one was accepted and the other one’s was not accepted.

The present bible states about the Qurbani. Arranging and managing the whole process of Qurbani was one of the important responsibilities of their scholars and it was popular and well-known to such an extent that they had also placed this very condition even for embracing Islam. The Glorious Quran has stated their quote:

Those who say, ‘Allah has made us promise, that we should not believe in any Messenger until he brings an order of a sacrifice, which a fire (from heaven) shall consume.’

Deen-e-Ibraheemi is the origin of Deen-e-Islam. In Deen-e-Ibraheemi, when Sayyiduna Ibraheem عَـلَيْـهِ الـصَّلٰوةُ وَالـسَّلَام was commanded to make an announcement of Hajj, at the same time the virtues of Qurbani of Hajj and its advantages and benefits were also stated:

And publicly announce Hajj amongst the people, they will come to you on foot and on every skinny she-camel, coming from every far distant path. In order that they may gain their benefit, and mention the name of Allah on the known days because He has provided for them the mute animals, so eat from them yourself and feed the distressed destitute.

Deen-e-Islam is the continuation of the same Deen-e-Ibraheemi, so, the orders of Qurbani are quite obvious in it. Each and every Muslim child is well aware of Hajj especially the Qurbani of Eid-ul-Adha. There are 5 kinds of Qurbani in Deen-e-Islam:

1 First one, the Qurbani that has been mentioned in Hajj rites and is called “Hadyun” [ہدی]. As given in Surah Al-Ma`idah, Ayah 97, part 7.

2 Second one, the Qurbani that is Wajib on the one performing Hajj Tamattu’[1] or Hajj Qiraan as mentioned in Surah Al-Baqarah, Ayah 196, part 2.

3 The third one is performed as expiation. For example Ihsaar or Janayat. It is mentioned in Surah Al-Baqarah, Ayah 196, part 2.

4 Fourth one, at the occasion of Eid-ul-Adha which is performed in the memory of the blessed Qurbani of Sayyiduna Ibraheem عَـلَيْـهِ الـصَّلٰوةُ وَالـسَّلَام. It is mentioned in Surah Al-Kawsar.

5 The fifth type is ‘Aqeeqah’. It is performed on the occasion of a child’s birth as an indication of happiness and gratitude to Allah عَزَّوَجَلَّ. It is proven by blessed Ahadees.

A basic wisdom behind Qurbani is to spend wealth for the pleasure of Allah Almighty. It is for the reason, Qurbani holds a great importance and dignity in Islam. Furthermore, Allah Almighty has even declared it ‘شَعائر اللّٰہ’ i.e., ‘signs of Allah Almighty’. It is stated in the Glorious Quran:

And the large sacrificial animals; We have made them amongst the symbols of Allah for you. (Part 17, Surah Al-Hajj, Ayah 36)

Qurbani carries much wisdom. Firstly, the basic meaning of Islam is to have a complete submission to the Divine command which the Qurbani actually demands. Secondly it involves eating and feeding the destitute and this wisdom is mentioned in Glorious Quran:

So eat from it yourself and feed the one who patiently awaits and the beggar.

Thirdly, through Qurbani, the excellent food, ‘meat’, reaches the poor and the destitute which they usually cannot buy. Fourthly, Qurbani expresses the rewards and favours bestowed upon Sayyiduna Ibraheem عَـلَيْـهِ الـصَّلٰوةُ وَالـسَّلَام and it encourages people to show obedience.

And those people (of the Book) were ordered to worship Allah only, believing solely in Him, being on one side purely (i.e. towards Islam).(Part 30, Surah Al-Bayyinah, Ayah 5)

It is for the reason, Salah, Sajdah, Zakah, Sawm, Hajj and all forms of worship are [performed] for Allah عَزَّوَجَلَّ alone.

An objection to the Qurbani and its answer

Some people comment in this way that the act of Qurbani kills the animal and wastes money. This amount should be spent for any national cause or be given to the poor. Here is an answer:

First thing is that Allah عَزَّوَجَلَّ knows this benefit and loss better than us rather He عَزَّوَجَلَّ has commanded us to do so, therefore, the blessed commandment of ‘عالم الغیب والشھادۃ’ is most honourable to us. Second thing is that distributing meat of sacrificial animal amongst the poor has been declared a Mustahab act by Shari’ah. So, through this noble act, not only is the very basic need of the poor met but the Divine command is also acted upon.

Third thing is that Wajib Qurbani should be performed according to Shari’ah whereas people can distribute amount of money in place of Nafli Qurbani if they want. No one has ever given any statement or remark such as ‘no poor person should be given even a rupee other than Wajib Qurbani’. Fourth thing is that instead of criticising and raising objections, they should spend billions of rupees for the poor which are invested in making dramas, movies and other such futile and luxurious activities.

In short! The truth is that the poor can be helped through so many other ways but those who are disgusted with religion do not see other things. They become worried about the poor only when it comes to the occasion of Qurbani. 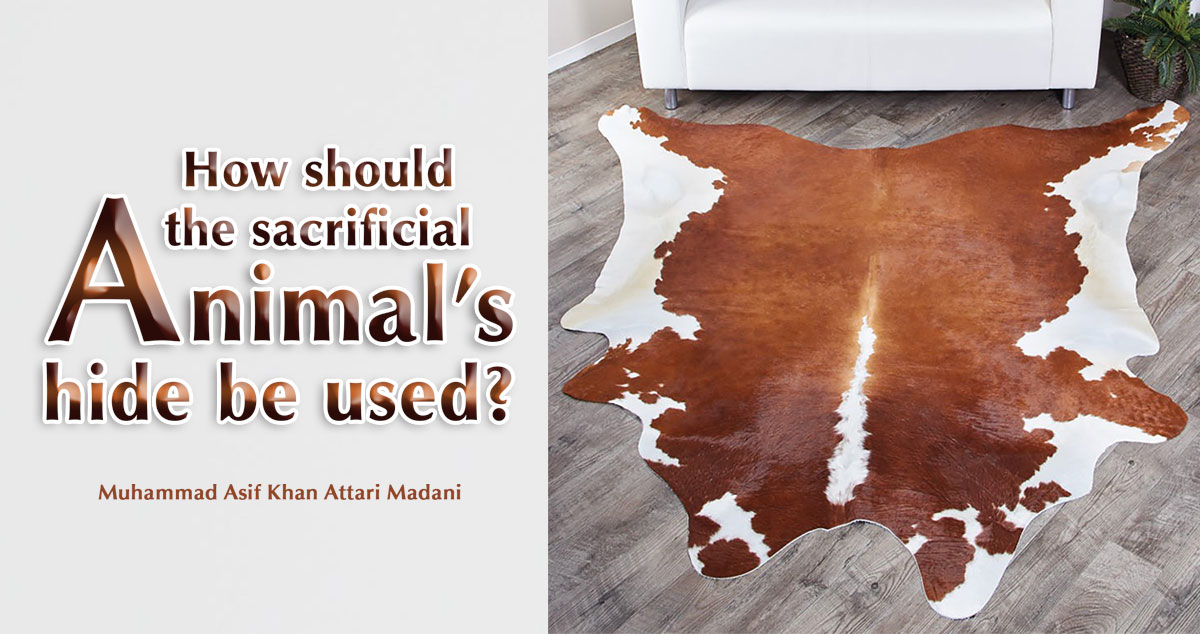 Dear Islamic brothers! It is very necessary to have accurate information about a righteous deed for performing it correctly and attaining its reward. One such deed that has excellence and brings about plenty of reward is to offer sacrifice in the way of Allah عَزَّوَجَلَّ. Therefore, it is very necessary to have its proper knowledge. There are some precautions [to be considered] before buying the sacrificial animal and some after buying it. Please read some precautions about the sacrificial animal’s hide.

Use of sacrificial animal’s hide

٭ The hide of a sacrificial animal can be used in every such work that is a virtuous deed and brings about reward. (Fatawa Razawiyyah, vol. 20, pp. 473)

٭ The one who sacrifices an animal can use its hide for any of his work without exchanging it for anything. For example, he can use it to make a prayer mat, sieve, bag, Mashkeezah [a small leather bag for carrying water], dining mat, a leather bag for drawing water, etc., or he can [also] use it for covers of the books. (Bahar-e-Shari’at, vol. 3, pp. 345-346)

٭ The hide of the sacrificial animal cannot be given as a wage to the person who has slaughtered the animal [as per Shari’ah] because giving it as a wage means [similar to] selling it. (Al-Hidayah, Juz: 4, vol. 2, pp. 361)

اَلْحَمْدُلـِلّٰـه عَزَّوَجَلَّ, Dawat-e-Islami, the Madani movement of devotees of Rasool, is trying to serve Islam all over the world in more than 104 departments. The hides of sacrificial animals given by the devotees of Rasool also make a huge contribution to meet the enormous expenses of the Madani activities of Dawat-e-Islami. Therefore, donate your animal’s hide to Dawat-e-Islami and become deserving of continuous reward. May Allah عَزَّوَجَلَّ accept the sacrifice offered by every Muslim devotee of Rasool! 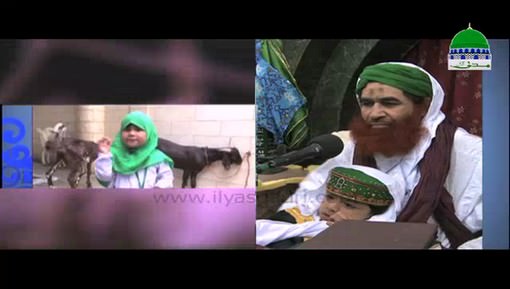 How Is It To Apply Fragrant Powder On Body Of Ritual Sacrifice Goat? 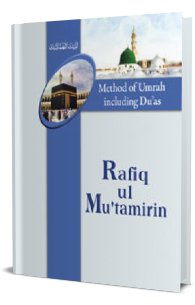 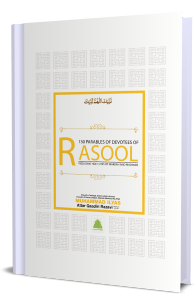 130 Parables of DEVOTEES OF RASOOL