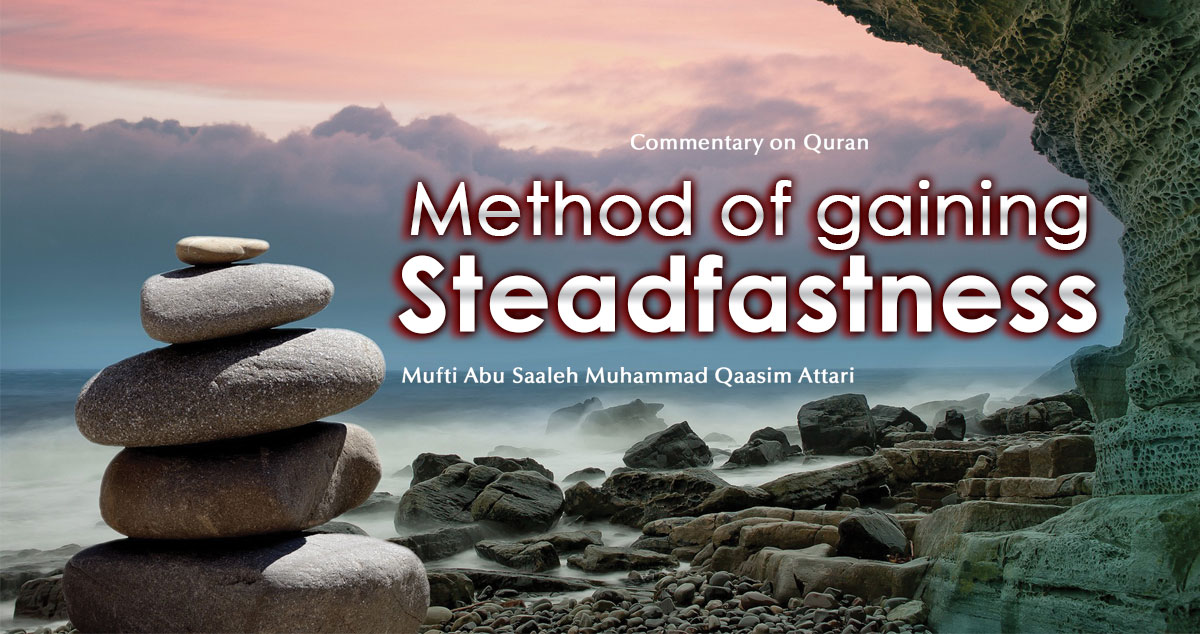 Translation: Indeed those who said, ‘Allah is our Lord’ then remained steadfast in it, the angels descend upon them, (saying), ‘Do not fear and do not grieve, and be happy about the Paradise which you used to be promised.’ (Part 24, Surah Haa-Meem As-Sajdah, Ayah 30)

We have learnt that the commandment of steadfastness has been given in the Holy Quran. Similarly, its great excellence, i.e. support and help from angels, good news of Paradise, hospitality and abundance of favours from the Almighty, have also been mentioned in the Holy Quran. In spite of this, the situation is the same as was mentioned in the first part of this article. Feeling emotions temporarily, people start offering Nawafil, reciting the Holy Quran and Salat-‘Alan-Nabi, making Zikr, delivering Dars and studying Islamic books, etc. But, after only a few days, enthusiasm fades and good deeds are given up.

Similarly, in the month of Ramadan or during a pious Ijtima’ or at the time of becoming disciple, we make a firm intention to give up sins, and for a few days, we manage to protect ourselves from sins but we get into our old habits of sins after only a few days. In fact, we end up drowning in the sea of sins from head to toe. Here a question arises as to what the method of gaining steadfastness is. An easy answer to this question is, there are certain deeds that are equally useful to gain steadfastness in faith, pious deeds and in refraining from sins, etc. In this article, those deeds will be described.

Among the things that are useful to gain steadfastness, the first one is to develop the mindset of performing good deeds and refraining from sins. If someone does not have this very thought in his heart and mind at all, he will not be enabled to perform any good deed, let alone gaining steadfastness. For example, a person will recite the Holy Quran and refrain from songs if he already has the mindset of doing so; but if he does not have this mindset, he will neither have steadfastness nor courage.

Another question arises as to how this mindset can be developed. The answer is, in order to develop this mindset, one is required to ponder over his claim of faith and over the facts of being the bondman of the Almighty and of reciting the Kalimah Tayyibah as well as over death and Hereafter. That is, he recites Kalimah, claims to have faith and to be the bondman of the Almighty, and he believes that he will certainly meet death and will be presented in the Divine court for accountability on the Day of Judgement. So, he should ponder what these facts require him to do. Pondering over these facts regularly will develop love for good deeds and hatred towards sins.

In order to gain steadfastness, the next important thing is courage. Courage is an attribute [quality] that certain humans are naturally gifted with. Some people are brave and highly courageous by birth. They have strong determination and very firm intentions. On the other hand, many people are not like these brave and courageous people; but this does not mean the Merciful Almighty has not bestowed courage and willpower upon them at all. He عَزَّوَجَلَّ has bestowed this wealth upon more or less everyone. Some people may be highly courageous, but they will gain nothing if they do not show courage. On the other hand, even those who have a lack of willpower will succeed if they make efforts. Allah عَزَّوَجَلَّ does not give commands to people more than their power. And He عَزَّوَجَلَّ grants reward according to the efforts made by people. The purpose of this explanation is that if man shows his courage without becoming defenceless and powerless while going against Nafs and Satan, so it is not difficult to defeat Satan. For example, at the time of Fajr, nobody forces us to keep lying on bed; or at the time of Zuhr and ‘Asr, nobody compels us to keep sitting in the office or shop. Instead, we keep lying willingly on bed or sitting in the shop. On the contrary, those who have made a firm intention not to miss Salah and not to make it Qada under any circumstances no matter the earth and the sky are replaced with each other, so these people get the privilege of offering Salah even by sacrificing all rest and work without any worry and bother. The same is the matter of sins. At the time of refraining from sins, determination and courage prove to be great help. For example, if there is a chance to gaze unlawfully, so it is not impossible to refrain from it. In fact, we have the capability to protect ourselves from it but we commit it because of being compelled by the desire of our Nafs. And this compulsion is the consequence of our own carelessness and weakness. There are thousands of others who have the mindset of not fulfilling the desire of their Nafs no matter how strongly their Nafs encourages them to look at a beautiful woman or boy. No matter how strongly their Nafs demands, they resolve not to satisfy its desire even if their souls leave their bodies. Those who attempt to refrain from unlawful gazing or any other sin with this resolve and courage, find it very easy to refrain from the sin.

Another question arises here as to how one can have such courage. The answer is, it is very easy to have this courage for those who have been given correct Islamic upbringing by their parents. Later on, their character was beautifully shaped by the teachings and manners taught to them in Masjid and Madrasah and then they developed a very great Madani mindset by virtue of some pious environment. They continued to refrain from bad company and kept from watching, hearing and thinking about sins. These people are very fortunate, courageous and steadfast. On the other hand, even if someone has not been blessed with these opportunities in his childhood and youth, Allah عَزَّوَجَلَّ has not also deprived them of His grace and bounty. If such people also bring some changes to their lifestyle, so it is possible for them to reach the rank of steadfastness. For example, in the present era, if a person keeps attending Masjid, keeps the company of the pious, keeps attending weekly Ijtima’, refrains from watching, hearing and thinking about bad things and tries to get into the habits of watching, hearing, speaking and thinking about good things, so he will develop love for good deeds and hatred towards sins within a short period of time. And by means of them, he will be blessed with the wealth of steadfastness.

There are also three more pieces of advice:

Firstly, always keep it in mind that one normally does not gain steadfastness in his first attempt, but rather repeated efforts are required. Therefore, if you miss a pious deed or commit a sin, you should not still lose courage. Instead, you should repent and make a fresh attempt again. Remember that those who continue to make efforts eventually find ways and achieve their aim.

Secondly, in order to gain steadfastness, it is vitally needed to refrain from bad company. If a person keeps good company and performs good deeds but he does not also give up bad company, so there is only a slight hope of him gaining steadfastness.