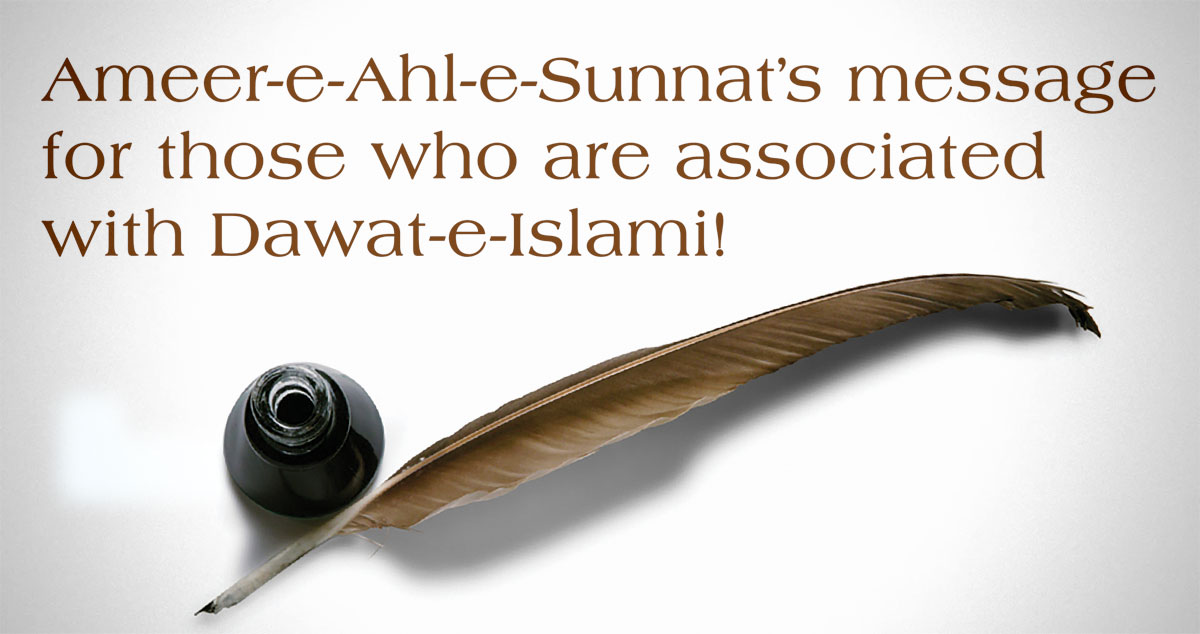 اَلْـحَمْـدُ لـِلّٰـه عَزَّوَجَلَّ In 1439 AH, Allah Almighty blessed me with the opportunity to perform Hajj and visit sacred Madinah along with the Nigran of the Markazi Majlis-e-Shura Haji Muhammad Imran as well as other Islamic brothers.

My dear Islamic Madani sons and daughters! I have very good feelings for those who carry out Madani activities abundantly. O Allah عَزَّوَجَلَّ! Forgive without any accountability the Madani sons and daughters who carry on efforts for 12 Madani activities and 8 Madani activities respectively and try to spend their lives as per Madani In’amaat. O Allah عَزَّوَجَلَّ! Bless them with the opportunity to perform Haj again and again. اِلٰہَ الْعَالَمِین! May this movement of Dawat-e-Islami continue forever for the sake of evergreen flowers of sacred Madinah and may it carry on Madani activities abundantly as long as Muslims are present. Now the time to depart from Madinah Munawwarah is coming. May Allah Almighty bless us with the opportunity to perform Hajj again and again and also bless us with the opportunity to see blessed Madinah again and again! May He عَزَّوَجَلَّ forgive all of you and me without any accountability! May Allah Almighty make my Hajj and the Hajj of all Hajis Mabroor (accepted)! May He عَزَّوَجَلَّ accept our visit to sacred Madinah! Aameen. Please carry on Madani activities of Dawat-e-Islami abundantly. Spend your life as per Madani In’amaat. اِنْ شَــآءَالـلّٰـه عَزَّوَجَلَّ, you will become righteous, pious and abstinent.

May Allah Almighty have mercy on all the honourable teachers, honourable students and Nazimeen of Jami’a-tul-Madinah lil Baneen and Madaris-ul-Madinah-lil-Baneen; the female teachers, Nazimaat and female students of Jami’a-tul-Madinah lil Banaat and Madaris-ul-Madinah lil Banaat; the honourable Muftis of Dar-ul-Ifta and the responsible Islamic brothers and associated Islamic brothers/sisters of all Majalis;. Carry on the Madani activities of Dawat-e-Islami and increase them as much as possible. Take part actively in serving Islam. Do listen to Madani Muzakarahs if any of you gets the opportunity. It is very necessary to attend weekly Sunnah-inspiring Ijtima regularly because it is one of the earliest activities of Dawat-e-Islami. In fact, there is no harm in it if it is called the first Madani activity. It can be understood like this that it is the weekly Sunnah-inspiring Ijtima through which the Madani activities have been gradually spread all over the world. Of course, Madani Qafilah is the backbone of Madani activities, and it is not possible to perform Madani activities without it. Therefore everyone should continue to travel with Madani Qafilahs and become deserving of the Du’a of Attar. Just think I love the one very much who carries out more and more Madani activities. It is as if our life depends on Madani activities, and without them we are dead. If we become billionaires after giving up Madani activities, our life is totally useless. May Allah عَزَّوَجَلَّ bless us with the opportunity to serve Islam until the end of our life! May Allah Almighty bless all of you with the privilege to become the neighbour of the Beloved Rasool صَلَّى اللّٰهُ تَعَالٰى عَلَيْهِ وَاٰلِهٖ وَسَلَّم in Jannat-ul-Firdaus! May all these Du’as also be accepted for me and my family! 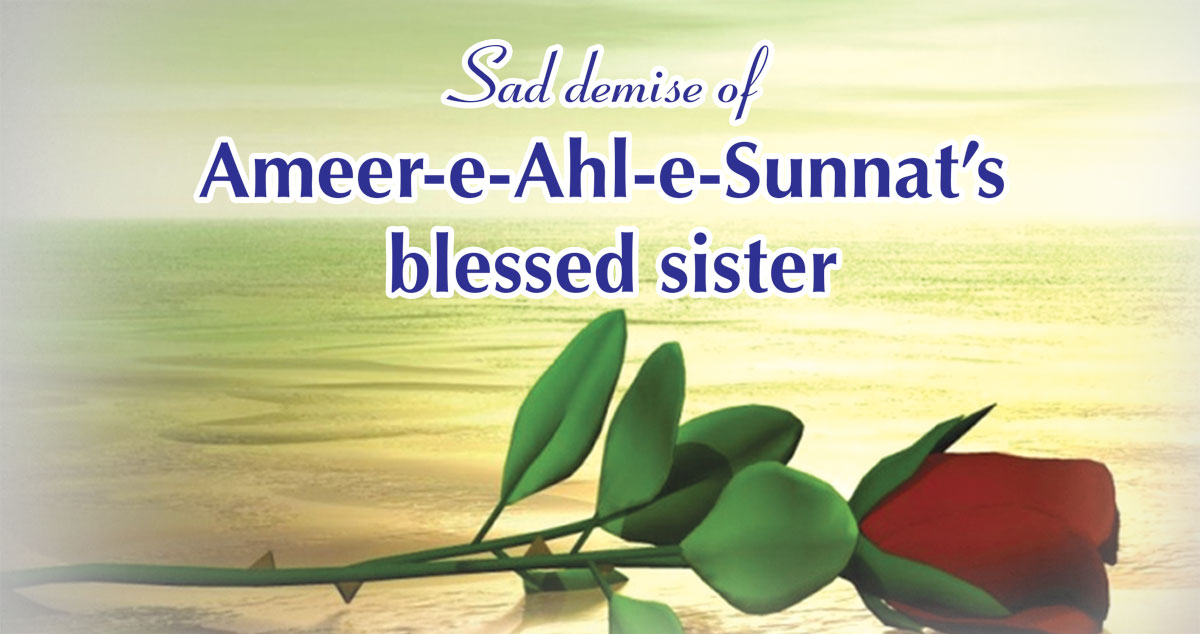 My father “Haji Abdur Rahman Qaadiri” passed away when I was one and a half or 2 years old. When I grew into a young man, my elder brother ‘Abdul Ghani Sahib’ passed away in a train accident. My mother was a righteous and pious woman. Despite facing serious financial problems, she gave us upbringing as per Islamic values and principles but after a short period of the demise of my elder brother, she also departed this life.

On this sad occasion, I wrote an Istighaasah in the court of the Beloved Rasool صَلَّى اللّٰهُ تَعَالٰى عَلَيْهِ وَاٰلِهٖ وَسَلَّم:

Under such intensely distressing circumstances, my elder sister late “Fatimah Bint-e-Haji Abdur Rahman”, who was 7 to 10 years older than me, took care of us, fed us, brought us up and even continued to support us even when we were young. She was a very wise woman. Due to a disease, her body gradually stopped functioning, making her unable to walk and get up. Despite this fact, she was the most active person in our house. She even used to cook food before she fell ill. Her illness had been getting serious for one and a half years. During the last days of her life, she was so ill that she was not able to even recognise me and when she would recognise me after I would give her my brief introduction then she would start weeping. Last time when I went to meet her, she could not recognise me, so, I did not introduce myself either to prevent her from weeping because if she wept, I would feel sad. The truth is that since she fell ill our house had become a desolate place. After her demise, my daughter-in-law sent me a written message: “Despite her illness she used to show great affection towards me (daughter-in-law). Her demise made our house desolate.” As I am also an old person, I have an elder sister who is an elderly woman as well as the mother of my children is also an elderly woman; therefore, from illness to demise, my late sister lived in the house of Haji Ubayd Raza under his care where Haji Ubayd Raza Attari and my daughter-in-law looked after her health well, gave her every support and treatment. All the funeral rites were also performed at the house of Haji Ubayd Raza. The way my son ‘Ubayd Raza’ served her, I believe, he has truly fulfilled the right of Silah Rihmi (kind relationship with relatives).

Haji Ubayd Raza said: “When my paternal aunt was admitted in the hospital I would introduce myself to her repeatedly but she would not reply. When I would recite Salam or Salat in front of her, she would feel a little better.” He further stated: “When her health deteriorated she was about to be taken to the hospital, but she recited Salat and fell unconscious. Since then, she had made no recovery, and finally passed away in the hospital on 26th Zul-Hijja-tul-Haraam 1439 AH corresponding to 7th September 2018. After Ghusl [ritual bath], her face became very bright, gleaming and luminous.”

On 10th September 2018, 1198 students, teachers and Nazimeen-e-Kiraam had privilege to observe Sawm on Monday, acting upon the blessed Sunnah of Beloved Rasool صَلَّى اللّٰهُ تَعَالٰى عَلَيْهِ وَاٰلِهٖ وَسَلَّم and sent its reward to the late sister of Ameer-e-Ahl-e-Sunnat.

Messages of condolence on behalf of blessed Scholars and Dignitaries

Messages of condolence were received from many blessed scholars and dignitaries. Some of them are as follows: 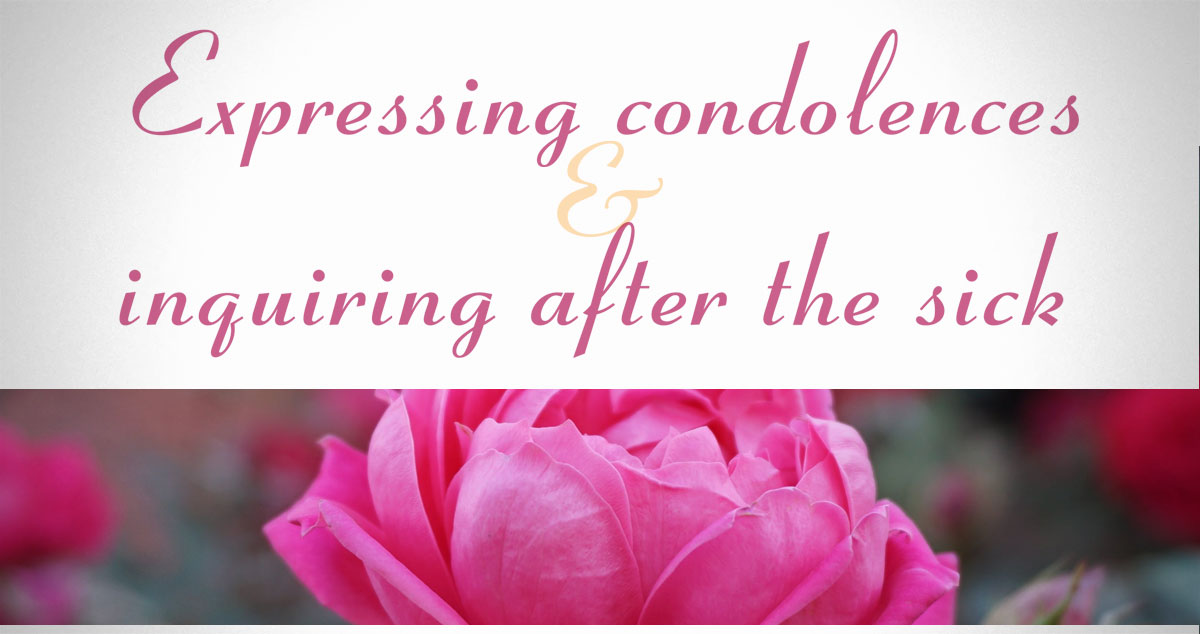 Death is an inevitable reality which has to be tasted by every soul. This is a reality that everyone acknowledges. When someone passes away it is as if calamity befalls the households. On such an occasion, it is natural for the close relatives to be grieved. Condolence offered in conformity with Islamic teachings not only comforts the family of deceased, it also shows that Islam has not left its followers alone under any circumstances. Islam has introduced such great principles that nobody feels lonely on the journey of life. Ponder! When someone close has left the world, the bereaved family is deeply grieved and sorrowful and in such situation, if an Islamic brother comes to comfort and console the bereaved family, and encourages them to carry on with the journey of life, one feels that how beautiful is the system of condolence in Islam! Generally, some of the relatives and friends of the deceased get to attend the funeral while others are unable to attend it due to some reasons. When should they come to the family of deceased and offer their condolences? For them, Islamic Shari’ah has fixed three days from the time of death. After this period, it is Makruh as it will remind the family about their grief. However, one can offer condolence later than the mentioned period of time if the bereaved or the condoler is not there or if available, he (condoler) is unaware of it. (Jauharah Nayyirah, pp. 114; Rad-dul-Muhtar, vol. 3, pp. 177)

Definition and ruling for condolence

Comforting someone to have patience over any grief, falls under condolence. Muslims of past era used to take the grief of others as their own grief. This is changing now and offering condolence is just getting to be a formality. Parable: Sayyiduna A’mash رَحْمَةُ اللّٰهِ تَعَالٰی عَلَيْه said: When we would attend funerals, everyone in the crowd seemed so grieved that we couldn’t figure out who should we offer condolence. (Ihya-ul-Uloom, vol. 5, pp. 235)

2 The one who offers condolence to the grieved, Allah عَزَّوَجَلَّ will make him wear two of the dresses from Jannah which are worthier than the world. (Mu’jam-e-Awsat, vol. 6, pp. 429, Hadees 9292)

There is no doubt that the family of deceased are sorrowful and apprehensive of many things. Supporting them at such a crucial time is great help. Condolence decreases the troubles of deceased’s family and smooths the way for the fulfilment of their needs. This occasion turns out to be of praying for forgiveness for the deceased Muslim and conveying the rewards by performing good deeds. Condolence not only promotes unity and sympathy amongst the Muslims, it is also a means of virtuous deeds like having kind relationship, consoling and well-wishing. Above all, it pleases Allah عَزَّوَجَلَّ and His Rasool صَلَّى اللّٰهُ تَعَالٰى عَلَيْهِ وَاٰلِهٖ وَسَلَّم.

1 Time for condolence is three days after death. Later, it is Makruh. However, if one meets the family of deceased later or gets to know it later, he can offer his condolence.

3 Words used for condolence should be kind, offering solace, patience and pleasure. It is mentioned in Ihya-ul-Uloom that while offering condolence, one should express sadness. (Ihya-ul-‘Uloom, vol. 2, pp. 264)

4 When gathered to offer condolence, instead of gossiping, doing Zikr with the intention of conveying the reward to the deceased is better for the deceased and for one’s own Hereafter. 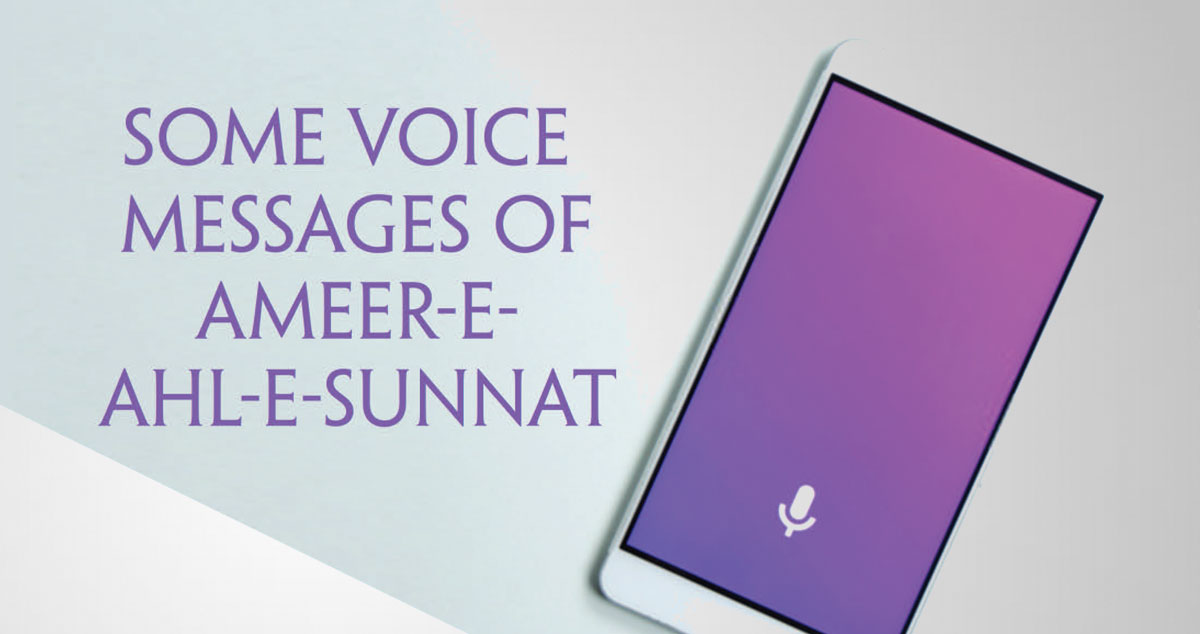 You sent a clip of your Madani Mashwarah in which the Islamic brothers who were present expressed their deep devotion.
Read Article 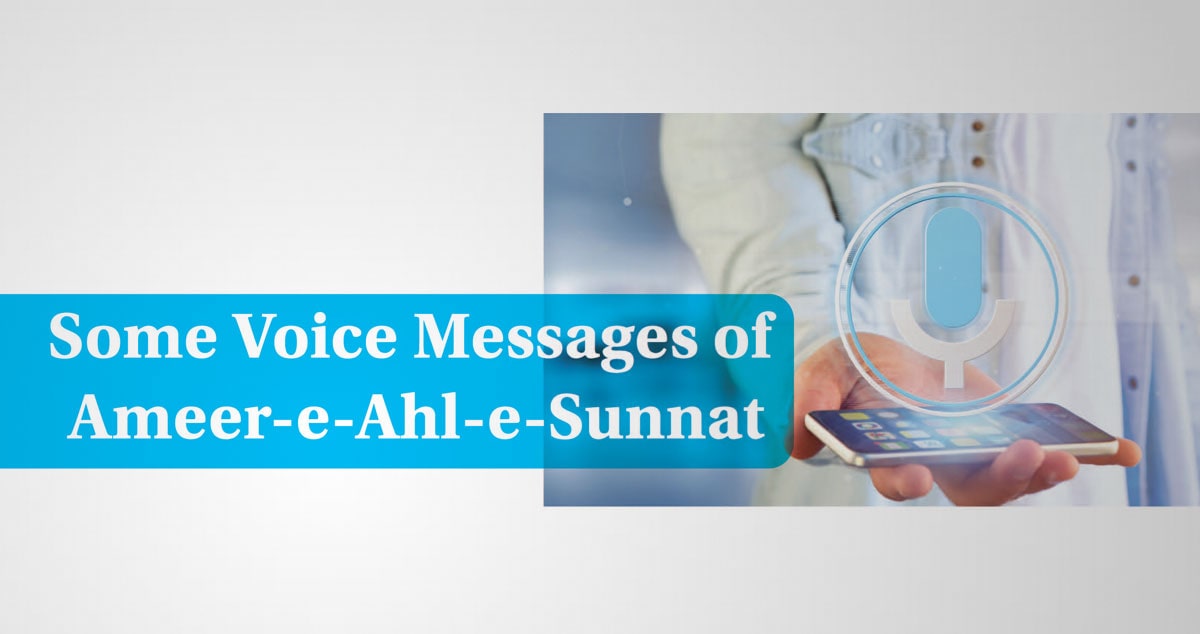 Due to being ill on the blessed eleventh night of Rabi’-ul-Aakhir 1441 AH, I was unable to attend the blessed programme of the blessed night.
Read Article 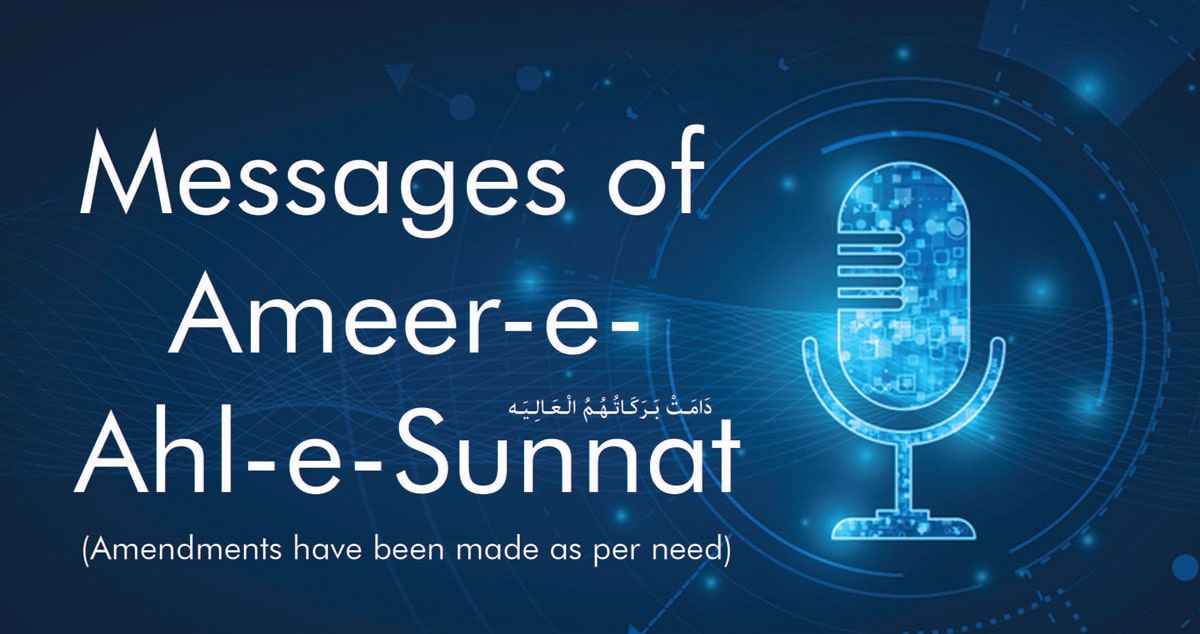 I saw you Islamic brothers along with Haji Ubaid Raza Attari Madani and Rukn-e-Shura Haji Azhar Attari in a video clip.
Read Article 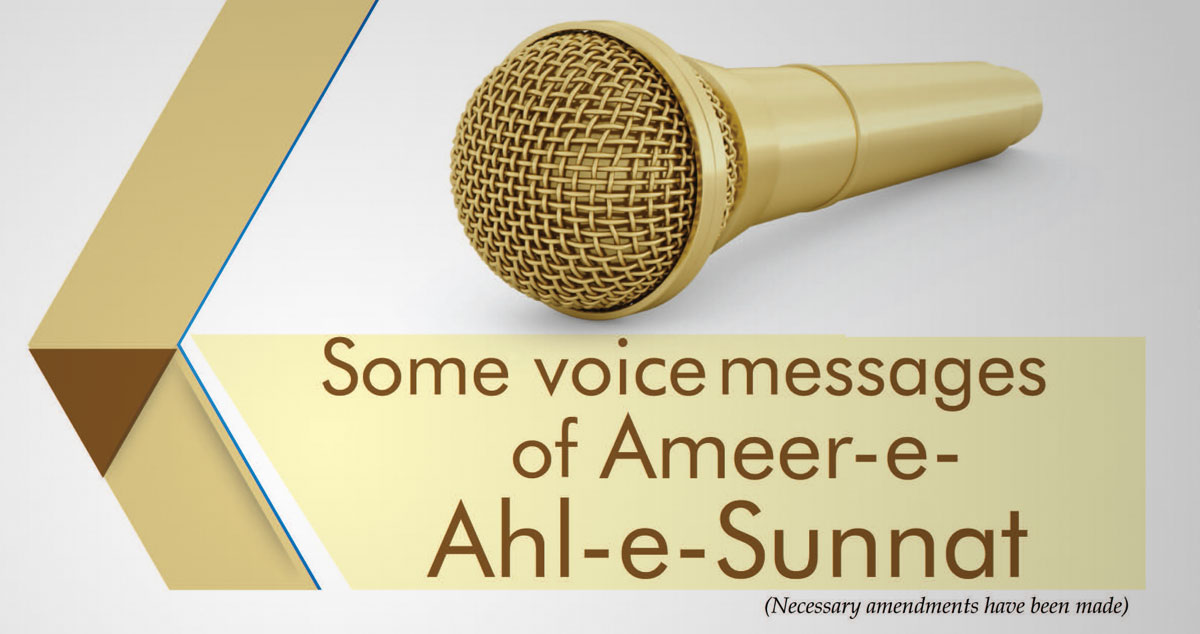 May Allah عَزَّوَجَلَّ raise your honour, remove your worries, and bless you with patience by the blessings of the honourable personages
Read Article 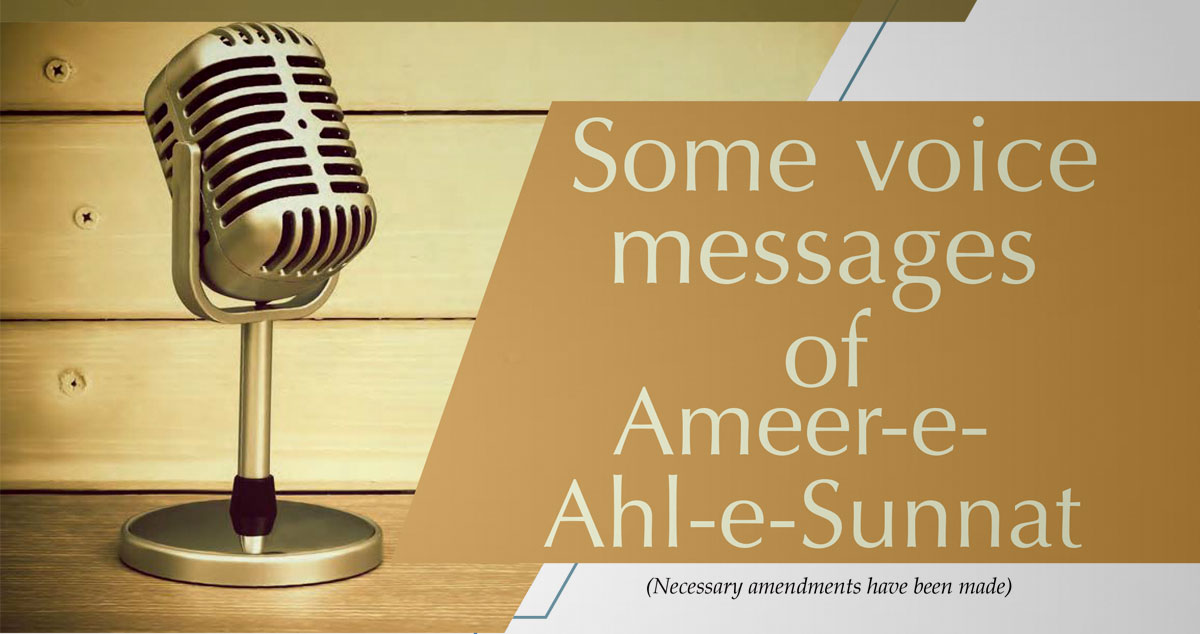 Words of encouragement for the students of Jami’a-tul-Madinah, Ahmedabad, India, upon not using mobile phones:
Read Article 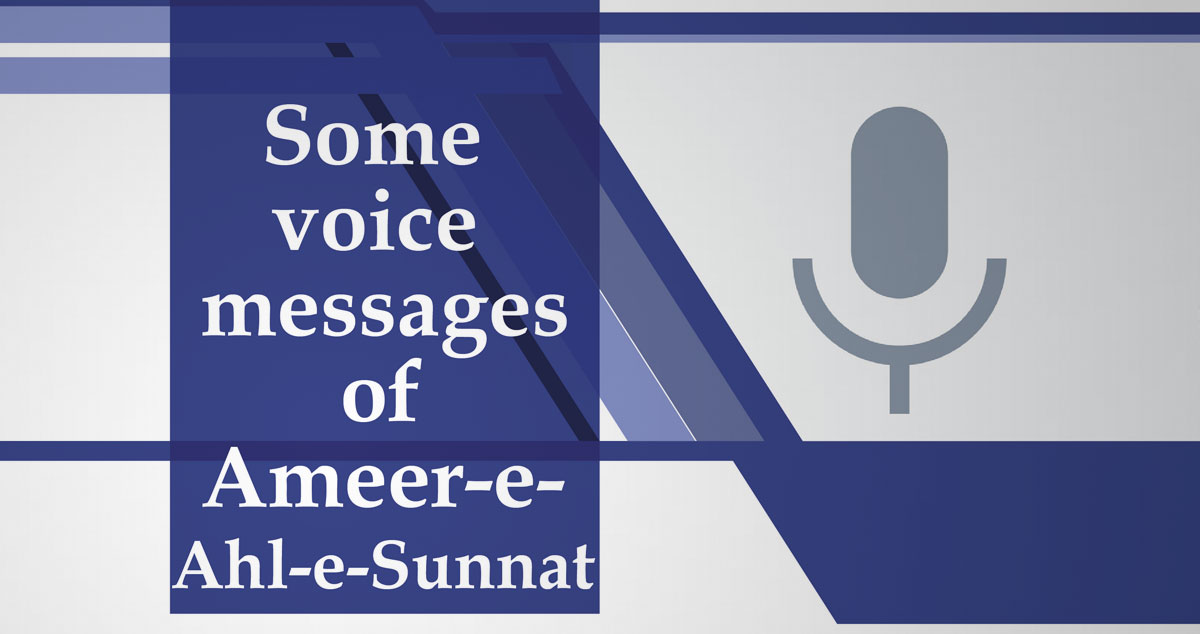 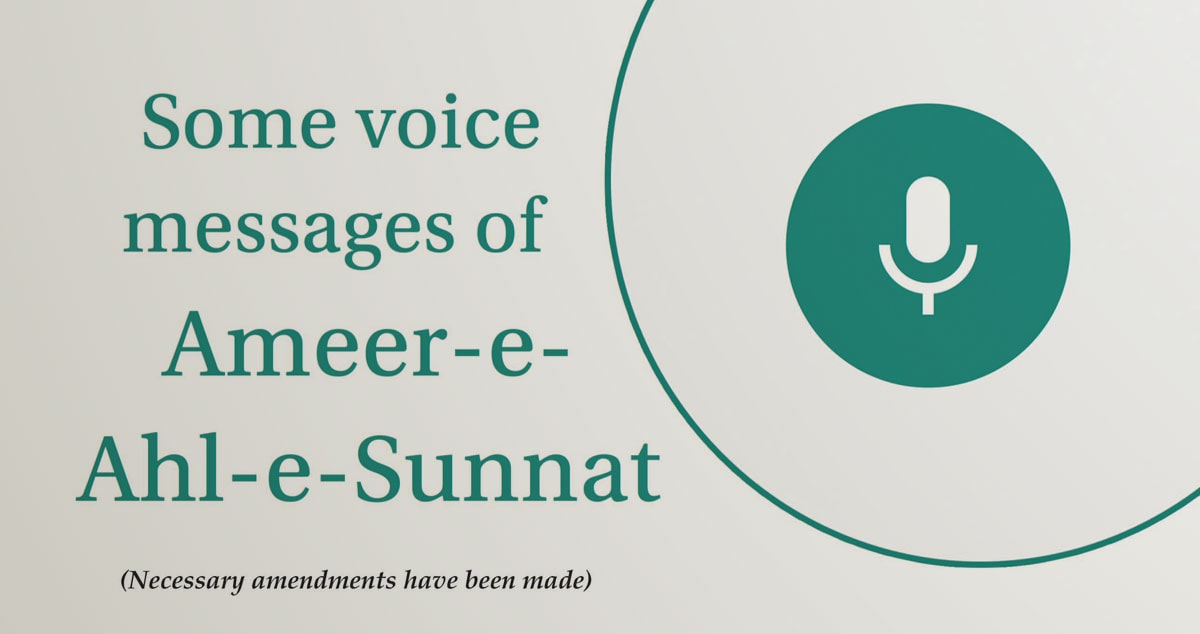 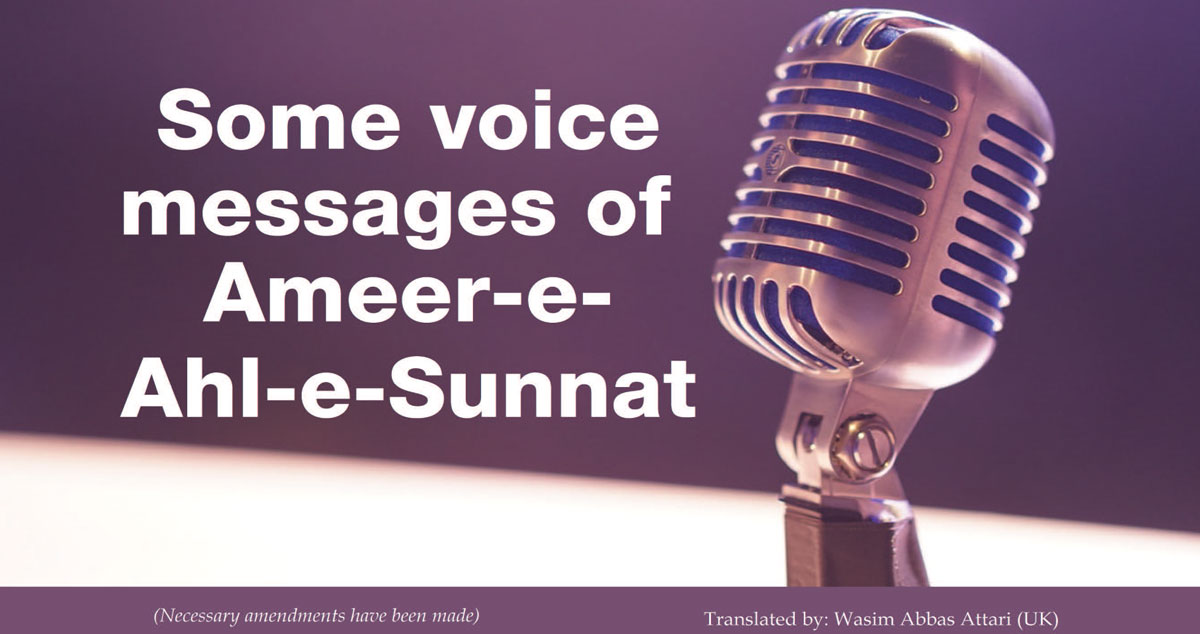 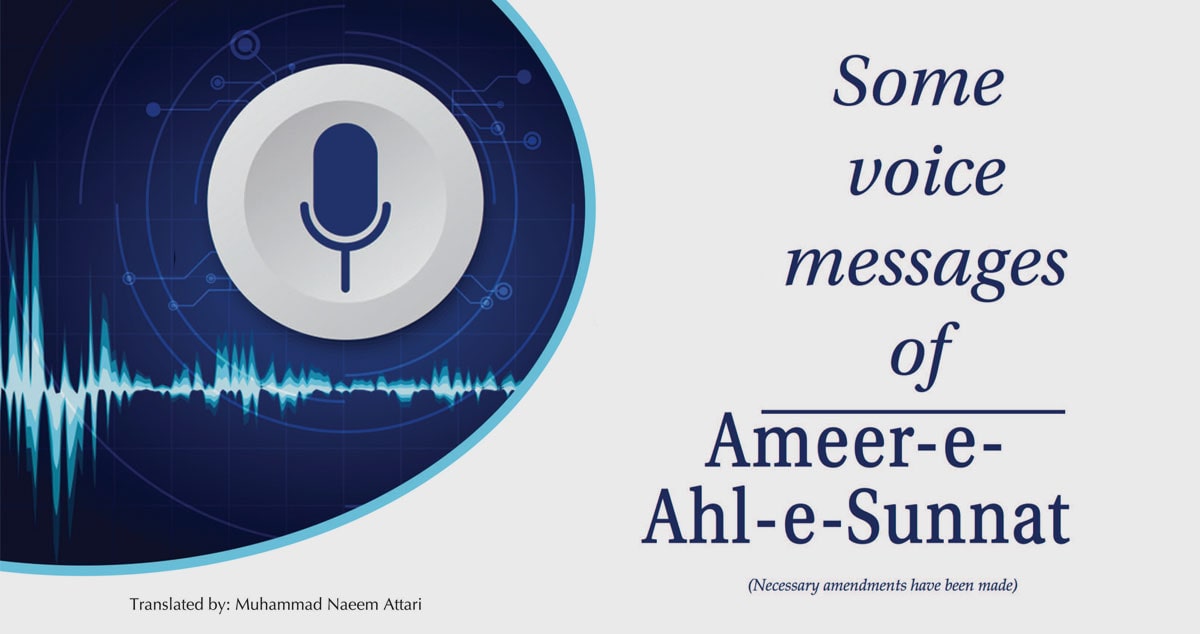 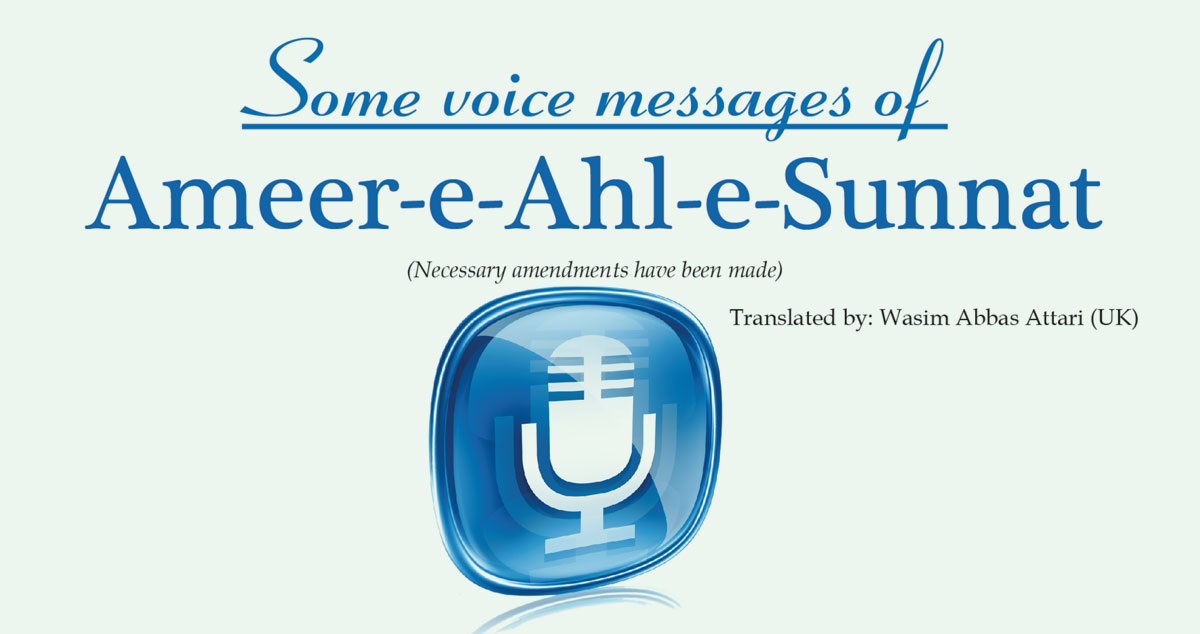 Listening to the Madani pearls of Nigran-e-Shura in the program “Zehni Azmaish (Season 10)”, one Madani Islamic brother sent two tear-jerking voice messages in the
Read Article 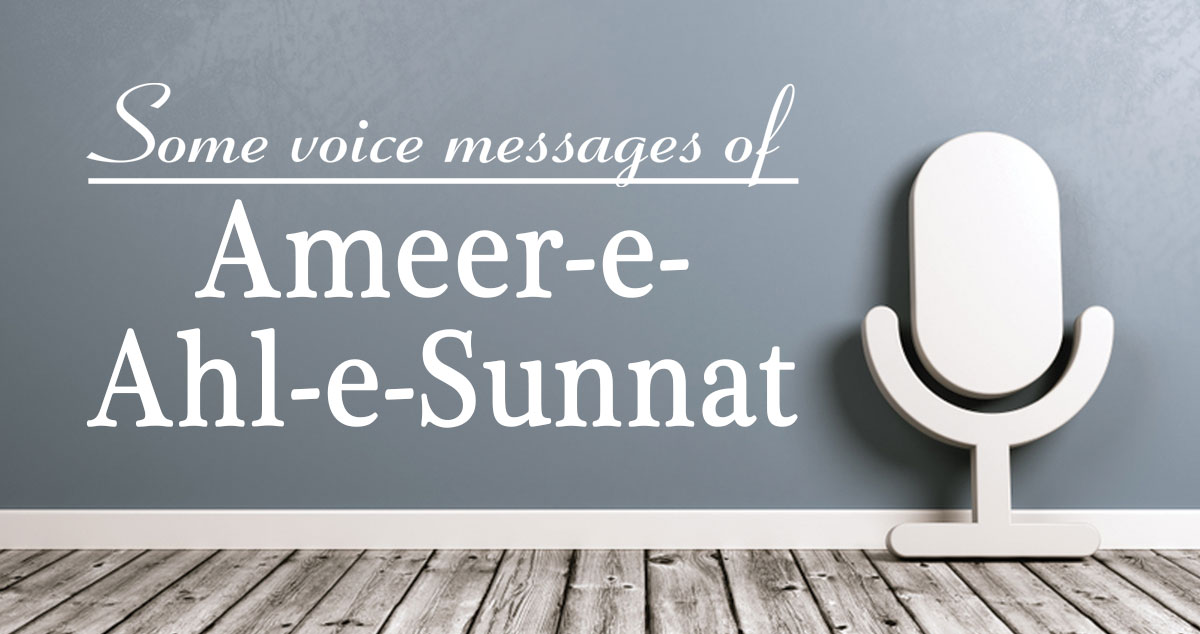 On Saturday, 16th February 2019, ‘Uloom-ul-Quran Conference was held at government level in the conference hall of Umm-ul-Qura (an Islamic institution)
Read Article 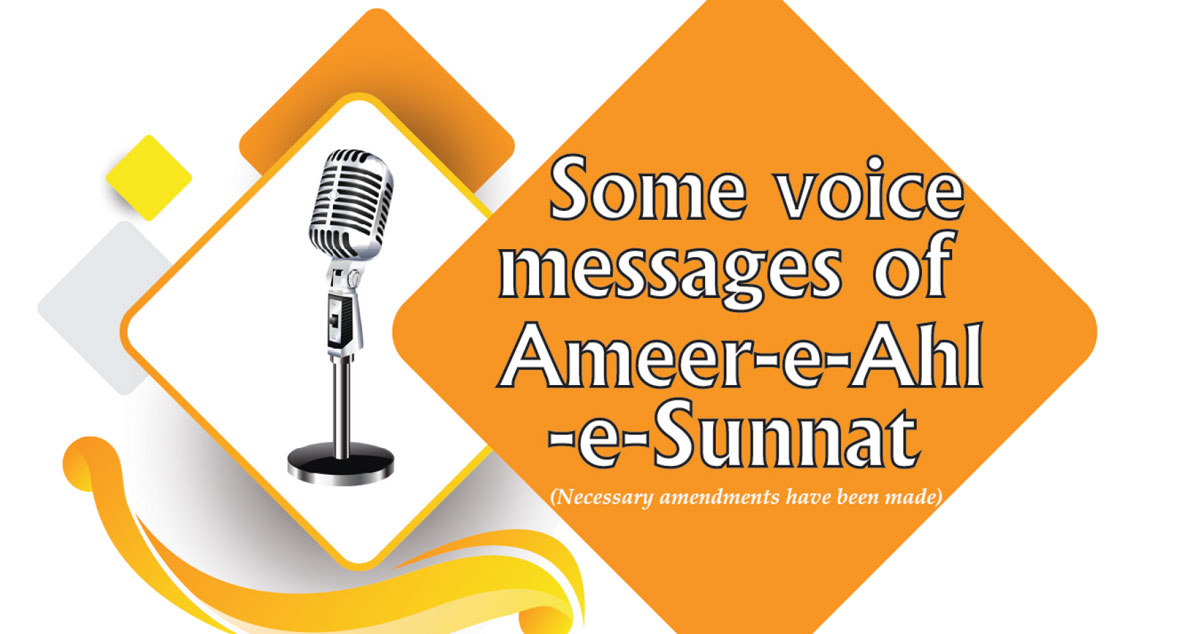