On the other hand, Yazeed was aware that as long as Imam Husayn رَضِىَ الـلّٰـهُ عَـنْهُ was alive, he would not gain the opportunity to accomplish his obscene desires. It is for this reason that he forcefully imposed a war and martyred Imam Husayn رَضِىَ الـلّٰـهُ عَـنْهُ and his allies in the plain of Karbala. (Note: To read a detailed account of the incident of Karbala, read Maktaba-tul-Madinah’s publications ‘Aainah-e-Qiyamat’ and ‘Sawanih Karbala’)

Dear Islamic sisters, the clouds of troubles and worries are casted over the one who treads on the path of serving the religion of Islam. Some become a target of oppression and cruelties, while others are adversely affected by sneers. It is possible that you too will experience jibes whilst engaging in the blessed task of spreading the invitation towards righteousness. Some may refer to you as ‘the Quran-teaching sister’ in a disparaging way, others will hurt your feelings by referring to you as a teacher of religious studies in a derogatory manner, and some will even taunt you for abstaining from unveiling yourself. However, you should set aside the taunts of people and serve the religion brought to us by the grandfather of the honourable Hasan and Husayn, the Holy Prophet صَلَّى الـلّٰـهُ عَلَيْهِ وَاٰلِهٖ وَسَلَّم. If, Allah forbid, you find yourself having to face inappropriate remarks made by people, then remember the sorrow of Sayyidatuna Shehr Baano, Sayyidatuna Zaynab, Sayyidatuna Sakeenah and the widows of the numerous martyrs of Karbala رِضْوَانُ اللہِ تَعَالٰی عَلَیْہِمْ اَجْمَعِیْن. One can only imagine how these honourable ladies must have felt upon witnessing those beloved to them being martyred. Upon envisaging the cruelty that they faced, you will find your pain to be far less. In actual fact, as stated by Ameer Ahl-e-Sunnat, when you think of the scenes [of Karbala], you will acknowledge that your difficulty is actually minor and you will laugh at yourself, thinking ‘Am I even facing a difficulty?’

Therefore, whilst holding firm onto the rope of patience, live this short life according to the Shari’ah and Sunnah. Keep yourself associated with the Madani environment of Dawat-e-Islami and continue to invite Islamic sisters towards goodness. 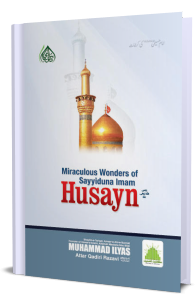