Translation: Allah Almighty will not take away knowledge by taking it away from (the hearts of) the people, rather He will take it away through the passing away of the (religious) scholars, to the extent that when no scholar remains, people will take ignorant people as their leaders, who will be consulted regarding (Shar’i) rulings and will give verdicts without knowledge. They themselves will be misguided and they will (also) misguide (others). (Bukhari, vol. 1, p. 54, Hadees 100)

Explanation of the Hadees

From this Hadees, it is clear that a time will come when knowledge will be taken away from the world; and this taking away of knowledge will not be in the form of it being forgotten or snatched from the hearts, but rather, it will occur through the passing away of the scholars. The commentator of Bukhari, Sayyiduna ‘Allamah Abul Hasan Ali Ibn Khalaf, commonly known as Ibn Battaal رَحْمَةُ الـلّٰـهِ عَلَيْه  writes: ‘This means that it does not befit the majesty of Allah Almighty to give knowledge to His creation from His grace and then take it back, as He is Exalted above gifting creation the knowledge that leads to recognition of Him as well as belief in Him and His Prophets, and then taking it back from them. Rather, the taking away of knowledge will occur through people wasting time instead of obtaining knowledge. Then, amongst the living, they will not find any person who can become a successor of the people of knowledge who have passed away.’ (Sharh Al Bukhari li Ibn Battaal, vol. 1, p. 177)

Regarding the section of the Hadees that states اِتَّخَذَ النَّاسُ رُءُوسًا جُهَّالًا ۔۔الخ, Sayyiduna Badr-ud-Deen ‘Ayni رَحْمَةُ الـلّٰـهِ عَلَيْه , the commentator of Bukhari, stated, ‘People will take those who are ignorant as their guides, and then they (the ignorant folk) will make decisions about the religion of Allah Almighty according to their own opinions and will issue fatwas (i.e. verdicts) in accordance with their own ignorance.’ After writing this, he states that Qadi ‘Iyaad رَحْمَةُ الـلّٰـهِ عَلَيْه  said ‘We have found this to be the case in our time, just as the Holy Prophet صَلَّى الـلّٰـهُ عَلَيْهِ وَاٰلِهٖ وَسَلَّم foretold.’ Shaykh Qutb-ud-Deen رَحْمَةُ الـلّٰـهِ عَلَيْه  stated ‘Qadi Iyaad said this about his own time, despite the abundance of scholars then, so what about the state of our time now?’ ‘Allamah ‘Ayni رَحْمَةُ الـلّٰـهِ عَلَيْه says, ‘When Shaykh Qutb-ud-Deen wrote this, he was speaking at a time when there was a large number of scholars and Fuqaha (i.e. jurists) who were adept in the four madhabs (schools of Islamic law), in addition to numerous Muhaddiseen (Hadees scholars) - so if that was the state at that time, what about our own time?’ (‘Umda-tul-Qaari, vol. 2, p. 116, Hadees 80)

Dear Islamic brothers! When this was the situation 800 years ago, then what about our state in the current era now? We seek refuge! This is the era in which we have to safeguard our beliefs and actions through great precaution and a vigilant mind.

The death of scholars, an irreparable loss

The death of the noble scholars is an irreparable loss. Take note of the following six narrations:

1.   Ameer-ul-Mu’mineen Sayyiduna Umar Farooq al-A’zam رَضِىَ الـلّٰـهُ عَـنْهُ said: ‘The death of one thousand worshippers who fast during the day and stand up in prayer during the night is less significant than the death of one scholar who understands what Allah Almighty has declared Halal and Haraam.’ (Jami’ Bayan-il-Ilm-wa-Fadlihi, p. 42, Raqm 115).

2.   It is reported from the Lion of Allah, Sayyiduna Ali-ul-Murtada رَضِىَ الـلّٰـهُ عَـنْهُ ‘When a scholar passes away, 77 thousand highly-ranked angels accompany him on his departure, and the death of a scholar is such a gap in Islam that cannot be covered until the Day of Judgement.’ (Al Faqih Wal Mutafaqqih, vol. 2, p. 198, Raqm 856)

4.   Sayyiduna Sa'eed Ibn Jubayr رَضِىَ الـلّٰـهُ عَـنْهُ said ‘The passing away of the scholars is a sign of the destruction of the people.’ (Daarimi, vol. 1, p. 90, Hadees 241)

5.   Sayyiduna Hassan Basri رَضِىَ الـلّٰـهُ عَـنْهُ stated ‘The death of a scholar is such a gap in Islam that cannot be filled by anything for as long as the cycle of day and night continues.’ (Jami’ Bayan-il-Ilm-wa-Fadlihi, p. 213, Raqm 654)

6.   Sayyiduna Sufyan Ibn ‘Uyaynah رَحْمَةُ الـلّٰـهِ عَلَيْه states ‘For those without knowledge, what greater calamity can there be than the death of those with knowledge?!’ (Sharh-ul-Sunnah-lil-Baghawi, vol. 1, p. 249)

An example to understand the importance of scholars

Sayyiduna Imam Abu Bakr Aajurri رَحْمَةُ الـلّٰـهِ عَلَيْه  states ‘O people! What do you think of a path with many difficulties and dangers which people are compelled to traverse during a pitch black night? If there is no light along the path, then the people will remain distressed. So, Allah Almighty places lamps along the path for them through which they obtain light and then people begin to walk with peace and tranquillity on this path. Then the people after them come and they also need to traverse this path. All of a sudden, the lamps are extinguished and they are left in darkness. The example of the scholars amongst the lay people is the same. The vast majority of people do not know how to fulfil Faraid (i.e. obligatory acts), how to safeguard themselves from Haraam actions, and how to worship Allah Almighty. Only with the existence of the scholars can we find the answers to these questions. So, when there are no more scholars, the lay people will be left confounded and distressed. With the passing away of the scholars, knowledge will end and ignorance will become widespread.’ (Akhlaq-ul-Ulama lil Aajurri, p. 30)

Dear Islamic brothers! The passing away of the scholars is something for us to ponder over. Hence, there is a desperate need for us to appreciate and honour the scholars, and to give our full attention to gaining Islamic knowledge. Make your children memorise the Holy Quran and make them scholars too.[2]

Knowledge only exists with the existence of the scholars. When Allah Almighty raises the scholars from this world, the ignorant will take their place and talk about religion in such a way that they themselves will be misguided and they will also misguide other people. The spread of religious interpretations based just on personal desires that go against the beliefs of the Ahl-us-Sunnah and the teachings of the blessed companions is now common on the Internet. Every Muslim should remain closely attached to those scholars local to them who have love for the Prophet, and they should seek Shar’i guidance only from the Muftis of Ahl-us-Sunnah in all matters.

In addition, young scholars have a greater responsibility to strive to fulfil the gap left by their predecessors on the vital forefronts of protecting the beliefs and practices of Muslims, delivering speeches, teaching, and producing literary works for the moral and educational guidance of the new generation.

[1] Those scholars who can carry independent reasoning. 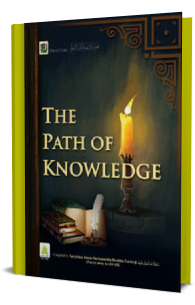 The Path of Knowledge