The Delegation of Dawat-e-Islami Meets the President of Pakistan 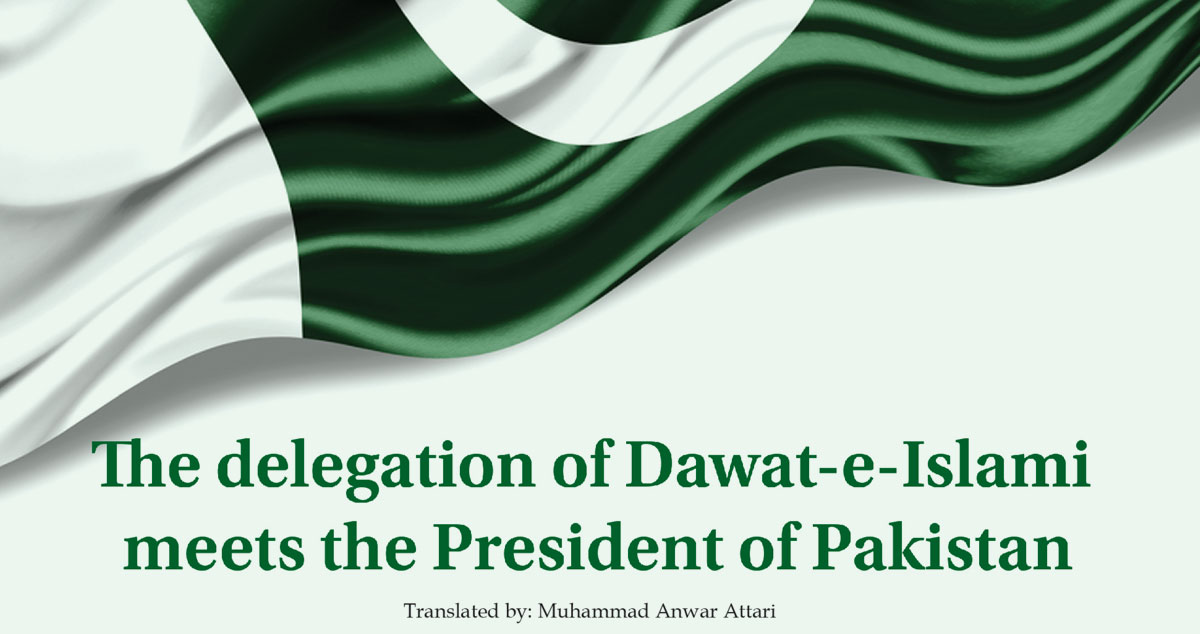 On 23rd February 2019, Maulana Muhammad Imran ‘Attari مُدَّظِلُّەُ الْعَالِی, the Nigran of Markazi Majlis-e-Shura of Dawat-e-Islami, along with Maulana Abdul Habib Attari, the member of Shura, and members of Majlis Rabitah met Doctor Arif Alvi, the President of Pakistan, at Governor House, Bab-ul-Madinah, Karachi. During the meeting, propagation of Islam in Pakistan and rights of people were discussed, whereas Nigran-e-Shura delivered a letter consisting of seven points to the President of Pakistan.

Such a system for offering Salah should be made in all government sectors in which all should offer Salah at the time of Salah.

Wine is becoming common in our beloved country, Pakistan. Due to it, families and society are being destroyed and the number of accidents is going up. Currently, Pakistan is at number 35 regarding drinking wine, therefore effective steps should also be taken to stop wine.

A Muslim should have the proper sense that in the presence of interest economy cannot develop. For the sake of Allah Almighty! The country and nation should be saved from this curse.

All those websites which can damage our religious beliefs and manners should be blocked in Pakistan. It will not only make our Hereafter better, but, if Allah Almighty willing so, the abilities of our nation will also increase.

7. Taking care of rights of people during tree planting

The rights of people should be protected during the campaign of planting trees at the government level. During tree planting campaign Dawat-e-Islami is ready to serve wherever its services are required.

The President of Pakistan read the letter completely and agreed on the seven points which Dawat-e-Islami raised on these problems. The delegation gave Doctor Arif Alvi a briefing on the Madaris-ul-Madinah, Jami’aat-ul-Madinah and Dar-ul-Madinah International Islamic School System which are being run under the supervision of Dawat-e-Islami and made a request for the cooperation to establish Dar-ul-Madinah University in Islamabad.

Praising the efforts Dawat-e-Islami is making for propagating Islam, the President of the Islamic Republic of Pakistan said: ‘Madani Channel should play its role in stopping the women rights violations on the matters of inheritance because Madani Channel is watched by millions of people. The delegation invited Dr. Arif Alvi to visit global Madani Centre Faizan-e-Madinah and presented him a gift of books of Maktaba-tul-Madinah and a Monthly Magazine Faizan-e-Madinah. 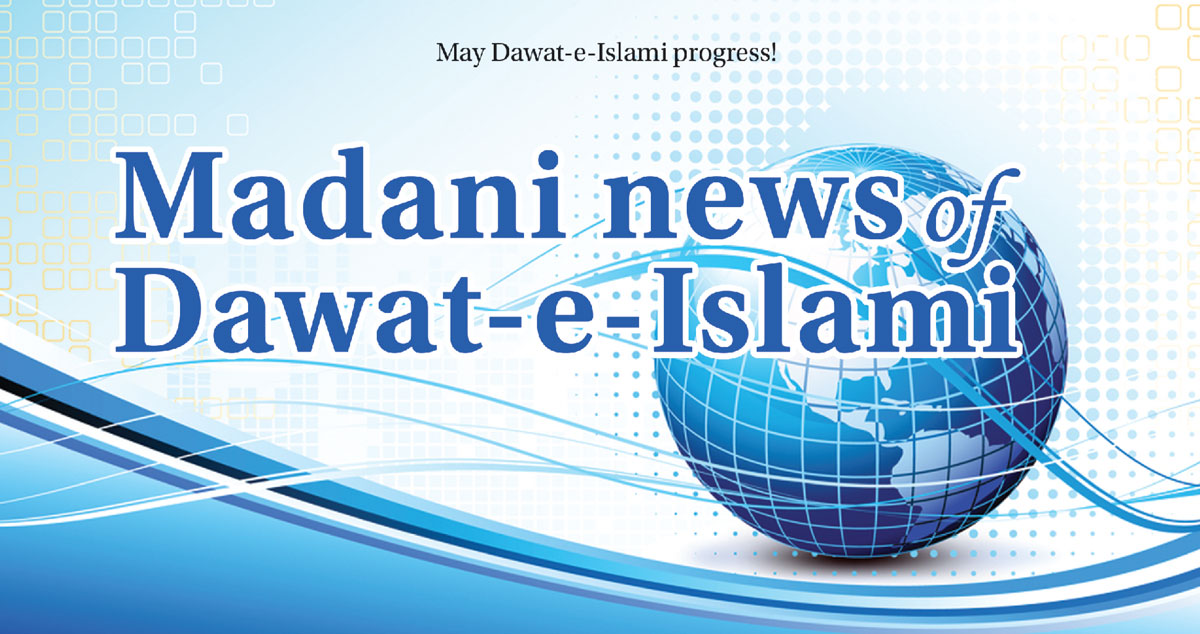 Completion of lessons from of the book “Shifa”

Lessons from the book “Shifa” [شِفَاء] had been in progress on Madani Channel for three years. On March 3, 2019, the series of these lessons completed. Ameer-e-Ahl-e-Sunnat دَامَتْ بَرَكَاتُـهُمُ الْعَالِيَـه gave complimentary remarks about the teacher, Hafiz Hassaan Attari Madani, expressing congratulations. Mufti Muhammad Qasim Qaadiri also delivered his speech on this occasion.

Zehni Azmaish is one of the popular programmes broadcast on Madani Channel. Its final was held on 28 February, 2019 at the global Madani Markaz, Faizan-e-Madinah Bab-ul-Madinah Karachi between the teams of ‘Karachi’ and ‘Lahore’. After a thrilling contest, the Lahore team won. Members of Shura and a huge number of devotees of Rasool attended it.

On 23rd February, 2019, the Nigran of Shura Maulana Muhammad Imran Attari, a member of Shura Maulana Abdul Habib Attari and other responsible Islamic brothers visited the ailing Mufti Muneeb-ur-Rehman – the Chairman of Pakistan’s Moon-sighting Committee. They prayed for his recovery and conveyed to him the voice message of Ameer-e-Ahl-e-Sunnat دَامَتْ بَرَكَاتُـهُمُ الْعَالِيَـه. The honourable Mufti also expressed his thanks to the Nigran of Shura.

٭   On 25 February, 2019, a Madani Mashwarah of Majlis Waqf Properties was held. Respected Muftis, the Nigran and some members of Shura also attended it.

The Nigran of Pakistan Intizami Kabinah had a Madani Mashwarah with the teachers and administrators of Jami’a-tul-Madinah for girls via a satellite link. The attendees observed Islamic veil.

Inauguration of Masajid and Madaris-ul-Madinah

Completion of Hifz and Naazirah Quran in short period of time

A student from Madrasa-tul-Madinah (Daharki), Qurban Attari, memorized the entire Quran within only 9 months and 21 days. Another student, Shahzaib Aurangzeb completed “Madani Qa’idah” and “Naazirah Quran” within only 54 days.

Currently, more or less 155,695 Islamic brothers are getting Quranic education at 23,200 Madaris-ul-Madinah for adults all over Pakistan.

By the grace of Allah, Dawat-e-Islami has been holding weekly Sunnah-inspiring Ijtima’aat after Salat-ul-Maghrib on every Thursday at thousands of places within and outside Pakistan. Millions of devotees of Rasool attend these Ijtima’aat.

٭   On 12 March, 2019, a great Ijtima’ for teachers was held in Hafizabad. Over 2000 teachers and other individuals related to the profession of education attended it.

٭   On 25 February, 2019, a Sunnah-inspiring Ijtima’ was held at the Islamic International University, Islamabad. A member of Shura Haji Waqar-ul-Madinah ‘Attari delivered his speech.

٭   On 22 February, 2019, Majlis Doctors in collaboration with Majlis Education held a Sunnah-inspiring Ijtima’ at Benazir Medical University, Larkana. The principal, professors, medical students and devotees of Rasool attended it.

٭   Majlis Maktaba-tul-Madinah set up its stall in the book fair arranged by the Lahore University of Management Sciences.

٭   Under the supervision of Majlis for Fishermen, a Madani Halqah was held in a Masjid in the Baba Bhit Island, Keamari, Karachi. A preacher of Dawat-e-Islami delivered a Sunnah-inspiring speech.

٭   The Nigran of the I’tikaf Majlis Pakistan visited different Jami’aat-ul-Madinah of Karachi, motivating respectable students to attend and to make others attend I’tikaf in Ramadan.

٭   Ijtima’aat of Du’a for recovery from diseases were also held in five different places in Nepal. Thousands of Islamic brothers attended these Ijtima’aat.

٭   In Janakpur, Nepal, the construction work of a Madani Markaz Faizan-e-Madinah was started.

٭   In Kathmandu, a place was designated for Salah and was named “Faizan Siddeeq-e-Akbar”. Salahs were also started there.

A 3-day Sunnah-inspiring Ijtima’ was held in Bangladesh. Islamic scholars, saints, politicians, social workers and a huge number of devotees of Rasool attended this Ijtima’. Afterwards, many Islamic brothers also had the privilege of travelling with Madani Qafilahs.

A 10-day international book fair was held in Muscat during the month of February, 2019. Maktaba-tul-Madinah Al-‘Arabiyyah also set up its stall where books in different languages were made available. Mufti Shams-ul-Huda Misbahi from India, Mufti Muhammad Jan Naeemi from Pakistan, VIPs, journalists and a large number of Islamic brothers visited the stall of Maktaba-tul-Madinah.

A branch of Maktaba-tul-Madinah was recently inaugurated in Nepalgunj – a city in Nepal.

For the purpose of attending the Madani Muzakarahs held in Rajab-ul-Murajjab, devotees of Khuwajah Ghareeb Nawaz from Arabia, South Africa, Italy, UK and Arab Emirates came to Faizan-e-Madinah – the global Madani Markaz of Dawat-e-Islami. Travellers of 12 months Madani Qafilahs from Sri Lanka and UK also came. Not only did they attend the Madani Muzakarahs but also took part in other Madani activities.

٭   During February, 2019, responsible Islamic brothers and members of Dawat-e-Islami’s Majlis for Islamic scholars met with more than 1800 Islamic personalities including Islamic scholars, saints and Imams of Masajid. 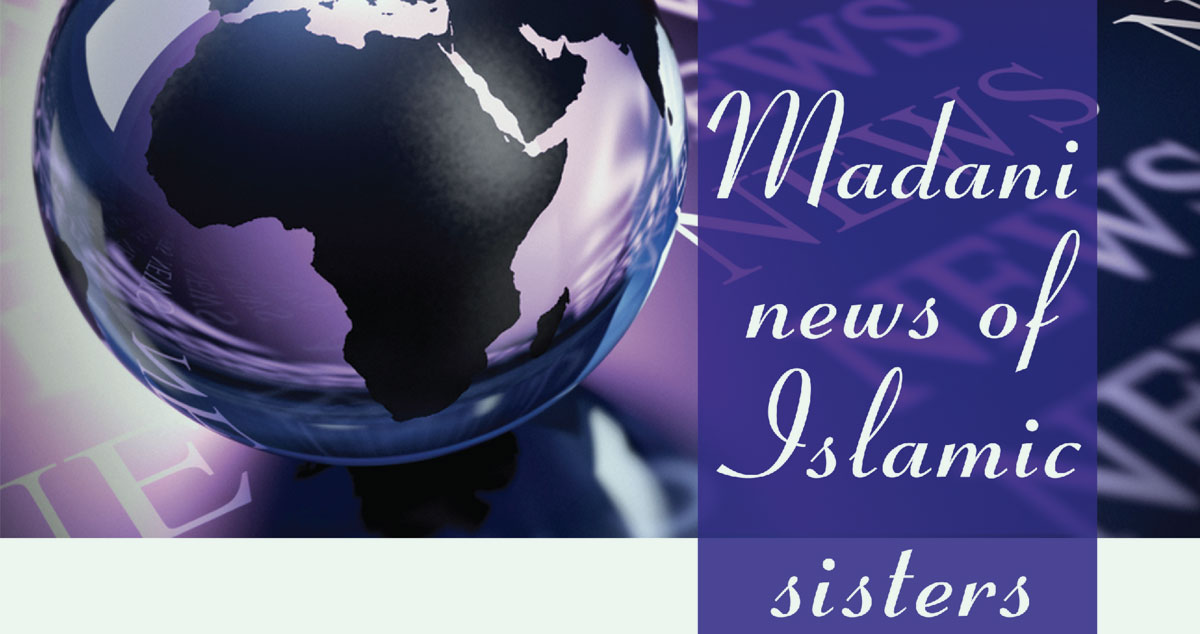 On 1st Rajab 1440 AH corresponding to 9th March 2019, a Madani Mashwarah of Islamic sisters of ‘Global Majlis Mushawarat’ was held in global Madani Markaz, Faizan-e-Madinah, Bab-ul-Madinah, Karachi, in which, performance of different Madani activities were examined. Targets were set for further increasing the Madani activities of Dawat-e-Islami.

Under the supervision of Majlis Jami’a-tul-Madinah (lil-Banaat) [for Islamic sisters], on 16th February 2019, Sunnah-inspiring Ijtima’aat were held at 32 places across Pakistan. Approximately 1452 female students and honourable female teachers attended these Ijtima’aat.

٭In January 2019, a ‘Tarbiyyati Course’ was held in Mahrvi Zone, Rawalpindi, and by the blessing of it, 4 new stalls of Ta’wizaat ‘Attariyyah (Islamic amulets) were set up.

٭Over 78000 Ta’wizaat (Islamic amulets) were given to approximately 46000 patients and grief-stricken people.

٭In Lodhran (Punjab), a responsible Islamic sister made a Madani visit to a college and met the honourable female principal of the college. She was invited to attend Tajweed class going to be held in summer camp and she was presented with the monthly magazine ‘Faizan-e-Madinah’ as a gift.

٭3-day ‘Faizan-e-Namaz Courses’ were held in Veraval and Mandvi (India).