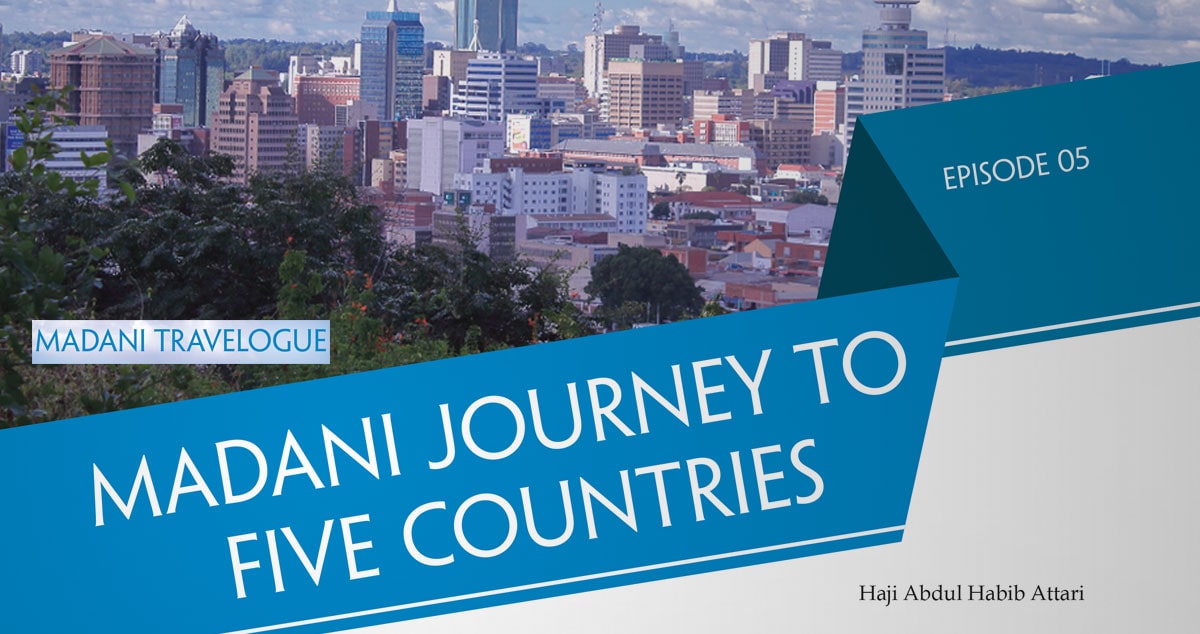 On 22nd March 2019, after ‘Isha Salah, on the occasion of the ‘Urs of Sayyiduna Imam Ja’far Sadiq رَحْمَةُ اللّٰەِ عَلَيْه Madani Muzakarah was held and meal was served for Isal-e-Sawab in global Madani Markaz Faizan-e-Madinah.

Afterwards, we reached Karachi Airport at around 1.00 am for the Madani journey to Zimbabwe, Tanzania, Kenya, Uganda and UAE. At the airport, we met the airport staff and some passengers.

A 3-day Ijtima’ of responsible Islamic brothers of Dawat-e-Islami was going on in Slough, a city of UK. Responsible Islamic brothers asked me to present Madani pearls, so I humbly said: اِنْ شَـآءَ اللّٰە, I will be free at around 1.50 am from immigration and then I will join you online from the Karachi Airport. After the immigration process, I presented Madani pearls about the Madani activities of Dawat-e-Islami for a little while to the attendees of Ijtima’.

Boarding started almost after 30 minutes. After sitting in the plane, I accepted the responsibility of becoming Ameer-e-Qafilah at the request of my travelling companions i.e., Ashfaq Attari Madani and Ahmad Raza Attari. On this occasion, we made some good intentions and also recited the Du’a of journey in the plane.

Our plane arrived at Dubai Airport at 4.00 am. From Dubai we departed for Zimbabwe at 9.00 am after offering Fajr Salah and taking rest for some time. On the way, our plane also stopped at Lusaka, a city of Zambia, where we offered Zuhr Salah and then we reached Zimbabwe Airport at around half past four.

First time in my life, I went to Zimbabwe. Dawat-e-Islami has just started its Madani activities there. Despite this, many Islamic brothers were present to welcome us at the airport.

From the airport, we reached the house of an Islamic brother where after Maghrib Salah I was privileged to deliver a speech in a Sunnah-inspiring Ijtima’. A large number of Islamic brothers attended it. In Zimbabwe, people usually sleep early, therefore Ijtima’aat are usually held between Maghrib and ‘Isha. Here, by mentioning the importance of the Holy Quran and the Quranic parable of Sayyiduna Yusuf عَلَيْهِ السَّلَام I motivated them to recite and understand the Holy Quran. Many Islamic brothers intended to recite and understand the Holy Quran and got information about Madrasa-tul-Madinah Online. After Sunnah-inspiring Ijtima’, Madani Mashwarah and meeting continued till late night.

On the second day before Zuhr, I met different Islamic brothers at their homes and after Zuhr, I delivered a speech in the Madani Halqah of traders about the topic of Tawakkul [absolute trust in Allah Almighty]. Afterwards, I continued to meet different Islamic brothers and make individual efforts on them. After Maghrib Salah, I was privileged to deliver a speech at another place. This time, I was privileged to speak about some of the Ayahs of the Holy Quran in which Muslims were addressed like this ‘یٰۤاَیُّهَا الَّذِیْنَ اٰمَنُوْا’.

Companions of journey were not issued visa

Departure for Tanzania from Zimbabwe

I departed for Dar es Salaam, a city of Tanzania, from Harare, the city of Zimbabwe, at around 1:45 am. During this journey, our plane stopped approximately for two hours at Nairobi, a city of Kenya, and I offered Fajr Salah there. The plane departed from Nairobi at around quarter to seven and reached Dar es Salaam Airport at around half past eight. Many Islamic brothers were also present there at the airport.

As I reached Dar es Salaam, I got very tired, therefore I went to the home of an Islamic brother and took rest. After 4.00 pm, I started meeting Islamic brothers. I went to the house of Rafeeq Baghdadi and did Fatihah Khuwani. Rafeeq Baghdadi was a senior preacher of Dawat-e-Islami who was one of the initiators of Madani activities in Tanzania. He passed away few days ago.

After Maghrib Salah I was privileged to deliver a speech about the topic of ‘Islamic knowledge’ to Islamic brothers in Madani Markaz Faizan-e-Madinah. This speech was being translated in Swahili, a local language, by a preacher of Dawat-e-Islami. During the speech, Islamic brothers were also given this good news that Jami’a-tul-Madinah was going to be started very soon in Dar es Salaam, Tanzania.

After offering ‘Isha Salah in Faizan-e-Madinah, I was privileged to deliver a speech in a Madani Halqah. In that Halqah, the Islamic brothers of Modasa [Gujarat, India] were present. After the speech, I met Islamic brothers and then I got the opportunity to take rest at around 2.00 am.

Near the city of Dar es Salaam, a devotee of Rasool has given Dawat-e-Islami six acre land where a great and glorious Madani Markaz Faizan-e-Madinah and a Jami’a-tul-Madinah will be constructed. After offering Fajr Salah I along with Islamic brothers visited the place and made a Du’a there. Near the place were fields where there was a home of an Islamic brother who took us to his home and served us a home-made breakfast that also included different fruits and coconut.

After returning to my lodging, I got ready for the next journey. I reached Mombasa, a city of Kenya, by air at around 1.00 pm. Ashfaq Attari Madani and Ahmad Raza Attari, who had stopped in Zimbabwe because they were not granted the visa, also reached there.

Islamic brothers gave us a warm welcome at Mombasa Airport. When we reached Madani Markaz Faizan-e-Madinah from the airport, the students of Jami’a-tul-Madinah also showed affection for us over there. A large number of Islamic brothers were present there. I met them for some time and also invited them to attend the weekly Sunnah-inspiring Ijtima’ going to be held at night.