Preparation for making Khichra was especially being made at home today.

Little Madiha asked her mother: Dear mother! Why are you cooking Khichra today?

Mother: Today is 10th Muharram-ul-Haraam. On this day, Sayyiduna Imam Husain رَضِىَ اللّٰەُ عَنْهُ, the maternal grandson of our Beloved Rasool صَلَّى اللّٰەُ عَلَيْهِ وَاٰلِهٖ وَسَلَّم and many of his companions رَضِىَ اللّٰەُ عَنْهُم were martyred. For conveying Sawab to them we are also having Niyaz at our home.

Madiha: Dear mother! What are Niyaz and Isal-e-Sawab?

Mother: Yes! Sayyiduna Sa’d Bin ‘Ubadah رَضِىَ اللّٰەُ عَنْهُ, a blessed companion, humbly asked: Ya Rasoolallah صَلَّى اللّٰەُ عَلَيْهِ وَاٰلِهٖ وَسَلَّم! My mother has passed away. (I would like to give some Sadaqah for conveying Sawab) Which Sadaqah will be better? The Beloved Rasool صَلَّى اللّٰەُ عَلَيْهِ وَاٰلِهٖ وَسَلَّم replied, ‘Water’. (As the water was short there and it was needed.) He رَضِىَ اللّٰەُ عَنْهُ got a well dug and said: It is for the mother of Sa’d (i.e. its Sawab be conveyed to my dear mother). (Abu Dawood, vol. 22, pp. 180, Hadees 1681)

From this blessed Hadees it has become obvious that it is a very good deed to convey Sawab to the dead. Similarly, a person asked a question from the Beloved Rasool صَلَّى اللّٰەُ عَلَيْهِ وَاٰلِهٖ وَسَلَّم: My mother has passed away. If I give Sadaqah on her behalf, will she get its benefit? Our Beloved Rasool صَلَّى اللّٰەُ عَلَيْهِ وَاٰلِهٖ وَسَلَّم replied: ‘Yes’. He said, ‘I have a garden; making you my witness I give it as a Sadaqah on behalf of my deceased mother [i.e. for conveying Sawab to her]. (Tirmizi, vol. 2, pp. 148, Hadees 669)

‘Dear mother! What benefit do we get by conveying Sawab to those who have passed away?’ asked Madiha.

Mother: You have asked me a very good question. The biggest benefit is that we also get the Sawab equal to the total number of people of those to whom we convey Sawab. For example, when we perform a virtuous deed, we get 10 virtues, but when we convey its Sawab to ten dead people, everyone will get ten virtues each, whereas we will get one hundred and ten virtues and if we convey its Sawab to one thousand people, we will get ten thousand and ten virtues. (Derived from: Bahar-e-Shari’at, vol. 1, pp. 850)

Dear mother! On Madani Channel, on the occasion of conveying Sawab to pious people processions are also taken out and Madani slogans are also chanted. Why is it so? Madiha asked a question.

Mother: Actually taking out a procession and chanting Madani slogans are a way of expressing love for these pious people. It also focuses attention on the fact that today Sawab is being conveyed to a pious person. Children usually like processions and slogans.

Madiha immediately said: Yes, dear mother! I like the processions very much shown on Madani Channel and I have also memorized many slogans. Dear mother, shall I tell you the slogans?

Every companion of Prophet 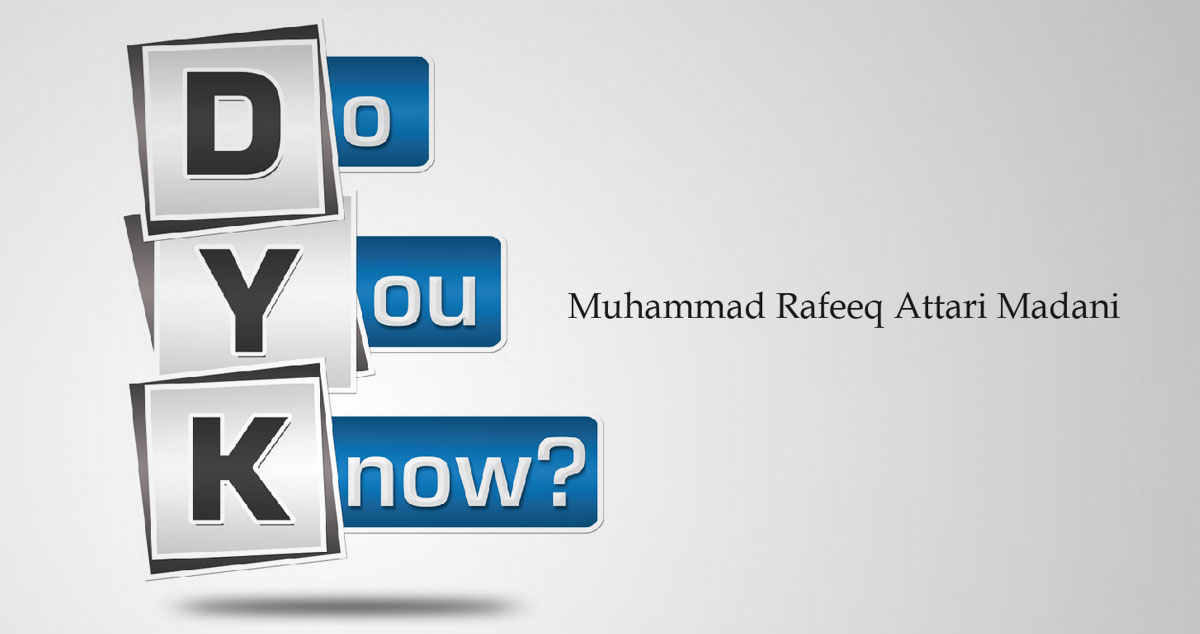 Question 1: Who was the first martyr amongst the companions of Imam Husain رَضِىَ اللّٰەُ عَنْهُ on the plains of Karbala?

Question 2: Who was the fortunate person that left the Yazeedi troops and joined the Husaini troops?

Question 3: Who was the first son of Sayyiduna Imam Husain رَضِىَ اللّٰەُ عَنْهُ who embraced martyrdom on the plains of Karbala?

Question 4: What is the excellence of applying ‘Ismid’ kohl on 10th Muharram?