What Will Happen After It 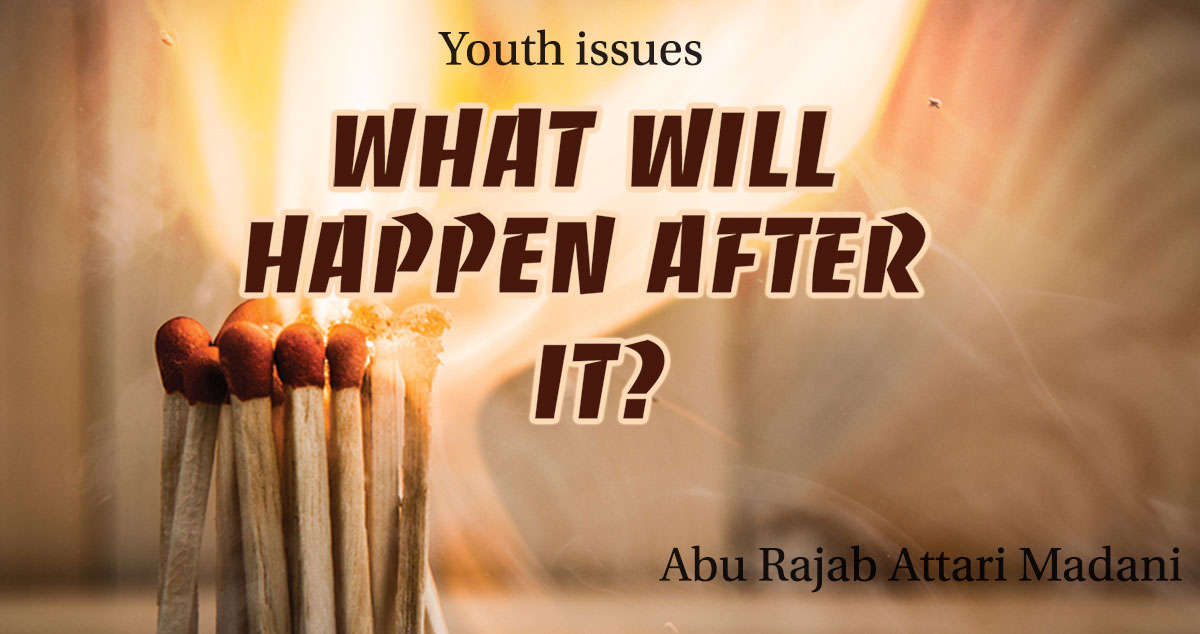 Kashif again had a fight today with the boys of his area. They not only verbally abused him but also repeatedly hit him very hard. They were three in number whereas he was alone, so he could not stand against them but he was extremely angry. He immediately intended to take revenge and quickly reached his house. He took out his father’s pistol from the cupboard, checked the bullets and was going to leave the house but all of a sudden he stopped. The voice of his class fellow, Farooq Raza Attari started echoing in his head: Whenever you wish to commit a bad deed, do ponder over, “what will happen after it?” Kashif received this Madani pearl when both of them were coming out of the college. He then started visualising its consequence and imagined: As soon as he reached their street, he did not give a chance to understand and react to the situation to the boys who were laughing and celebrating their victory, and fired all the bullets on them and killed them. People gathered there in the blink of an eye. They called the police who arrested him and took him to the police station. He then saw the distressed face of his father who had tears in his eyes and questions to ask. How could Kashif answer his father’s questions as he was not even able to meet his father’s eyes because of embarrassment? His case was brought to the court. His father hired famous lawyers, paying them a high fee but proofs and witnesses were strong; therefore, he was sentenced to lifetime imprisonment. When his mother and younger brother came to the jail to meet him, their distressed faces grieved him. His brother had a wish in his eyes, ‘My brother! If only you had not committed this act. People taunt me that my brother is a murderer. The boys of our area don’t like talking to me.’ His mother told him that his sister’s [future] in-laws have broken off her engagement. He started weeping copiously after they left, thinking that if only he had controlled his emotions, so he would not be in this situation now. Suddenly, something fell on the ground and made a noise, and Kashif realised that he had just been visualising all this. He saw that the pistol had fallen from his hands. He was sweating buckets. He had seen, “what will happen after it”. His anger had completely cooled down. Now he could not even imagine murdering someone. Kashif started making Du’a in his heart for his class fellow, Farooq Attari.

Dear young Islamic brothers! We should also learn from this fictional parable that we should stop a little whenever we are going to perform any deed and ponder over its consequences. A person humbly said to the Beloved Rasool صَلَّی اللہُ تَعَالٰی عَلَیْہِ وَاٰلِہٖ وَسَلَّمَ, ‘Please give me advice.’ So the Beloved Rasool صَلَّی اللہُ تَعَالٰی عَلَیْہِ وَاٰلِہٖ وَسَلَّمَ said, ‘Start a deed after contemplating. Then, if you see goodness in its consequence, do it; and if you fear [that you might fall into] misguidance, refrain from it. (Sharh-us-Sunnah lil-Baghawi, vol. 6, pp. 545, Hadees 4943) I.e. First think about the consequence of what you are going to do and then start it. If, in relation to the religion or Dunya [world], you see anything bad in the consequence of a deed, do not start it in the first place, and if you have started it, stop it and do not complete it. (Mirat-ul-Manajih, vol. 6, pp. 626)

May we ponder over the consequences of every act before doing it, so we can save ourselves from many disadvantages, for example:

٭ Before riding a bike or driving a car, bus, truck etc., at high speed, ponder over the fact that reaching late is better than not reaching [a place]. If you suffer an accident because of crossing the speed limit, it can cost you your life. If you survive, even then, you may have to spend the rest of your life on crutches or wheelchair in case your hands and feet are no longer usable.

٭ Arguing with customers, disrespecting them and causing them to exit the shop makes us happy by considering it our victory but when we lose customers because of our such acts, we start being anxious. At times, it becomes difficult even to conduct the business.

٭ In the office, arguing and quarrelling with colleagues, and sticking the nose into their matters make them anxious and as a result, they also don’t miss a chance to make you anxious. When a person loses peace, his performance becomes weak. In this way, a person eventually loses his job.

٭ Those who submit resignation on facing small issues cannot work anywhere for a long time and hence, a time comes when no one is ready to give them a job.

٭ People give Talaaq [divorce] after getting angry on small issues but when their anger cools down, they come to their senses; however, it’s too late. In such cases, they are left with nothing but regret.

٭ When young people who waste their time in useless activities instead of studying fail the exams, they become distressed and some even commit suicide because of depression.

٭ Performing one-wheeling is a beloved activity of many young people. Some parents do not even know about their children’s interest. If such people are made to understand, they reply in the following way: ‘Nothing happens. There is no price for one’s interests’. However, when they suffer an accident while performing one-wheeling and injure their hands and legs, or even depart this life, how badly they hurt the feelings of their parents, brothers, and sisters! If you visualise it, you will not even imagine performing one-wheeling, let alone practically performing it. As an example, following are two terrible and unpleasant incidents of one-wheeling:

(1) On the occasion of Eid-ul-Fitr, a young man died in Lahore while performing one-wheeling and 8 got injured. (Nawa-i-Waqt Online, 23 August, 2012; amended)

(2) While performing one-wheeling on the second day of Eid, young men hit a family going on a motorbike in Dar-us-Salam (Toba Tek Singh, Punjab). In the accident, 10 people got injured including two women, from whom two young men lost their legs.

٭ The people interested in watching indecent images and videos on mobile, laptop, etc. through internet are so fond of this evil act that neither they care about their studies nor business. People who watch such type of images and videos secretly get startled at seeing the curtain or door being opened and become afraid, lest any family member see them committing such evil act. If only they felt that “Allah عَزَّوَجَلَّ is watching”, so they would not even go near to such acts.

May Allah عَزَّوَجَلَّ save us from evil acts and their evil consequences, and may He عَزَّوَجَلَّ bless us with Taufeeq to carry out good deeds.

A point comes in the lives of young people when they must enter workforce and begin their working life.

Dear young Islamic brothers! We get opportunities to take countless decisions in our [every aspect of] life.
Read Article

Once there were two young friends, Asif and Ali.
Read Article

Many years ago, a young man used to do shoes business in Gojra (Punjab). During discussion, he placed a bet of 40 PKR with his friends on eating tartaric acid followed by drinking soda water (carbonated water);
Read Article

How The Time Gets Wasted
Read Article

Human life is a blend of happiness and sadness. Sometimes, man is greatly pleased and at times he feels immensely grieved.
Read Article

Upon seeing that his shoes were not polished properly, the husband got angry and said to his wife, ‘You can’t even do this properly! After all,
Read Article