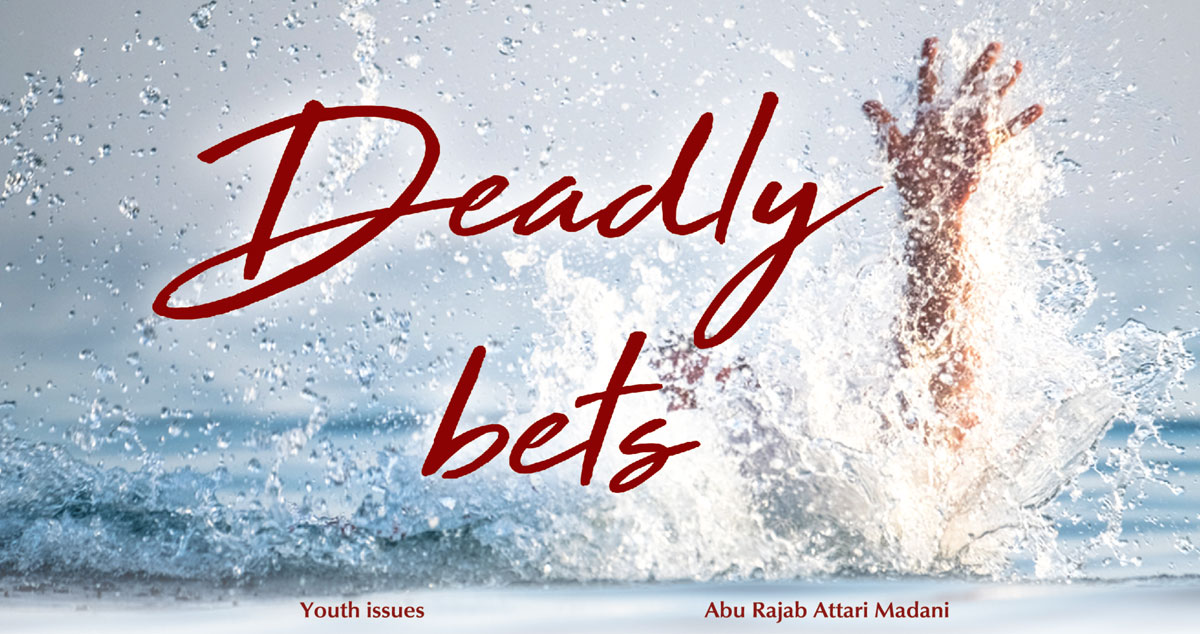 Many years ago, a young man used to do shoes business in Gojra (Punjab). During discussion, he placed a bet of 40 PKR with his friends on eating tartaric acid followed by drinking soda water (carbonated water); so, as soon as he ate tartaric [leaven] powder followed by drinking soda water, he fell to the ground all of a sudden, writhed in awful and agonising pain and died on the spot.

In the same city, another young man bet 40 or 50 PKR on eating salt followed by drinking soda water; he also won the bet but it caused an acute liver failure and he also lost his life.

Dear Islamic brothers! These deadly bets are still in practice. By impermissible and Haraam bets made on playing ‘Carrom Boards’, ‘Ludo’, ‘billiards’, ‘cards’ etc., people lose their wealth and they even lose their lives after involving in deadly bets such as:

٭Betting on crossing a deep and fast-flowing river.

٭Betting on approaching and touching the wild animals for example lion, leopard, bear and crocodile.

٭Betting on spending the night alone in the haunted place.

٭Betting on standing on the edge of towering buildings without any support.

٭Betting on standing on the dangerous mountain peaks in the risky way.

٭Betting on downhill running from a rocky slope.

٭Betting on holding a poisonous snake.

٭Betting on getting off from a moving vehicle.

٭Betting on jumping off high waterfalls.

٭Betting on sitting in icy water during freezing cold without warm clothes.

٭Betting on standing longer in front of a fast moving train.

٭Betting on motorbike race at crowded places without using brakes.

People should avoid such kind of fatal bets. Read 6 news stories about such deadly bets with the intention to gain admonition:

1. Betting on crossing deep and fast-flowing river and losing life

Five students of Government College Jhelum (Punjab, Pakistan) placed a bet as who can cross the upper Jhelum River first by swimming. Upon this, a student jumped into the river but the rest of them did not do so. Upon seeing him drowning, all four students fled the place. (Geo News website, 28 September 2018)

2. Deadly betting on sitting in front of a moving train

Having watched a dangerous video on social media, a 19-year-old student of Government Science College, Faisalabad placed a bet with his friends as to who can sit longer on a railway track in front of a coming train. So, all friends sat on the railway track. One by one, everybody moved away to save their lives when the train arrived but he remained engaged in his mobile phone. His friends tried their best to get him up but in vain and the train ran over the boy, crushing him badly; thus this young man lost his life due to the fatal betting. (92 News website, 21 November 2018)

In Nigeria (Edo State), a 25-year-old man placed a bet with his two friends on consuming hot drink (tea or coffee). He won first two rounds but was no longer alive for obtaining his prize of 20$. (Urdu Point website, 21 March 2015)

A young man belonging to Gujranwala (Punjab), who had come at Kunair picnic point, placed a bet on crossing Jhelum River and drowned. According to the detail, upon the offer of 15000 rupees and a smartphone against winning the bet placed on crossing Jhelum River, a 19-year-old young man jumped into the river and disappeared into the water after a while and the waves swept him away. (Dawn News website, 21 August 2017)

In Sydney (Australia), a young student placed a bet on eating a slug (a kind of snail but with no shell) and ate it. After eating it, he started feeling weak. Parents took this condition for granted, not considering it serious. However, he fell into a coma (state of such unconsciousness in which patient seems to be dead) within 24 hours. He died after remaining in this condition for a year. (Express News website, 6 November 2018)

In Okara (Punjab), a couple went on a picnic on Eid day; husband placed a bet with his wife on jumping into the river and crossing it by swimming. Wife started making a video for social media. Husband jumped in the river, swam cross some distance and then he disappeared. Later on, his dead body was found. (24 News website, 19 June 2018)

It is not permissible to put one’s life on risk

Remember! Without any Shar’i reason, putting one’s life on risk is a sinful and Haraam act and act leading to Hell. It is stated in the Glorious Quran:

Translation from Kanz-ul-Iman: And do not fall into destruction with your own hands.

Have company of good people

Company is also amongst those things which affect one’s character. If one joins the company of businessmen, he will start thinking more about business; if one joins the company of the players, he will become fond of playing games; if one joins the company of the worshippers and ascetic people, he will also become pious. The Beloved Rasool صَلَّی اللہُ تَعَالٰی عَلَیْہِ وَاٰلِہٖ وَسَلَّمَ has illustrated the influence of the company in this way: ‘An example of a good and bad companion is like that of a perfume-carrier and a blacksmith. The perfume-carrier will either give you a gift or you will buy something from him or you will catch a pleasant fragrance from him. On the other hand, a blacksmith will either burn your clothes or you will catch an unpleasant odour from him’. (Sahih Muslim, pp. 1084, Hadees 6692)

Dear Islamic brothers! We should think about the end result of every piece of work before starting it. We should not involve ourselves in risky activities due to overconfidence. May Allah Almighty grant us Taufeeq (ability) to become a righteous and pious person. May we have the Madani thinking of competing one another in carrying out good deeds.

A point comes in the lives of young people when they must enter workforce and begin their working life.

Dear young Islamic brothers! We get opportunities to take countless decisions in our [every aspect of] life.
Read Article

Once there were two young friends, Asif and Ali.
Read Article

Many years ago, a young man used to do shoes business in Gojra (Punjab). During discussion, he placed a bet of 40 PKR with his friends on eating tartaric acid followed by drinking soda water (carbonated water);
Read Article

How The Time Gets Wasted
Read Article

Human life is a blend of happiness and sadness. Sometimes, man is greatly pleased and at times he feels immensely grieved.
Read Article

Upon seeing that his shoes were not polished properly, the husband got angry and said to his wife, ‘You can’t even do this properly! After all,
Read Article