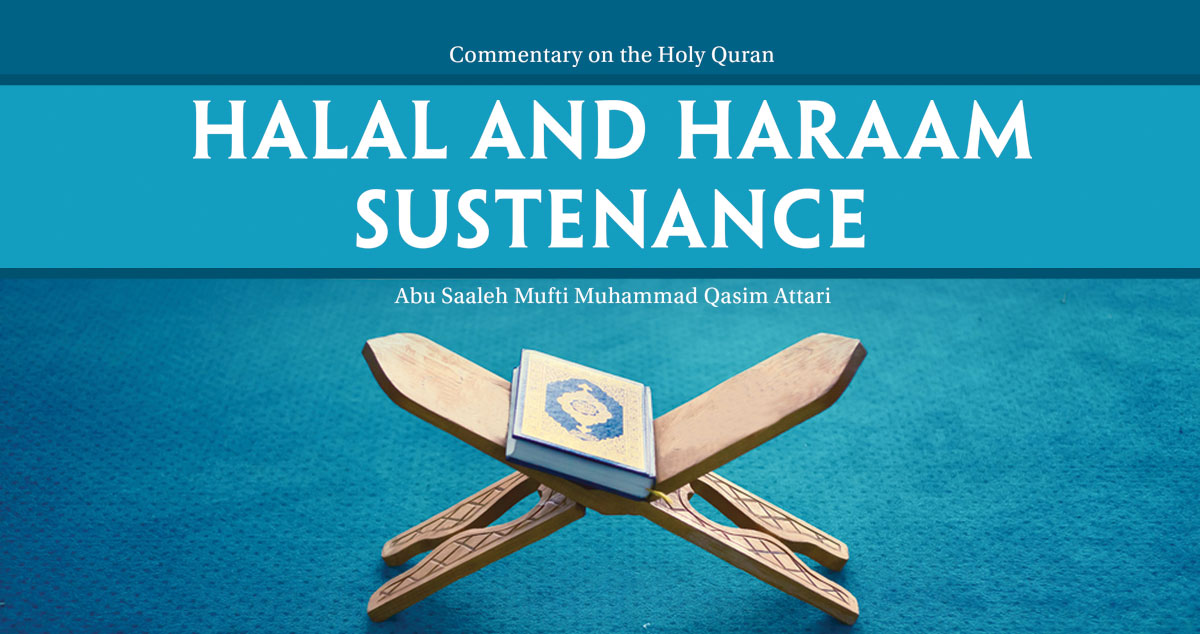 O Messengers, eat pure things, and perform good deeds; I am aware of your actions.

All Rusul were pure and were commanded to eat Halal sustenance and to perform virtuous deeds. This commandment was given to every Rasool. One of its reasons was to highlight the dignity and importance of Halal sustenance and virtuous deeds. There is another good reason for this. Every Nabi عَلَيْهِ السَّلَام is a role model for his Ummah. When the Ummah observes his Nabi عَلَيْهِ السَّلَام attaching great importance to Halal sustenance and showing strong inclination towards virtuous deeds, they will also follow him, performing the same deeds. For instance, when the parables of good manners of the Holy Nabi صَلَّى اللہُ تَعَالٰى عَلَيْهِ وَاٰلِهٖ وَسَلَّم, the acts of worship performed by him and the hardships faced by him are mentioned, these parables prove to be great motivation for people. The same commandment of eating Halal sustenance was given to Muslims as well. Therefore, regarding the same above-mentioned Ayah, the Greatest and Noblest Nabi صَلَّى اللہُ تَعَالٰى عَلَيْهِ وَاٰلِهٖ وَسَلَّم said, ‘Allah عَزَّوَجَلَّ is Pure and does not accept anything except for the pure thing. And Allah has given Muslims the same commandment as was given to Rusul. (That commandment is): ‘O Messengers, eat pure things, and perform good deeds; I am aware of your actions.’ (Part 18, Surah Al-Mu`minoon, Ayah 51) And Allah عَزَّوَجَلَّ said (to believers): ‘O believers! Eat the good things that We have provided.’ (Part 2, Surah Al-Baqarah, Ayah 172) (Sahih Muslim, pp. 393, Hadees 2346) The Arabic word ‘طَیِّبَات’ i.e. pure things refer to Halal things and the word ‘صَالِحًا’ i.e. good deeds mean acting upon the commandments of Shari’ah steadfastly.

As far as obedience to Almighty Allah is concerned, Halal sustenance is fundamentally important for it. The most significant factor in piety and Divine fear is to refrain from disobedience to Allah عَزَّوَجَلَّ. And earning Haraam sustenance is one of the most terrible and despicable acts of disobedience. Regrettably, people have become quite careless about Halal and Haraam earnings. The signs of an era mentioned in the following Hadees appear these days, ‘An era will come upon people in which man will not care about whatever he gets. [He will not care] whether it is from Halal or Haraam [means].’ (Sahih Bukhari, vol. 2, pp. 7, Hadees 2059)

There is great excellence in earning Halal sustenance. The one who eats Halal sustenance is a Heaven-dweller. The Nabi of Rahmah, the Intercessor of the Ummah صَلَّى اللہُ تَعَالٰى عَلَيْهِ وَاٰلِهٖ وَسَلَّم has said, ‘The person who eats pure, i.e. Halal thing and acts upon Sunnah and people are safe from his mischief, will enter Heaven.’ (Sunan-ut-Tirmizi, vol. 4, pp. 233, Hadees 2528)

Mentioned here are now the commandments of Quran regarding Halal and Haraam livelihood:

1. The Creator of the universe gave the commandment of eating Halal sustenance like this: ‘O believers! Eat the good things that We have provided, and acknowledge the favour of Allah if you (really) worship only Him’. (Part 2, Surah Al-Baqarah, Ayah 172)

2. Those making money by making people face wrongful arrests and convictions as well as those getting wealth in any Shar’iah-contradicting way were forbidden in this way: ‘And do not unfairly consume the wealth of each other, nor take their cases to rulers, in order that you may wrongfully consume a part of other people’s wealth knowingly’. (Part 2, Surah Al-Baqarah, Ayah 188)

3. Giving stark warning to those unlawfully getting the wealth of the orphans, Allah عَزَّوَجَلَّ said: ‘Those who consume the wealth of orphans unjustly, they are only filling their bellies with fire, and soon they will go into a blazing section of the Fire’. (Part 4, Surah An-Nisa, Ayah 10)

Also take a serious look at these Ahadees regarding Haraam sustenance:

6. It was mentioned in another Hadees, ‘The Beloved and Blessed Rasool صَلَّى اللہُ تَعَالٰى عَلَيْهِ وَاٰلِهٖ وَسَلَّم has cursed the person who gives and takes a bribe.’ (Abu Dawood, vol. 3, pp. 420, Hadees 3580)

7. The act of worship and the Salah performed by a Haraam-sustenance eating person are not accepted. (Ithaf-us-Sada-til-Muttaqeen, vol. 6, pp. 452)

8. Blessing is removed from the business of the person who tells lies and hides faults when doing trade. (Sahih Bukhari, vol. 2, pp. 14, Hadees 2082)

On the Day of Judgement, the Holy Nabi صَلَّى اللہُ تَعَالٰى عَلَيْهِ وَاٰلِهٖ وَسَلَّم will be standing against the oppressor in favour of the labourer deprived of his wage. (Sahih Bukhari, vol. 2, pp. 52, Hadees 2227)

It is Haraam to take the wealth of others by unlawful and impermissible means. All ways of Haraam earnings are included in it such as looting, robbing, stealing, gambling, interest [i.e. usury], bribery, weighing things dishonestly when selling them, getting wealth by deceiving others in any way, earning money by means of Haraam spectacles, earning money through films, dramas, songs, music, begging without Shar’i need, earning wage in return for Haraam actions or Haraam things. Similarly, if a witness makes money by giving false evidence or a judge gets wealth by passing a false judgment or a lawyer receives his fee by advocating falsehood or anyone misappropriates money, etc. from the wealth of any orphan, widow, poor or rich person, then these are all prohibited and Haraam acts leading to Hell.

May Allah عَزَّوَجَلَّ enable all Muslims to eat Halal sustenance and to refrain from Haraam sustenance! Aameen

The above-mentioned Ayah also says ‘وَاعْمَلُوْا صَالِحًا’ and perform the good deed. This commandment has been given to the Rusul of Allah, showing that acts of worship were Fard even for blessed Ambiya عَلَيْهِمُ الصَّلٰوةُ وَالسَّلَام. Therefore, no one can be released from the acts of worship no matter how great and high spiritual rank he has. This has also made a point clear. Under the guise of Sufis, saints and the ascetic, some people claim to have gained the closeness of the Almighty and say that no act of worship is Fard for them any longer. All this is wrong. Blessed Ambiya and Rusul عَلَيْهِمُ الصَّلٰوةُ وَالسَّلَام have very great ranks in the court of Allah عَزَّوَجَلَّ. Acts of worship remained Fard even for them, so how can anyone else claim to have been released from all acts of worship? May Allah عَزَّوَجَلَّ grant true sense of understanding and guidance to such people! Aameen