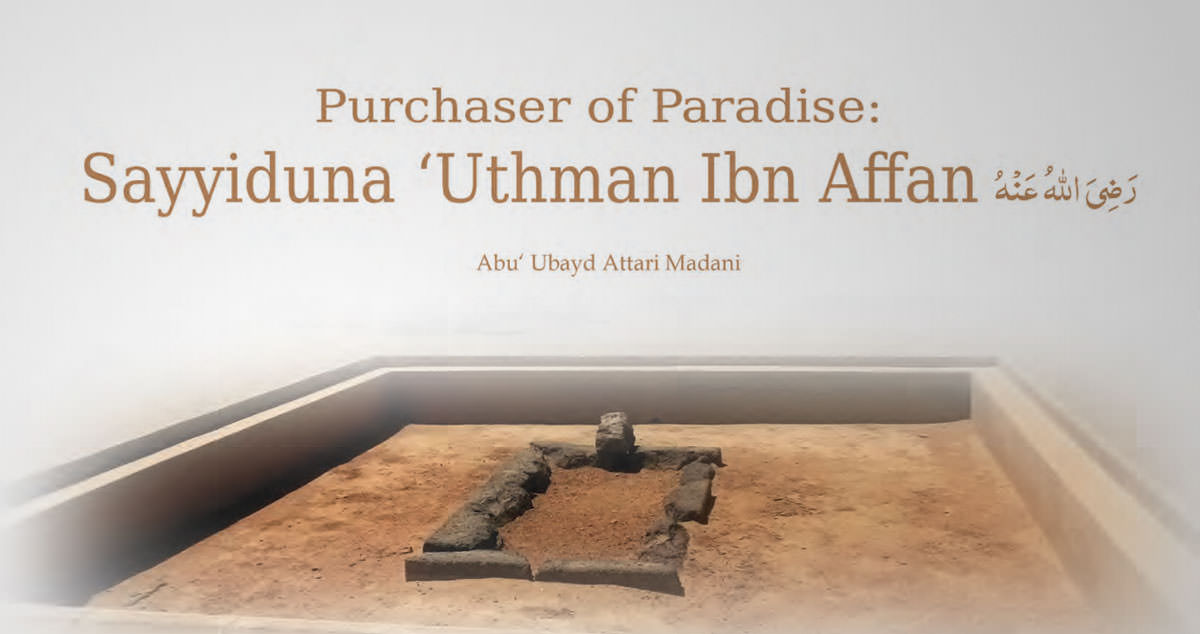 The branch of a Heavenly tree

Marriage to a Hūr (Heavenly maiden)

Once, during the caliphate of Sayyiduna Abū Bakr رَضِىَ اللہُ عَـنْهُ  a severe drought struck the people. Sayyiduna ‘Uthmān-e-Ghanī رَضِىَ اللہُ عَـنْهُ  arrived in Madīnah with a thousand camels that were laden with food and supplies. Sayyiduna ‘Uthmān رَضِىَ اللہُ عَـنْهُ  said to the traders of Madīnah: O assembly of traders! Bear witness that I have given all of these supplies away in charity to the needy people of Madīnah. Sayyiduna ‘Abdullāh Ibn‘Abbās رَضِىَ الـلّٰـهُ عَـنْهُما states: When I went to sleep at night, I saw the Beloved Prophet صَلَّی اللہُ تَعَالٰی عَلَیْہِ وَاٰلِہٖ وَسَلَّم  in my dream. The Noble Prophet صَلَّی اللہُ تَعَالٰی عَلَیْہِ وَاٰلِہٖ وَسَلَّم  was wearing a blessed shawl of light, in his blessed hands was an illuminated stick and the blessed laces of his sacred sandals were also shining. He صَلَّی اللہُ تَعَالٰی عَلَیْہِ وَاٰلِہٖ وَسَلَّم  said to me: I am in a hurry; ‘Uthmān has given 1000 camel-loads of flour and other supplies in charity. Allah Almighty has accepted this action of ‘Uthmān and married him to a Hūr (Heavenly maiden) of Paradise. (al-Riyād al-Nadirah, vol. 2, p. 43, summarised)

A man of Paradise

The Prophet of Mercy صَلَّی اللہُ تَعَالٰی عَلَیْہِ وَاٰلِہٖ وَسَلَّم  once said: I entered Paradise and an apple was placed in my hand, I was turning it around when it burst open and a Hūr (Heavenly maiden) came out from it whose eyebrows were like that of a vulture’s wings. I asked: Who do you belong to? She replied: I am for the one who will be killed unjustly: Sayyiduna ‘Uthmān Ibn ‘Affān. (Kanz al-‘Ummāl, vol. 7, p. 29, part 13, Hadīth 36257)

The Beloved Prophet صَلَّی اللہُ تَعَالٰی عَلَیْہِ وَاٰلِہٖ وَسَلَّم  said: I entered Paradise and I saw a palace made of gold, pearls and rubies. I asked: Who is this for? It was said: It is for the Caliph who will be killed unjustly after you: Sayyiduna ‘Uthmān Ibn ‘Affān رَضِىَ اللہُ عَـنْهُ . (Tā’rīkh Ibn ‘Asākir, vol. 39, p. 109)

The Confirmation of Heavenly Glad Tidings

Expansion of the Masjid and Paradise

Sayyiduna ‘Uthmān رَضِىَ اللہُ عَـنْهُ  said: Is there anyone from amongst you who has heard the Beloved Prophet صَلَّی اللہُ تَعَالٰی عَلَیْہِ وَاٰلِہٖ وَسَلَّم  saying: Whoever purchases this area (which was used for confining camels) and extends our Masjid, he shall be given Paradise and his reward in this world is that as long as the Masjid remains, his rank shall continue to rise. So, I purchased that area for twenty thousand Dirhams and endowed it for theMasjid.

Assisting the army and Paradise

He then said: Is there anyone who has heard the Beloved Prophet صَلَّی اللہُ تَعَالٰی عَلَیْہِ وَاٰلِہٖ وَسَلَّم  saying: The one who will provide this distressed army (an army without any supplies or necessities) with its necessary supplies shall have Paradise. So, I equipped that army with the necessary supplies and goods.

Paradise in exchange for a well

The words of Sayyiduna ‘Uthmān-e-Ghanī had no effect on the insensitive Khawārij. Eventually, after making false accusations against him, they martyred him whilst he was in the state of fasting on the day of Friday, 18th Zul-Hijjah 35 AH. His resting place is in Jannah al-Baqī’. (Ma’rifah al-Sahābah, vol. 1, pp. 264, 271; al-Isābah, vol. 4, p. 379) 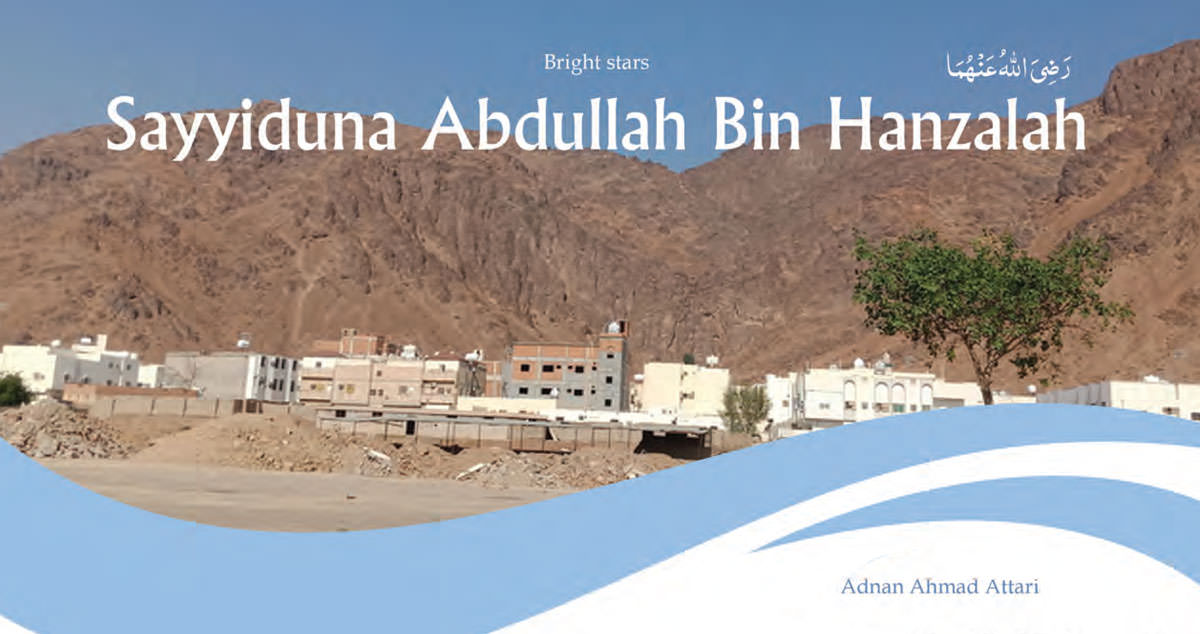 Dear Islamic brothers! The one who was clothed in those fine garments, the possessor of lofty and noble characteristics, the one given a high rank in the court of Sayyiduna ‘Umar رَضِىَ الـلّٰـهُ عَـنْهُ was the son of Sayyiduna Hanzalah (who was bathed by the angels), whose name was Sayyiduna ‘Abdullāh Ibn Hanzalah Ansārī رَضِىَ اللهُ عَـنْهُمَا. His noble father, Sayyiduna Hanzalah رَضِیَ اللہُ تَعَالٰی عَنْہُ  was granted the honour of martyrdom in Shawwāl 3 AH during the Battle of Uhud and the angels bathed him. (Tā’rīkh Ibn ‘Asākir, vol. 27, p. 422)

Along with being a great ‘Ālim, a righteous individual, a great personality, and a possessor of a high lineage, Sayyiduna ‘Abdullāh رَضِیَ اللہُ تَعَالٰی عَنْہُ  was a very simple person and a devoted worshipper. His servant states: Sayyiduna ‘Abdullāh رَضِیَ اللہُ تَعَالٰی عَنْہُ  did not have a bed on which he would sleep. When he would become tired after praying abundantly, he would lie down on the ground and use his armour and cloak as a pillow and sleep for a little while. (Usd al-Ghābah, vol. 3, p. 221)

Hearing this, he began to cry; he cried so much that the people thought that his soul was about to depart from his body. Then he stood up and someone said, ‘Remain seated.’ He replied, ‘The remembrance of Hell is preventing me from sitting, I do not know if I am amongst the dwellers of Hell.’ (Tā’rīkh Ibn ‘Asākir, vol. 27, p. 426)

Announcement of war against Yazīd

He had seven or eight sons. When he took them to Yazīd, Yazīd gave him one hundred thousand dirhams and gave his sons ten thousand dirhams each. Along with this, he gifted them with expensive clothing and fine riding animals. After taking all of this, he went to Madīnah, where the people asked, ‘How did you find Yazīd?’ He replied, ‘I have returned from such an individual that, by Allah Almighty, if only me and my sons remained, I would still wage war against him.’ The people then asked, ‘We have heard that Yazīd gifted you much wealth, riches and servants.’ He said, ‘The reason I took the wealth from him is so that I can use that wealth to wage a strong war against him.’ (al-BidāyahWa al-Nihāyah, vol. 5, p. 733.) He then began to motivate them to fight in the path of Allah: O my people! Fear Allah Almighty ! By Allah Almighty, the reason we are fighting in the path of Allah against Yazīd is because we fear that stones will rain down from the skies due to his misdeeds and the enormities that he commits; he marries off umm ul walad slave girls (i.e. those slave girls who have given birth to children from their owner), he drinks alcohol and misses Salāh. By Allah Almighty! If nobody supports me, I will still take up this struggle for the sake of Allah Almighty. Upon hearing this, the people began to pledge allegiance to him. (Tā’rīkh Ibn ‘Asākir, vol. 27, p. 429)

He did not raise his head

According to one narration (after returning), he began to spend his nights in the masjid, observe fasts continuously and would break the fast by drinking only Sattū[1]. He did not raise his head (out of modesty) towards the sky. (Tā’rīkh Ibn ‘Asākir, vol. 27, p. 429)

When the battle commenced, he رَضِیَ اللہُ تَعَالٰی عَنْہُ  was in such a state of calmness that his head would keep dropping due to nodding off, whilst the other people were fighting. The fighting had reached its peak when the time of Zuhr Salāh entered so he said to his servant: Protect me from the direction of my back so that I can pray Salāh. He then prayed the four units of Zuhr Salāh with utmost concentration.

He then engaged himself in the battle. Of his eight sons, one after another was being martyred. He also received many wounds and eventually, filled with the passion of being martyred, he removed his armour, threw it down and then broke the sheath of his sword (showing that he will not place it in its sheath again). With youthful vigour he continued to fight the enemy until he was blessed with the crown of martyrdom and left his mundane world. This battle is known as ‘Harrah’ and took place in 63 AH on the day of Wednesday when there were three days remaining for the completion of the month of Zū al-Hijjah. (Tā’rīkh Ibn ‘Asākir, vol. 27, pp. 430–432; Usd al-Ghābah, vol. 3, p. 221)

Show of oppression and cruelty

After this, the Yazīdī army spread such death and destruction, and spread such oppression and tyranny that we seek the refuge of Allah! The Yazīdī army plundered the city of Madīnah for three days and violated the sanctity of its pure women. Seven hundred Companions رَضِىَ الـلّٰـهُ عَـنْهُم, from both the Ansār and the Muhājirs, were martyred. In total, more than ten thousand citizens were martyred, out of which, seven hundred were also memorisers of the Quran. The Yazīdī army tied their horses to the pillars of Masjid Nabawī and for three days, the people were deprived of praying in Masjid Nabawī. (‘Umdah al-Qārī, vol. 12, p. 192, under Hadīth 4167; Sawānih Karbalā, p. 178, summarised)

Company until the Day of Judgement

Someone saw Sayyiduna ‘Abdullāh رَضِیَ اللہُ تَعَالٰی عَنْہُ  in a dream after this and he was in a good state. He asked, ‘Were you not martyred?’ He رَضِیَ اللہُ تَعَالٰی عَنْہُ  replied, ‘Of course! I have met my Lord; He has granted me entry into Paradise and I eat from the fruits of Paradise from wherever I desire.’ The one witnessing the dream then asked, ‘What became of your companions?’ He replied, ‘They are with me under my banner and they will remain by my side until the Day of Judgement.’ (Usd al-Ghābah, vol. 3, p. 221)

[1]A flour based drink