The excellence of Taqwa

In the blessed Ayah above, attaining Taqwa has been declared as the objective of fasting. Taqwa is a wonderful act of worship, it is the essence of all good deeds, and it consists of countless virtues. Taqwa is a sign of the friends of Allah (i.e. Awliya); Allah عَزَّوَجَلَّ says:

(Friends of Allah are) those who have believed and practice piety (by strictly following Shari’ah).

Indeed the most honourable amongst you, according to Allah, is one who is most pious amongst you.

And Allah is the Friend of those who fear.

Indeed Allah is pleased with the pious.

Taqwa is the best provision for the journey to the Hereafter; Allah عَزَّوَجَلَّ says,

That the best provision is piety

The best garment for man is Taqwa which - along with faith, righteous deeds, modesty and good manners - protects his spiritual and inner-self from Satan, beautifying his personality; Allah عَزَّوَجَلَّ says,

The garment of piety (faith and good character); that is the best

Allah Almighty grants pious people Noor [i.e. light] which differentiates between truth and falsehood. Moreover, the misdeeds of pious people are pardoned, and they are blessed with forgiveness; Allah عَزَّوَجَلَّ says,

O believers! If you will fear Allah, so He will bestow upon you that (criterion) with which you may separate the truth from falsehood, and He will remove your misdeeds and will forgive you; and Allah is The Extremely Bounteous.

And whoever fears Allah, Allah will create for him a way of salvation.  And (Allah) will provide him sustenance from where he could not imagine; and whoever relies upon Allah, so He is Sufficient for him

The meaning, concept, and types of Taqwa

Regarding the meaning, concept and types of Taqwa, Sadr-ul-Afadil, Allamah, Maulana Na’eemuddin Muradabadi رَحْمَةُ اللّٰهُ عَلَيْه has commented on the second Ayah of Surah Al-Baqarah in the following words: ‘There are various meanings of Taqwa, one of which is to ‘protect oneself from anything frightening’. In the terminology of Shari’ah, Taqwa means ‘abstinence from prohibitions and protection of Nafs from sin’. Sayyiduna Ibn Abbas رَضِیَ الـلّٰـهُ عَنْھُمَا said, ‘A pious person is he who refrains from Shirk (polytheism), major sins and indecencies.’ According to some Islamic scholars, Taqwa means abstaining from repeatedly committing sins and from being proud to obey Allah Almighty. Some have said that Taqwa means that you should not be found at the place where your Lord has forbidden you from being found. All of these meanings are compatible with one another, and in terms of their outcome, there is no difference among them. There are numerous levels of Taqwa: The Taqwa of common people is to refrain from Kufr (disbelief) by embracing Iman (faith), the Taqwa of people belonging to intermediate level is to abide by commands and to refrain from prohibitions, and the Taqwa of ascetic people is to abandon everything that distracts them from the court of Allah Almighty. A’la Hadrat, Imam Ahmad Raza Khan رَحْمَةُ اللّٰهُ عَلَيْه said, ‘Taqwa has seven types: (1) Refraining from Kufr, which, by the grace of Allah عَزَّوَجَلَّ, has been attained by every Muslim, (2) Refraining from heresy, which has been achieved by every Sunni, (3) refraining from every major sin, (4) also refraining from minor sins, (5) abstaining from ambiguous things, (6) refraining from sensual desires, (7) refraining from attention to anyone other than Allah عَزَّوَجَلَّ. The final rank belongs to the ascetic people; and the Noble Qur’an guides towards all seven levels.’ (Khaza’in-ul-Irfan with Kanz-ul-Iman, pp. 4; summarised)

Details of the seven types of Taqwa and their evidences

The First Type: Refraining from Kufr

The Holy Prophet صَلَّى اللّٰهُ عَلَيْهِ وَاٰلِهٖ وَسَلَّم said, ‘Whoever has these three characteristics will experience the sweetness of Iman (faith); (1) he should love Allah and His Prophet more than all other things, (2) whomever he has love for, he should have it only for the sake of Allah Almighty, (3) after being saved from Kufr (disbelief), he should dislike converting to Kufr as he dislikes being thrown into fire.’ (Muslim, pp. 47, Hadees 165; Bukhari, vol. 1, pp. 17, Hadees 16)

The Second Type: Refraining from heresy

The Holy Prophet صَلَّى اللّٰهُ عَلَيْهِ وَاٰلِهٖ وَسَلَّم said, ‘In the last era, there will be people who will be liars [like] Dajjal and will tell you such narrations which neither you nor your forefathers may have heard. So keep away from them, lest they misguide you; lest they make you indulge in mischief.’ (Muslim, pp. 17, Hadees 16)

If you keep avoiding the major sins that are forbidden to you, We will forgive your other (minor) sins and admit you into a place of honour.

The Fifth Type: Refraining from things about which there is a doubt as to whether they are permissible and Halal

The Holy Prophet صَلَّى اللّٰهُ عَلَيْهِ وَاٰلِهٖ وَسَلَّم said, ‘Halal is clear and Haraam is also quite clear. Between them are some ambiguous things, which many people are unaware of. So whoever refrains from ambiguous things has protected his religion and his honour, and whoever indulges in ambiguous things will end up indulging in Haraam. As a person grazes his animals close to a forbidden pasture, it is likely that his animals will end up entering the forbidden pasture.’ (Muslim, pp. 663, Hadees 4094; Bukhari, vol. 1, pp. 33, Hadees 52)

The Sixth Type: Refraining from the desires and wishes of Nafs

The Holy Prophet صَلَّى اللّٰهُ عَلَيْهِ وَاٰلِهٖ وَسَلَّم said, ‘Three things are included in [i.e. leads to] destruction; firstly, the greed that is obeyed, secondly, the desire of Nafs that is pursued, and thirdly, a person’s self-admiration. (Mu’jam-ul-Awsat, vol. 4, pp. 129, Hadees 5452)

And as for he who feared standing in the Majestic Court of his Lord and restricted his soul from (illicit) desire. So indeed Paradise only is (his) abode.

The Seventh Type: Refraining from attention to anyone other than Allah عَزَّوَجَلَّ

This type of Taqwa is the good fortune of the most ascetic people who attain closeness to the court of Allah Almighty. They dedicate their life and death to Allah عَزَّوَجَلَّ, ‘selling’ their life to their Gracious Lord. Deeply engrossed in Divine remembrance and love, they detach themselves from all others, becoming solely devoted to Him. Even if they look at others apparently, they do so observing and reflecting on spiritual  effulgence, or obeying Divine commandments. Allah عَزَّوَجَلَّ says,

Say you (O Beloved), ‘Undoubtedly my Salah, and my sacrifices, and my living and my passing away are all for Allah Who is Lord of all the worlds.’

And He عَزَّوَجَلَّ says further,

Remember the name of your Lord and separating from everyone else, devote yourself solely to Him.

May Allah عَزَّوَجَلَّ grant us these levels of Taqwa, and make our fasts and other acts of worship a means of attaining those ranks of Taqwa! Ameen 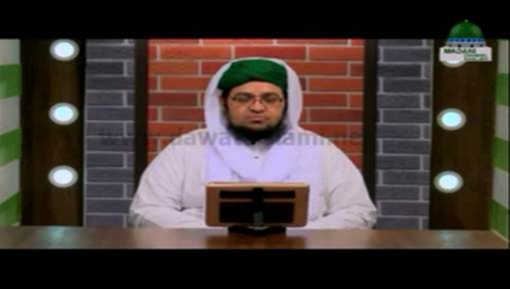 In The Light Of Hadith Ep 13 - Monotheism