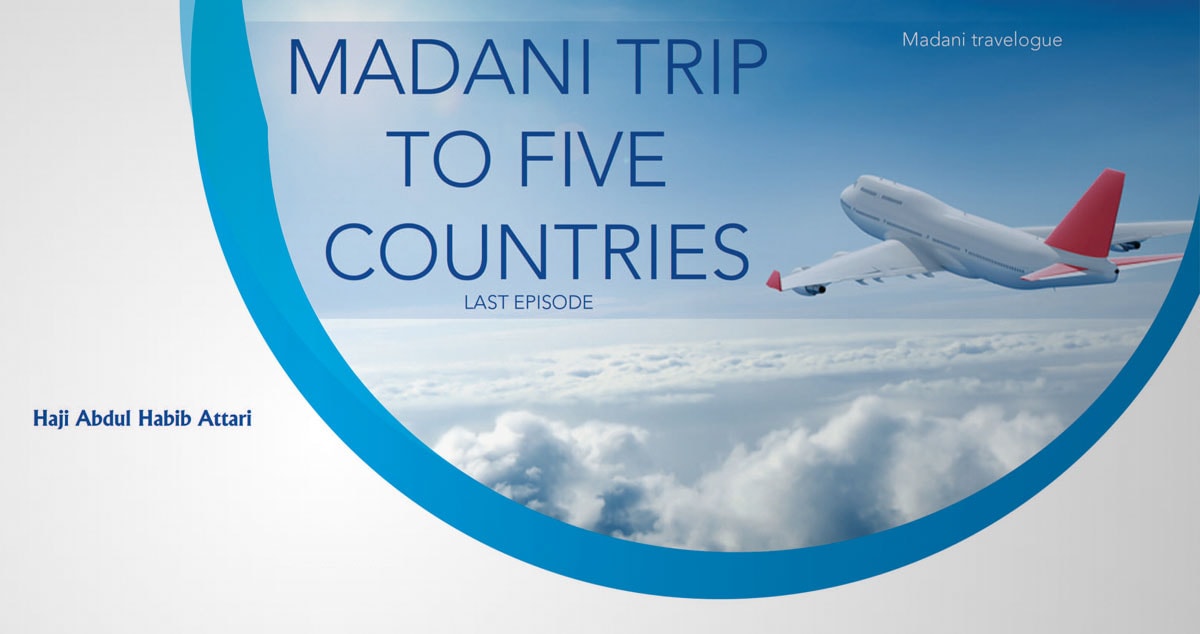 Departure for Uganda from Nairobi

We departed for Kampala, a city of Uganda, from Nairobi by the morning flight of 9:10 and first we reached Entebbe, the city of Uganda, in an hour and then reached Kampala after traveling one and a half hours by a vehicle.

Having reached Kampala, we offered Zuhr Salah and after Zuhr Salah, we took rest and then offered ‘Asr Salah. After ‘Asr Salah, I was privileged to deliver a speech in a Madani Halqah on the importance of the recitation of the Holy Quran to the Islamic brothers of India who were living in Kampala. اَلْحَمْدُلِلّٰە! Here a Niyaz of Kheer Puri, which was very delicious, was served for sending Sawab to Sayyiduna Imam Ja’far Sadiq رَحْمَةُ اللّٰەِ عَلَيْه.

After ‘Isha Salah, a great Sunnah-inspiring Ijtima’ was held in a big Masjid of Kampala named ‘Kololo Masjid’. Thousands of devotees of Rasool attended this Ijtima’. In this Ijtima’, approximately 90 percent were Bilali (dark-skinned) Islamic brothers. Here I delivered a speech on the topic of the Mi’raaj Journey of Beloved Rasool صَلَّى اللّٰەُ عَلَيْهِ وَاٰلِهٖ وَسَلَّم. Most of it was in English. After the speech, certificates were distributed to 19 students who had completed Nazirah Quran Kareem in Madrasa-tul-Madinah. After distributing certificates, I had a Madani meeting with the local responsible Islamic brothers of Dawat-e-Islami until late night and then I slept after 2 am.

O devotees of Rasool! Surely it is a Madani blessing of Dawat-e-Islami. Nineteen local students were privileged to complete the Holy Quran in Madrasa-tul-Madinah in Kampala, a city of an African country, Uganda. May Allah Almighty enable these students as well as us to serve His religion for the sake of the Holy Quran!

The next day, in the afternoon, we got the opportunity to go to the institute of the supreme Mufti of Kampala named Mufti Salman حفظە اللّٰە where we were privileged to meet him and other local Islamic scholars. These personages gave us great respect and also gave us the opportunity to deliver a speech. Further, here the presentation of Dawat-e-Islami was also given in the Arabic language which blessed Islamic scholars saw attentively. We requested blessed Islamic scholars to come to Pakistan and visit Faizan-e-Madinah, the global Madani Centre of Dawat-e-Islami, Karachi. They accepted our invitation. After the meeting, these blessed personages served us with a special dish of Kampala.

Visit to the site bought for Faizan-e-Madinah

After meeting the blessed Islamic scholars, we visited the land which was bought for Faizan-e-Madinah in Kampala. Here some meetings were held with the responsible Islamic brothers and then Du’a was made.

After this, we went to the house of an Islamic brother who had got his house built recently. We were privileged to do some Quran Khuwani and Du’a for the blessing in the house. Approximately 600 students from a nearby Islamic country named Comoros have come to Kampala for study. Some of them who are impressed by the religious services of Dawat-e-Islami came here to meet us. مَا شَـآءَ اللّٰە we noticed great passion for serving Islam in these students and اِنْ شَـآءَ اللّٰە the ‘Education Department’ of Dawat-e-Islami will start its work very soon over there.

Visit to the home of responsible Islamic brother

There is a preacher of Dawat-e-Islami named Shahid Manzoor Attari. He has come here from Pakistan and he is the responsible Islamic brother of Dawat-e-Islami here. His wife is also spreading the call towards righteousness amongst Islamic sisters. At his request we visited his home and took a cup of tea and made Du’a. Here we met a child who belonged to a Sayyid Family living in the neighbourhood. We were informed that the child had two holes in the heart. May Allah Almighty bless him with complete cure!

From here, we went to attend the Madani Halqah of car dealers and other traders where I was privileged to deliver a speech on the topics of Shab-e-Mi’raaj and Shab-e-Bara`at.

Last day of trip to Africa

The next day after having a light breakfast, we went to the home of a VIP at around 10:00. We had a meeting with him about the land which was bought for the construction of Faizan-e-Madinah in Kampala. He served us breakfast again after insisting on us and also made the intention that he would come soon with some VIPs to the 3-day Ijtima’ which would be held in Durban, a city of South Africa, after the arrival of the Nigran-e-Shura in the near future.

Afterwards, I was privileged to conduct the Nikah of a responsible Islamic brother, Ismatullah Madani, from Majlis Khuddam-ul-Masajid. We all together recited his Sahra.[1] May Allah Almighty grant him more and more blessings in this marriage!

We had a flight from Entebbe, a city of Uganda, to UAE in the evening at 4:20. We reached Entebbe where we went to the home of a trader Islamic brother. He served us food after insisting on us and made an intention to construct a Masjid in Entebbe for conveying Sawab to his father.

We left his home at 2 o’clock and reached the airport. On our arrival in Entebbe from Nairobi and now on the occasion of our departure, our seating arrangements were made in the VIP lounge. This is the respect we were given by virtue of the blessing of the Madani environment of Dawat-e-Islami as the local traders and other VIPs of this place used their influence and relationship for arranging this facility for us.

I was privileged to offer ‘Asr and Maghrib Salah by standing in the direction of Qiblah during the air travel towards UAE. Our travelling companion Hafiz Ashfaq Madani made this intention when leaving Pakistan that he would recite one Holy Quran completely in that entire travel. In the aeroplane, when the time of Maghrib began at the height of 35 thousand feet and Shab-e-Mi’raaj began, he recited the last verses of the Holy Quran and we made Du’a inside the aeroplane on the occasion of Khatm-e-Quran. May Allah Almighty accept his recitation of the Holy Quran and illuminate our hearts with the luminosity of Quran! O devotees of Rasool! This is the Madani environment of Dawat-e-Islami which gives us the mind-set of performing virtuous deeds in this unique manner. You also associate yourself with Dawat-e-Islami. اِنْ شَـآءَ اللّٰە you will attain the passion for the recitation of the Holy Quran along with other virtuous deeds.

When we reached Sharjah, the city of UAE, an Islamic brother was present there at the airport to pick us up. We first of all had a meal with him and then reached Golf Course Club of Sharjah where a Na’at gathering was held by Dawat-e-Islami on the occasion of Shab-e-Mi’raaj. When we reached the gathering, we saw that the Nigran of the Central Majlis-e-Shura Maulana Muhammad Imran Attari was delivering a speech and thousands of Islamic brothers were present there, listening to him. After the speech, Qasidah-e-Mi’raaj was recited, Du’a was made and then the Nigran-e-Shura met the Islamic brothers.

Dear Islamic brothers! In a city like Sharjah, thousands of Islamic brothers attended the gathering of Shab-e-Mi’raaj and then had the privilege to meet the Nigran-e-Shura after standing in a line. These are the clear signs of the popularity of Dawat-e-Islami. We should also have the privilege to attend weekly and other Sunnah-inspiring Ijtima’aat of Dawat-e-Islami held in our own cities and countries.

After the Ijtima’, a Sahari was arranged in the house of an Islamic brother where a large number of responsible Islamic brothers of Dawat-e-Islami and VIPs were present. Here we had the opportunity to meet the Nigran-e-Shura for some time. We returned to Karachi from Sharjah by the flight of 7:50 and, in this way, our Madani trip to five countries came to an end. May Allah Almighty accept our trip in the path of His religion and enable us to serve Sunnahs with sincerity and steadfastness until we are alive!