The Visit To UK 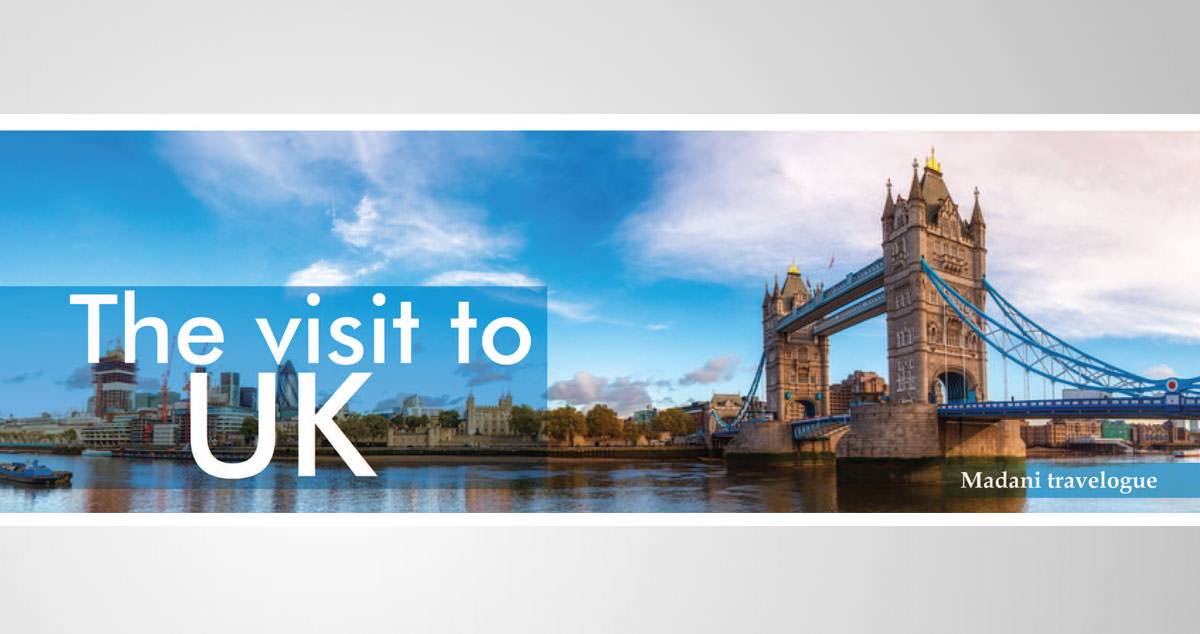 The visit to UK

The visit to Punjab

In mid-December 2019, we travelled with Nigran-e-Shura, Haji Muhammad Imran Attari سلّمه البارِی to different cities of Punjab. There, various consultations took place between Dawat-e-Islami’s Majlis-e-Shura and other representatives of Dawat-e-Islami. Alongside the various meetings and training sessions that took place, we also had the honour of visiting the shrines of Data Ganj Bakhsh Ali Hajwayri and Baba Fareed ud-Deen Ganj Shakar رَحِمَهُمُ الـلّٰـه. During those days, it was very foggy in Punjab.

Leaving for the UK

Upon returning from Punjab to Karachi, there was now the trip to UK for purposes of Madani work. Nigran-e-Shura departed on 19th December to reach UK via Dubai, whereas my flight was on 20th December. There were three of us who were going to fly out to Dubai on 20th December on a flight scheduled for 12 p.m., where we were going to wait for 1 hour and 25 mins before catching our second flight to Birmingham. When we arrived at Karachi Airport, we were informed that our flight has been delayed by half an hour. Upon hearing this, we became worried in thinking that this might affect our second flight. Anyhow, we arrived Dubai, offered Zuhr Salah and boarded the plane, where Nigran-e-Shura was already present.

Our flight took off at 2 p.m. local time. The journey time from Dubai to Birmingham is approximately seven hours and 15 minutes by air. Nigran-e-Shura spent most of his time in reading and preparing for the many speeches that he had to deliver during his two-week stay. I also spent my time in discussing some important matters with Nigran-e-Shura, reading and resting. We offered Asr and Maghrib Salah in congregation on the plane. An area can be found on the plane where Salah can be offered whilst standing, and the direction for Qiblah can be ascertained by asking a flight attendant or through the use of various mobile applications.

اَلْـحَمْـدُ لـِلّٰـه Dawat-e-Islami’s IT department has also created an excellent application by the name ‘Prayer Times’ which can be used to ascertain Salah timings and the direction of Qiblah. This application can be downloaded by typing Prayer Times Dawat-e-Islami into the Play Store or using the link given below.

Dear Islamic brothers, even the busiest of people are usually free from dealing with financial and domestic matters when travelling. If we make an effort, the time we have whilst travelling can be utilised to better this life and the hereafter. Whilst travelling, we can use a mobile phone or a tablet to listen to the recitation of the glorious Quran; read religious books; listen to Sunnah-inspired speeches, the Madani Muzakarah or Na’ts of the Prophet صَلَّى الـلّٰـهُ عَلَيْهِ وَاٰلِهٖ وَسَلَّم; remain occupied in reciting Salat upon the Prophet and other good deeds that will prove to be beneficial for this world and the hereafter. Conversely, whilst travelling, listening to songs, watching films or looking at impermissible things can be a cause for ruin in this world and the hereafter.

We arrived at Birmingham Airport at approximately 7 o’clock, and after undergoing checks at Immigration, we exited to find many brothers present to welcome Nigran-e-Shura. Not only were there brothers from Birmingham, rather, there were brothers from London, Bradford and other cities from across the UK. After meeting them at the airport, we arrived at Faizan-e-Madinah. People usually rest after such a long journey, but as there was a crowd of Islamic brothers, hence meeting them took quite some time.

Participating in a Nikah ceremony

Subsequent to meeting people, I participated in the Nikah ceremony of the son of the preacher of Dawat-e-Islami, Qudrat Ullah Attari, and also had the honour of solemnising the Nikah. Many honourable scholars and Islamic brothers were also present.

At 9 p.m. local time, the preacher of Dawat-e-Islami, Sayyid Fuzayl Raza Attari, hosts a live program on Madani Channel English by the name ‘Path to Success.’ Upon his request, Nigran-e-Shura participated in this program, and I also participated after my return from the Nikah ceremony.

By the grace and mercy of Allah Almighty, Madani Channel is spreading the invitation towards good not only in Urdu language, but also in English and Bangla languages. اِنْ شَــآءَالـلّٰـه the day is not far when the blessings of Madani Channel will be seen in Arabic as well as other international languages. At approximately 11 p.m., after the program ‘Path to Success’, we were extremely tired, and so we rested immediately.

The start of the training session

The next day, after Fajr Salah, the training session began for the responsible Islamic brothers of Dawat-e-Islami from across the UK. The first day of the training session was specific for Nigran-e-Kabinahs and the members of the Kabinah Islamic brothers. After Fajr Salah, I had the honour of delivering a speech on the topic of ‘The Quran is a Treasure’, in which some Madani pearls were given regarding the commentary of the Holy Quran. A mindset was given to recite and understand the Glorious Quran. Thereafter, it was time for breakfast and rest.

At approximately 7 p.m., after the Madani Muzakarah, Isha Salah was offered and we had dinner. Thereafter, the training session resumed at 8 o’clock, and Nigra-e-Shura continued to educate the responsible Islamic brothers on various matters until around midnight. During this session, at times there was mention of fearing Allah Almighty and purifying the inner-self, and at other times, our hearts were illuminated with the mention of Madinah. There were moments when there was an overwhelming atmosphere. There were also moments where the Islamic brothers expressed their good intentions, bringing about much happiness.

May Allah Almighty accept this journey of ours and give us the ability to serve the religion with sincerity until our final breath.