Why Do We Hate 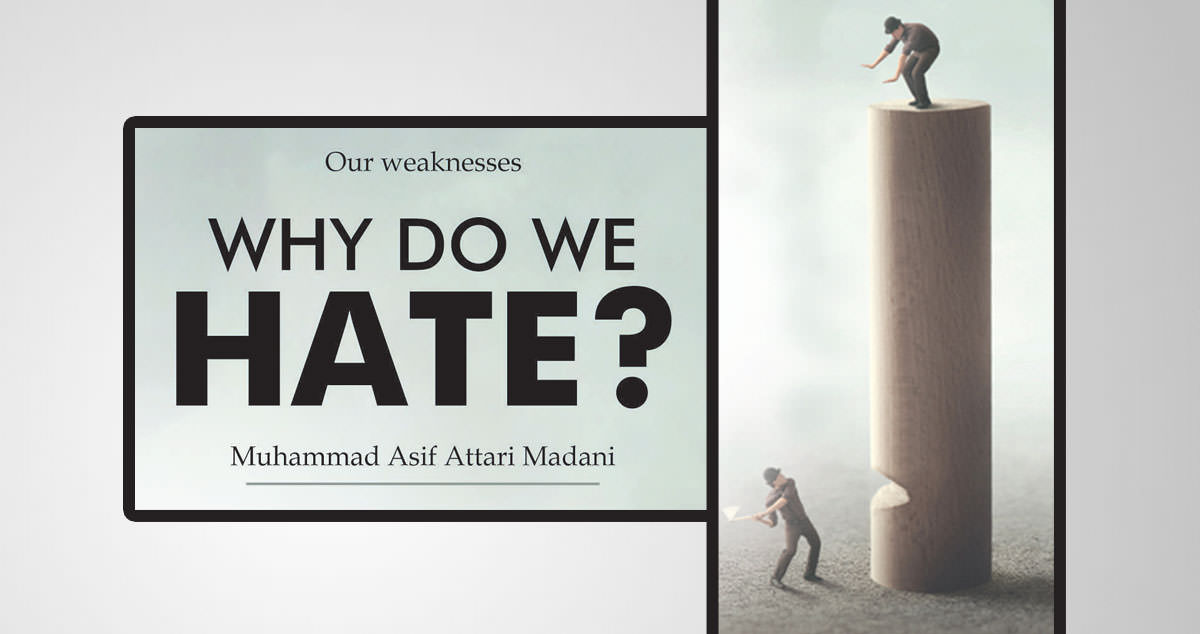 Why do we hate?

On 7th August 2019, a heart rendering incident took place near Sargodha in which a university student opened fire during a domestic dispute and killed six people of his own household. Those killed included his brothers, sister in laws and nephews. After the killings, the young man also shot himself and committed suicide. The video of the killer which was recorded prior to the killings also surfaced in which he released a statement saying: ‘I was hated, do not hate someone so much that he begins to hate others.’ (Geo news website)

Dear readers of the Monthly Magazine Faizan-e-Madina! Committing suicide or killing someone unjustly are both impermissible and Haraam. This tragic incident was the result of hatred and enmity that had developed in the heart. In Arabic, the heart is called ‘قلب [Qalb]’, meaning that which changes. In the Blessed Ahadees, the heart has been compared to a wing which is being blown by the winds in the desert. (Ibn-e-Majah, vol. 1, pp. 67-68, Hadees 88)

Whether it is a child, a youngster or an elderly person, the heart goes through different sentimental feelings and states. Sometimes, upon seeing a distressed person, the passion to help and sympathise with him is developed (in the heart) and at other times, it feels happiness and sadness when experiencing something happy or sad. A person’s heart is sometimes filled with such mercy that he even feeds the sparrows, pigeons and other birds daily and places water for thirsty birds and at times, a person becomes so hard hearted that he does not even refrain from oppressing a helpless animal.

O devotees of the Prophet! Just like many other sentiments, love and hate are also a part of the heart. A good relationship is maintained with the person for whom there is love in the heart and his social life also remains peaceful; whereas, hatred damages relations with one another. It distances a brother from his own brother, a friend from a friend and a husband from his wife. Hatred tarnishes the unity of a family; instead of being a well-wisher for his fellow Muslim brother, hatred leads to a person becoming happy upon the other being harmed; hatred renders a person ill-charactered; it is this hatred that causes fighting and quarrelling; it leads to murders and enmity which remains for many generations. Nowadays, our states are in such decline that the fragrance of love is spread infrequently whereas the fire of hatred is encompassing our society very rapidly.

Why do we hate?

Every disease has one cause or another; there are at least nine possible causes of someone becoming involved in hatred:

1.   As opposed to what we expect, when a loved one or a friend does not meet our expectations; e.g. we encountered an emergency situation and after we asked for help, our loved one or friend turned a blind eye to us. This could sow a seed of hatred for them in our heart which could grow into being a tree [of hatred].

2.   When our subordinate continues to act contrary to our nature, then a day comes when he no longer has a place in our heart and such a situation ensues that we even sense a smell of bad odour from his fragrance. No matter how amazing the work he produces it, we nit-pick unnecessarily.

3.   If someone degraded us before other people or he rebuked us or criticised us without a need, then we start despising that person. If this feeling is not controlled, then one day we can end up having hatred for him.

4.   A wrong approach while rectifying can also lead to hatred. Commonly, our state when rectifying people is such that we do so in front of everyone without a Shar’i need by mentioning the person’s name or by staring directly at him and exposing him. Ask your conscience, was this rectifying him or degrading him? Will this improve him or make him worse? Remember, if the person we are addressing becomes silent due to being overawed by us and accepts what we say, feelings of disgust will still remain in his heart which can open the doors of enmity, malice and hatred etc. If only we learn how to rectify properly.

5.   Success and failure are a part of life. However, some people feel that it is their responsibility to discourage those who fail. There are only a few people who love such an individual who discourages whereas there are plenty more who hate him.

6.   Speaking is a skill and hearing is an even greater skill. Many have the desire to speak, but only a few have the willingness to listen. Such people do not hesitate at all to unnecessarily interrupt the speech of others just to have their own say. This habit of theirs also leads to earning hatred.

7.   Becoming angry at everything, shouting and screaming, and being irritated at trivial matters is a sign of having a bad character. A bad character does not lead to love, it instead leads to the development of hatred.

9.   Being suspicious about someone, having a negative assumption about them or being jealous of them also severs love. 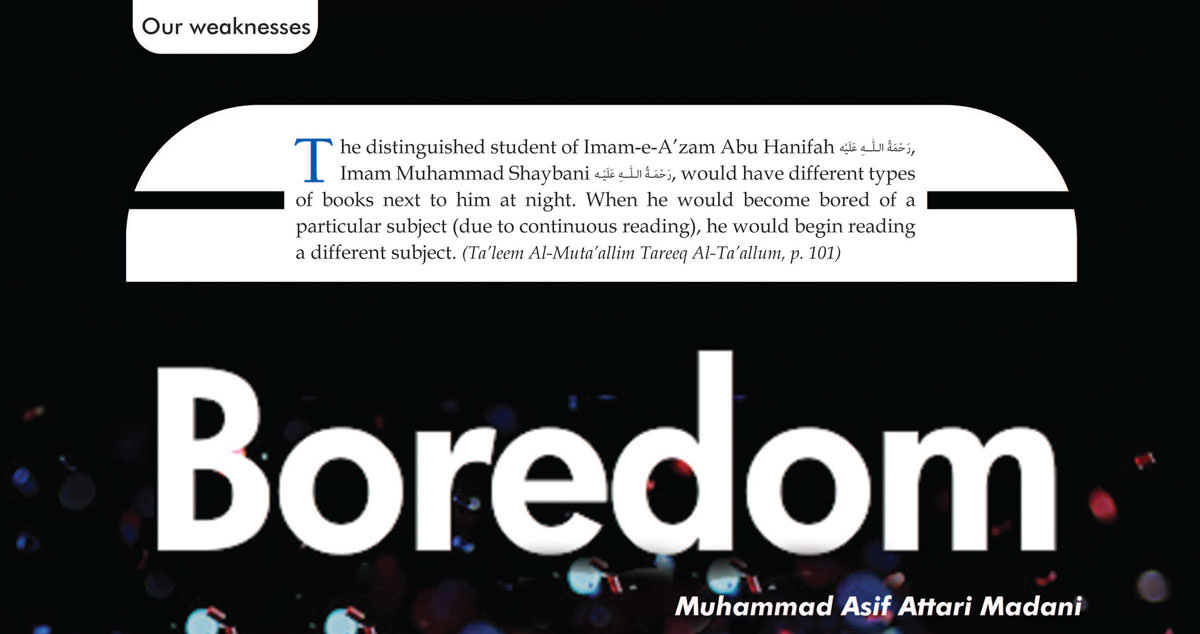 Dear readers of the Monthly Magazine Faizan-e-Madinah! On many occasions, we are not interested in doing something yet we still have to do it, whether we have to wait at length for someone; we cannot sleep at night; the electricity goes and we have nothing to do; we are disinterested in studying but we still have to study; or we have to listen attentively to someone’s dull speech, we feel apathy and laziness in the heart which is known as boredom.

It is thought that the easiest solution for boredom is to involve oneself in an enjoyable action. Hence, when children become bored, they begin to play with their toys, youngsters go out to socialise with their friends, elderly people gather at a get-together spot in the area, some people read books to remove their boredom whilst others read digests and novels. From one perspective, those who watch films and dramas, listen to music, backbite and tale-tell in their gatherings and those who engage in using social media without a purpose are trying to attain salvation from their boredom, because if they were prevented from these activities, they will start to feel bored.

There is no harm to in engaging in activities that you like which will end your boredom; however, it is absolutely important to keep certain points in mind:

1.   Those engagements should not be an obstacle in fulfilling the Faraid and Wajibat. Whether it is outings or something else, it is not permissible by Shari’ah to miss the obligatory Salah due to this reason. Similarly, it is obligatory upon every Muslim to learn rulings relevant to his needs; e.g. Shar’i rulings of Beliefs, Salah, Fasting etc., so if one continues reading books which consist of only worldly knowledge or parables, he will then remain deprived of learning obligatory knowledge.

2.   The priceless blessing of time should not be wasted, because this wealth was not given to us to squander on useless things, rather, we should use it to better our worldly life as well as our Hereafter. If a student of Islamic knowledge wastes his time roaming around here and there instead of studying, it would be very difficult for him to become an excellent and erudite scholar.

3.   That engagement should not consist of any sinful act which will harm our Hereafter; e.g. if someone watches a film or drama, this is a sin and an act that leads to Hell. Likewise, if one is sitting in a gathering where someone is being backbitten or tale telling is taking place against him, he is being slandered or his hidden flaws are being disclosed, in this case, alongside the one who is uttering these things, the one listening with interest will also be sinful.

4.   No one’s right should be violated; e.g. if a teacher carries on using his phone, this will affect the students’ education and the teacher (who does this for more than the prevalent custom allows) will not be permitted (by Shari’ah) to take a wage for that duration of time. Similarly, if an office worker leaves his work due to boredom and engages in some personal work (i.e. lengthy calls at home, using social media or reading the newspaper), he will not be entitled to his wage for that duration of time. (In this regard, it is very beneficial to read Ameer-e-Ahl-e-Sunnat’s دَامَـتْ بَـرَكَـاتُـهُـمُ الْـعَـالِـيَـهْ booklet titled ’50 Madani Pearls of Earning Halal Sustenance’).