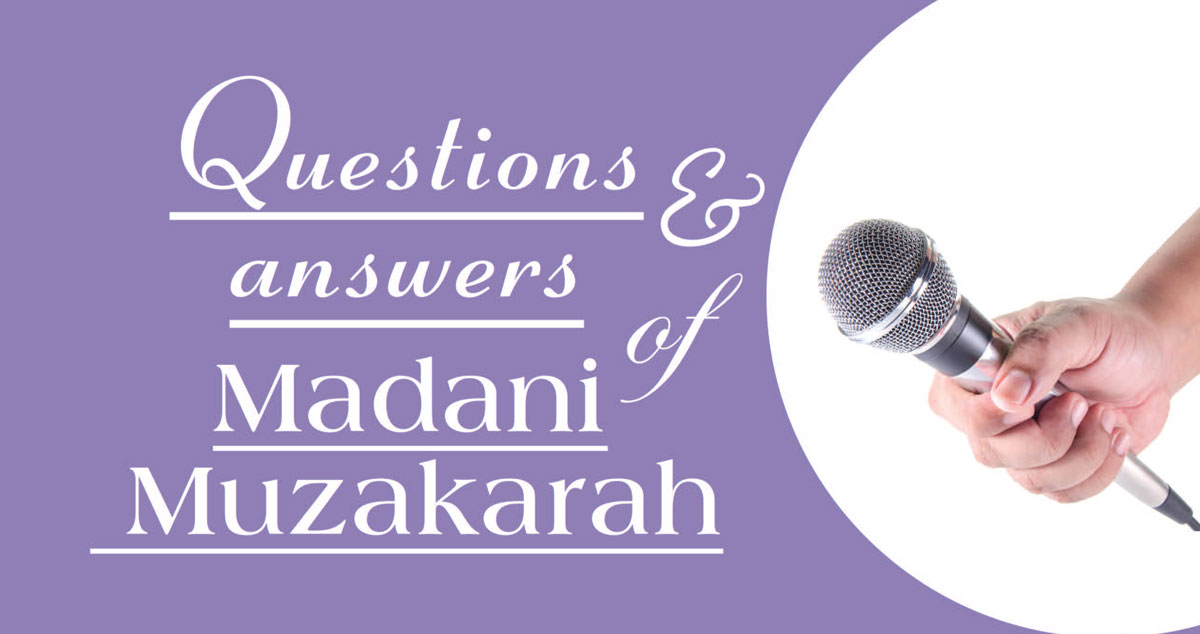 Who is the superior prophet after the Beloved Prophet صَلَّى اللّٰهُ عَلَيْهِ وَاٰلِهٖ وَسَلَّم?

If the buttons of a jacket are undone during Salah, … ?

Question: Will Salah be considered to be valid if the zip or buttons of a jacket or jersey etc. are undone during Salah?

Answer: Yes, Salah will be considered to be valid. (Madani Muzakarah, 3 Rabi’-ul-Aakhir 1440 AH)

Question: Are the virtues of someone equal to the number of the stars in the sky?

The Beloved Rasool صَلَّى اللّٰهُ عَلَيْهِ وَاٰلِهٖ وَسَلَّم said: All the virtues of ‘Umar are just like one virtue (that of the cave) out of the virtues of Abu Bakr.[2] (Madani Muzakarah, 3 Rabi’-ul-Aakhir 1440 AH)

Ruling on checking others’ mobile phones

Question: Some people have a habit of checking others’ mobile phones and reading their messages. What do you say about this act of theirs?

Answer: It is impermissible. It is stated in a blessed Hadees: One who sees the letter of his brother without taking permission, he indeed sees in the fire.[3] Moreover, people may have several secrets in their mobile phones such as the pictures of Maharim and personal chats with them etc. It is impermissible for a stranger to see and read them without taking Shar’i permission. If someone has already done so, he or she should repent. If you give your mobile phone to someone, tell him or her: If you want, you can make a call etc., but do not see anything else in it. (Madani Muzakarah, 4 Rabi’-ul-Aakhir 1439 AH)

Question: Do stones have any efficacy?

Answer: Yes! Stones also have efficacy, and only Allah Almighty has kept efficacy in them because Allah Almighty is the One Who creates efficacy. The efficacy of stones has also been mentioned in blessed Ahadees. Mufti Ahmad Yar Khan Na’eemi رَحْمَةُ الـلّٰـهِ عَـلَيْه has said: The gem of agate is very blessed.

It is stated in a blessed Hadees: ‘تَخَتَّمُوْا بِالْعَقِیْقِ فَاِنَّہٗ مُبَارَکٌ’ (i.e. wear the ring of agate as it is blessed.)[4] Furthermore, he رَحْمَةُ الـلّٰـهِ عَـلَيْه has said: The gem of black agate in a silver[5] ring is very great.

It is stated in some narrations that the ring of yellow ruby protects against plague. In some narrations it has been stated that the ring of agate eradicates poverty[6]. In Faiz-ul-Qadeer it has been stated: The one who wears the ring encrusted with the gem of agate will find every kind of goodness and angels will love him. One of its qualities is that a person’s heart remains peaceful at the time of a quarrel and his nose does not bleed anymore.[7] (Madani Muzakarah, 15 Rabi’-ul-Aakhir 1440 AH)

Question: If someone sleeps before ‘Isha Salah, can he or she offer Salah at any time after getting up in the night?

Answer: The time of Isha remains until dawn. If someone gets up in the night before dawn and offers Salah at any time, the Salah will be considered to be valid. However, offering Salah with Jama’at [congregation] is Wajib. Missing Jama’at without any Shar’i compulsion is a sin. Furthermore, it is forbidden to sleep before the Isha Salah, and it is not Sunnah either.

Question: Can Du’a be made for the forgiveness of the person who has committed suicide?

Answer: Funeral Salah of the person who has committed suicide will be offered and Du’a for his forgiveness can also be made. (Madani Muzakarah, 9 Rabi’-ul-Aakhir 1440 AH)

Question: If a person tells a lie and also offers Salah, will his Salah be considered to be valid?

Answer: Telling a lie is a sin, Haram and an act leading to Hell. It is necessary to repent of it. However, if someone tells a lie and also offers Salah, his Salah will be considered to be valid. (Madani Muzakarah, 10 Rabi’-ul-Aakhir 1440 AH)

[5] Whenever you wear a ring, take care that you wear only one silver ring, weighing less than 4.5 Masha (i.e. 4 grams, 375 milligrams). Do not wear more than one ring, and the ring must be encrusted with only one gem. It must not be encrusted with more than one gem. Do not wear a ring even without a gem. There is no limit to the weight of gem. A man is not allowed to wear any other metal ring  except for silver or the above-mentioned weight of silver etc. (Namaz kay Ahkam, pp. 444-445)