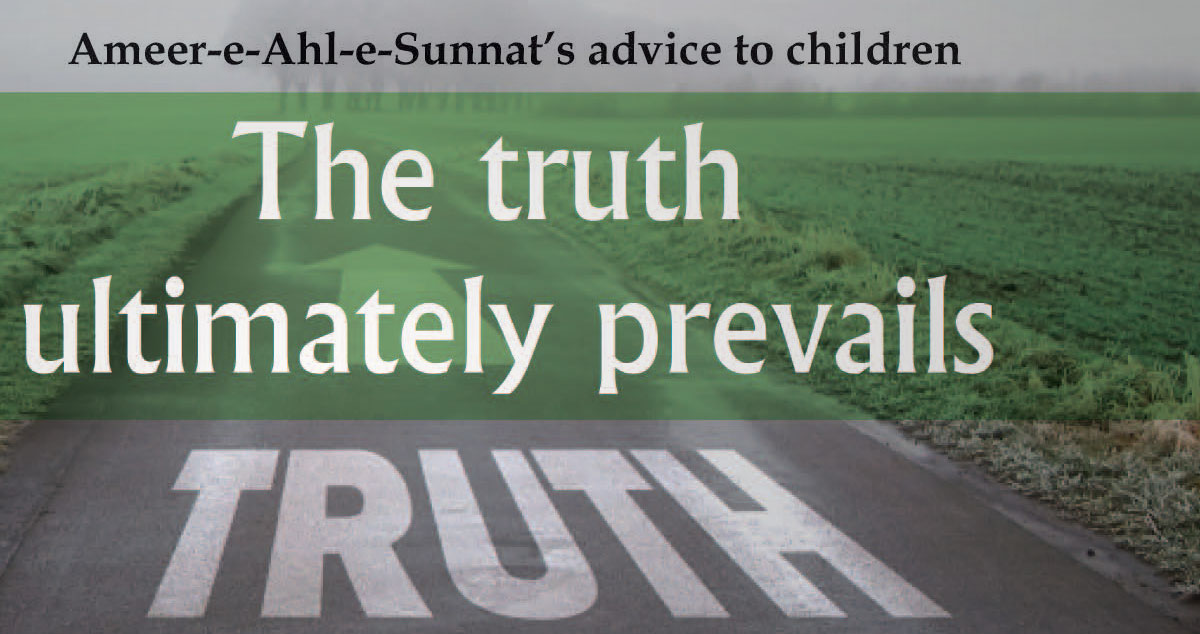 Our beloved Ameer-e-Ahl-e-Sunnat, Muhammad Ilyas Attar Qaadiri دَامَـتْ بَـرَكَـاتُـهُـمُ الْـعَـالِـيَـه has said: I have been speaking the truth since my childhood and I was afraid of telling a lie.[1]

Dear children! Good children always speak the truth and do not do anything for concealing which they have to tell a lie. If they do something wrong, they do not tell a lie when they are asked about it.

Dear children! What reward is reaped for speaking the truth? Let’s try to get the answer from Ameer Ahl-e-Sunnat: Ameer Ahl-e-Sunnat دَامَـتْ بَـرَكَـاتُـهُـمُ الْـعَـالِـيَـه has said, ‘Speaking the truth earns a person respect in the world and the Hereafter; one who speaks the truth always succeeds because it is said, ‘The truth ultimately prevails’. The one who speaks the truth should have no fear. (Jhoota Chor, pp. 18-20)

Dear children! The thing that is opposite to the truth is called ‘a lie’. For instance, you eat something from the refrigerator, but when your mother asks you, you reply: ‘I have not eaten anything from it’, so it is a lie.

Lying is an act that displeases Allah Almighty and nobody believes the person who repeatedly tells lies.

Dear Children! You also make a firm intention that you will always speak the truth and will never tell a lie.

Now chant a slogan in unison:

We will continue to fight against a lie;

Dear children! We should all try to act upon the advice given to us by the Ameer of Ahl al-Sunnah دَامَـتْ بَـرَكَـاتُـهُـمُ الْـعَـالِـيَـهْ

Dear children! We learn that we should not speak ill of our homeland Pakistan. Our homeland is our own,

One should not be cruel to animals. Be kind to them, as they turn to Allah if someone hurts them.

aIt is illegal for under-18s[1] to drive a car. It is dangerous and you risk having a serious accident.

Beloved children! Ramadan is a month of great mercy and blessings. We should fast in this blessed month,

‘The Night of Forgiveness is a very important night. Do not spend this night in negligence. Great mercy descends on this night.’[1]

‘Young children should serve their parents. If they serve them now, they will continue to serve them when they grow up.

‘The good deeds of non-adolescent children are accepted, and they can convey the reward [of their deeds] too.

There are many disadvantages of flying kites. Flying kites is a form of wasting both, time and money,

‘Dear children, one should use the slippers placed near the toilet or bathroom when required.