The Misfortune of Disrespect | Punishment for Disrespectful Behavior

The Misfortune of Disrespect

A well-mannered person is successful in this world and the Hereafter whereas the person who lacks decorum and respect is sure to fail in both realms. A lack of respect pushes a person into the deep pit of ruin.

A chieftain of the disbelievers in Arabia once insulted Allah Almighty when he was invited to Islam by the noble companions رَضِىَ الـلّٰـهُ عَـنْهُم. As a result, he was fatally struck by lightning:

‘And He sends thunder, He henceforth causes it to strike upon whomever He wills, whilst they (the disbelievers) are disputing concerning Allah, and severe is His Grip.’

Ponder on this account. One should never utter a disrespectful word about Allah Almighty. ((‘Ajaaib-ul-Quran Ma’ Gharaib-ul-Quran, pp. 326-327))

The manuals of jurisprudence unanimously agree that the slightest disrespect of the noble prophets عَـلَـيْهِمُ السَّلَام is blasphemy. (Bahar-e-Shari’at, vol. 1, p. 47)These examples demonstrate the worst, and very real, outcome of insolence: loss of faith – and refuge is with Allah Almighty.

The person who does not respect knowledge will remain bereft of its blessings; the one who does not respect his teacher will not be able to teach effectively or share his knowledge himself; (Rah-e-‘Ilm, p. 32) and the one who disrespects the pious predecessors will never succeed, as evident from the account of Ibn al-Saqqā and Shaykh ʿAbd al-Qādir al-Jīlānī رَحْمَةُ الـلّٰـهِ عَلَيْه when they went to visit a man of Allah. The former was disrespectful while the latter observed manners. In the end, Ibn al-Saqqā became an apostate while Shaykh ʿAbd al-Qādir al-Jīlānī رَحْمَةُ الـلّٰـهِ عَلَيْه emerged as one of Islam’s towering figures and foremost saints. (Bahjat al-Asrār, p. 19)

Disrespecting the Prophet’s offspring warrants their grandfather’s displeasure. The Beloved Prophet صَلَّى الـلّٰـهُ عَلَيْهِ وَاٰلِهٖ وَسَلَّم explained that insolence towards one’s parents leads to a loss in both worlds. A lack of reverence for sacred relics is also very dangerous: five individuals from the Amalekites were destroyed because they disrespected the Chest of Tranquillity. (Ṣīraṭ al-Jinān, vol. 1, p. 373) The disciple who disrespects his spiritual mentor (murshid) will never attain his blessings.

To summarise, respect leads to success, whereas insolence casts a person into the pits of misery. We should avoid every action and statement that entails any form of disrespect. To learn respect, we must accompany people who possess it. 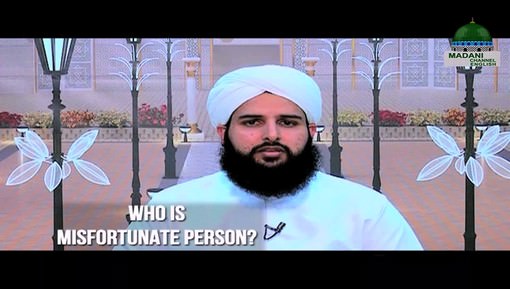 Who Is Misfortunate Person?