The Disease of Arrogance

The Disease of Arrogance

Just as human deeds are apparent, like prayer, and hidden, like sincerity, human misdeeds are also two-fold; apparent, like murder, and hidden, like arrogance and egotism. “There is a special link between our outward actions and the ˹spiritual˺ state of the heart,” Imam al-Ghazālī رَحْمَةُ الـلّٰـهِ عَلَيْه writes. “For the corrupt heart engenders corrupt outer actions, while the heart which is pure of jealousy, ostentation, arrogance, etc., motivates pure actions.”[1]

Definition of arrogance: To consider yourself superior to others. [2]

2.   Arrogance towards Allah’s prophets—this type of arrogance is also disbelief.

3.   Arrogance towards other people by considering them of less worth than yourself. Even though this type of arrogance is not as severe as the first two, it is a deadly sin of the heart and completely forbidden.[3]

5 hadith of the Prophet صَلَّى الـلّٰـهُ عَلَيْهِ وَاٰلِهٖ وَسَلَّم on the harms and detrimental consequences of arrogance:

1.   Disgrace: On the Day of Judgement, Allah Almighty will resurrect arrogant people in the form of ant-sized humans. They will be humiliated and dragged to the prison of Hell called Būlas. A great fire will overwhelm and engulf them, and they will drink the pus of the dwellers of Hell.[4]

2.   Destruction: Allah Almighty said that the “shawl” of superiority (kibriyāʾ) belongs to Him alone, and He will destroy those who contest Him in this matter.[5]  Mufti Ahmad Yar Khan رَحْمَةُ الـلّٰـهِ عَلَيْه states that “shawl” is used to aid understanding: just as two people cannot wear one shawl, superiority is for Allah alone and cannot be claimed by others.[6]

3.   Deprivation of mercy: On the Day of Resurrection, Allah will not be merciful with the person who used to drag his lower garment out of pride.[7]  Imam Ahmad Raza Khan رَحْمَةُ الـلّٰـهِ عَلَيْه states: “Hanging the lower garment below the ankles out of arrogance or vanity is forbidden. Otherwise, it is disliked and unpreferred.”[8]

5.   Distant from the gathering of the Prophet صَلَّى الـلّٰـهُ عَلَيْهِ وَاٰلِهٖ وَسَلَّم : “On the Day of Judgement, the people I despise the most and those furthest away from my gathering will be the individuals who mocked others, used foul language, and the arrogant folk.”[11]

Ask yourself: does egotism have any benefit other than momentary pleasure for the carnal self? Compare that to its harms: the displeasure of Allah Almighty and His Messenger صَلَّى الـلّٰـهُ عَلَيْهِ وَاٰلِهٖ وَسَلَّم , the displeasure of people, humiliation on the Day of Standing, deprivation of Allah’s mercy, and being cast into the Fire. Arrogance is not a source of dignity, nor is it a means of reaching greatness and success. However, it is a cause of severe humiliation.

The cure for arrogance is to hold yourself accountable. If arrogance is a result of knowledge, worship, wealth, lineage, rank, success and beauty, know that these are the blessings of Allah; so how can one be arrogant about this? If, Allah forbid, this earns the displeasure of Allah on the Day of Judgement, how will one bear the painful torment of Hell? May Allah Almighty grant us protection from arrogance and all other diseases of the heart. 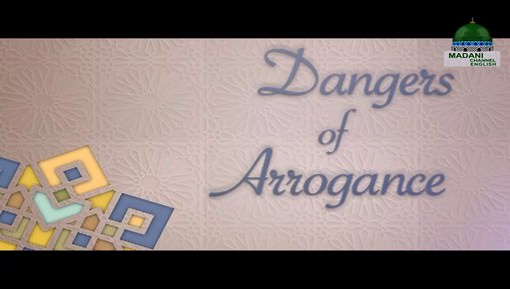