Understanding Children's Behaviour | Reading Between the Lines of what Children say

Reading between the lines of what children say

You may have heard the following statements, or something similar, from children at some point or another:

Although insignificant at first glance, these statements can actually have noteworthy, psychological implications. In this article, we will explore the deeper meanings of such words, how they can be reflective of underlying issues in the home, and what parents/carers can do to help.

Have you ever pondered or tried to understand why children might say, ‘I never did anything, he did it?’ One typical cause is fear: The child may have truthfully admitted to their mistake in the past, but seeing how their honesty was met with being scolded, they now remain fearful of the outcome, choosing to blame the mistake on someone else instead. This is the adverse outcome of dealing with children in an angry or punitive manner; they will eventually learn to lie in an attempt to save themselves from the distress of being scolded. This approach to parenting effectively drives the child to lying. Therefore, instead of rebuking children or shouting at them, advise them with respect and compassion. Highlight the child’s mistake so that s/he can understand their error. Doing this will promote a safe and healthy environment for the child to grow and recognise their parents as guides and not enemies. The child will thus become accustomed to telling the truth, without fear of admonishment, and be able to differentiate between right and wrong.

Consider a child who is berated for something s/he did; they are unhappily sitting in the corner of the room in silence. Imagine what that child’s response would be if you were to ask them why s/he is so sad? Assume the child tells you that, ‘I am constantly being told off by everyone.’ Can you imagine the degree of pain that is hidden in these innocent words; so much pain that a child can neither fully comprehend nor express only feel. Each instance of scolding will chip away at the child’s confidence and intellectual capability, until eventually, the child is permanently damaged.

These implications extend to all of the other statements that we listed in the beginning of the article.  If you hear any of those words from your child, then take it as the child’s cry for help and understand that you need to make changes in your parenting and home environment.

Children who are exposed to a negative home environment that is characterised by shouting, scolding, and punishments, or a child whose upbringing is neglected, their intellectual capabilities are severely harmed. Unless supported, these children will often face major obstacles in adulthood as they battle self-esteem issues and a lingering sense of failure.

From the bottom of my heart, I plea to parents: For the sake of Allah عَزَّوَجَلَّ, reform the manner in which you nurture your children, develop their capabilities, value their delicate feelings, and support them to grow. Your correct approach to parenting can make them productive members of society.

May Allah عَزَّوَجَلَّ give us all the ability to act accordingly.

A Karachi based Imam described a tragic incident that occurred in his locality. He explained that a kite

In this article, we share some words of wisdom from a school principal during his meeting with parents:

Our words do not impact the behaviour of children as much as our actions do.

Although insignificant at first glance, these statements can actually have noteworthy, psychological implications.

You may have heard the following statements, or something similar,
Read Article 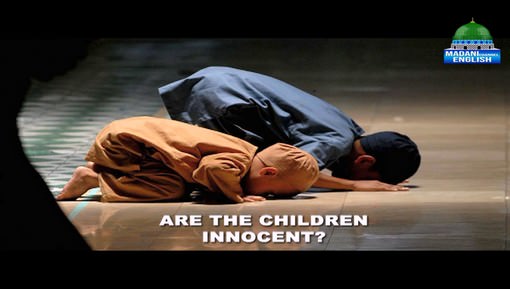 Are The Children Innocent