The Saliva of the Prophet ﷺ

Khubayb and Suhayb would sometimes go to the park with their grandfather. Their grandfather would walk in the park for a while and then sit on the bench while these two brothers would play.

One day, they were both walking home whilst holding their grandfather’s hand, and their grandfather said: ‘What is the matter, Suhayb? Why do you keep spitting, and that too in the direction of the Qiblah?’

Suhayb asked in surprise, ‘Qiblah? What is Qiblah, grandfather?’

‘I will tell you when we return home. First, tell me why you keep spitting?’ replied their grandfather.

Grandfather said to him: ‘Doing this without any reason is not good, and you are a good child, aren’t you? And good children do not do bad things.’

When they arrived at home, Umm Habibah gave some water to grandfather. Thereafter, Suhayb said: ‘Grandfather! Now tell us what Qiblah is?’

Grandfather explained: ‘The Ka’bah is called Qiblah because we face the Qiblah in Salah.’

Khubayb immediately reacted and said: ‘Oh, that’s why that uncle from Punjab was asking you for the direction of Qiblah.’ Khubayb then asked, ‘Are we allowed to spit in the direction of the Qiblah?’

Grandfather answered: ‘No, son. This is prohibited. We should show great respect to the Ka’bah; we should neither lie down with our feet pointing towards it, nor should we spit in its direction. The Final Prophet صَلَّى الـلّٰـهُ عَلَيْهِ وَاٰلِهٖ وَسَلَّم once saw an imam spitting in the direction of the Qiblah, so he صَلَّى الـلّٰـهُ عَلَيْهِ وَاٰلِهٖ وَسَلَّم became displeased at this and stopped him from leading the Salah ever again.’[1]

Grandfather then added: ‘Saliva is a great blessing of Allah Almighty.’

Khubayb and Umm Habibah asked in amazement, ‘Really? How is that, grandfather?’

Grandfather said: ‘I will tell you about its benefits, and then you will realise how great a blessing it is.’

He then explained, ‘Now, listen to the benefits of saliva:

1.   It strengthens the teeth.

3.   It protects the mouth and everything inside it from becoming dry.

4.   Saliva helps in digesting food. Children, remember that the more we chew our food, the more saliva is produced. Hence, we should chew our food properly when eating.

6.   It is because of saliva that we can speak easily. It would be very difficult for us to speak if no saliva or little saliva was produced.’

‘Oh no, grandfather! I wasted a lot of saliva today. What should I do?’ cried out Suhayb.

Hearing Suhayb’s words, everyone began to laugh. Grandfather said, ‘Do not do this again, as good children do not do this.’

‘Okay, grandfather,’ responded Suhayb, ‘I will not do this again.’

Tapping him on the back, grandfather said, ‘Well done! I will tell you about a miracle on account of your promise.’

Umm Habibah immediately said: ‘Grandfather, you told us about a miracle yesterday and said that doctors find the need to perform surgery, whereas our Beloved Prophet صَلَّى الـلّٰـهُ عَلَيْهِ وَاٰلِهٖ وَسَلَّم did not. Can you tell us about a miracle linked to this?’

Grandfather thought for a while and then said, ‘Okay, listen. You all know that in the early days of Islam, the disbelievers would attack Muslims. On one such occasion when the disbelievers attacked, Sayyiduna Mu’aaz Bin Afra’s رَضِىَ الـلّٰـهُ عَـنْهُ entire hand was amputated.’

Expressing dismay, all three children asked, ‘Then? Then what happened, grandfather?’

Umm Habibah said: ‘Grandfather, one day, our teacher told us that if a part of the body is cut off, it should be reattached immediately, because if there is a delay in attaching it, the severed part no longer remains viable and becomes dysfunctional.’

Grandfather said, ‘Yes, child. What your teacher said is correct, and doctors say the same too.’

Khubayb asked, ‘Then what happened, grandfather?’

Grandfather went on to say: ‘The Prophet صَلَّى الـلّٰـهُ عَلَيْهِ وَاٰلِهٖ وَسَلَّم placed his blessed saliva on the companion’s arm and reattached his hand, and the hand became fine at once.’[2]

Suhayb innocently asked, ‘Grandfather, what kind of saliva was it?’

Smiling, grandfather replied: ‘It was a special kind. Many illnesses and difficulties are removed through it. The saliva of the Prophet صَلَّى الـلّٰـهُ عَلَيْهِ وَاٰلِهٖ وَسَلَّم contained blessings.’

‘Remember, children, we should show utmost respect towards the prophets. And whenever we mention something associated to them, we should use respectful terms. For example, when referring to the sandals of the Prophet صَلَّى الـلّٰـهُ عَلَيْهِ وَاٰلِهٖ وَسَلَّم, we should call them the blessed Na’layn.’

Umm Habibah said: ‘Grandfather, do you know my friend’s brother, his hand was severed. When it was operated on, it took 8 to 10 hours for the surgery and then many months for it to recover properly. However, our Beloved Prophet صَلَّى الـلّٰـهُ عَلَيْهِ وَاٰلِهٖ وَسَلَّم could heal people within seconds. First the miracle regarding the eye, and now the hand; both are amazing miracles!’

Grandfather said: ‘Well, these are the miracles of our Beloved Prophet صَلَّى الـلّٰـهُ عَلَيْهِ وَاٰلِهٖ وَسَلَّم, and there are many miracles where people were healed in seconds.’

‘So tell us about another miracle then, grandfather’, requested Suhayb.

Grandfather smiled and said, ‘It is almost time for Maghrib. First, we will offer Salah, and then I will tell you about a miracle. Come on children, let us go to the masjid to pray Salah.’

One Sunday, Granddad left the masjid after Fajr and headed to the local park. His grandchildren,

“Granddad has told us of many miracles performed by our Prophet صَلَّى الـلّٰـهُ عَلَيْهِ وَاٰلِهٖ وَسَلَّم. Remember the miracle

Later, as the children were enjoying the party and gorging on the delicious snacks, Granddad came in and said,

“Umm Habiba! Where’s Grandad?” bellowed Khubayb. “Why? said Umm Habiba. “Do you need to ask him something?”

“We will play on the swings, eat some snacks, and have fun,” Khubayb and Umm Habibah answered.

Suhayb returned home from tuition. “Show me what you guys bought from the shop!” he shouted.

“Well, the animal becomes frightened, that’s for one,” explained Grandad. “It might even try to run away,

“It’s not even the month of Ramadan,” Suhayb asked, “why has Granddad ordered so many dates?”

a“What are you looking for?” asked Umm Habiba. “I am looking for a broom,” answered Sohaib.

“Sohaib has been gone since the morning, and now it’s the afternoon,” said Grandfather.

Khubayb and Umm Habibah went into grandfather’s room. Suhayb followed them in too.

Both brothers were reading a book whilst lying down. A small bulb was on in the room. 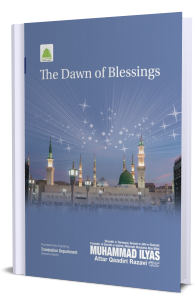 The Dawn of Blessings