Rights Of Women In Islam 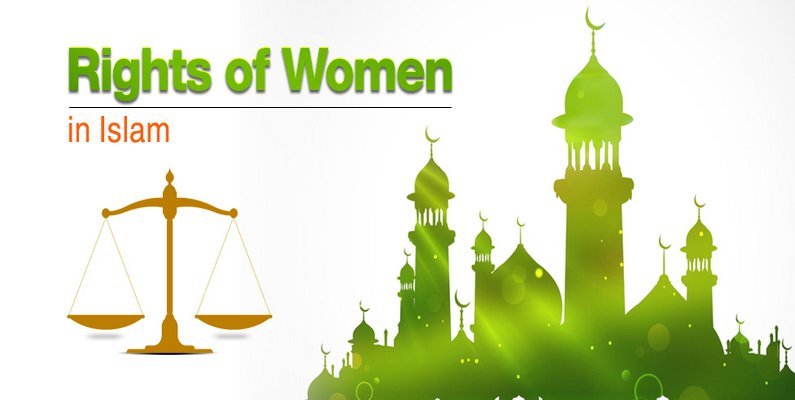 Islam is not the name of only a few beliefs and carrying out some obligatory acts, but it teaches humans the golden principles of life and blesses them with the light of knowledge provides them salvation from the darkness of ignorance. Islam guides humans in all the phases of life. Islam has not only stated the rights of others, but it has also brought salvation For women, who were the victims of the society in the pre-Islamic era. Islam has saved women from the cruelty, oppression and injustice of the society and has given them all the permissible rights from which they used to remain deprived of. In short, the status of women has been raised by Islam in the society by granting them respect which they could not even imagine in the pre-Islamic era.

Women were in a very terrible condition before Islam. They had no respect and importance in the world. For men they were only a kind of toy which they used to fulfil their Nafsani [carnal] desire. Women would serve men day and night in different ways, and whatever they would earn after working hard they would give to men, but even then the cruel men did not esteem the women, but rather they would beat them brutally. For a small reason, they used to cut the nose, ear and other body parts and sometimes even they would kill them. After the death of the father the way sons used to become the owners of his property and possessions, similarly they used to become the owners of his wives and would keep them forcefully as their female slaves. After Islam, Islamic women got relieved from such oppressions.

Women were not allowed to get any share from the inheritance of their parents, brothers, sisters or husband, nor could they become the owners of anything else.

In order to stop the cruelty and injustice which were being done to women before Islam, Allah عَزَّوَجَلَّ sent the Beloved Rasool Hazrat Muhammad صَلَّی اللہُ تَعَالٰی عَلَیْہِ وَاٰلِہٖ وَسَلَّمَ to this world with Islamic commandments. With the blessed arrival of the Beloved Rasool صَلَّی اللہُ تَعَالٰی عَلَیْہِ وَاٰلِہٖ وَسَلَّمَ a unique revolution took place in the whole world and the sorrows and difficulties of helpless and powerless women were overcome. When our Beloved Rasool صَلَّی اللہُ تَعَالٰی عَلَیْہِ وَاٰلِہٖ وَسَلَّمَcame to this world with the religion ‘Islam’ from Allah عَزَّوَجَلَّ , fortune smiled on the miserable women. Thanks to Islam, the status of women, who were the victim of cruel men, have been elevated so much that they have not only got great status in acts of worship and other matters, but they have also got great status in every stage of life and death and in every situation. Like the rights of men, women rights were also established. Allah عَزَّوَجَلَّ sent His commandments for the protection of women rights. Muslim women got the rights of ownership; they became the owner of the money of their Mahr, trade, and their properties. Islamic women were declared the heirs in the inheritance of their parents, brothers, sisters, husband and sons. In short, the women who were extremely helpless and powerless, humiliated and disrespected and had no status in the eyes of men became the peace of the heart of men and the queen of their homes. The Holy Al Quran has declared in clear words:

He created spouses for you from yourselves for you to gain rest from them, and kept love and mercy between yourselves.

Status of daughter in pre-Islamic Era

Before Islam, girls [daughters] were treated worse than animals; sometimes they were buried alive as soon as they were born because in that barbaric society, the birth of a daughter was considered to be a cause of embarrassment. At times, when someone would find out that a baby girl had been born at his home, he would not face people for many days contemplating what he should do in this matter. Should I bear the disgrace and bring up the daughter or should I bury her alive to save myself from the embarrassment? It is stated in the 58th and 59th Ayah of Surah An Nahl, part 14:

And when one of them receives the glad tidings of a daughter, his face turns black for the day, and he remains seething. Hiding from the people because of the evil of the tidings, ‘Will he keep her with disgrace, or bury her beneath the earth? Very evil is the judgement they impose!

Status of mother in Islam

Woman in the form of mother is the great personage whose presence brings about blessing, who is the beauty of home and peace of the home is established because of her. If she is seen with love, the reward of one accepted Hajj is obtained. Serving her brings about the pleasure of Allahعَزَّوَجَلَّ without her, the home seems deserted. She has given birth to the great personages like blessed Ambiya عَلَیْہِمُ الصَّلَاۃُ وَالسَّلَام Companionsرَضِیَ اللہُ تَعَالٰی عَنْہُم and pious predecessors رَحمَہُمُ اللہُ الباری . There is no limit of the favours of mother; mother remains patient on difficulties; mother sacrifices her desires for the sake of her children’s desires; mother undergoes the hardship of giving upbringing to children, pregnancy, delivery, childbirth, breastfeeding and waking up at nights. Mother herself sleeps hungry, but does not let her children sleep hungry. In short, a mother bears everything for the sake of her child, but unfortunately in return she only gets pain and troubles. The rights of mother have been violated and injustice has been done to her in every phase of life especially in the old age. The kind of treatment she receives in the old age cannot even be imagined and makes our hair stand on end. So it is Islam which first of all talked about the status of women and told the whole world that mother is the respectable personage whose rights have to be fulfilled. The pleasure of Allah عَزَّوَجَلَّ is concealed in the pleasure of mother.

No matter how high the post or status a person attains, he is not free from the obedience to mother.

Status of wife in Islam

Before Islam wife was also kept as mortgage for money/possessions like animals and other goods.

These unfortunate women were in great trouble due to their powerlessness and no society and civilization solved their problems. But then the religion Islam came with the arrival of the Beloved Rasool صَلَّی اللہُ تَعَالٰی عَلَیْہِ وَاٰلِہٖ وَسَلَّمَwhich not only has brought salvation to them from the cruelty and injustice, but it has also established women rights upon men. It is Islam that has declared the relationship, which is established between man and woman through Nikah, the protector of the half faith of man. It is Islam that has given the ownership of the Haq-Mahr given to them by their husbands and the inheritance of their husband in case of being a widow. Islam has not only discouraged the thought ‘for husband, wife is a disrespectable being’, but rather Allah عَزَّوَجَلَّ has said that wives are the source of husbands’ comfort and peace.

And deal with them kindly.

Islam has declared the person best who treats his wife well. The Beloved Rasoolصَلَّی اللہُ تَعَالٰی عَلَیْہِ وَاٰلِہٖ وَسَلَّمَ said: The best is he who is better for his wife and I am better than all of you for my wife.

Really a Nice Article. Its Really Important To Highlight The Respect Which Has Been Given By Islam to Islamic Women. Well-Done Keep It Up.