Rights of Women in Islam 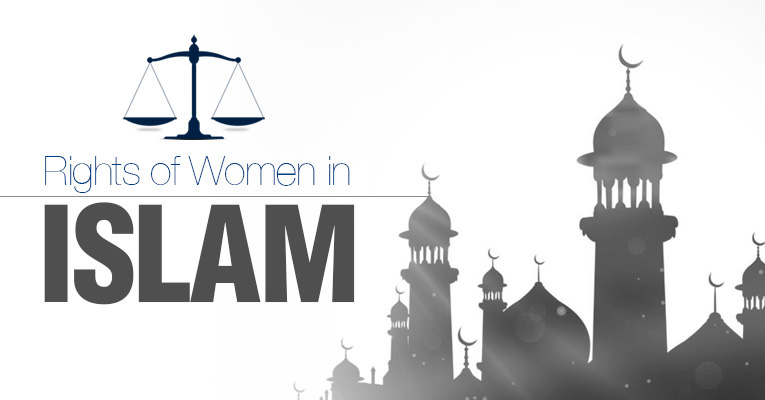 The status and role of women in society are important issues for which Islam has provided all related rules, rights and guidance. In fact, in many ways, Islam is the only religion to do so. Not only in the theory, Islam practically uplifted women status nearly 1400 years ago and for the first time in human history she felt her true being.

When the Holy Quran mentions someone or something, it carries great importance. Given this, we can imagine how important the role, status, and duties of women are that a chapter’s name in the Holy Quran is Surah al Nisa. The general idea among non-Muslims and even among some modern Muslim is that in Islam women are treated as second class citizens. This idea is wrong, and it is based on misconceptions and, to some extent, ignorance. Rather Islam gives respectful status to women. In Islam, a female whether a newborn or a widow, Is not in any way a disgrace either to an individual Muslim man or to Muslim society at large. She cannot be buried alive or burned by the side of her husband. In fact, Islam permits her to remarry, so that she and her children may live under the protection of a legitimate husband/father figure.

Prior to Islam, women had no share in inheritance; in fact, in many cases, she herself was a part of the property to be inherited. Islam gave her a status in society and elevated her being a number of times over. Regarding inheritance, some argue that since her share is less than that of a men.i.e, typically half that of a male standing in the same degree of relationships to the deceased, this makes her Inferior. In fact in Islam a woman has no financial obligations towards her family the economic responsibility always lays solely upon the man. So the difference in shares does not mean that one gender is preferred over the other. It represents a just balance between the roles and responsibilities of family members according to their natural, physical and emotional makeup. It is Islam to have in place protective measures for women to safeguard their dignity and chastity , especially if they have no one else to stand up for them. Allah clearly outlines severe punishment for those who mistreat women and behave unfairly with them.

Historically, divorced women were considered disgraced beings in their communities, and many times ex-husband and other relatives prevented them from remarrying. Islam removed such obstacles by permitting women to remarry and by commanding others to let them do so.

Women, regardless of their religious or other affiliations, have four major roles to play in life: mothers, wives, sisters and daughters. Women as mothers are respected throughout the world, and every society attaches a near holy status to her. Islam grants women the highest place in society in their role as mothers. With regards to her children, the status of a mother is exalted three times over the status of a father. No matter how much a mother I served, it is said that no child can ever be grateful enough for even the one day of pain she endured while giving birth and in caring for her child during infancy and thereafter. A widely known Hadith states that

"heaven is at the mother's feet ".
The pleasure of Allah عَزَّ وَجَلَّ is concealed in the pleasure of mother. No matter how high the post or status a person attains, he is not free from the obedience to mother.

As a sister, a woman is not neglected in Islamic Culture . If she is the eldest among the siblings, she takes the place next to her mother and draws the same respect. The way Islam has mentioned the rights of mothers ; similarly Islam has also highlighted the rights of real sister and has given the order to treat real sister and foster sister well. Beloved Rasool صَلَّی اللہُ عَلَیْہِ وَسَلَّمَ welcomed and respected his foster sister to show the status of Sisters In Islam .

As a daughter, a woman is a blessing and a means of the mercy of Allah عَزَّ وَجَلَّ. There are many special rewards for the one who look afters daughters as it is narrated:

Some misguided people may feel down at the news of the birth of a daughter, this is not the case in most Muslim families. Even if such feelings appear, they fade away quickly, and daughters become dearer to the parents and to the family. Daughters are always helpful to mothers in carrying out house chores and bring warmth to fathers. Islam gives a great Importance to education, not only for men but also for women. It is incumbent on parents to educate their children in the best Islamic spirit . It is much more important for parents fully to train their daughters to perform well in their married life. Some people in the society think that Islam does not give the right of education to women due to their misconception and the reality is that Islam orders the women to get education.

The most important role of a woman in society, as well as in Islam is that of a wife. It is in this role that most of the questions about her status, treatment, rights, and duties arise. It is here that women may be mistreated and suppressed by husbands who are violating Islamic rules out of their own ignorance, and it is here that some Muslim women may feel insecure and unhappy because of the non Islamic behavior of their husbands. However it is usually the case that in a Muslim marriage the wife can and does bring abundant happiness by becoming the queen and ruling over the heart of her husband, the king of family. This is where she creates heaven on earth for herself and her family. Islam has declared the relationship, which is established between man and woman through Nikah, the protector of the half faith of man. Islam has given the ownership of the Haq-Mahr given to women by their husbands and the inheritance of their husband in case of being a widow. Islam has not only discouraged the thought ‘for husband, wife is disrespect able being’, but rather Allah عَزَّ وَجَلَّ has said that:

Islam has declared the person best who treats his wife well. The Beloved Prophet صَلَّی اللہُ عَلَیْہِ وَسَلَّمَ said: “The best is he who is better for his wife and I am better than all of you for my wife”.

A husband must provide respect, dignity, security, shelter and appropriate provisions of life to his wife. During the absence of her husband, a wife is required to protect her chastity, her dignity and her family's property. In Islam, a wife's proper place is usually at home. However, for the greater good of the family, to help her husband, to share the burden of the household, or for other chores of the family life, or to pursue an appropriate occupation or profession, she is allowed to come outside, provided that she guards her chastity, respect, and dignity. Women are required by Allah to cover their body and wear proper Islamic veil when in public. If one pays close attention and sincerely explores the consequences of immodesty and obscenity, one will reach the conclusion that eventually, in one way or another, immodesty and obscenity brings disastrous results to society and irreversible damage to the dignity of men and women.

Islam is the religion which for the very first time in the world has consoled and comforted miserable women. It has become affectionate to them. Instead of leaving them being oppressed Islam has made them the respectable member of the society. In short, Islam has closed the chapter of cruelties and injustice being done to women forever and has given them all the permissible rights which they deserve. Undoubtedly, it is such a great favor of Islam for women that humanity will remain proud of it until the Judgement Day.