Little Zayd’s face was beaming as he returned from school. Standing at the side of their house, Mother and Grandmother were inviting people to Little Zayd’s recital at school where he will perform a naat. Sab se awla aw A’la hamara Nabi, Ankhon ka Tara Nam-e-Muhammad, all the favourite naat were echoing in Little Zayd’s mind.  Finally, the idea settled in his mind that like before, he would consult his older sister.

After hearing Little Zayd speak, his sister went into deep thought for a short while.  Then after some moments she said, “Nowadays there is a new naat on Madani Channel. Alongside being easy, it has a nice melody.  I will write it down for you this evening and help you practice it three or four times at home before the literary assembly.” Thanking his sister, Little Zayd went to the fridge thinking, “All the tension has gone, so why not rest and enjoy some chocolate?”

Even before the recital began, all the children were in rows in the assembly hall. At the appointed time, a student from class 9 started the recital with the noble Quran after which Little Zayd came to the stage to recite naat. He started reciting:

Wave upon wave of مَاشَــآءَالـلّٰـه echoed through the hall as Little Zayd finished. It was now time for the speech, and brother Ghulam Rasul from class 10 came to the stage. Allah Almighty had gifted him with orating skills, and he had won first prize in the speaking competition between all the schools in the city.  The children appeared happy to see him on the stage, and silence had spread in the hall.

“First of all, respected teachers and dear colleagues, السلام علیکم ورحمۃ الله! Islam is filled with heroic men and women of Allah whose biographies can fill entire libraries. I want to speak about one of these great pious personalities before you today who was so pious in his childhood that an entire band of thieves repented because of his boldness.”

Ghulam Rasul stopped and looked at the interested faces in front of him. “Yes," he said, "I am speaking about the person you are thinking about:  his eminence, ʿAbd al-Qādir al-Jīlānī رَحْمَةُ الـلّٰـهِ عَلَيْه . Dear children! Shaykh ʿAbd al-Qādir al-Jīlānī رَحْمَةُ الـلّٰـهِ عَلَيْه had an intense love for prayer. For 40 years, he prayed Fajr with the wudu of Isha. In other words, he would not sleep after Isha prayer but spend the night worshipping Allah Almighty until Fajr.

Dear children! We claim that we love the pious people of Allah Almighty, but have we ever contemplated whether we are also following their way of life? Let alone worshipping all night; we do not even pray Fajr. Sometimes, the excuse of our eyes not opening is given and sometimes that of sleep.  Even if our parents wake us up, we change sides and go back to sleep.  But when it comes to school time, our sleep departs, and upon our parents’ one call, we dash from our bed as though thorns have sprouted from it.”  Upon hearing this, smiles appeared on the faces of the teachers as well as the students.

Ghulam Rasul continued: “Nowadays, if a person is deemed a hero, he is also emulated.  Worldly people have their own status, but for us believers, the greatest heroes are the pious friends of Allah Almighty, like Shaykh ʿAbd al-Qādir al-Jīlānī رَحْمَةُ الـلّٰـهِ عَلَيْه .  If we want to make our lives and Hereafter joyful, we will have to emulate them. Only then will these pious servants of Allah Almighty take us into Paradise with them.

Little Zayd’s face was beaming as he returned from school. Standing at the side of their house, Mother and Grandmother

Ever since Rabi al-Awwal began, Little Zayd’s happiness was a sight to behold. After all, the days of receiving precious gifts 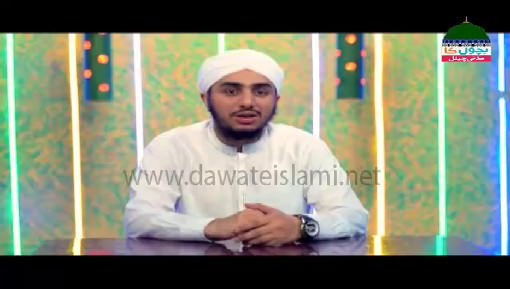