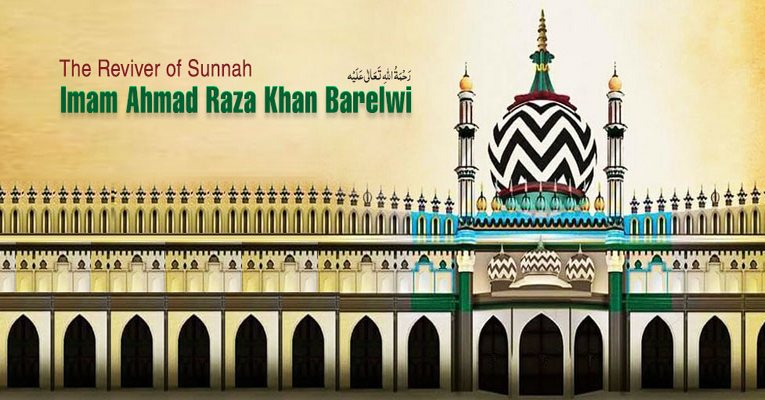 “Allah will raise for this Ummah at the end of every hundred years the one who will renovate its religion for it.”

In the explanation of this Hadith, the commentators point that renovating the religion means to revive those teachings of Quran and Sunnah that are being destroyed and to command according to Quran and Sunnah. Moreover, separating Sunnah from Bid’ah and debasing the status of Ahl -ul- Bid’ah.

Today, we are going to talk about such a visionary reviver of Islam and Sunnah who, in a time when the core beliefs of unsuspecting Muslims were being targeted by blasphemers and false claimants of Prophethood, made it his life mission to expose them and to defend the honor of the Holy Prophet Muhammad صَلَّی اللہُ تَعَالٰی عَلَیْہِ وَاٰلِہٖ وَسَلَّمَ . The devotees of the Holy Prophet صَلَّی اللہُ تَعَالٰی عَلَیْہِ وَاٰلِہٖ وَسَلَّمَ refer to him with the title of A’la Hazrat and his name is Ahmad Raza Khan Barelwi رَحْمَۃُ اللہِ تَعَالٰی عَلَیْہِ .

A’la Hazrat Imam of Ahl-us-Sunnah, Reviver of Sunnah, Eradicator of Bid’ah, Scholar of Shariah, Guide of Tariqah Allama Maulana Al-Haaj Al-Hafiz Al-Qari Shah Imam Ahmad Raza Khan رَحْمَۃُ اللہِ تَعَالٰی عَلَیْہِ was born on Saturday, 10thShawwal, 1272 AH (14th June, 1856) at the time of Zohr in Bareilly, India. His father, Maulana Naqi Ali Khan and his grand-father, Maulana Raza Ali Khan were both prominent Islamic scholars of their time with critically acclaimed academic achievements. His intelligence and acumen has become apparent from a very early age. He gave a 2 hour lecture on the topic of Mawlid (Birth of Rasoolullah صَلَّی اللہُ تَعَالٰی عَلَیْہِ وَاٰلِہٖ وَسَلَّمَ ) at the age of 6 which left the audience awestruck. During his studies, he never felt the need to study more than 4 books from any teacher. He would study the remaining books on the course by himself and would ask his teachers to quiz him on them. Ever since he was a little child, he adopted piety to such an extent that the sound of his footsteps could not be heard whilst walking. At the age of 6, he came to know about the direction of Baghdad (the holy city of Ghaus -ul- Azam رَحْمَۃُ اللہِ تَعَالٰی عَلَیْہِ). He then never stretched his legs in that direction out of respect. He was always extremely enthusiastic about Salah and would offer the daily five prayers in Masjid. A story from his childhood is worth mentioning here: Imam Ahmad Raza Khan started observing the fasts of Ramadan from the age of 7. He was fasting on a scorching hot summer day in the summer of India which tends to get very hot but the heat was particularly intense that day. Imam Ahmad Raza Khan’s father brought him to a room where some food was kept. He closed the door and asked A’la Hazrat to have at it. A’la Hazrat replied that he was fasting. His father told him that children’s fasts were like this and he should eat as no one is looking. A’la Hazrat replied, “(Allah) for whom I am fasting is watching me.” Listening to this reply, his father Allama Maulana Naqi Ali Khan broke into tears and left the room with A’la Hazrat.

Imam Ahmad Raza Khan رَحْمَۃُ اللہِ تَعَالٰی عَلَیْہِ completed his Islamic education under the guidance of his father Maulana Naqi Ali Khan and gave his first Fatwa on the issue of milk-kinship at the age of 13 years and 10 months. He went on to answer hundreds of thousands of queries throughout his life on a variety of topics ranging from war to business and from religion to sciences but unfortunately, not all of them could be recorded. Those which were recorded have been compiled under the title “Al-Ataya Al-Nabawiyyah Fil Fatawa Al-Razawiyyah” which consists of 30 volumes, 21,656 pages, 6,847 question-answers and 206 booklets. Imam Ahmad Raza Khan wrote around 1,000 books on different topics. His vast knowledge of Quran, Ahadith, Fiqh, Mantiq (logic) etc. can easily be understood by studying his Fatawa. He was well versed in more than a hundred branches of knowledge and wrote books on many of them. His Urdu translation of the Holy Quran Pak Kanz -ul- Iman is regarded as the best and the most superior Urdu translation of the present era. He is regarded as the Mujaddid (Reviver) of the 14th Islamic century.

Imam Ahmad Raza Khan got married at the age of 18 in 1874 AD. He was blessed with 7 children; 2 sons and 5 daughters. A’la Hazrat performed pilgrimage twice in his life. Imam Ahmad Raza Khan رَحْمَۃُ اللہِ تَعَالٰی عَلَیْہِ passed away on 25th Safar -ul- Muzaffar 1340 AH (28th October, 1921) on Friday at 2:38pm right at the time of Jumma Azan. To this day, his blessed shrine is the focal point for visitors from all around the world in Bareilly.

May Almighty Allah shower countless blessings upon his blessed shrine, further elevate his ranks and forgive us without accountability for his sake!

Many thanks, A good amount of forum posts!