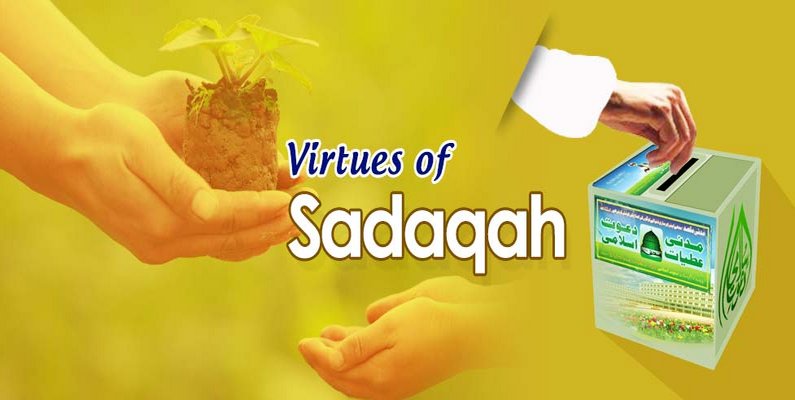 From this definition of Sadaqah, we have come to know that real Sadaqah is free from any kind of showing off and desires for respect and praises from the people, it is only done for the pleasure of Allah عَزَّوَجَلَّ and for attaining rewards from Allah عَزَّوَجَلَّ. There is another thing to remember, some people are of this opinion that they should give away worn out items or things of no use as their Sadaqah; this is incorrect and the opposite is true, people should give those possessions in Sadaqah for the pleasure of Allah عَزَّوَجَلَّ which are excellent, best and most-liked, as it is mentioned in Blessed Al Quran:

Translation from Kanz-ul-Iman: You shall never attain virtue until you spend in Allah’s cause the things you love; and Allah is Aware of whatever you spend.

Commenting on the abovementioned verse, Sadr-ul-Afadil, ‘Allamah Maulana Sayyid Muhammad Na’eemuddin Muradabadi عَـلَيْهِ رَحۡمَةُ الـلّٰـهِ الۡـهَادِی has stated: Sayyiduna Ibn ‘Umar رَضِیَ الـلّٰـهُ تَعَالٰی عَـنْهُمَا said, ‘Spending here refers to general and common spending, all Sadaqaat, regardless of whether they are obligatory or supererogatory are included. It is a saying of Hasan that the wealth & possession which is most-liked in the eyes of Muslims , should be spent in the way of Allah عَزَّوَجَلَّ for attaining His Divine pleasure as the blessed verse refers to this possession even if it is only a date.

Sayyiduna ‘Umar Bin ‘Abdul ‘Aziz رَحْمَةُ اللهِ تَعَالٰی عَلَيْه used to purchase sacks of sugar to give in Sadaqah. He was asked, ‘Why do not you give its price in Sadaqah’. He replied, ‘I love Sugar; so I want to spend the thing most liked to me in the way of Allah عَزَّوَجَلَّ.’

Allah عَزَّوَجَلَّ Himself is persuading and motivating us to spend the things we like most in His عَزَّوَجَلَّ way. Therefore, with good intentions we should generously give Sadaqah & Khayraat instead of being stingy. As we all know that whatever we possess, is given to us by Allah عَزَّوَجَلَّ. So spending what He عَزَّوَجَلَّ has given us will surely increase His blessings upon us; and on the contrary, despite having the ability, if we do not give Sadaqah & Khayraat, this could be a cause of depriving us of blessings.

Sayyidatuna ‘Asmaa Bint Abu Bakr رَضِیَ الـلّٰـهُ تَعَالٰی عَـنْهُمَا has narrated that the Revered and Renowned The Prophet Muhammad صَلَّى اللهُ تَعَالٰى عَلَيْهِ وَاٰلِهٖ وَسَلَّم said to me, ‘Do not withhold your money, for if you did so Allah عَزَّوَجَلَّ would withhold His blessings from you.’

Remember! As spending in the way of Allah عَزَّوَجَلَّ is beneficial to one’s self, similarly being stingy is also harmful to one’s self. Allah عَزَّوَجَلَّ chooses His generous bondsmen to do good deeds. Those who are exceedingly generous and give Sadaqah & Khayraat with incredible generosity, despite spending a lot, their possessions are surprisingly multiplied; and on the other hand, a miser, especially one who has much wealth feels that if he gives Sadaqah and Khayraat then his wealth will decrease, this mentality prevents him from discharging his obligatory & supererogatory Sadaqah, other virtuous acts or helping the creation of Allah عَزَّوَجَلَّ after all, he forgets that one day the angel of death approaches and his possessions will transfer into the hands of his heirs.

Sayyiduna Yazīd Bin Maysarah رَحْمَةُ اللهِ تَعَالٰی عَلَيْه has stated: In some ancient Ummah (nation), there was a rich and stingy person who had an abundance of wealth and many children. He who would not spend anything in the path of Allah عَزَّوَجَلَّ but would rather continue multiplying and accumulating his wealth. A number of slaves would always remain ready to receive his orders. Days and nights of that unwise and greedy person were passing in luxury, fun and complete heedlessness with his family, forgetting the reality of death. Once, Sayyiduna ‘Izraeel عَـلَيْـهِ الـصَّلٰوة ُ وَالـسَّلَام appeared as a beggar, knocked at his door. One of his slaves opened the door and saw a beggar standing outside. The slave asked the reason for his coming. Sayyiduna ‘Izraeel عَـلَيْـهِ الـصَّلٰوة ُ وَالـسَّلَام replied, ‘Go and send your master to me, I have to talk to him.’ The slave lied, ‘He has gone out to help a beggar like you.’

The beggar went away. After some time, there was another knock at the door. The slave opened the door and found the same beggar again. This time Sayyiduna ‘Izraeel عَـلَيْـهِ الـصَّلٰوة ُ وَالـسَّلَام said, ‘Go and tell your master that I am the angel of death.’ Intoxicated by wealth and heedless of Divine remembrance, when that rich man was informed about it; he began to tremble with fear and said to his slaves, ‘Go and treat him in a very polite and humble way.’ The slaves came out and humbly requested him, ‘Please spare our master and seize the soul of somebody else’. Sayyiduna Malak-ul-Maut عَـلَيْـهِ الـصَّلٰوة ُ وَالـسَّلَام said, ‘That is not possible.’ He then said to the rich man, ‘Make your will if you want, I will not go without seizing your soul.’ Listening to this, the rich man and his family yelled out. The wealthy person asked his family members and slaves to bring the boxes of gold and silver and opened them. Instantly they carried out his order. There was a stockpile of treasure that he had accumulated throughout his life. Turning towards the treasure, he then said, ‘O despicable and contemptible treasure! Curse be upon you! I am doomed due to your love. Alas! I remained heedless of the Zikr of Allah عَزَّوَجَلَّ and the afterlife just because of you.’

Suddenly, a voice came out from the stockpile of treasure, ‘O lover of wealth, O seeker of the world and heedless one! Why do you curse me? Were you not despicable in the eyes of the worldly people! It is me that gave you respect, enabling you to have access to the royal court. You married a rich woman by virtue of me. You yourself wasted me on evil things. If you had spent me in the path of Allah عَزَّوَجَلَّ you would not have been faced with this humiliation and disgrace. Tell me! Did I prevent you from spending me in virtuous things? Not at all! You alone are responsible for all the great calamity that you are facing.’ Thereafter, the angel of death seized the soul of that stingy rich person.

Three very important facts should be kept in mind when giving Sadaqah i.e. spending in the path of Allah عَزَّوَجَلَّ :

1. Do not disclose or boast of your favours after giving Sadaqah. 2. Not to hurt the feelings of those whom you have assisted by taunting them
3. 3. Sadaqah should be given sincerely, solely for the pleasure of Allah عَزَّوَجَلَّ .

For those who hurt Muslims by taunting, injuring their feelings by disclosing their favours and for those who have indulged in showing off & ostentation, they should remember the abovementioned three sayings whenever they are blessed with the opportunity of giving Sadaqah (charity), unless they are counted amongst those destitute people who will appear on the Day of Resurrection with loads of virtues but would end up with nothing.

Those who carry out the virtuous deed of giving charity sincerely in the way of Allah عَزَّوَجَلَّ Allah عَزَّوَجَلَّ blesses them double (according to one’s sincerity) and even more than that. What we spend in the way of Allah عَزَّوَجَلَّ as Sadaqah is in fact profitable wealth and whatever we possess will go into the hands of others as soon as we die. Wise people are only those who serve those who are genuinely poor, especially Deeni students, but without reminding & boasting of their favours and thus they become deserving of virtues and excellences as mentioned in the blessed Quran & Ahadees . Allah عَزَّوَجَلَّhas a great reward for those who give Sadaqah and according to a blessed Hadis, the one who gives Sadaqah will not only remain safe from the heat of the grave but will also be under the shade of his Sadaqah. By the blessings of Sadaqah, misdeeds and calamities are removed; it is a source of increasing one’s age; it wards off the bad habit of arrogance; it gives protection from a bad end. Sadaqah becomes a barrier between Hell and a human and that fortunate person is privileged with salvation from Divine wrath .