How to Stay Safe from Difficulties? 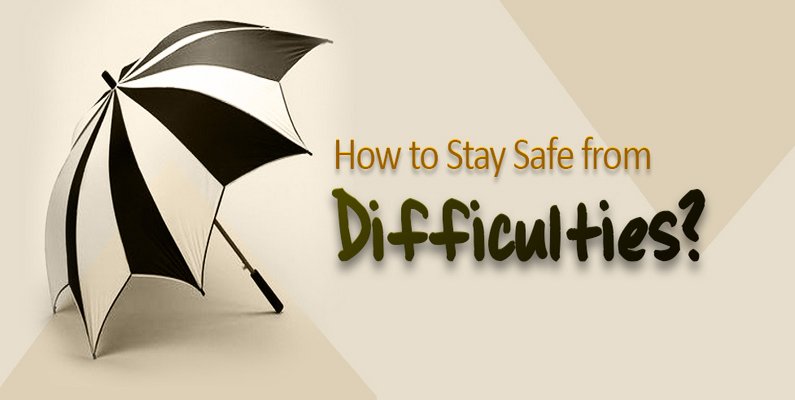 How to Stay Safe from Difficulties?

Our society is surrounded by different illnesses and difficulties. People are suffering from unknown diseases which remain uncured even after being treated by expert doctors and herbalists. Frequent domestic rows have shattered peace in homes. Even qualified people are unemployed, miserably seeking jobs at different firms. Poverty is on the rise. Creditors are crying out for the recovery of their money. Debtors are burdened with heavy debts. Evils and new crimes are also on the rise. Indeed all this is the consequence of our bad deeds.

Difficulties and diseases are a part of one’s life. Therefore, instead of complaining about them and falling into the pit of disappointment, one should perform good deeds with sincerity, refrain from sins and get into the habit of doing the deed that protects against troubles, i.e. one should give Sadaqah.

Not only is the Sadaqah-giving person protected against calamities, he is also blessed by Allah عَزَّوَجَلَّ with other benefits.

Giving Sadaqah and helping the poor are liked by Allah عَزَّوَجَلَّ very much. If a Muslim pleases the hearts of the poor by sincerely giving them Sadaqah and charity, so the Lord عَزَّوَجَلَّ Who bestows respect upon bondmen does not let him lose respect in front of anyone despite poverty. The Lord عَزَّوَجَلَّbestows upon him even more than his expectation, as is just mentioned in the parable. Despite being a needy person, Sayyiduna Abu Muslim Kholaaniرَحْمَةُ اللهِ تَعَالٰی عَلَيْه gave the amount of flour in the Divine path in Sadaqah which was accepted by Allah عَزَّوَجَلَّ Who turned wood dust and soil into good quality flour. In this way he and his family members were blessed with fresh loaves of bread. Therefore, while giving Sadaqah and charity, we should not also have such thoughts as ‘our money will decrease or what will we eat? Or we need money for such-and-such piece of work, etc.

Zakah, Sadaqah and charity are financial forms of worship. Allah عَزَّوَجَلَّenables those people to perform these forms of worship who have the passion to fulfil the needs of the poor and the needy. The people, who do not pay their Zakah and remain busy satisfying their needs and increasing their bank balance, perhaps feel that the way they are satisfied, in the same way the others will be too. Stinginess is a very dangerous disease.

Remember! Apparently, it seems to us that our money will decrease but in fact it will increase and we will be blessed with many benefits in the worldly life as well as in the afterlife. If we do not give Sadaqah fearing decrease in our wealth, it may remove blessings from our sustenance and may cause poverty.

Sayyidatuna Asma رَضِیَ اللهُ تَعَالٰی عَنْهَا has stated that the Holy Nabi صَلَّى اللهُ تَعَالٰى عَلَيْهِ وَاٰلِهٖ وَسَلَّم said to her, ‘Do not stop giving Sadaqah and charity in case your sustenance gets stopped.

The Holy Rasool صَلَّى اللهُ تَعَالٰى عَلَيْهِ وَاٰلِهٖ وَسَلَّم has said: Whoever gives Sadaqah for the pleasure of Allah عَزَّوَجَلَّ that Sadaqah becomes a shield between him and fire.

Hakeem-ul-Ummat, Mufti Ahmad Yar Khan Na’eemi رَحْمَةُ اللهِ تَعَالٰی عَلَيْه has stated: A generous person, giving Sadaqah and charity, leads a happy life and does not usually suffer from any worldly trouble. If he ever faces tests and trials, Allah عَزَّوَجَلَّ blesses him with peace in his heart which helps him to have patience and earns him reward.

Sadaqah closes the doors of evils;

Sadaqah extinguishes the wrath of Allah عَزَّوَجَلَّ; Sadaqah provides cure for diseases; Sadaqah is a means of protection from accidents; Sadaqah increases good deeds and wards off bad death. But regretfully! Despite hearing so many narrations in excellence of Sadaqah, we hesitate to spend our money on good acts. Perhaps this is the reason why each of us suffers from any type of trouble. Someone is facing domestic and family feud, while someone is stuck in social and financial problems.

We should develop the habit of giving as much Sadaqah and charity as possible for the pleasure of Allah عَزَّوَجَلَّ. We should also have perfect trust in Allah عَزَّوَجَلَّ hoping to be blessed with something better in return for our Sadaqah in the worldly life as well as in the afterlife.

Sayyiduna Imam Badruddin ‘Ayni رَحْمَةُ اللهِ تَعَالٰی عَلَيْه has stated: Do not refrain from spending your wealth [in the Divine path] fearing that it will decrease. Otherwise, Allah عَزَّوَجَلَّ will make you suffer financial deficit or will prevent wealth from reaching you and will deprive you of the means of sustenance. The blessed Hadees proves that Sadaqah increases wealth and is a means of blessing and increase in it. On the other hand, if a person is a miser and does not give Sadaqah so Allah عَزَّوَجَلَّ makes him suffer financial deficit and will prevent blessing as well as increase in his wealth.

Sayyiduna Ikrimah رَضِىَ اللهُ تَعَالٰی عَـنْهُ has said: Sayyiduna Ibn ‘Abbas رَضِىَ اللهُ تَعَالٰی عَـنْهُ narrated that the Beloved Rasool Muhammad صَلَّى اللهُ تَعَالٰى عَلَيْهِ وَاٰلِهٖ وَسَلَّم said, ‘A woman was about to eat a morsel. Meanwhile, a beggar asked for a meal. She gave the same morsel to the beggar. After some time, she gave birth to a baby. When her child grew a little older, a wolf took him away. The woman ran after the wolf calling ‘My Son! My Son! Allah عَزَّوَجَلَّ ordered an angel to go after the wolf and snatch the child from the wolf (and hand him over to his mother) and say to her that ‘Allah عَزَّوَجَلَّ has sent Salam to you and said that this morsel is in return for your morsel.

There is another important point to be kept in mind. If a Muslim has been suffering from diseases for a long period of time or he has been in huge debts for many years or he often suffers loss in his business or any of his close relatives has died, Satan exploits the situation and whispers to us on these occasions. Satan may make us have the bad assumption about him, making us think that so-and-so person is suffering loss simply because he is a miser and does not give Sadaqah and charity. He feels uneasy and uncomfortable when it comes to spending in the Divine path. He even dislikes it.

We should also develop the mindset of remaining pleased with the Will of Allah عَزَّوَجَلَّ instead of complaining impatiently about the trouble, problem, illness and difficulty we ever face. For the solution of our problems and for protection from calamities, we should get into the habit of giving Sadaqah and charity in abundance for the pleasure of the Almighty. However, at the same time, we should also be careful that our Sadaqat do not go to any undeserving person. It’s a sad fact that there are a huge number of habitual beggars and so-called Faqeers i.e. destitute people. Instead of doing some work or job, these days, even some healthy people use begging as their means of livelihood.

I am thankful to you as I was looking for the stuff in the English Language.

This is absolutely right that we should give sadaqah before any work.