Questions and Answers from Madani Muzakarah

Q: Can I perform Hajj? (Asked by a young girl).

A: Yes, children can perform Hajj. There is even a specific chapter in Rafiq al-Haramayn which discusses the Hajj of children. Anyone taking children with them to perform Hajj should read the details mentioned in this chapter. It will prove useful اِنْ شَــآءَالـلّٰـه.[1]

Implications of performing Hajj in childhood

Q: If somebody performed Hajj before puberty, but as an adult is financially capable of performing Hajj on his own accord, will he have to perform his obligatory Hajj again, or is the Hajj from his childhood sufficient?

A: Hajj is not obligatory for minors. However, they shall still be rewarded if they perform it, as the good deeds of a child are accepted. Bearing this in mind, Hajj performed before the age of puberty does not fulfil the responsibility of the obligatory Hajj. After becoming an adult, if such a person is financially capable and also fulfils the other conditions of Hajj, the obligatory Hajj must be performed.[2] Hajj is obligatory once in a lifetime.[3]  Some individuals consider having a continuous income from a job to be a condition for Hajj to be obligatory, but this is incorrect.[4]

A verse of poetry

You called us safely under your shade,

A: Previously, people would travel to Madina on camels and horses. Sometimes, highway bandits would loot these caravans. During this time, Imam Ahmad Raza Khan رَحْمَةُ الـلّٰـهِ عَـلَيْـه intended to travel to Madina on a camel. Some people urged him to forego the idea, reminding him of the potential danger. Unswayed, he travelled by camel and reached Madina without any problems. Perhaps the couplet is a reference to this.

It is as though the great Imam is saying that the Messenger of Allah صَلَّى الـلّٰـهُ عَلَيْهِ وَاٰلِهٖ وَسَلَّم has called us safely under his protection and honoured us with the ability to present ourselves in Madina. Those who do not travel to Madina instead show small-mindedness, and the path seems scary to them. The great Imam is informing us that those who rely upon Allah Almighty and summon up courage are not in danger from anything. To this end, this couplet has elements of reassurance.[6]

Q: If certain animals, vegetables, or other foods are found to naturally have the name of Allah Almighty or the name of the Messenger of Allah صَلَّى الـلّٰـهُ عَلَيْهِ وَاٰلِهٖ وَسَلَّم on them, what should we do? Can we slaughter such an animal or cut such a food?

A: These names do not commonly appear on these things. However, when they do, people go to see them out of reverence. Typically, no-one eats them, and instead post pictures of them to social media. However, there is no issue with consuming such edibles. For example, if a tomato or vegetable is found to naturally bear a sacred name, it can still be eaten. If it is on a goat or animal, it can be slaughtered without issue.

The piece of skin which truly carries a sacred name and was preserved should not be disrespected but framed and hung in the home for blessings.

If the name of Allah Almighty and His Messenger صَلَّى الـلّٰـهُ عَلَيْهِ وَاٰلِهٖ وَسَلَّم naturally appear on something, this has its own unique attraction. It increases a person in his faith and love, as he says, “Look, my Lord is true. This name was not written on this skin by a person, but my Lord has written it.” It is possible that a non-Muslim may accept Islam after seeing that these sacred names appeared without human intervention, by the power of Allah Almighty.[7]

Referring to Allah as sakhi

Q: Can we refer to Allah Almighty as sakhi (generous) in our supplications?

A: It is forbidden to refer to Allah Almighty as sakhi. Instead, Allah Almighty should be referred to as Jawwād.[8]  However, we can refer to our beloved master, the Messenger of Allah صَلَّى الـلّٰـهُ عَلَيْهِ وَاٰلِهٖ وَسَلَّم as sakhi.[9]

Lying down on the stomach

A: Lying on the stomach is the way of the people of Hell. (Note: Sayyidunā Abū Dharr رَضِىَ الـلّٰـهُ عَـنْهُ narrates, “I was once lying down on my stomach, when the Messenger of Allah صَلَّى الـلّٰـهُ عَلَيْهِ وَاٰلِهٖ وَسَلَّم passed by me. He struck me with his blessed foot and said, ‘O Jundub! This is the way the people of Hell lie down.’”[10]

After citing this hadith, Mufti Amjad Ali A’zami رَحْمَةُ الـلّٰـهِ عَـلَيْـه explained, "This is the way disbelievers lie down, or the people of Hell will lay in this manner therein.”)[11]

Many people sleep in this manner nowadays. Children who sleep like this should be corrected so that they can develop the habit of sleeping in the correct position. If this is not rectified in childhood, they will develop a habit of sleeping on their stomach, and when they grow older, they will be unable to sleep without adopting this position.[12]

Q: Are we able to feed meat to birds as charity?

A: Some people feed meat to kites and crows as a charitable act. They circle the morsels of meat around the bird’s head beforehand; this is the way of the non-Muslims. (Note: Read ahead a question that was posed to Imam Ahmad Raza Khan رَحْمَةُ الـلّٰـهِ عَـلَيْـه in relation to feeding birds, and the response he gave. Question: “Some people buy a goat and slaughter it in the name of their son or daughter. They then feed its meat to kites and crows and distribute some of it to the poor. To what extent is this practice correct?” In reply, the Imam said, “This meat should be given to the poor, as giving it to birds serves no purpose. This is open transgression, and serving crows in this manner is a tradition of Hindus.”)[13]

A: If you wish to recite the entire Quran every day, you can do so. However, it is written in Shajarah Qadiriyyah

The hadith describe how the beloved Prophet صَلَّى الـلّٰـهُ عَلَيْهِ وَاٰلِهٖ وَسَلَّم made his accompanying jinn become a Muslim.

A: “The two” as mentioned in the first line of poetry, is a reference to our masters Ḥasan and Ḥusayn رَضِیَ الـلّٰـهُ عَنْهُمَا .

A: There is no problem in using qurbani meat for khichra which is prepared as niyaz. The khichra

A: Yes, children can perform Hajj. There is even a specific chapter in Rafiq al-Haramayn which discusses the Hajj of children.

Q: Is it necessary to wash the ihram after performing Hajj and Umrah? Some people say that it must be washed

aQ: If, due to certain circumstances, a person cannot offer Eid salah in congregation, is he allowed to pray it alone?

Question: Out of love, people refer to me with names other than my actual name. Is there any prohibition in this?

Answer: A person’s soul does not die at the time of death, rather it leaves the body.

Question: What should children do if they adopt bad conduct with their parents and abandon them,

Question: Can someone refer to their home, shop, car, daughter-in-law, or wife as ‘ill-omened’ and say that they caused loss ever since their arrival? 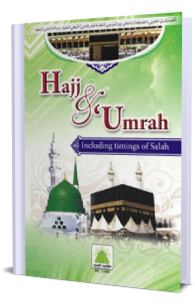 Hajj and Umrah Including Timings of Salah