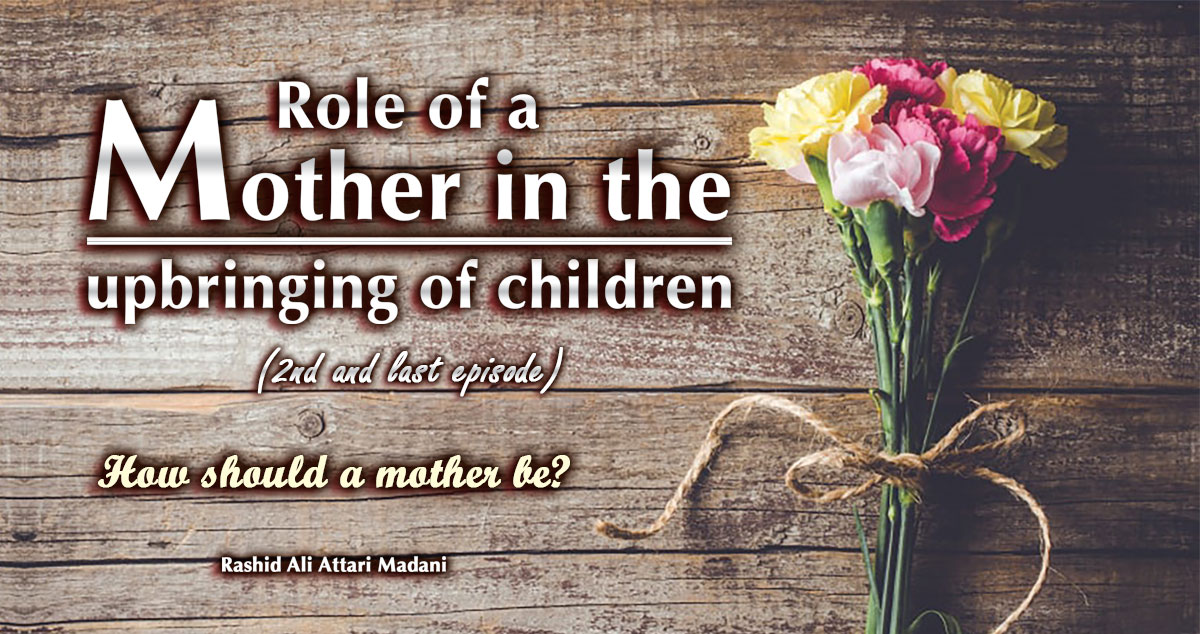 Upbringing of children in their young age

٭ It is necessary for a mother to bring up children in such a manner that they become fond of virtuous deeds and have aversion to evil deeds from their childhood. She should appreciate children if they perform something good, and if they perform something bad, then she should stop them from it in an appropriate manner. If this is not done, then it is possible that the child gets spoiled and does something really bad and harmful when he grows up.

٭ Just like a father, mother is also a role model for her children. Crying need of the time is that mothers themselves act upon the blessed Seerah (biography) of the Sahabiyyat and righteous predecessors and concentrate upon the education and edification of their children so that Sunnahs can prevail in our society. Moreover, a mother should relay the parables of the Holy Rasool صَلَّى اللہُ تَعَالٰى عَلَيْهِ وَاٰلِهٖ وَسَلَّم, blessed companions رَضِىَ الـلّٰـهُ تَعَالٰی عَـنْهُم and righteous predecessors رَحِمَهُمُ الـلّٰـهُ تَـعَالٰی to her children from their childhood so that the devotion of these righteous personalities gets engraved in their hearts from their childhood and they try to adopt their blessed Seerah.

٭ As soon as children come to an age where they can go out of the house on their own, mother should ensure that children know the name of their father, home address and contact number, in case may Allah Almighty forbid, they forget the way or get lost, then it is possible for them to reach home.

٭ When daughter grows up a little, make her wear a scarf. When she grows a bit further, then get a small Burqa’ sewn for her so that she gets used to the Shar’i veil when she grows up.

A mother should try to strengthen the Iman [faith] of the child right from the childhood. She should not make him scared of dogs, cats or genie, ghost; rather, whenever the need arises, she should try to give the child the mindset that son! Allah Almighty likes this action and does not like this action etc. The child will ask that who is Allah Almighty? Then tell the child that the One Who created the entire universe. We all are Allah’s bondmen. This way, the Iman of the child will strengthen.

Make children used to cleanliness from their childhood

Mother should make her child used to cleanliness from his childhood and tell him that Allah Almighty likes those who remain neat and clean. In summer, if possible, give the child bath everyday. If the clothes are dirty, she should change them straightaway. She should not leave the bed impure at all. She should purify it straightaway and specially look after the cleanliness of the children.

Lying in front of children is destructive

Lying is anyway a major sin, but lying in front of children is severely destructive. Those children in front of whom parents lie and if someone comes at the door, they make them say that tell him there is no one at home etc., it is possible that the same children lie to their parents in future.

Do supplicate for your children

Imam Muhammad Bin Isma’eel Bukhari رَحْمَةُ اللّٰہِ تَعَالٰی عَلَيْه became blind in his childhood. He was treated by the acclaimed physicians of the time but the eyesight could not get restored. His mother was a devout woman who would worship abundantly. She supplicated imploringly in the court of Allah Almighty that ‘O Allah Almighty! Restore the eyesight of my son’.

One night, she beheld the Beloved Nabi of Allah عَزَّوَجَلَّ, Sayyiduna Ibraheem عَـلَيْـهِ الـصَّلٰوة ُ وَالـسَّلَام in her dream. He عَـلَيْـهِ الـسَّـلَام said, ‘Allah Almighty has restored the eyesight of your son due to your imploring and seeking of Du’a abundantly.’ When Imam Bukhari رَحْمَةُ اللّٰہِ تَعَالٰی عَلَيْه woke up in the morning, his eyesight had been restored. (Ashi’a-tul-Lam’aat, vol. 1, pp. 10)

Quarrel of children should not reach elders

Children are children. They quarrel while playing and the very next moment, they reconcile with each other. Mother shall not take faults out of the other children while being one sided, rather, she should look at who’s fault it was. Upon the mistake of her own child, she should give him the mindset to apologise to others. Moreover, she should explain him that whenever you commit a mistake, then you should apologise. Those mothers who rebuke other’s child and unjustly turn a blind eye to their own child’s mistake despite the child being wrong, their disputes often reach the elders which leads to a bigger loss.

Mother’s responsibilities in the educational matters

٭ One shall not burden children with one’s own desires. Have a look at their own interest too. If the child is specially inclined towards religious education, then it is a great privilege and a means of goodness of this world and the Hereafter.

Role of mother in the personal life of children

٭ Relationship of a mother and children is distinguished from various aspects. One of them is that there are a lot of things that children talk to mothers about but cannot do so with the father. Therefore, taking advantage from such opportunities, mother should give them the right advice and try to guide them correctly.

٭ Father eventually oversees the matters of sons, but mother should be more aware in relation to the daughters that what kind of girls she has friendship with. It is often seen that the poor parents of the girls having friendship with the girls of fashionable and rich families, face various types of problems.

٭ Most of the times, mothers play a leading role in choosing the marital match for their children. Priority shall not be given to only worldly riches and highly paid jobs; rather, along with good character and a religious family with correct beliefs, consent of the children shall be given the first priority.