The difficulties (faced in) a foreign country 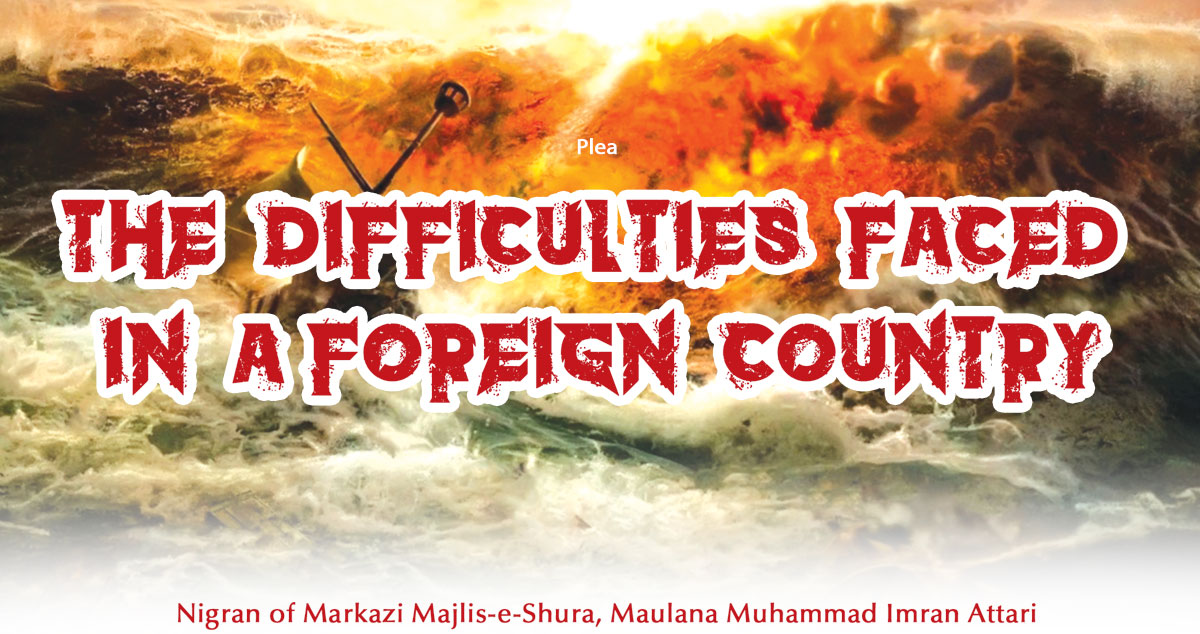 Dear Islamic brothers! The amount of sustenance which is written for us in our destiny, we are to receive, regardless of wherever we may be. One should obtain Halal sustenance through permissible means in one’s own country while relying upon Allah Almighty. Saying that there is no sustenance here, or it does not suffice for us, or thinking of living abroad on the basis of any other worldly purpose is not wise, because usually for the individuals going from here, the money to be attained from overseas cannot serve as a compensation to the religious and worldly worries and problems they are facing. So there are two types of people who go abroad:

The loss of going abroad illegally

§   Bribery is paid for this

§   The risk of losing one’s life and prestige

§   Breaking the laws of both countries

§   Sometimes, an agent, having received some money from them, or taking some advance payment and balance to be paid later on the condition that they arrive in the other country, he would take them through such a route, which consists of a jungle, desert, snowy mountains, river, sea, etc. Such a dangerous journey in which they would have to face misfortunes and dangers, and there being hunger, thirst, cold, abuse from the agent and his representatives, illegally crossing the border, in fear of being a target in the firing line. Due to such illegal travels and then being full of danger, there are a certain amount of people who have lost their limbs i.e. hands and feet, some have lost their lives, and some have gone missing.

§   During an illegal travel similar to this on a snowy route, a person’s hands became crippled. Having gone to the doctors, there was no choice other than to cut the hands. In the end, the person had to have his hand cut off.

§   Somebody became unconscious due to having suffered a head injury, from having been through the danger of a snowy mountain in order to reach his desired country, the rest who were with him left him behind and continued travelling. In the end, due to having stayed in the snow, his foot became useless, which had to be cut off later on.

§   Two real brothers were travelling on a boat, one brother began suffering from a cough which did not seem to stop. The agent said, ‘Silence him, otherwise everybody will be captured by the sea navy officers.’ Stopping the cough was not in that person’s control; ultimately due to the fear of being caught, one brother was pushed in front of the other brother into the sea.

§   Due to the firing at the borderline of a country, a bullet was shot in someone’s leg. That person became crippled from his leg for the rest of his life.

§   A young person was travelling somewhere and was caught at the borderline of the country. He was physically tortured severely, he could not endure wounds and died eight months later.

§   A young person set off on a similar travel; a long period of time had passed and he had not returned; due to whose sadness, his father suffered from a stroke which left him paralyzed.

§   Number of deaths: This act of smuggling people is found everywhere in the world. According to one report in 2017, a total number of immigrants who died was 30,800 whereas, the number of those who were killed while crossing the borders is also in thousands.

The problems after reaching the desired country

Sometimes the agents who take people abroad have a gang of people; the people travelling are consigned with the gang who make them steal and commit robberies. They used to demand further payment by making them ask money from their own family from their country; whoever didn’t ask was dealt with severely in many different ways. For example, branding someone’s body with a hot iron, electrocuting people, slashing people with knives, abusing people with sticks, etc. Even if somebody does find a permissible job in another country, then after completing the work, when one speaks regarding their job or wage, then the employer begins to threaten them that should I call the police? In the end, whatever he receives, he has to take it quietly. At the employees’ meal time, if they had a meat dish, then the Muslims are told, that this meat is of Halal animal and the non-Muslims are given the very same meat dish and are being told that this dish consists of a pig meat, or whichever meat which is lawful in that person’s religion, they name it accordingly.

Son, what are you doing?

A person from abroad contacted one of his family members, when he spoke with his father, the father asked, ‘Son, what are you doing?’ Unwillingly, he replied, ‘Father! I am sweeping up.’ While saying this, the call was cut off. He contacted him again but he came to know that while his father had heard this, he had a heart attack, and passed away at that very moment. Other than all of these worldly trials, especially such countries where immodesty, obscenity, and vulgarity are common, there are many such matters due to which the Iman (faith) of a Muslim remains in danger.

It is my plea to all the devotees of Rasool who are struggling with less sustenance that instead of going abroad, they work hard while staying in their own country, if necessary go to the big cities of one’s own country, and settle on whatever Halal sustenance one receives. اِنْ شَـآءَاللہ  عَزَّوَجَلَّ, you will remain happy.