Learn Why You Should Prioritise the Hereafter

A scholar once visited a businessman for a donation towards religious works. The businessman declined and then took out some pills, taking one with some water. The scholar asked if he is unwell. The businessman explained that ‘I cannot sleep and I’m constantly stressed. These pills provide some relief.’ The scholar prayed for his wellbeing and left.

Outside, he saw the road works in action. Large machinery was being used, causing a lot of noise. The scholar was surprised to see one of the labourers peacefully sleeping on a piece of card under the shade of a small tree. He wondered to himself: ‘A businessman sat inside the peaceful atmosphere of a shop with air-conditioning needs pills to get some peace yet, outside the shop, a poor labourer manages to sleep peacefully despite the intense heat and loud noise. Truly, Allah is great.’

People who only remain busy in improving their life in this world are usually surrounded by a myriad of problems, no matter how wealthy they are or how much of a luxurious life they appear to have. Some of these people face problems that deprive them of peaceful sleep at night and peaceful lives during the day. The minds of such people are constantly overwhelmed by worldly concerns such as how to meet a deadline; how to plan for another project; and how to expand the business. They are in a perpetual cycle of buying and wanting and overcome with paranoia of being outdone by competitors. This frame of mind is further propelled by materialistic wonts that, due to ever-changing trends, never seem to be satiated. Such matters do not only affect the rich, but even those who live an average or poor lifestyle are affected by them according to their mindset. This causes their problems to increase as opposed to decrease.

Addressing those who have immersed themselves in worldly matters, The Ameer of ahl al-Sunnah ‘Allamah Maulana Ilyas Attar Qadiri دَامَـتْ بَـرَكَـاتُـهُـمُ الْـعَـالِـيَـه writes:

“People delve into unimportant worldly matters and grieve over them unnecessarily. Despite their daughters being very young, they overthink about their marriage and drive themselves crazy. Although Hajj may be obligatory for them, they postpone it, making the excuse that they will first get their daughters married. This is despite such people having no guarantee in life about whether they will live to see their daughters grow up. There is no guarantee that their daughters will live long enough to reach the age of marriage. Alas, many have left this world whilst worrying about it. They paid no attention to the Hereafter when they were alive. A Muslim should be courageous and have a positive approach,” (Adaab-e-Ta’aam, p. 385).

Why does someone who is absorbed in worldly affairs worry so much? What effects do such worries have on their mind and heart? The final Prophet of Allah صَلَّى الـلّٰـهُ عَلَيْهِ وَاٰلِهٖ وَسَلَّم of Allah Almighty has addressed these questions:

1.   ‘Whoever remains focussed [only] on this world, Allah عَزَّوَجَلَّ disarranges his affairs and places his poverty before his eyes. And he only receives from the world the share that was already written for him. And whoever is focussed on the Hereafter, Allah عَزَّوَجَلَّ settles his affairs for him and places his richness inside his heart. And the world comes to him covered in dust,’ (Ibn-e-Majah, vol. 4, p. 424, Hadith 4015).

3.   Some of Allah’s angels have been assigned to take care of the provisions of human beings. Allah عَزَّوَجَلَّ has informed them that the person whom they find to have forsaken all worries except one (the Hereafter), make the heavens, the Earth, the birds, and humans the guarantors of his provision. And whoever they find searching for provision, and in doing so has pursued the path of fairness and truthfulness, make his provision pure and easy for him. And whoever [in search of provision] exceeds the limits [of Shari’ah], leave him with his desires. Such an individual cannot pass the rank that has been decreed for him by Allah عَزَّوَجَلَّ, (Nawadir-ul-‘Usool, vol. 2, p. 1182, Hadith 1489; Mirqat-ul-Mafatih, vol. 1, p. 522).

4.   ‘Whoever focuses all his concerns on one thing, the Hereafter, Allah عَزَّوَجَلَّ is sufficient for him in his worldly affairs. And the one whose worries revolve around worldly matters, it will not matter to Allah عَزَّوَجَلَّ in which valley he dies,’ (Ibn-e-Majah, vol. 4, p. 425, Hadith 4106).

It is my request that instead of overthinking about bettering the life of this world, ponder over the difficulties and trials of the grave and the Hereafter. Rather than making this world your paradise, think about making your grave a garden of Paradise. As opposed to investing your efforts in obtaining worldly luxuries and ease, reflect on attaining the everlasting blessings of the Hereafter. To accomplish this, the religious environment of Dawat-e-Islami is a powerful vehicle. Attach yourself, your family, and your children to this pure environment. Live your life according to the booklet entitled 72 Pious Deeds, and اِنْ شَــآءَالـلّٰـه you will develop a focus on the Hereafter. 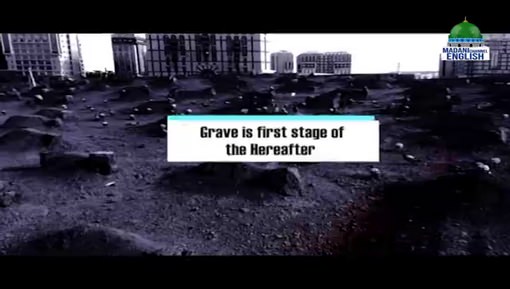 Grave is first stage of the Hereafter