The Dirt of Wealth - Zakat

The Story of Little Zayd

The Dirt of Wealth

After praying Maghrib salah, Little Zayd and grandfather went to the marketplace. Grandfather then made his way to the poultry shop. After reading the list of prices, he pointed towards a chicken in one of the cages and said, ‘Brother Saleem, weigh this chicken.’

The shopkeeper weighed the chicken, which was 2.5kg, and then slaughtered it. He gutted the chicken, throwing away some of the organs. Then, he butchered it into small pieces. As grandfather gave the money, he said: ‘Brother Saleem! How much does it weigh now?’

Brother Saleem checked the weight, and it now weighed only 1.75kg. Little Zayd stood observing. He was surprised how it weighed 750g less than the original 2.5kg.

When they returned home from the marketplace, grandfather said: ‘Little Zayd, take this meat to your mother. Ask her to clean it thoroughly before cooking it.’

Grandfather explained: ‘Son, there were feathers and other things that cannot be eaten. Therefore, they were removed, and the chicken was cleaned and cut into pieces. There is nothing to be shocked or worried about. Haven’t you seen how we buy watermelons from the shop and throw away its rind? We don’t feel sad about it, do we? Likewise, we throw away banana skin and the rind of cantaloupes without second thought.’

Grandfather saw Little Zayd understand that unclean things are removed so that the clean parts can be used. Continuing the conversation, grandfather said: ‘Yesterday in the masjid, the imam was speaking about how Muslims must give zakat. This is the dirt of wealth. Taking out 2.5% from your wealth will make the rest of the wealth clean and pure.’

After hearing this, Little Zayd asked, ‘Is zakat the dirt of wealth?’

Grandfather replied: ‘Yes! Zakat is thought of as the dirt of wealth. Giving away zakat purifies the rest of someone’s wealth. However, it is halal for the poor to take zakat if required, just as it is halal for other people who are entitled to take it.’

Little Zayd was interested in learning more about zakat, and so he asked his grandfather some questions. Grandfather used to read Islamic literature, sit with scholars and always listen to the Madani Muzakara. Hence, he was able to answer Little Zayd’s questions.

Little Zayd: ‘When did it become necessary to pay zakat?’

Little Zayd: ‘What happens if somebody does not pay zakat?’

Grandfather: ‘Anyone who delays its payment without a valid reason is sinful. Anyone who says zakat is not necessary is no longer a Muslim.’

Little Zayd: ‘What are some of the benefits of paying Zakat?’

2.   By paying Zakat, wealth is protected.

3.   Paying zakat removes the problems wealth can cause.’

Little Zayd: ‘Can you please tell me some of the harms of not paying zakat?’

1.   ‘A person will not receive the benefits that I just told you before.

3.   Not paying zakat leads to person losing his wealth. The Prophet صَلَّى الـلّٰـهُ عَلَيْهِ وَاٰلِهٖ وَسَلَّم said: “The wealth lost during wetness or dryness is because of not paying Zakat.”’[2]

The time for the Isha salah was near. So, grandfather ended the conversation. Placing his hand on Little Zayd’s head, he said: ‘This is enough for today Little Zayd. Memorise what you have learnt and gain reward by sharing it with others.’

Little Zayd: ‘I will try my best to memorise what we spoke about, grandfather.’

Grandfather: ‘Let’s go to the Masjid to pray.’

In the evening, Mother got the beds in the guest room ready. Big Sister was feeding Aunt’s daughter,

Little Zayd quickly put on his school uniform and rushed to the kitchen. “If you finish your breakfast,

After praying Maghrib salah, Little Zayd and grandfather went to the marketplace.

On the land behind Uncle’s house, there was a garden that belonged to both uncles. When little Zayd arrived,

The car had entered the village and was travelling slowly on the dirt road between green fields.

Little Zayd was very happy because his new bike was due to arrive. A few months ago, Little Zayd saw a beautiful,

At home, after a long day at school, Little Zayd put his bag on the table and rushed to Mum in the kitchen. ‘Mum!’ he cried, ‘didn’t I tell you?’

Little Zayd returned from school and quickly zoomed into his room after giving Salam to his family.

‘Mum, how much longer will it take?’ said a hungry Little Zayd as he rubbed his stomach. 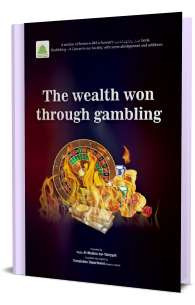 The Wealth Won Through Gambling