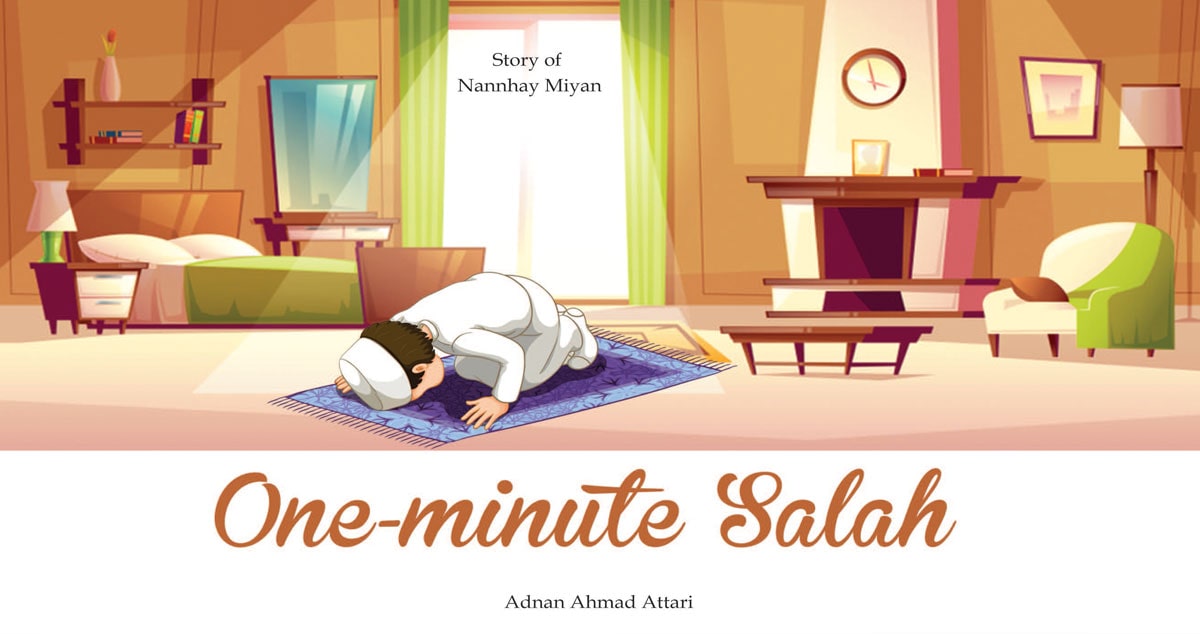 Nannhay Miyan said: It is alright! I am just getting back within a minute.’ Saying this, Nannhay Miyan rushed off.

The grandmother surprisingly said: What type of Salah is this which is being performed within a minute! Upon seeing ‘Saleem’ entering the room, the grandmother said to him: Have a seat Saleem; your friend is coming, he is performing Salah right now. You have performed ‘Asr Salah, haven’t you? Saleem replied to the grandmother: Yes, I have performed it.  Nannhay Miyan’s mother asked: would you like to drink tea?

Saleem humbly said: No Aunty! Thank You! I have already drunk tea. Nannhay Miyan turned up after a while and headed towards the exit door with Saleem.

The grandmother asked Nannhay Miyan’s mother: Has he really performed Salah? The Mother humbly replied: It seems he has performed Salah quickly due to the strong desire of playing cricket.

My dear daughter! How can one perform ‘Asr Salah in just a minute? Then the grandmother called Nannhay Miyan: Nannhay Miyan! Listen to me before leaving.

Making a space on the bed for Nannhay Miyan, the grandmother politely asked him: How did you perform four Rak’aat of Asr Salah in just a minute?

Grandmother said: Well! Here is a Salah mat before you. Show us how you performed 4 Rak’aat Salah quickly. Nannhay Miyan immediately laid the ‘Salah mat’ and started performing Salah reciting اَللّٰەُ اَکْبَر and then he picked up such a pace that the grandmother got extremely worried and held her head in her hands because Nannhay Miyan looked like doing some fast-paced exercise. So, in this way, one after another, he completed the 4 Rak’aat Salah. Thereafter, Nannhay Miyan said proudly: ‘Dear grandmother! Did you see, it is done in a minute?’ As if he had achieved a great success.

The grandmother called him back and said while stroking him: My dear son! It is your assumption that you have performed Salah in a minute but you have made many mistakes during this Salah. So, it is not done correctly.

The grandmother said gently: It is necessary to perform Ruku’, both Sajdahs, Qawmah, Jalsah etc., calmly and peacefully. Haven’t I related you a parable about Sayyiduna Huzayfah رَضِىَ اللّٰهُ عَـنْهُ?

Nannhay Miyan curiously said: No dear grandmother! You have not done so as of yet.

Sayyiduna Huzayfah رَضِىَ اللّٰهُ عَـنْهُ said: You have not performed Salah for 40 years. If you had continued performing Salah in the same way [without completing Ruku’ and Sajdahs] until your death, you would have certainly died without following the religion of the Holy Prophet صَلَّى اللّٰهُ عَلَيْهِ وَاٰلِهٖ وَسَلَّم. Thereafter, Sayyiduna Huzayfah رَضِىَ اللّٰهُ عَـنْهُ taught that person the correct way of performing Salah. (Musnad-e-Ahmad, vol. 9, pp. 76, Hadees 23318)

In the evening, Mother got the beds in the guest room ready. Big Sister was feeding Aunt’s daughter,

Little Zayd quickly put on his school uniform and rushed to the kitchen. “If you finish your breakfast,

After praying Maghrib salah, Little Zayd and grandfather went to the marketplace.

On the land behind Uncle’s house, there was a garden that belonged to both uncles. When little Zayd arrived,

The car had entered the village and was travelling slowly on the dirt road between green fields.

Little Zayd was very happy because his new bike was due to arrive. A few months ago, Little Zayd saw a beautiful,

At home, after a long day at school, Little Zayd put his bag on the table and rushed to Mum in the kitchen. ‘Mum!’ he cried, ‘didn’t I tell you?’

Little Zayd returned from school and quickly zoomed into his room after giving Salam to his family.

‘Mum, how much longer will it take?’ said a hungry Little Zayd as he rubbed his stomach.