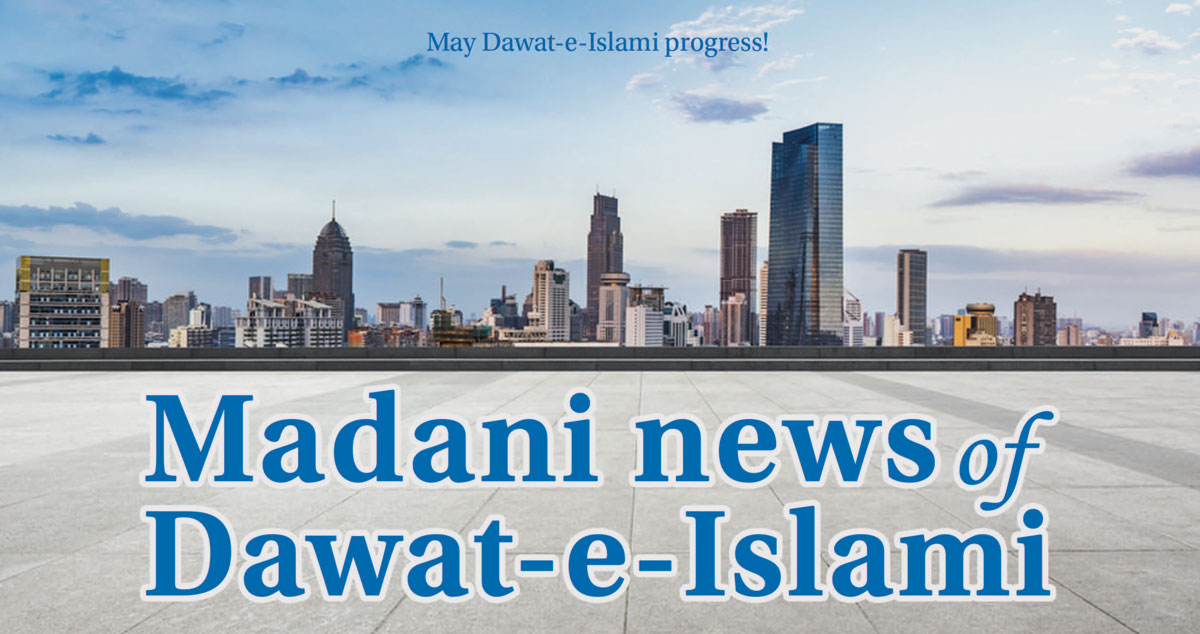 ٭  On 26th March, 2019, he visited Madani Markaz Faizan-e-Madinah, Faisalabad where a large number of Islamic brothers including VIPs met him.

٭  On 29th March, 2019, he met with the respected students of Jami’a-tul-Madinah in Lahore.

Schedule of Nigran-e-Shura in Punjab

‘Urs of Imam Ja’far Sadiq: On the occasion of the ‘Urs of Imam Ja’far Sadiq رَحْمَةُ اللّٰەِ تَعَالٰی عَلَيْه on the 15th night of Rajab-ul-Murajjab 1440 AH, a procession was organized followed by a Madani Muzakarah attended by a huge number of Islamic brothers. Afterwards, a feast was also served to attendees for Isal-e-Sawab.

Sayyiduna Ameer Mu’awiyah رَضِىَ اللّٰەُ تَعَالٰی عَـنْهُ was a companion of the Holy Nabi صَلَّى اللّٰەُ تَعَالٰى عَلَيْهِ وَاٰلِهٖ وَسَلَّم and a scribe of Divine revelation. On the occasion of his ‘Urs in the 22nd night of Rajab-ul-Murajjab 1440 AH, a procession was organized followed by a Madani Muzakarah. A feast was also served to attendees for Isal-e-Sawab.

In commemoration of the Ascension of our Beloved and Blessed Nabi Muhammad Mustafa صَلَّى اللّٰەُ تَعَالٰى عَلَيْهِ وَاٰلِهٖ وَسَلَّم, Ijtima’aat of Zikr and Na’at were held on the 27th night of Rajab-ul-Murajjab, 1440 AH in different cities including Bab-ul-Madinah, Karachi. Thousands of Islamic brothers attended these Ijtima’aat. A Madani Muzakarah was also held and a feast was also served to attendees. A considerable number of devotees of Rasool were also privileged to observe fast on 27th Rajab-ul-Murajjab.

A member of Shura, Maulana Abdul Habib Attari, inaugurated Noor Masjid in Korangi Karachi and another member of shura, Qari Saleem Attari inaugurated Jami’ Masjid Jamal-e-Mustafa in Tugluq Town Multan. Moreover, Faizan-e-Ahmad Raza Masjid in Gulistan-e-Jauhar and Jami’ Masjid Faizan Imam Hasan in Orangi Town were inaugurated as well. In addition, opposite the Minar-e-Pakistan in Lahore, a place was designated for Salah. Similarly, in an Indian city Godhra, the foundations of Faizan Ghaus-e-A’zam Masjid were also laid.

Efforts made by Majlis for shrines

The responsible Islamic brothers of Majlis for shrines attended the ‘Urs of several pious predecessors. One hundred and fifty devotees of Rasool in the form of twenty Madani Qafilahs also visited different shrines. Ijtima’aat were also held and were attended by over two thousand Islamic brothers.

Majlis for the protection of sacred papers

For the purpose of protecting sacred papers from desecration, Dawat-e-Islami has set up this Majlis which has placed over one hundred thousand boxes all over Pakistan. Over nineteen thousand responsible Islamic brothers have also been appointed. In Sultanpur near Multan, an affluent individual provided a place to this Majlis along with necessary furniture.

In 2018, six thousand four hundred and two (6402) male and female students from Madaris-ul-Madinah memorized the entire Quran and twenty five thousand two hundred and six (25206) students completed the recitation of the entire Quran. On 7 April, 2019, a degree-awarding Ijtima’ was held in which Nigran-e-Shura Maulana Muhammad Imran Attari delivered a Sunnah-inspiring speech.

Endeavours made by education department of Dawat-e-Islami

In the Federal Urdu University Karachi and N.E.D. University Karachi, Sunnah-inspiring speeches were delivered by the preachers of Dawat-e-Islami. A good number of professors and students attended these speeches.

Efforts made by Majlis for lawyers

The Nigran and other responsible Islamic brothers of the Majlis met with the judges, lawyers and other staff of various courts in Karachi. During the annual Milad gathering held in Judicial Complex Malir, a stall of Maktaba-tul-Madinah was set up and booklets were also distributed.

In Madani Markaz Faizan-e-Madinah Lahore, a Sunnah-inspiring Ijtima’ was held which was attended by homeopathic physicians, the principals, the vice-principals and the professors of medical colleges and by medical store owners.

A new campus of Dar-ul-Madinah was inaugurated in Satellite Town Rawalpindi. On this occasion, a member of Shura, Haji Waqar-ul-Madinah Attari, delivered a Sunnah-inspiring speech.

٭   By the blessing of the individual effort made by a preacher of Dawat-e-Islami, a non-Muslim embraced Islam in Sri Lanka in April, 2019. The new Muslim was named Muhammad Shaban.

٭   In Johannesburg, South Africa, a non-Muslim had the privilege of embracing Islam by reciting Kalimah through a preacher of Dawat-e-Islami. The new Muslim was named Mueenuddin.

In a Gulf State, on 2nd April, 2019, the Nigran of Shura Haji Muhammad Imran Attari delivered his speech in the night of the Ascension of the Holy Nabi صَلَّى اللّٰهُ تَعَالٰى عَلَيْهِ وَاٰلِهٖ وَسَلَّم among thousands of devotees of Rasool. Similarly, members of Shura Haji Muhammad Shahid Attari, Haji Abdul Habib Attari and Haji Muhammad Ameen Attari (responsible for Madani Qafilahs) recently travelled to different countries of the world and delivered Sunnah-inspiring speeches.

A degree-awarding Ijtima’ was held among the Islamic brothers of Jami’a-tul-Madinah and Madaris-ul-Madinah in Uganda. A similar Ijtima’ was also organized in Mombasa, Kenya in which degrees were awarded to 8 Islamic brothers who completed Dars-e-Nizami as well as to 26 students who learnt the entire Quran by heart. During these Ijtima’aat, local Islamic scholars and a huge number of devotees of Rasool were also present.

Introduction to Dawat-e-Islami in conference

Last month, responsible Islamic brothers and other preachers of Dawat-e-Islami met with over 2300 Islamic personalities including Islamic scholars, saints and Imams. The names of some of those personalities are as follows: Grandson of A’la Hadrat, Maulana Muhammad Tasleem Raza Khan from Barely India; Sayyid Ghulam Hussain Shah Jeelani from Rajasthan India and the teacher of scholars Mufti Muhammad Fazl-ur-Rahman Bandyalvi from Dera Ismail Khan.

An Ijtima’ was held in Tonsa Shareef for the Isal-e-Sawab of Sardar Fateh Muhammad Khan Buzdar who was the father of Punjab Chief Minister Usman Buzdar. A member of Shura Qari Saleem Attari delivered his Sunnah-inspiring speech.

During the months of February and March, 2019, 3-hour Madani In’amaat Ijtima’aat were held in various cities of Pakistan. Overall, more or less 1409 Islamic sisters attended these Ijtima’aat in which they were motivated to lead their life following 63 Madani In’amaat.

Majlis for guideline on funeral rites

Under the supervision of this Majlis, Ijtima’aat were held in various cities of Pakistan and more or less sixteen thousand five hundred and eighty seven (16567) Islamic sisters attended these Ijtima’aat.

Efforts made by education department of Dawat-e-Islami

On 25th March 2019, Sunnah-inspiring Ijtima’aat were held among female medical professionals at six different places in Karachi. The honourable daughter of Ameer-e-Ahl-e-Sunnat and other female preachers of Dawat-e-Islami delivered their speeches which were attended by a large number of lady doctors, female health workers, female medical students and paramedical staff.

٭   On 7th February, 2019, 12-day “Character-reforming courses” were started by Majlis Short Courses (for Islamic sisters) at 104 places worldwide includingUK, America, Oman, India and New Zealand. More or less 2919 Islamic sisters attended these courses. The duration of the course was 63 minutes on a daily basis.

٭   In Sydney, Australia, Madrasa-tul-Madinah for mature Islamic sisters has also been inaugurated.

The supervisor of the Department of Scholarly Relations, Maulana Hafiz Afzal Attari Madani,

On the 7th of September, the movement of the devotees of the Prophet, Dawat-e-Islami, celebrated the Day

It was probably in 1978 that a 28-year-old man used to lead Salah at Noor Masjid in the old city area of Karachi.

Along with teaching Muslims about their faith and supporting their spiritual growth, Dawat-e-Islami

Over one hundred non-Muslims accepted Islam in the opening ceremony

Ever since the founding of Dawat-e-Islami, it has not lagged for even a moment, Ameer of Ahl-us-Sunnah

Madani news of the departments of Dawat-e-Islami