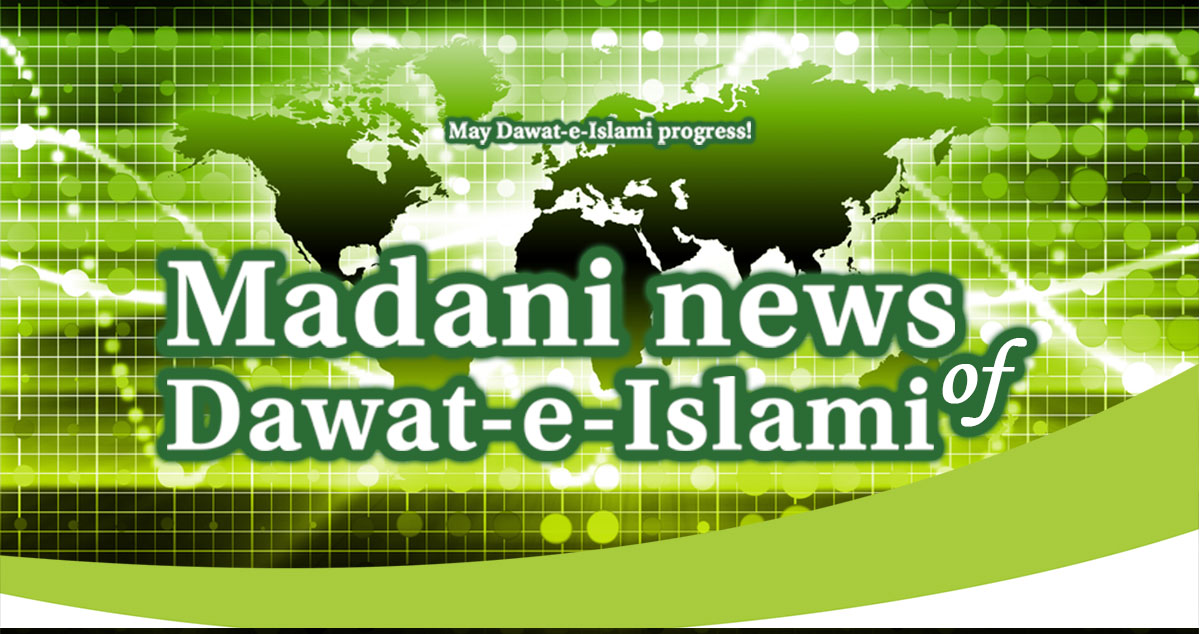 Madani news of the successor of Ameer-e-Ahl-e-Sunnat

In December 2018, blessed son of Ameer-e-Ahl-e-Sunnat performed Nikah of the following Islamic brothers:

٭   Training of ‘teaching’ and ‘non-teaching staff’ of Dar-ul-Madinah was held last month. While giving Tarbiyyat (training) to them about manners of talking, Haji Muhammad Shaahid Attari, Nigran of Pakistan Intizami Kabinah said, ‘Nigran and his subordinates should always take care of self-respect of each other and should work together so that institution becomes stable and powerful’.

Madani parables of (people) embracing Islam in the African continent

٭ A non-Muslim embraced Islam on 14th December 2018 in Jaami’ Masjid Rahman (Uganda). He was given an Islamic name ‘Abdul Qaadir’.

٭ On 11th January 2019, a non-Muslim embraced Islam in Tanzania; he was given an Islamic name ‘Muhammad Yusuf’.

From 27th December 2018 to 16th January 2019, Nigran of Markazi Majlis-e-Shura, Maulana Muhammad Imran ‘Attari مُدَّظِلُّہُ الْعَالِی travelled to UK where he presided Madani Mashwarahs with responsible Islamic brothers in Birmingham, Derby, Leicester, London, Oxford, Manchester, Rochdale, Blackburn, Bradford, Glasgow and Dundee. He met honourable Islamic scholars and Mashaaikh (spiritual leaders) and dignitaries. In different Ijtima’aat and Madani Halqahs, Nigran-e-Shura gave Madani pearls to the students and teachers of Jami’aat and Madaris-ul-Madinah, responsible Islamic brothers of UK and the Islamic brothers from different walks of life. Nigran-e-Shura also inaugurated a Masjid in Dudley (Birmingham) (earlier, this was a worshipping place of non-Muslims). Ameer-e-Ahl-e-Sunnat دَامَتْ بَرَكَاتُـهُمُ الْعَالِيَـه named this Masjid ‘Faizan-e-Farooq’. Along with performing congregational Salah, other Madani activities will also be carried out in this Masjid, اِنْ شَـآءَ اللّٰہ عَزَّوَجَلَّ.

Opening of Madani Markaz in France

In November 2018, a Madani Markaz of Dawat-e-Islami, ‘Faizan-e-Madinah’ was inaugurated in Paris (France) where Quranic education is being provided to Madani children along with performing Salah with Jama’at.

On 12th and 13th January 2019, under the supervision of Majlis Dar-ul-Madinah, 2-day Sunnah-inspiring Ijtima’ namely ‘Vision 2025’ was held in Haji Ali Nagar, Mumbai (India). A large number of Islamic brothers from 49 cities of India attended this Ijtima’. Rukn-e-Shura Muhammad Athar Attari gave Madani pearls to the attendees of Ijtima’. Remember! Until now, 8 campuses of Dar-ul-Madinah have been established in the following cities of India: Mumbai, Tajpur, Akola, Rahmat Nagar, Himatnagar, Nagpur and Ahmedabad.

In this current year, 6 new campuses will be opened soon in the following cities of India: Delhi, Agra, Pune, Rajori, Gujarat and Jummu Kashmir.

On 28th December 2018, a 12-day ‘Faizan-e-Namaz Course’ was held in Maputo (Mozambique). Approximately 25 local Islamic brothers had the privilege to attend this course.

Responsible Islamic brothers of Majlis Rabitah Dawat-e-Islami met more or less 1220 political and social dignitaries last month. Names of some of them are as follows:

٭ In Dera Allahyar, at the demise of tribal dignitary Abdul Ghaffar Khosa, Rukn-e-Shura Haji Yafoor Raza Attari met the heirs of the deceased and expressed his condolence to them.

٭ At the demise of the mother of M.P.A ‘Dr. Afzal’ (Head Rajkan District Bahawalpur) and the uncle of Mahr Mansoor Hayat Luk (Sargodha), responsible Islamic brothers of Majlis Rabitah of Dawat-e-Islami met them and expressed their condolence to them.

٭ An Ijtima’ of Zikr-o-Na’at was held under the supervision of Dawat-e-Islami on the occasion of the Chehlum of Dr. Muhammad Aslam Khan, father of ‘Ahmed Khan’, the Coordinator to Prime Minister, in which Nigran of Majlis Rabitah delivered Sunnah-inspiring Bayan and met different social and political dignitaries.

٭   Under the supervision of Majlis Mukhtasar (short) Courses, 19-day ‘Faizan Surah Al-Baqarah Course’ was held in Pakistan at 296 locations. Approximately 4013 Islamic sisters attended this course. By the blessings of these courses, a large number of Islamic sisters made intention to recite 3 Quranic Ayahs with translation and Tafseer (explanation) daily and studying in Madrasa-tul-Madinah lil-Banaat as well as attending weekly Sunnah-inspiring Ijtima’ and watching weekly Madani Muzakarah.

٭   Under the supervision of Education Department of Islamic sisters, a Madani Halqah was held in a private school situated in Bab-ul-Madinah, Karachi on 24th December 2018. Teachers, female students and the Islamic sisters of school staff attended this Madani Halqah.

٭   On 30th December 2018, under the supervision of the Islamic sisters of Majlis Rabitah, an Ijtima’ of Zikr-o-Na’at was held at the residence of an Islamic sister in Bab-ul-Madinah Karachi.

٭   On 6th December 2018, a Telethon Ijtima’ was held in a school situated in Attarabad (Jacobabad), in which teacher Islamic sisters gave Madani donations then and there.

Completed Quran in a short period of time

For mental and physical growth of students, extra-curricular activities along with co-curricular activities are also very important. So, keeping in view this fact, an activity day in Dar-ul-Madinah International Islamic School System was marked in previous days across Pakistan. Madani children took part in various activities wholeheartedly.

٭   Apart from this, the abovementioned courses were also held in the following cities of India: Mumbai, Pune, Balaghat, Nashik, Bandra and Kanpur etc.

٭   From 21st December 2018 Naazirah courses for Islamic sisters were held in the following cities of India: Gujarat, Modasa, Kolkata and Tajpur. Over 450 Islamic sisters attended all these Madani courses.

٭   Under the supervision of Majlis Tajheez-o-Takfeen, Tajheez-o-Takfeen Ijtima’aat were held in Auckland (New Zealand) and the following cities of India including Europe and UK: Kanpur, Allahabad, Shivpur, Bhadohi, Pratapgarh, Bhilwara and Howrah etc. Approximately 1157 Islamic sisters attended these Ijtima’aat.

٭   In November and December 2018, 3-hour Madani In’amaat Ijtima’aat were held at many places of India including Mumbai, Delhi, Akola, Kota, Nagpur and Udaipur.

The supervisor of the Department of Scholarly Relations, Maulana Hafiz Afzal Attari Madani,

On the 7th of September, the movement of the devotees of the Prophet, Dawat-e-Islami, celebrated the Day

It was probably in 1978 that a 28-year-old man used to lead Salah at Noor Masjid in the old city area of Karachi.

Along with teaching Muslims about their faith and supporting their spiritual growth, Dawat-e-Islami

Over one hundred non-Muslims accepted Islam in the opening ceremony

Ever since the founding of Dawat-e-Islami, it has not lagged for even a moment, Ameer of Ahl-us-Sunnah

Madani news of the departments of Dawat-e-Islami