An excellent method of explaining something to someone is via examples, especially tangible examples to illustrate abstract ideas. The Holy Quran is replete with powerful examples and metaphors, and the greatest teacher of mankind—the Prophet صَلَّى الـلّٰـهُ عَلَيْهِ وَاٰلِهٖ وَسَلَّم —also employed examples, metaphors, and figures of speech to teach the Companions. The Imam of Ahl al-Sunnah, Imam Ahmad Raza Khan رَحْمَةُ الـلّٰـهِ عَلَيْه also adopts this fascinating approach in his literary work.

During Safar al-Muzaffar, 1440 AH, which marked the 100th anniversary of the great Imam’s passing, 22 examples from his works were shared in this regard, in the special issue Faizan-i-Imam-i-Ahl al-Sunnah. Similarly, a further six examples were given in the issue of Safar al-Muzaffar 1441 AH. Some more examples are now presented here from the work of Imam Ahmad Raza  رَحْمَةُ الـلّٰـهِ عَلَيْه .

1. Matters pertaining to Allah, His Messenger, and oneself

To show the significance of religious matters and how they should be prioritised over one’s personal matters, the Imam of Ahl al-Sunnah رَحْمَةُ الـلّٰـهِ عَلَيْه states:

It suffices a person’s faith to give at least the same attention to matters concerning Allah and His Messenger, as he does to his own personal matters. Observe how much effort a person puts in to have ownership of something as minor as a gutter or drain, or to even merely have access to it. He ensures to settle this matter without leaving any stone unturned, spends thousands upon it, and does not tolerate defeat before anyone.[1]

2. Love for the Prophet’s Companions and Ahl al-Bayt

The Imam of Ahl al-Sunnah teaches us to love the Prophet’s Companions عَـلَيْهِمُ الرِّضْوَانْ and protect our faith from those who speak ill of them. He states:

Muslims! Focus on Allah and His Messenger, and consider the following with hand on heart: if some people, without reason, made it their modus operandi ˹or religious tenet˺ to swear vilely at your parents day and night, would you cheerfully interact with them? Most certainly not! If you have any shame and humanity, and you think of your mother as your mother and your father as your father, the sight of these people would pain your heart and cause you to cry tears of blood. Be just for the sake of Allah! Is your father greater than Abū Bakr al-Ṣiddīq and ʿUmar al-Fārūq رَضِیَ الـلّٰـهُ عَنْهُمَا ? Is your mother greater than the mother of the believers, ʿĀʾisha al-Ṣiddīqa رَضِیَ الـلّٰـهُ عَنْهَا ? We are humble servants of Abū Bakr and ʿUmar رَضِیَ الـلّٰـهُ عَنْهُمَا , and, thanks to Allah, we are known as the sons of Lady ʿĀʾisha رَضِیَ الـلّٰـهُ عَنْهَا. If we do not behave with those who swear at them in the same way as we would behave with someone who swears at our parents or at us, we are indeed disloyal servants and unworthy sons. Faith demands that you are responsible for your choice.[2]

3. The example of wandering in gardens

The example of someone who ignores all the good things in a gathering and conveys only its bad elements, is said to be like the one who ignores an entire herd of sheep and returns with only the sheepdog. Commenting on a similar matter, Imam Ahmad Raza Khan رَحْمَةُ الـلّٰـهِ عَلَيْه explains:

The example of someone who reads a book with ill intent is like that of a swine in a garden: the fragrance of bright flowers permeates the air, flowers blossom, water cascades from fountains, and nightingales sing away. Yet, this swine has no interest in this pleasurable atmosphere. Instead, he is busy finding filth to feast on. The same can be said of the heretic; he is not concerned with the countless fine points found in a thousand-page book. Instead, he will selectively hold onto an incorrect sentence in the book which suits his needs but should not really concern him. This is something unique to him which even the swine did not have, for even the swine will feast on some filth, which is of concern to it, and yet this heretic does not even harbour regard for this.[3]

The matter would be clear if someone used a phonograph to record Zayd being mocked or his parents being insulted, and then played this back. Would this not have the same effect? How far is it from uprightness to not differentiate ˹between abuse hurled at oneself via a phonograph or directly˺ in matters that affect one personally, and yet offer interpretations to deem disobedience to Allah Almighty as something trivial?[4]

Thalj al-Ṣadr li Īmān al-Qadr is his treatise on the complex topic of destiny and human freewill. Hailed as a unique contribution to Islamic dialectics, it provides a clear example to explain the nature of destiny:

The question remains: since the honey, poison, and the person’s actions are created by Allah Almighty, why is the person held responsible for consuming the honey or poison? The Imam answered:

The person is held responsible because he was informed of the respective benefits and harms of honey and poison. Physicians of the highest calibre detailed this to them. Now, the person had control over his hands, mouths, and what goes inside it. He was given eyes to see and intellect to understand. If the same hand that was used to drink poison was used to drink the cup of honey, Allah Almighty would have created the positive effects of this choice.

Later on, he further explains this example as follows:

This example and explanation are sufficient for someone who is fair. The bowl of honey is obedience to Allah, and the cup of poison is disobedience to Him. The intelligent physicians are the noble prophets  عَـلَـيْـهِمُ الـصَّلٰوةُ وَالـسَّـلَام . Guidance is the benefit reaped from the honey, for it will only be granted by the will of Allah. Misguidance is the harm of poison, for this is also subject to His will. Nonetheless, it is the obedient who will be rewarded while the disobedient will be reprimanded and punished.”[5]

Allah Almighty has prepared a terrifying and frightening location in the Hereafter to punish the disbelievers,

During Safar al-Muzaffar, 1440 AH, which marked the 100th anniversary of the great Imam’s passing,

Allah Almighty has prepared a majestic place as a reward in the Hereafter for His righteous servants.

Al-Hidāya is a central and relied upon work in the Hanafi school of jurisprudence. Initially, the author,

May Allah Almighty keep him fresh who hears any of my hadith, and remembers it, to the extent that he conveyed it (to others).

Blessed by the Lord of the universe with great intellect and wisdom, the Beloved and Blessed Prophet Muhammad Mustafa

Friday is a special day, gifted to us by Allah Almighty.

From the foundational and significant sources constituting Islam’s Shari’ah, the blessed Hadees are of the most importance after the glorious Quran.
Read Article

Belief in the finality of Prophethood (i.e. that Prophet Muhammad صَلَّى الـلّٰـهُ عَلَيْهِ وَاٰلِهٖ وَسَلَّم is the last of the Prophets and that no prophet will be sent after him)
Read Article

Dear Islamic brothers! The precious treasure of knowledge did not reach us without effort.
Read Article

‘many names of anything indicates its greatness and glory.
Read Article

There are 365 days in a year. It is estimated that on a yearly basis
Read Article 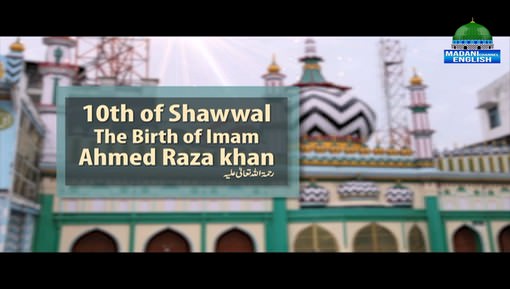