Get Sawab of The Hundred Martyrs 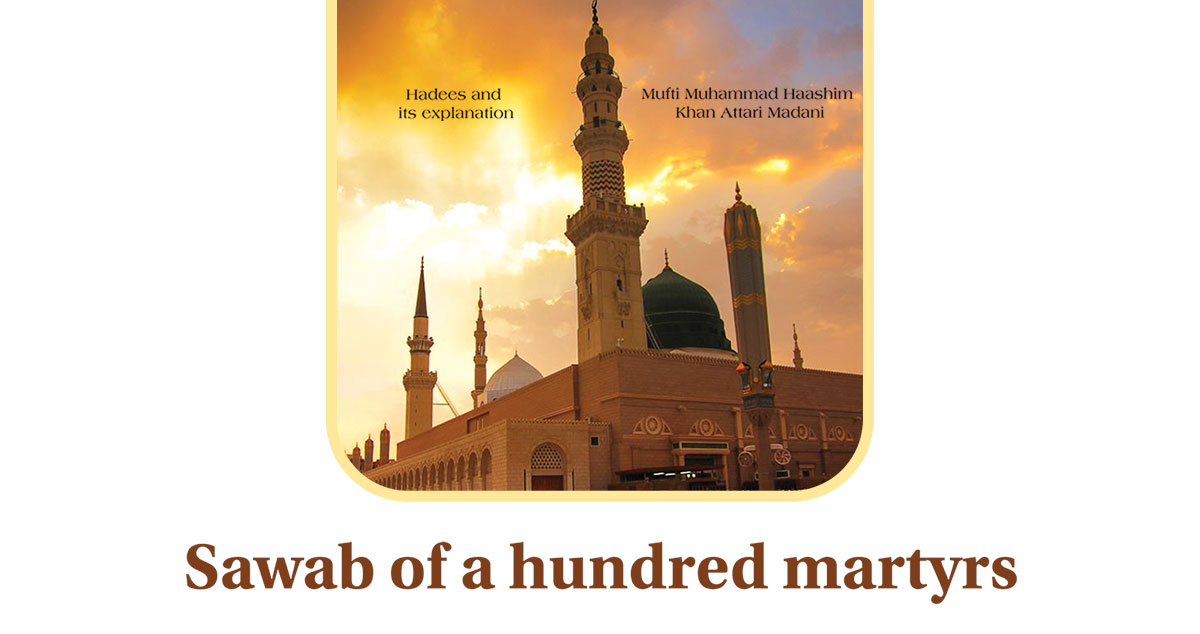 Translation: The one who will act upon my Sunnah at the time of Fasaad [discord] of Ummah will receive Sawab of a hundred martyrs. (Mishkat-ul-Masabih, vol. 2, pp. 55, Hadees 176)

In this blessed Hadees, it has been stated that the one who will act upon Sunnah at the time of Fasaad of Ummah, i.e. at the time when Bid’ah, ignorance and Fisq-o-Fujoor (sins) dominate, will receive the Sawab of a hundred martyrs. (Mirqat-ul-Mafatih, vol. 1, pp. 422, Taht-al-Hadees: 176)

The reason for receiving this Sawab is the difficulty which the person acting upon Sunnah at that time will face because of reviving Sunnah and acting upon it, so he is like the martyr who is martyred while making efforts to revive Deen. (Sharh-ut-Taybi ‘ala Mishkat, vol. 1, pp. 373, Taht-al-Hadees: 176)

In the blessed Hadees, Fasaad-e-Ummah (i.e. Ummah being Faasid) has been mentioned, Afsaad-e-Ummah (i.e. Ummah making Fasaad) has not been mentioned because it is more comprehensive and perfect; it is as if at that time, they will become Faasid [bad] so goodness will not at all be exhibited by them, no speech will benefit them, they will not leave the evil they will be committing and they will not carry out the virtuous deeds which they have been commanded. (Sharh-ut-Taybi ‘ala Mishkat, vol. 1, pp. 373, Taht-al-Hadees: 176)

Persuasion by A’la Hadrat about reviving a Sunnah

After mentioning this blessed Hadees, A’la Hadrat Imam Ahmad Raza Khan رَحْمَةُ اللّٰہِ  تَعَالٰی عَلَيْه has stated: And it is obvious that only that Sunnah will be revived which is no longer being practised, and it would only happen when the practice contrary to Sunnah becomes common. Reviving Sunnah is a special Fard (necessary act) for Islamic scholars which their post and status demands, and the ruling generally applies to any Muslim for whom it is possible. The Muslims of every city should revive this Sunnah (i.e. Azan being called out outside the Masjid) in their cities or at least in their Masajid and earn Sawab of a hundred martyrs. Moreover, the following objection cannot be made to it, ‘Wasn’t there any ‘Aalim before you!’ If this objection is considered to be correct, no one will be able to revive Sunnah. Ameer-ul-Mu’mineen Sayyiduna ‘Umar Bin ‘Abdul ‘Azeez رَضِىَ اللّٰہُ  تَعَالٰی عَنْهُ revived many Sunnahs. He رَضِىَ اللّٰہُ  تَعَالٰی عَنْهُ was praised for it; no objection was made such as, ‘There were Sahabah and Tabi’een (رَضِىَ اللّٰہُ  تَعَالٰی عَنْهُم) before you, [i.e. before your era]!

Translation: The one who has revived my Sunnah certainly loves me and the one who loves me will be with me in Jannah. (Sunan-ut-Tirmizi, vol. 4, pp. 309, Hadees 2687)

Translation: The one who revives my any Sunnah, abandoned by people after me will receive Sawab equal to [the Sawab of] all those who practise it and there will be no reduction in their Sawabs.

Allah’s support accompanies the person in accordance with his action. The reward of an action is doubled

The Prophet’s choice of words is unparalleled. In this hadith, three similar, yet slightly different,

We discussed the first two groups in the September 2022 edition of ‘Faizan-e-Madinah Monthly Magazine’.

Before Allah Almighty, no nation compares to the Ummah of the Prophet صَلَّى الـلّٰـهُ عَلَيْهِ وَاٰلِهٖ وَسَلَّم being the best.

There are a multitude of similar in books of hadith, which discuss showing mercy towards the young and respect towards elders.