Islamic Perspective on How to be Obedient

An Islamic perspective on obedience

The Prophet صَلَّى الـلّٰـهُ عَلَيْهِ وَاٰلِهٖ وَسَلَّم has stated: ‘اِنَّمَا الطَّاعَةُ فِى الْمَعْرُوف’, meaning, ‘Obedience is only required in matters of good.’[1] One should only be obedient in matters that are deemed good in Islam.[2]

Allah Almighty is our Lord and the Creator of the entire universe. He created everything in it through His might. Having the ability to perform good deeds and refrain from sins is granted by Him. Giving the command to carry out an action or to prohibit one from doing something is at His discretion. It is Allah Almighty Who ordered His people to obey Him and His beloved Prophet صَلَّى الـلّٰـهُ عَلَيْهِ وَاٰلِهٖ وَسَلَّم. The Quran states:

In this verse, Allah Almighty gives the command to obey Him as well as His Messenger صَلَّى الـلّٰـهُ عَلَيْهِ وَاٰلِهٖ وَسَلَّم.

The Prophet صَلَّى الـلّٰـهُ عَلَيْهِ وَاٰلِهٖ وَسَلَّم is loving and compassionate towards his ummah and provided it with guidance. As part of this guidance, he instated a principle: اِنَّمَا الطَّاعَةُ فِى الْمَعْرُوف’, meaning, obedience is only in virtuous actions. There is no obedience in matters of sin, as understood by the maxim لَاطَاعَةَ لِمَخْلُوْقٍ فِیْ مَعْصِیَةِ الْخَالِقٍ, meaning, it is impermissible to obey the creation in a way that involves disobeying Allah.[4]

Who should we obey?

People usually obey individuals belonging to certain groups. Some examples are as follows:

1.   Children obey their parents, and Islam requires them to do so. However, children must not obey their parents if they are ordered to lie, offend someone, earn haram, steal, rob others, accept bribes or slander. The same applies if parents tell their son to shave the beard or tell their daughter to ignore rulings of veiling.

2.   Students are required to obey their teachers. However, if a teacher orders a student to mock another student, cheat or assist in cheating, wrongly accuse or defame someone, or engage in immoral and sinful acts, then the teacher must not be obeyed.

3.   Employees and workers must listen to their supervisor and boss. They too, however, should not be obeyed if they instruct employees to abandon obligatory salah, miss the fasts of Ramadan, act maliciously to harm others or conspire against other workers to get them fired.

5.   Maintaining an amiable environment at home requires the husband and wife to have a good understanding, but if the husband tells his wife to not veil properly or do something impermissible, she should not act accordingly. The same applies if the wife tells her husband to disobey his parents or mistreat them. A husband and wife should only fulfil each other’s requests which are permitted in Islam.

6.   Most people around the world follow a leader of some kind. If their leader orders something, they passionately comply. However, a leader’s order should never be carried out if it involves high treason or putting the wealth or lives of others at risk.

7.   Many people passionately do whatever their friends ask of them, and this can lead to sins being committed. In most cases, being on the right or wrong path is largely determined by whether someone has good company or bad company. Good friends make a person good. Bad friends make a person bad. The Prophet صَلَّى الـلّٰـهُ عَلَيْهِ وَاٰلِهٖ وَسَلَّم said: ‘A man is upon the religion of his friend. So, you should be careful who you befriend.’[5] Hence, people should be wary of what their friends encourage them to do. A friend’s request should not be pursued in matters of sin. Examples include speaking about vulgar matters, taking or supplying intoxicating substances, wasting time in futile activities, harassing or mocking others, breaking ties with other friends, fighting and arguing, listening to or watching unlawful things, neglecting salah and leaving out good deeds. Only involve yourself in matters that bring you and your friends the goodness of this world and the Hereafter.

There are many other examples in which people are required to obey others. In short, only those things that come under the category of اِنَّمَا الطَّاعَةُ فِى الْمَعْرُوف should be pursued. Meaning, when deciding if you should comply with a request, consider whether the act being ordered is something that is right or wrong. Being considerate of such matters will lead to many wrongdoings ending, the development of cordial relations and people living peaceful lives.

May Allah Almighty allow us to follow the way of the Prophet صَلَّى الـلّٰـهُ عَلَيْهِ وَاٰلِهٖ وَسَلَّم, distance ourselves from wrong and give us the ability to perform virtuous actions. اٰمین

A man will continue to lie and he will pursue his lie to the extent that, in the court of Allah Almighty,

Allah Almighty sent His final Prophet صَلَّى الـلّٰـهُ عَلَيْهِ وَاٰلِهٖ وَسَلَّم as a mercy to the universe, and it is this mercy that

‘The best among you is the one who is the best to his family, and I am the best from you to my family,’

This hadith explains that two blessings are worthy of being sought: charity and knowledge, 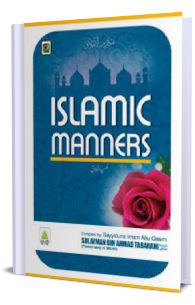