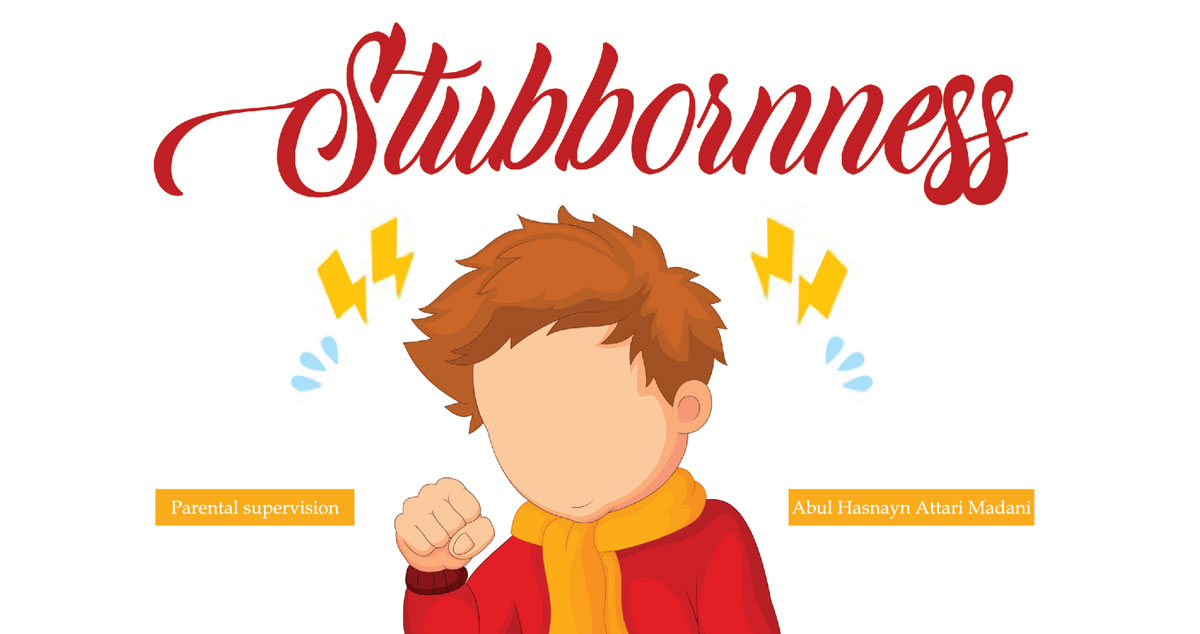 Childhood is a beautiful part of human life. During childhood, the correct upbringing of children and reforming their bad habits into good ones in an excellent way make them productive members of society.

On contrary, during childhood, when parents show carelessness by overlooking the bad habits of children and pampering them in their choosy and self-concerned attitude, it results in trouble and suffering for the children and their guardians in future.

Stubbornness is also one of the habits of children which need reformation. Children usually are stubborn but this habit is excessively ingrained into some children. It can be understood in this way that if a child demands for the moon to play with it, parents have to fulfil even such type of demand. The stubbornness of children becomes an embarrassment for parents when children start showing it in the presence of guests, hosts or other people and end up in crying for not getting their ways. On such occasion, only those who have faced this situation can have an idea about it.

The stubbornness of children can be divided into 2 basic types.

1. Fulfilling of which is impermissible as per Shari’ah.

2. Fulfilling of which is permissible as per Shari’ah.

If a child shows stubbornness for such kind of demand which is impermissible and sinful as per Shar’iah, it cannot be fulfilled in any condition. Though a non-Baaligh child is not bound to follow Shar’iah but the parents who fulfil such demand become sinner, plus the child whose such demands are fulfilled can become fearless in future in adopting the acts contrary to Shar’iah; so, parents should adopt a tactful strategy to control their children without fulfilling their impermissible demands.

If a child demands any such thing which is not forbidden as per Shar’iah, parents should act upon according to the situation. Remember! Immediately fulfilling every demand of a child or rejecting it, both are inappropriate. So, parents should fulfil the demand of a child from time to time but tactfully make him also habitual of listening to ‘refusal’. The act of fulfilling every permissible demand plays an important role in spoiling children.

If the fulfilment of children’s demand is made conditional to the ‘Madani fees’ i.e., ‘different virtuous acts’, then hopefully, the good upbringing of children, on this method, can also be done. Persuade children in this way, for example:

٭If you want such and such a thing for eating, recite Salat-‘Alan-Nabi [Durood] 50 times daily.

٭If you want to play on the swing, perform Salah five times a day for certain days.

٭If you want such and such a toy, watch Madani Channel daily for 26 minutes for certain days.

Parents should fulfil their promise when they receive Madani fees. Resultantly, through this way, اِنْ شَـآءَ اللہ عَزَّوَجَلَّ children will become habitual of performing different virtuous deeds without noticing it.

O our beloved Allah عَزَّوَجَلَّ! Grant us Taufeeq (ability) to give correct upbringing to our children and make our children a means of Sawab-e-Jariyah [perpetual rewards] for us. 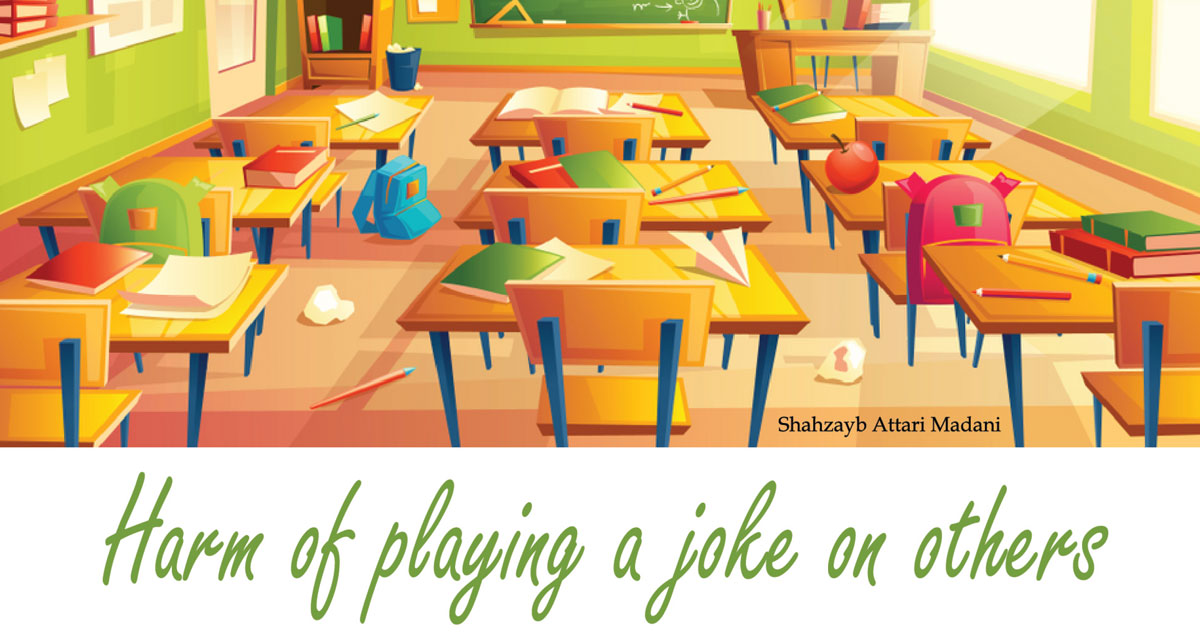 Principal Sahib was on a routine round in school. When he walked past 8th class, he noticed that students were throwing things to one another. Seeing this he entered the classroom. Upon seeing Principal Sahib in the class, all students stood up in respect.

Principal Sahib: ‘Who is the monitor of this class?’

Raising his hand, Ali Raza humbly said: ‘Sir! I am the monitor of this class.’

Principal Sahib: ‘Ali Raza! You are the monitor of this class. What is this going on in your presence? If a visitor had come and seen all of you in this state, what would he have thought about it?’

Ali Raza: Sir, I prevented them but they did not refrain (from having fun). They made me silent by saying, ‘Teacher is not in the classroom, so, we are not fighting here but rather having fun with one another’.

Principal Sahib: ‘No one knows when such fun turns into a fight. A short time ago, two students namely ‘Bilal’ and ‘Arshad’ used to study in this school. They were not only good friends but also they were neighbours. Both would go to school together, they would eat together during break time. As time goes by, their friendship kept growing. One day, when both were busy eating during break time, Bilal thought to play a joke on Arshad. He came out of the classroom on some pretext and came back with a glass full of water and poured it on Arshad.’ Arshad was also quick to respond, he threw the things placed in front of him at Bilal, causing food stains on his uniform. Having seen this, Bilal flew into a rage, he started quarrelling with Arshad. The joke followed by this fight led to a serious injury when Arshad was got hit so badly in his eye that it started bleeding. Arshad was rushed to the hospital immediately by school management. After check-up and tests, it was learned that Arshad was left blind in one eye.’

Waqas: ‘So what happened to both of them?’

Principal Sahib: ‘Both of them were expelled from the school. Dear children! Remember! If a teacher is not present in the classroom, do not indulge yourselves at all in the activities such as playing a joke on one another, throwing things at one another, fighting etc., lest anybody else like Arshad loses his eye while joking on others.’

Hamzah: ‘Sir! What should we do in a free period?’

Principal Sahib: ‘Considering your time to be valuable, revise your previous lessons, do scholarly discussion, share your general knowledge with one another and make this time more valuable by doing Zikr of Allah عَزَّوَجَلَّ and reciting Salat-‘Alan-Nabi (Durood). It means to engage yourself in any such type of activity which is beneficial to you from a knowledge point of view. Playing a joke on someone may hurt his feelings. Remember! Hurting someone’s feeling is an act of major sin, a Haraam act and an act leading to Hell. We should refrain from it.’

After listening to the Principal Sahib, students ensured him that they would not indulge in any such kind of activity even not while having fun; they would not waste their time in the absence of teacher but rather they would try to strengthen themselves from a knowledge point of view.

Principal Sahib: May Allah عَزَّوَجَلَّ keep all of you happy and grant you success in your noble aims. Saying this, he came out of the classroom

Children are gifts from Allah for which parents have a duty of care. Parenting is an art that has to be learned,

The Prophet صَلَّى الـلّٰـهُ عَلَيْهِ وَاٰلِهٖ وَسَلَّم was sent as a mercy and a teacher to teach mankind how to live with honour and civility.

Every word of the beloved Prophet صَلَّى الـلّٰـهُ عَلَيْهِ وَاٰلِهٖ وَسَلَّم is beautiful and unique, and every supplication of his is answered.

Children are experts in using touchscreens but are becoming less creative and geared towards physical activities.

All parents love their children and want them to grow up as fine, upstanding members of society

aFor young children, parents take a great deal of care to protect them against physical and spiritual harms.

The passion for reciting and teaching the Quran is at its peak in Ramadan. In this month, one should pay

The society we live in is predominated by sin more than virtue. One of these sins is that many a time,

Dear parents, without a doubt, you would not wish for your children to grow older and face inconvenience

Children are a reflection of their parents, as the character and conduct of parents has a direct impact on them.