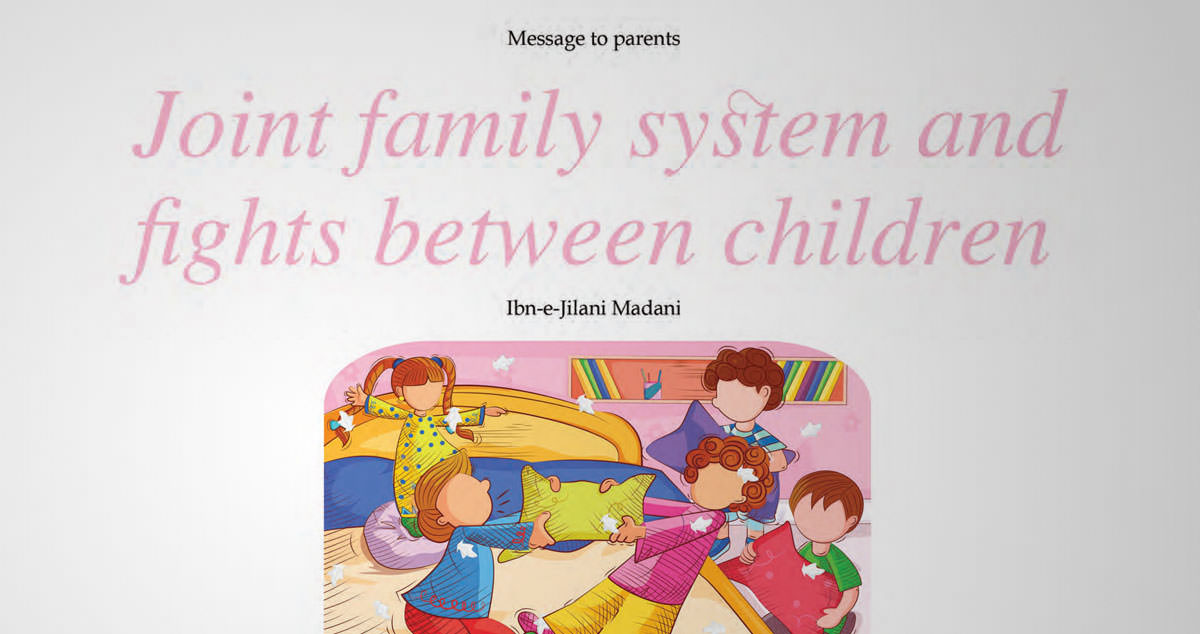 Joint family system is quite common in many families in our society. There are many benefits of joint family system but at the same time, there are its few side effects as well. These side effects are actually insignificant, but sometimes they have a deep impact due to our reaction towards them. ‘Fights between children’ is one of such issues which will be discussed in this article.

Living in a joint family system, children sometimes beat or harm one other while playing or fighting. Along with showing patience, parents should act wisely in such situations. They should keep in mind that children’s conflicts are temporary. They only focus on the present moment. If parents do not interfere at such occasions, children start playing together again after a short while. On the contrary, reacting to such situations vice versa will not only harm the parents but the children as well because such matters get worse if not ended then and there. A few beneficial tips are as follows:

1.   Firstly, all the children of a house should be brought up by giving them the mindset of living together with affection and unity. In particular, elder kids should be encouraged to look after their younger siblings and cousins. Children should not be allowed to treat one another rudely while playing.

2.   If situation does not get too serious in children’s fight, parents should ignore it because children’s next step depends upon the parents’ reaction to the situation. They learn from parents. If parents exaggerate a petty issue, children will do the same next time because it is generally observed that children initially make it up with each other, but due to such persistently adverse reaction of parents, they too develop hatred against each other.

3.   Parents should develop their own as well as children’s mindset: Since we are all together, we are all one family. As fight between siblings is not made a big issue, the same attitude should be adopted with cousins too.

4.   If it becomes necessary for parents to get involved in children’s fight, parents should behave wisely rather than being on someone’s side. Moreover, instead of giving special attention to a particular child, they should listen to everyone. Then, they should correct the children and explain to them as the situation demands.

5.   Our attitude also becomes the reason for children’s fight as sometimes we give comparatively more attention to one child based on his intelligence level or gender, and have cold attitude towards the other child. In this case, the ignored child takes revenge for our cold behaviour from other children. Similarly, sometimes a child takes unfair advantage of being close to us. Therefore, we should pay great attention to our own attitude to keep children away from fighting.

6.   Parents should also be mindful of the fact that media and other resources have made majority of children quite clever and sharp. Those times are gone when it was said that ‘children speak from their heart’. Therefore, no action should be taken merely on their statements, but rather parents should investigate it themselves whether it is actually the case or children have united against one child and are making up false statements.

Remember that in a joint family system, you should treat all the children like your own children. However, do not disappoint your own children by partiality and giving unfair advantage to other children. Similarly, supporting your children at their mistakes can spoil them. Therefore, such cases should be dealt with moderation, after pondering over them peacefully. Adopting the attitude of ignoring [the mistakes of children] at times, sometimes verbally explaining to them, and sometimes disciplining them will produce positive results, اِنْ شَــآءَالـلّٰـه.

Children are gifts from Allah for which parents have a duty of care. Parenting is an art that has to be learned,

The Prophet صَلَّى الـلّٰـهُ عَلَيْهِ وَاٰلِهٖ وَسَلَّم was sent as a mercy and a teacher to teach mankind how to live with honour and civility.

Every word of the beloved Prophet صَلَّى الـلّٰـهُ عَلَيْهِ وَاٰلِهٖ وَسَلَّم is beautiful and unique, and every supplication of his is answered.

Children are experts in using touchscreens but are becoming less creative and geared towards physical activities.

All parents love their children and want them to grow up as fine, upstanding members of society

aFor young children, parents take a great deal of care to protect them against physical and spiritual harms.

The passion for reciting and teaching the Quran is at its peak in Ramadan. In this month, one should pay

The society we live in is predominated by sin more than virtue. One of these sins is that many a time,

Dear parents, without a doubt, you would not wish for your children to grow older and face inconvenience

Children are a reflection of their parents, as the character and conduct of parents has a direct impact on them.